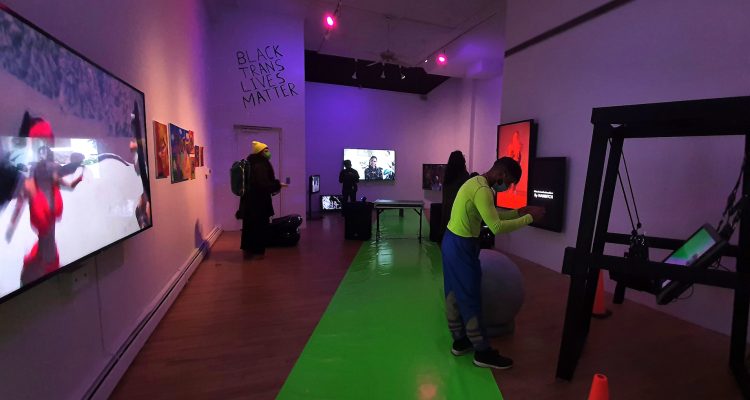 Artist Spotlight with After Party Collective

ArteEast is pleased to present an interview with After Party Collective (Vidisha-Fadescha and Shaunak Mahbubani) as part of our Artist Spotlight series.

After Party Collective, formed by artist-curator duo Vidisha-Fadescha and Shaunak Mahbubani, acts in the intersections between curatorial and performance practices. Expanding the Party as a site for critical praxis they produce spaces of embodied thinking to create momentum towards affirmation of trans*, intersex, and other gender-deviant bodies. Through recent projects — Queer Futures Potluck Party held at Goethe-Institute/ Max Mueller Bhavan New Delhi, video work Some Dance to Remember, Some Dance to Forget, Trans* Futures Archive at ISCP NY, Party at the End of Gender Normativity at Wienwoche Vienna 2021, TRANS* DANCE REVOLUTION at apexart NYC, and upcoming publication co-edited with Party Office Consent of the Governed: Race, Kink, and Constitution— they are energizing choreographies of collectivity, agency, legality, and pleasure. 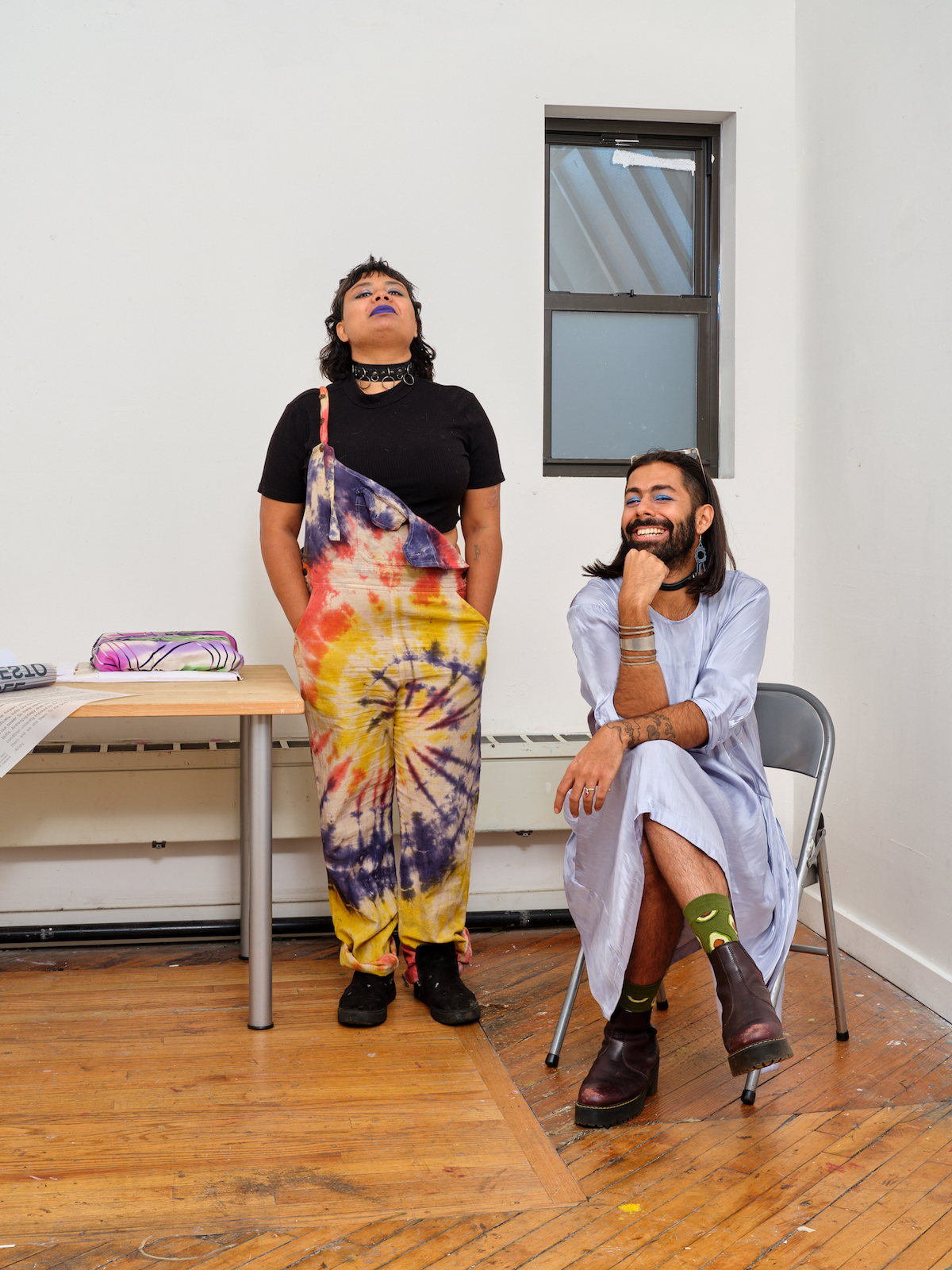 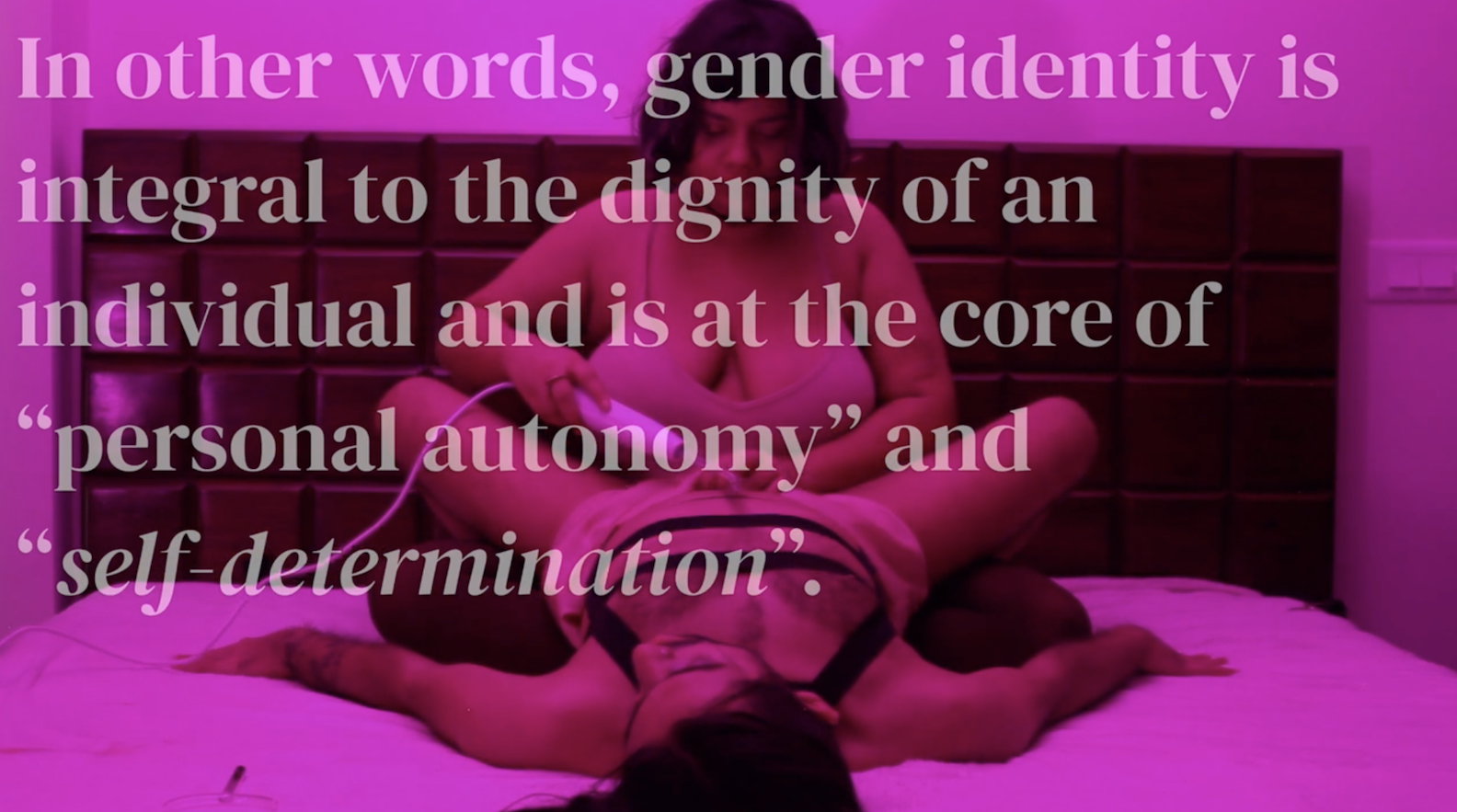 After Party Collective,
“some dance to remember, some dance to forget” (still), 2020, Video, 8 minutes, 54 seconds 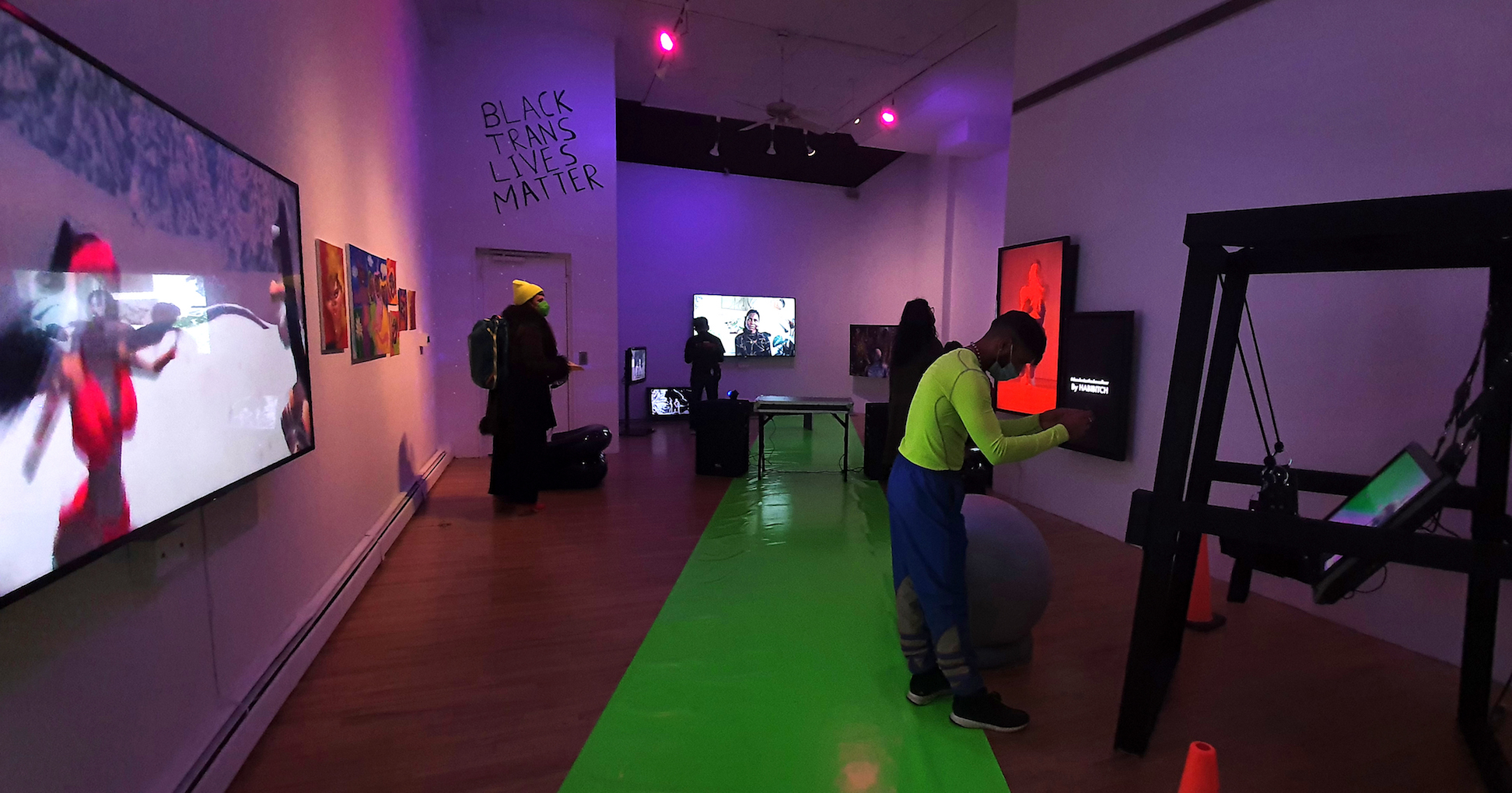 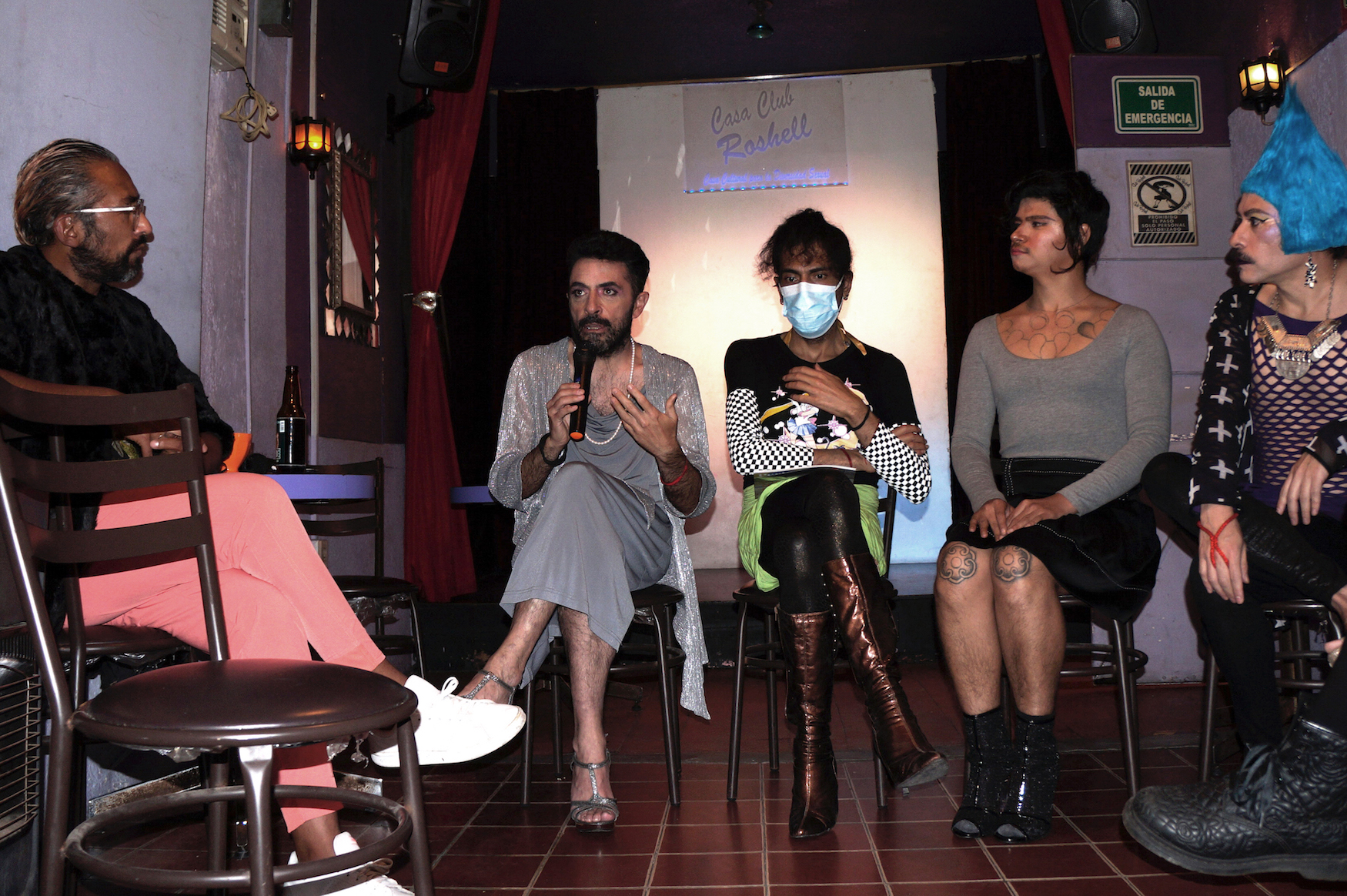 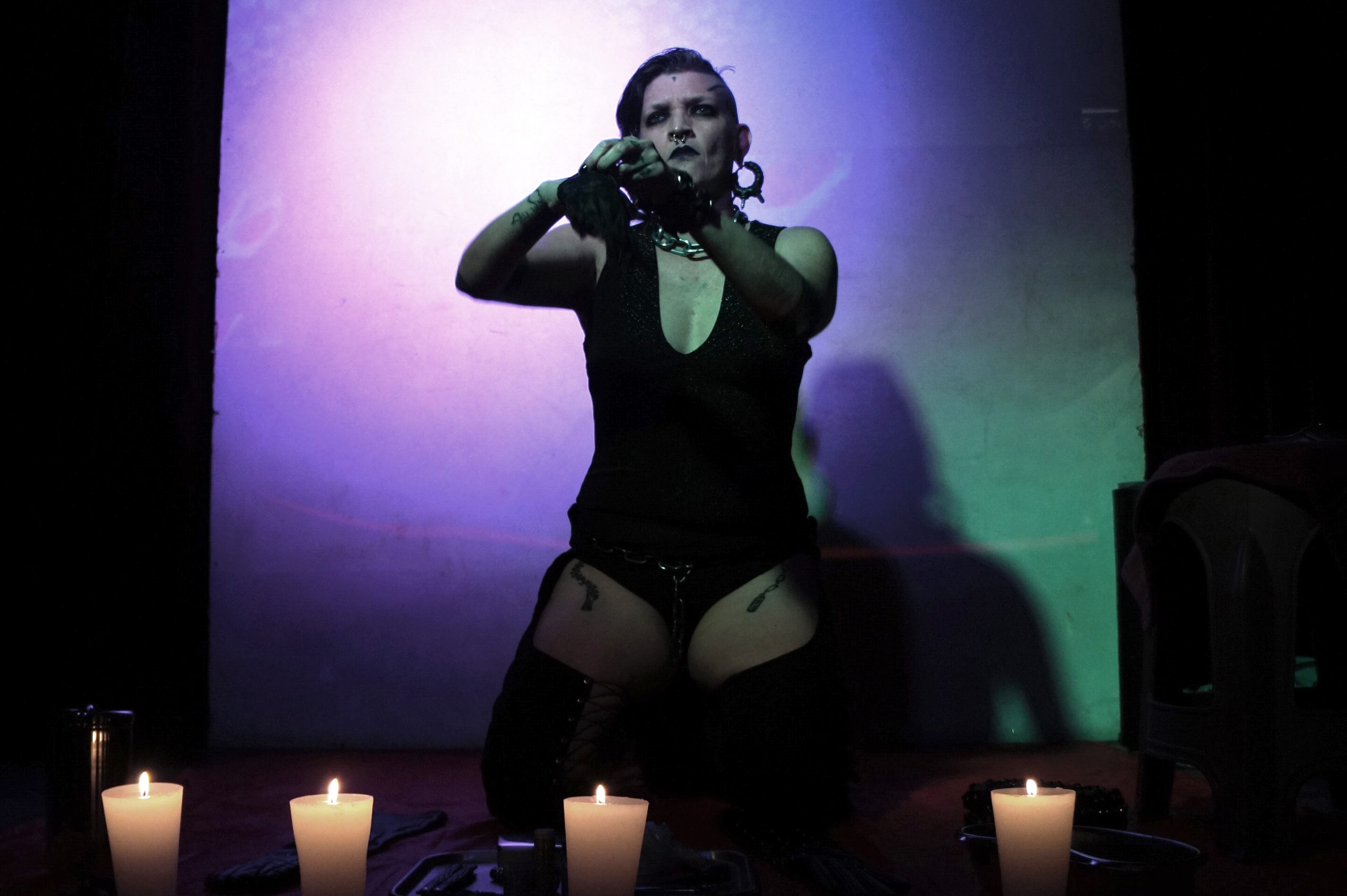 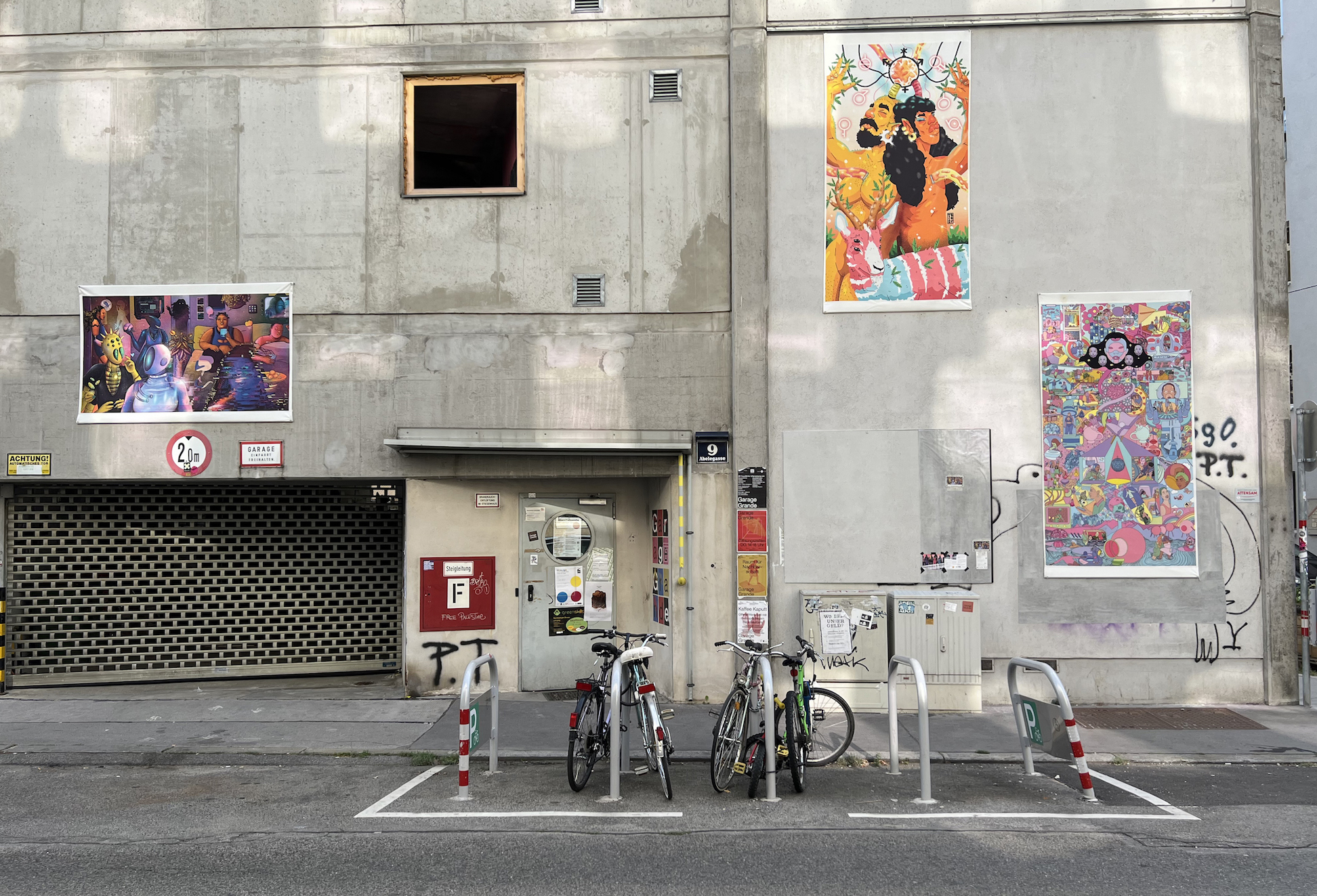 Party at the End of Gender-Normativity, installation view, Wienwoche, Vienna, 2021 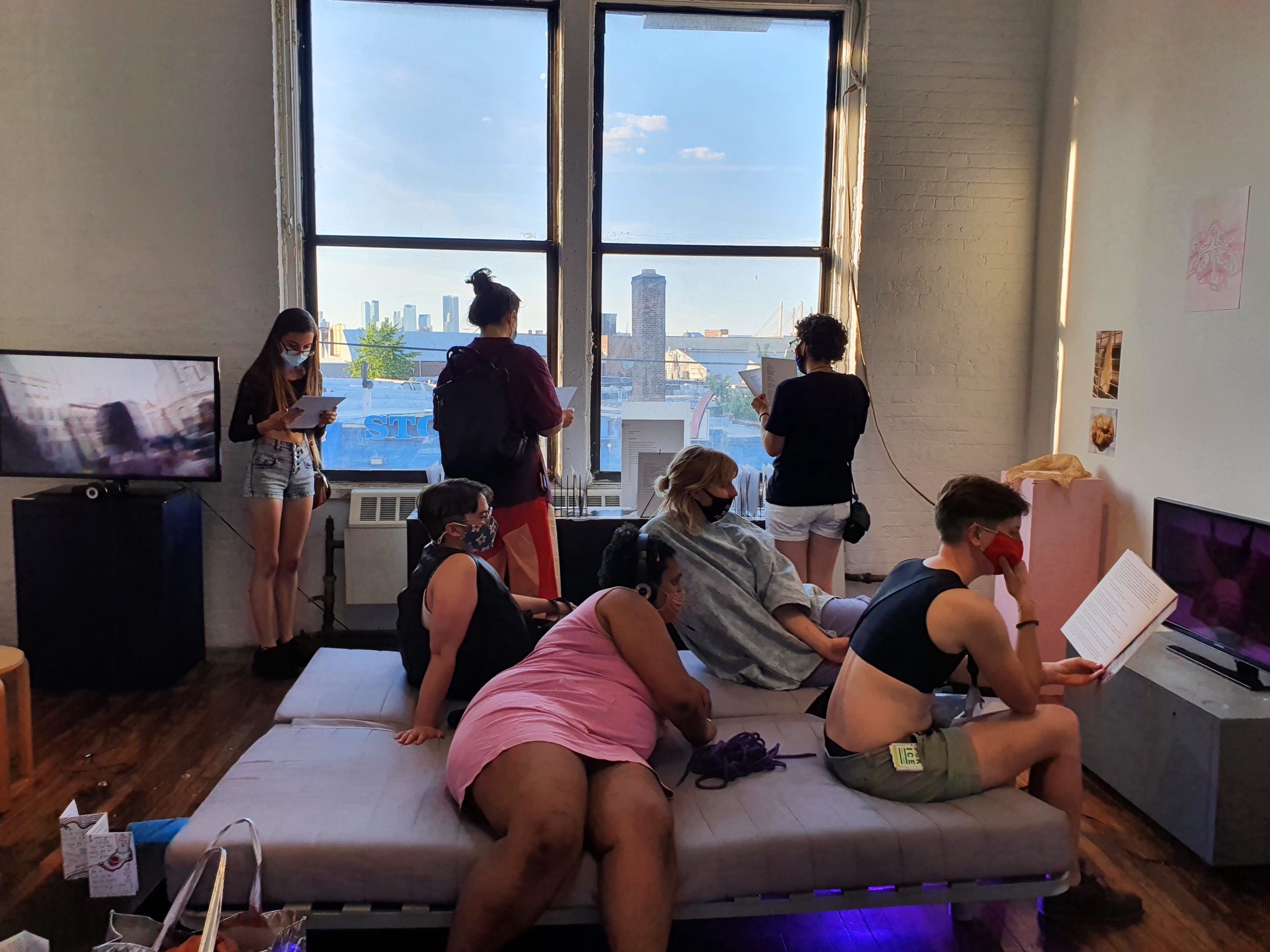 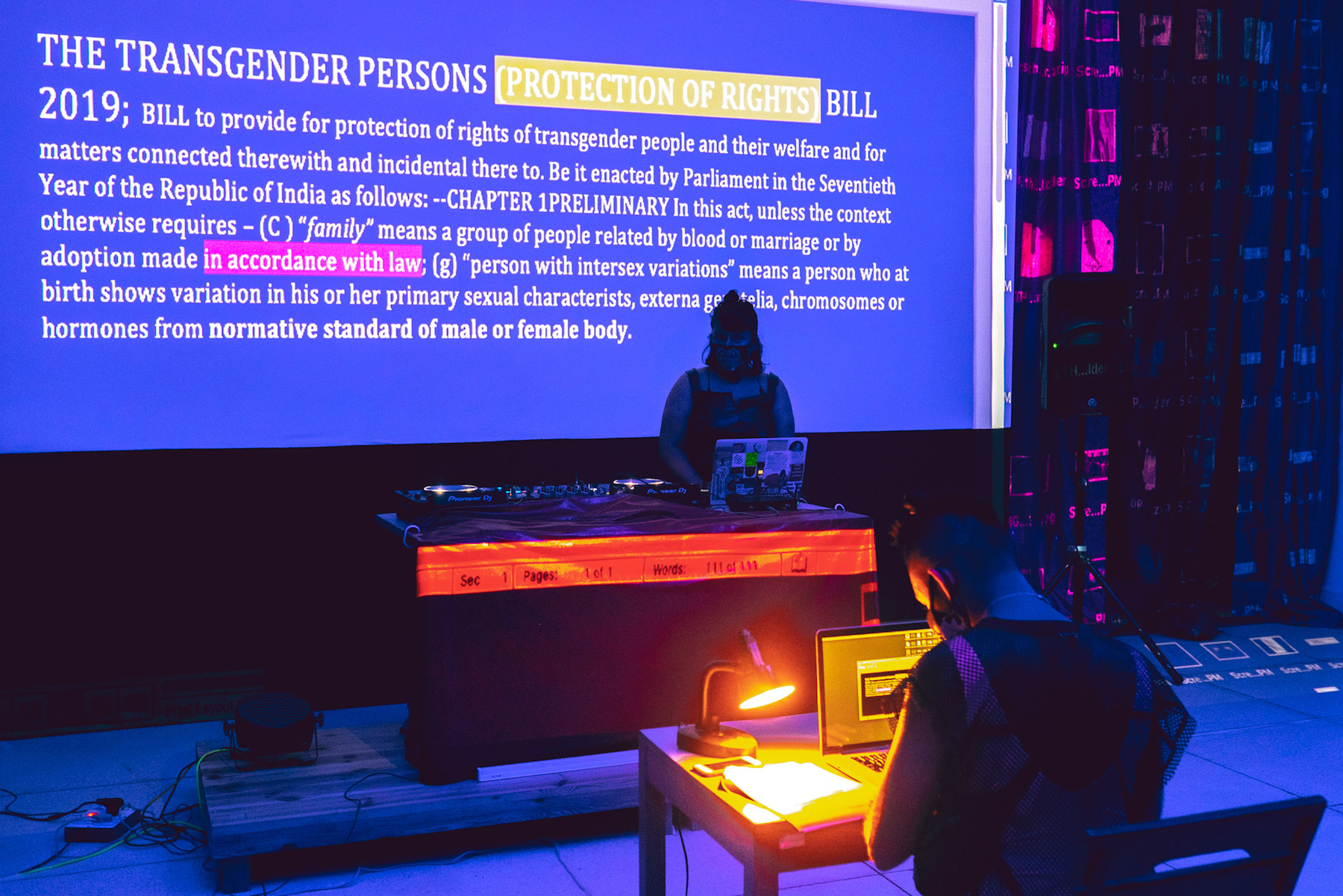 After Party Collective: A lot of conservatives accuse trans* folks of pushing a trans agenda, and we’re all about that really! Through our work we’re interested in foregrounding trans experiences and voices, developing an expanded idea of what it is to be trans* at multiple intersections, and expanding the idea of gender itself. Our practice looks to combine polyvocality with the direct experience of the body through an interdisciplinary mode that oscillates between curatorial and performance based thinking. We look to create spaces of embodied thinking that create momentum towards the affirmation of trans*, intersex, and other gender-deviant bodies. This idea of affirmation is interesting for us across multiple registers from legality, to intimacy, care, pedagogy, and futurity. We think a lot from the location of the party, as a way to reflect on subversive spaces that are created by and for trans* people, especially trans* people from Black, Indigenous, Dalit and other underrepresented backgrounds.

AE: Can you tell us about your ongoing exhibition, DANCE TRANS* REVOLUTION, showing from November to December 2021 at apexart, New York?

APC: We’re very excited about DANCE TRANS* REVOLUTION coming to life because it has given us a chance to seriously expand upon the idea of throwing parties as a critical and subversive practice. The exhibition brings together the work of eight trans* artist-organizers with heritages from the Global South, all of whom are creating and reflecting on affirmative spaces in their own regions. Through these works, primarily in the formats of video, sound, and painting, we are exploring the spatialities, rhythms, and choreographies of resilient trans-led community gathering.

Will Fredo and LoMaasBello’s video A Skip of the Heart A Change of the Beat pays homage to the roots of Black/trans* party spaces from the Drum music of the Asanti people, to San Basilio de Palenque (the first free town in the Americas), the techno clubs of Detroit, and the Ballroom scene that emerged in Harlem, NYC. An original soundtrack by Jasmine Infiniti combines these roots of Detroit techno with ballroom sounds, to form the soundscape for the exhibition space. Infiniti is also the founder of New World Dysorder, a music label for trans* and non-binary artists. New-media artist 7THGRL a.k.a. Liniya Lanvin pushes ballroom and vogue into new spaces creating wondrous digital montages in the video games Second Life and The Sims. Dion McKenzie a.k.a. TYGAPAW also presents a forward-looking worldview through their paintings of TECHNOTUBBIES calling us onto the dancefloor before the world ends. Their operatic techo EP Ode To Black Trans Lives featuring vocals by Dr. D-L Stewart, is an embodied call to action in support of Black Trans people. Bhenji Ra, mother of the House of Slé in Sydney, traces the journey of ballroom to all corners of the globe, alongside archival glimpses of family and protest from her House. Habibitch, of Algerian descent and now a prolific voguer in the balls of Paris, reminds us of the importance of decolonizing the dancefloor. Grace Banu, trans* acti-caste activist from Tamil Nadu in India shares the story of creating Sandeep Nagar, a residential-colony and self-employment structure for trans* women in South India. Celebrating a year of the colony’s formation, Grace speaks about the importance of dignity through land-rights and self-sufficiency in the movement towards trans* liberation.

This gathering of artists champions notions of visibility and self-representation of a community that we find belonging within, pushing forward the idea that our bodies are not for entertainment or spectacle, but rather emissaries of radical futures.

DANCE TRANS* REVOLUTION is on view until 23rd December 2021 at apexart NYC and online. On 13th Nov 2021 we will host a live performance by Will Fredo in the space, and on 8th Dec 2021 we will conduct a virtual curatorial walkthrough. RSVP for all events is via the apexart website.

AE: What have been some of your most successful projects in which you create spaces that move towards the affirmation of trans*, intersex, and gender-deviant bodies? In what ways do you create inclusive and safe spaces as part of your work?

APC: The idea of space has really changed with the onset of the pandemic, and our work around affirmative spaces has also had to take these changes into account. We, and a lot of other trans* folks have been feeling increased levels of isolation and alienation, and we wanted to find ways to respond to this. Early in 2021 we began thinking of the possibility of a Party at the End of Gender-Normativity that led to a public-facing display at Wienwoche Festival of Arts and Activism, in Vienna Sept 2021. The project was centered around the act of collectively visioning futures of friendship, intimacy, and joy at a time when we would no longer be restricted by the limits of the gender binary. We invited three young illustrators of varied trans* experiences: Priyanka Paul (India), Khanya Kemami (South Africa), Jonathan Eden (USA) to imagine alongside us. We also brought in speculative fiction writer Mimi Mondal (USA/India) to lead a workshop that catalysed us to think of futures in nuanced and complex manners. The whole process was really generative, allowing us to understand each other’s locations, and specific histories, and also open up blindspots that we might have about experiences like disability, migration, and colorism. Being in a trans* exclusive space also meant that we could have in-depth conversations about our gender experiences and their intersections with caste, race, and location, without needing to explain the foundational violence of gender. The three digital illustrations that came out of this process each explored particular interests of the artists: Jonathan imagined a party that took care of different abilities adding in the oft-forgotten component of rest, alongside a multi-species milieu that explored monstrosity and shadow-beings; Khanya looked at a future that disregarded the idea of a binary body within the experience of transness, visioning circumstances that allowed for decolonization through reconnecting with the natural world; and Priyanka created a densely detailed world that combined architectural futurities with motifs of friendship and intimacy from the artist’s personal life. These were printed on large scale canvas and displayed on the facade of Garage Grande in Vienna for the duration of Wienwoche, creating a conversation that could then go beyond our circles of imagination and spark futures of inclusion.

APC: We don’t necessarily see a lot of trans* and GNC artists spotlighted in the arts, and so a lot of our influences initially have come from nightlife, and this also shaped the way we first thought about our collective in 2018-19. Nightlife also creates opportunities for work and income that provide alternatives beyond the traditional survival work that trans* communities have had to take up. Juliana Huxtable is someone whose ideas and practice gives us a lot of power, especially in the ways she has traversed art and nightlife. Wu Tsang also has a gorgeous way of melding these worlds. Jasmine Infiniti, TYGAPAW, LSDXOXO, Max Folly are some other nightlife folks that we absolutely dig. They are not only amazing independent artists but also organise parties, which create space for queer, trans*, black, PoC folx.

Within the arts our collective work draws strength from peer trans* artists, especially those that are practicing outside of rigid artworld structures and in anti-systematic ways. We love the work and words of Pédra Costa, who is of Brazilian heritage, now lives and works in Berlin. Pédra does this amazing series of performances called De-colon-ization, and we keep going back to her Southern Butthole Manifesto. Klau Chinche, the founder of Gyna-Punk has been amazing to work with. Their deep knowledge of the violence of gynecology and medicine emerges in such multifaceted ways including performance, pedagogy, and video, we love that. Anna Tje who creates immersive installations where they aim to deconstruct the survival mechanisms of healing in subcultures. We recently met with abolitionist organizer and performance artist Benji Hart in Chicago, and are really interested to work with them. We’ve also been following and loving the works of Daniel Lie, Martine Gutierrez, Tejal Shah, Renuka Rajiv, Tsohil Bhatia, amongst so many others.

AE: Do you have any shows, performances or projects coming up in 2022?

APC: We’re looking forward to pursuing two lines of thinking in 2022. The first is a series of gatherings around transness, sexual health and mental health. We started this series with Entre Sures / Between Souths a trans*cultural fair organized with Eli Moon at the iconic Club Casa Roshell in Mexico City. We organized two discussion groups on the subjects of health and gender, spotlighting ongoing HIV epidemic and advancements in relation to the virus. These discussions were followed by performances by trans and non-binary artists, all housed in one of Mexico City’s most inclusive and affirmativce spaces for trans* and queer folks, run by two amazing transwomen: Casa Roshell. We are looking to continue this mode of gathering that combines peer learning and embodied sharing in New Delhi and Berlin next year.

We are also developing a multidisciplinary performance that presents a theoretical proposition towards the abolition of gender through expansion and explosion. This performance will be premiered at documenta fifteen, within the space created by Party Office b2b Fadescha in Kassel.