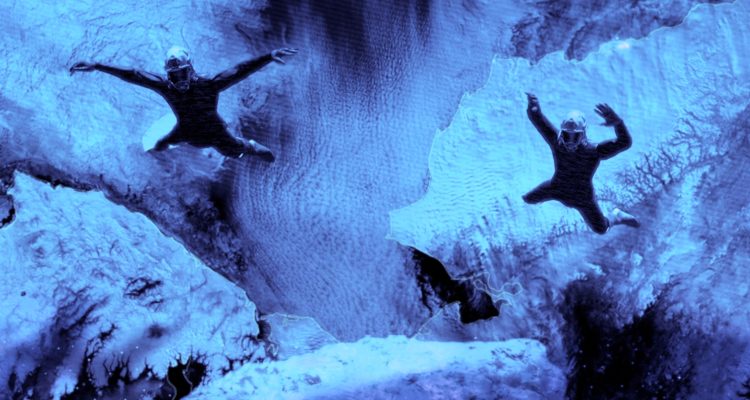 ArteEast is pleased to present an interview with artist Marianne Fahmy as part of our Artist Spotlight series.

This Artist Spotlight is presented in association with ArteEast’s Unpacking the ArteArchive program Monuments & Flowers, curated by Regine Basha, which features Marianne Fahmy’s film, What Things May Come.

The Monuments & Flowers program will be available for streaming online in both English and Spanish, from April 29 – May 7. RSVP here.

In partnership with Casa Árabe, theatrical screenings will be presented at Casa Árabe Cordoba (April 27th, 7pm) and at Casa Árabe Madrid (April 28, 7:30pm). For more info on the in person program go to casaarabe.es

Marianne Fahmy lives and works in Alexandria, Egypt. She earned her BA in Painting before studying at Mass Alexandria independent art program in 2016.

Marianne works with installation and film. Her focus is on marginalized histories of people, architecture and language, where she finds possibilities for creative additions that transform prescribed conventional narratives into a boundless-by-time artwork. Her current focus is on the history of water in Egypt, from which she explores potential scenarios and the future people to come. 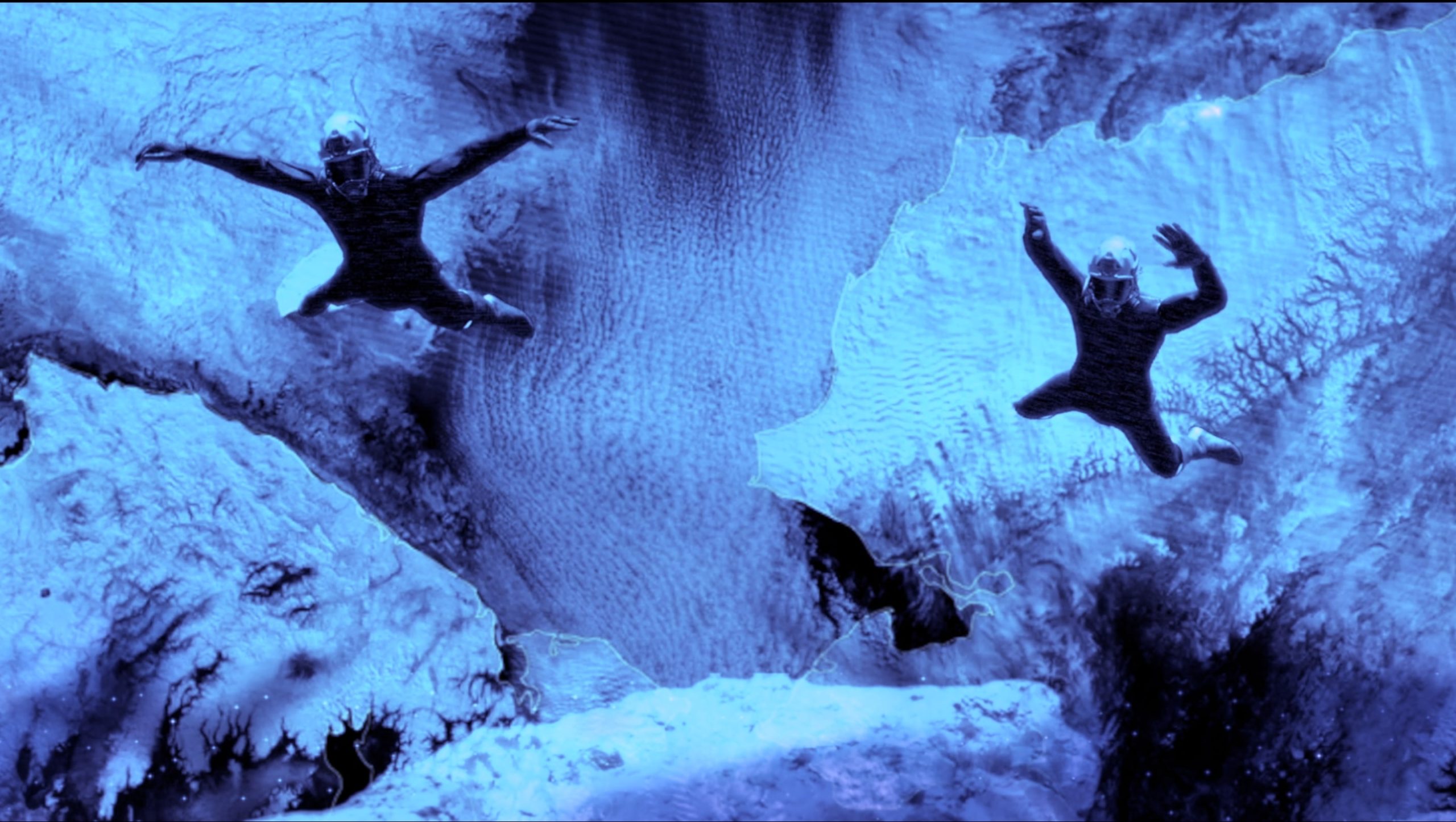 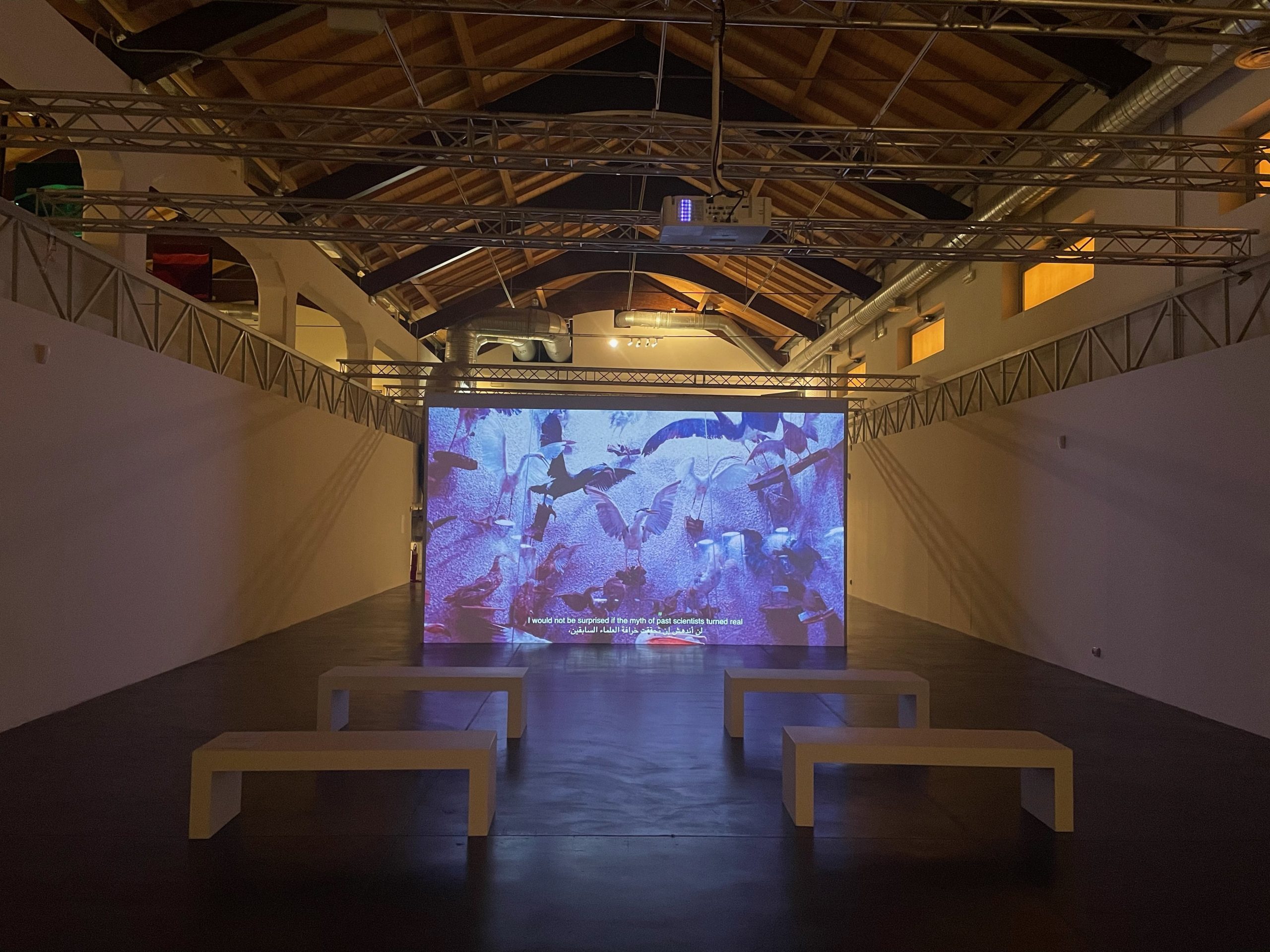 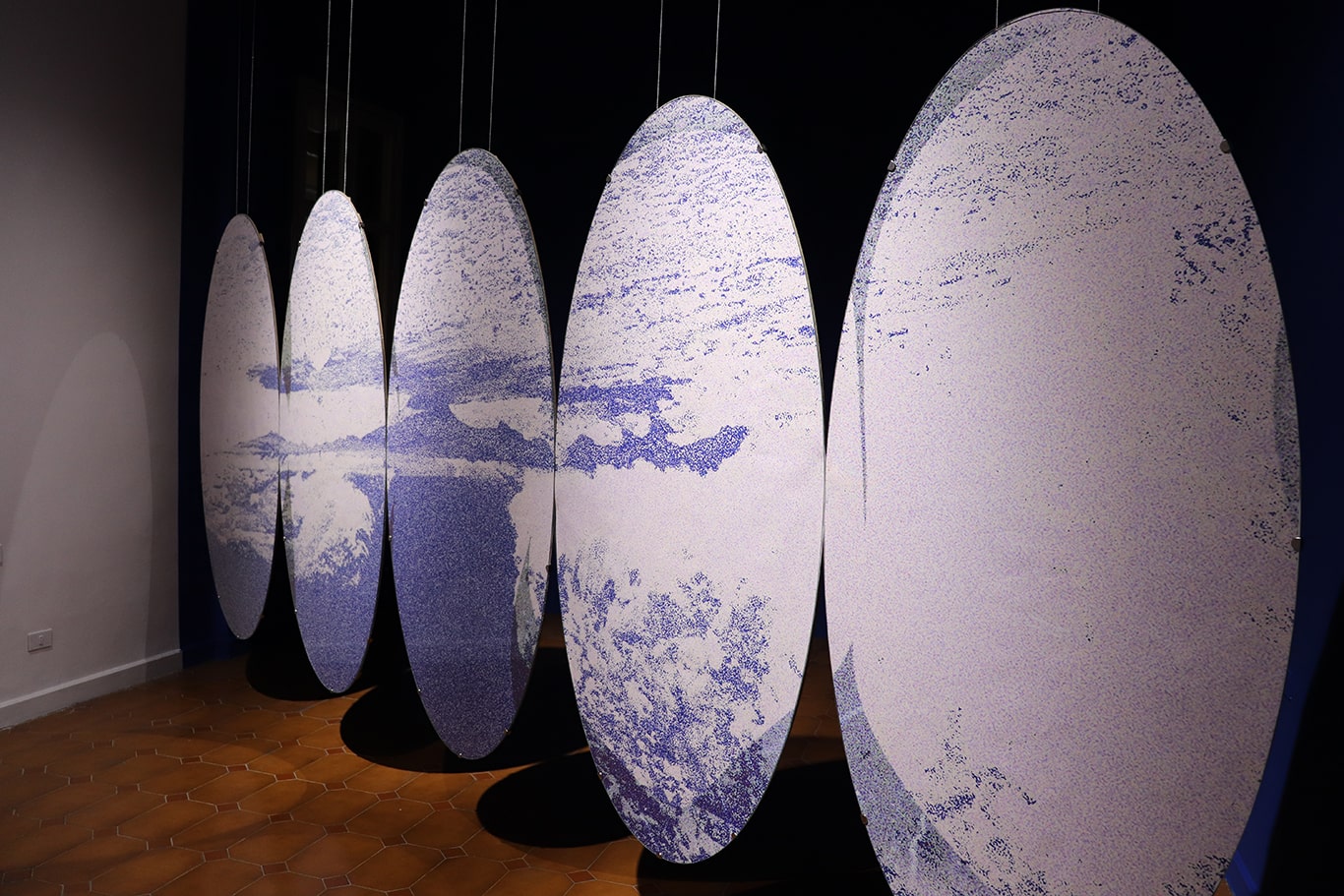 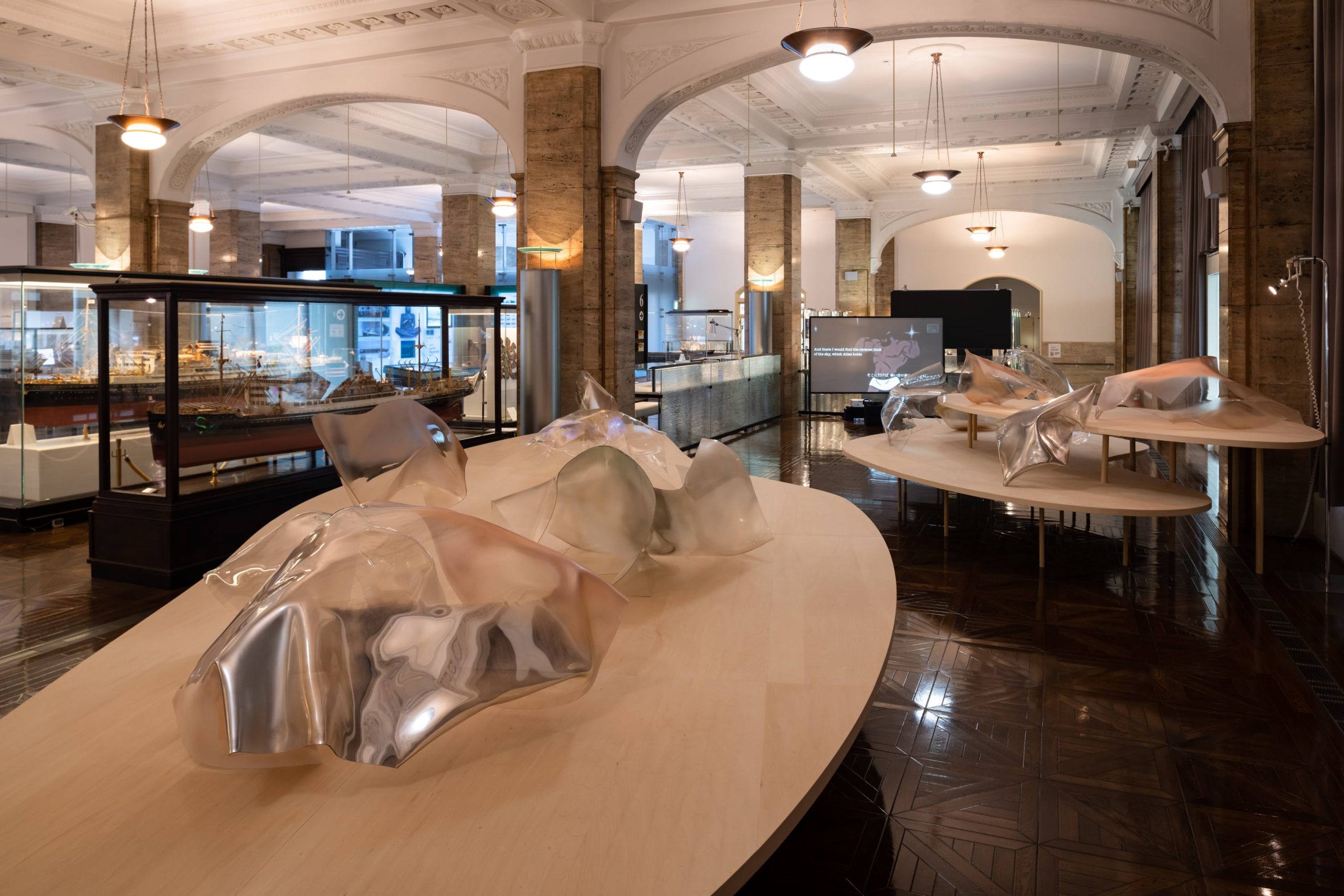 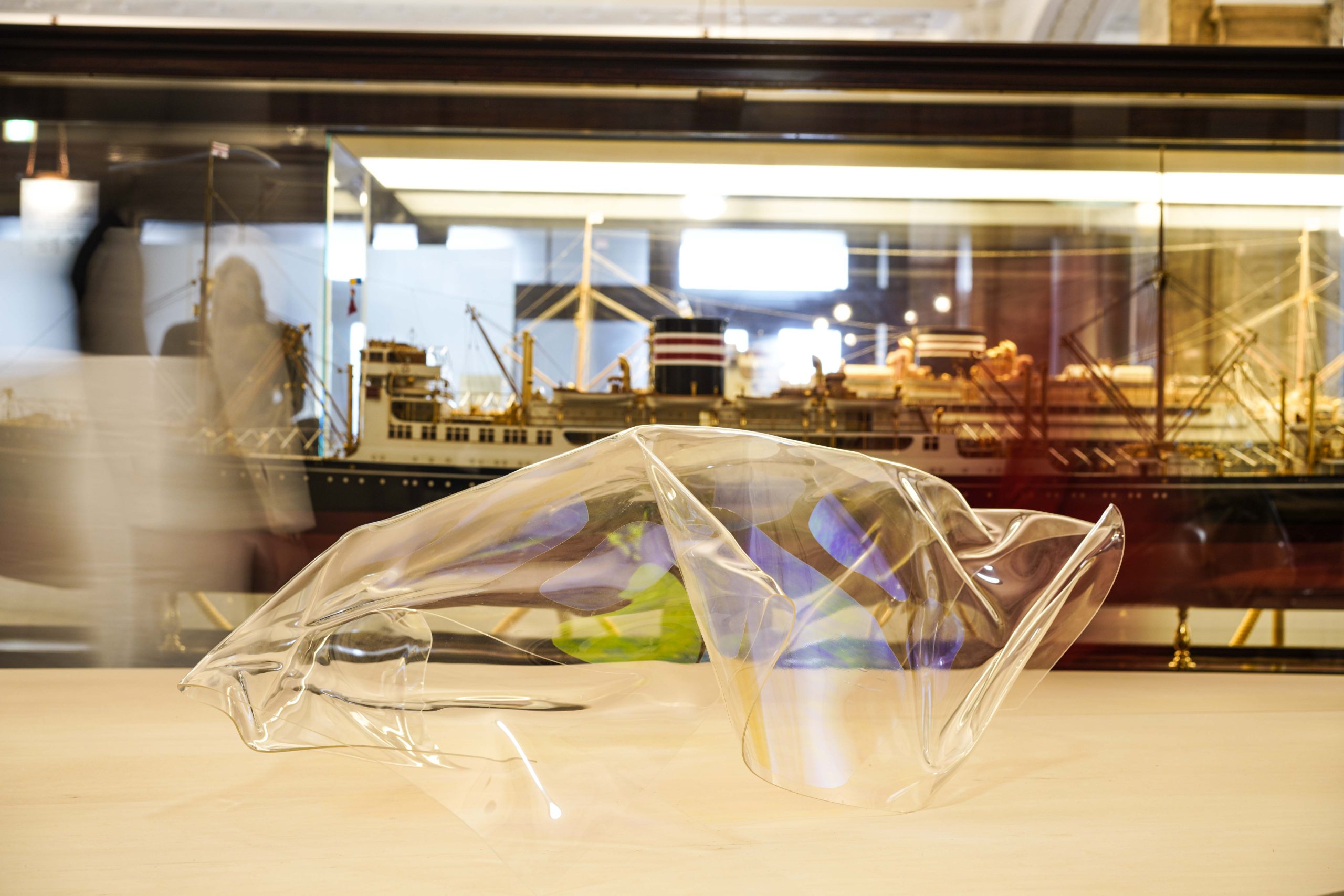 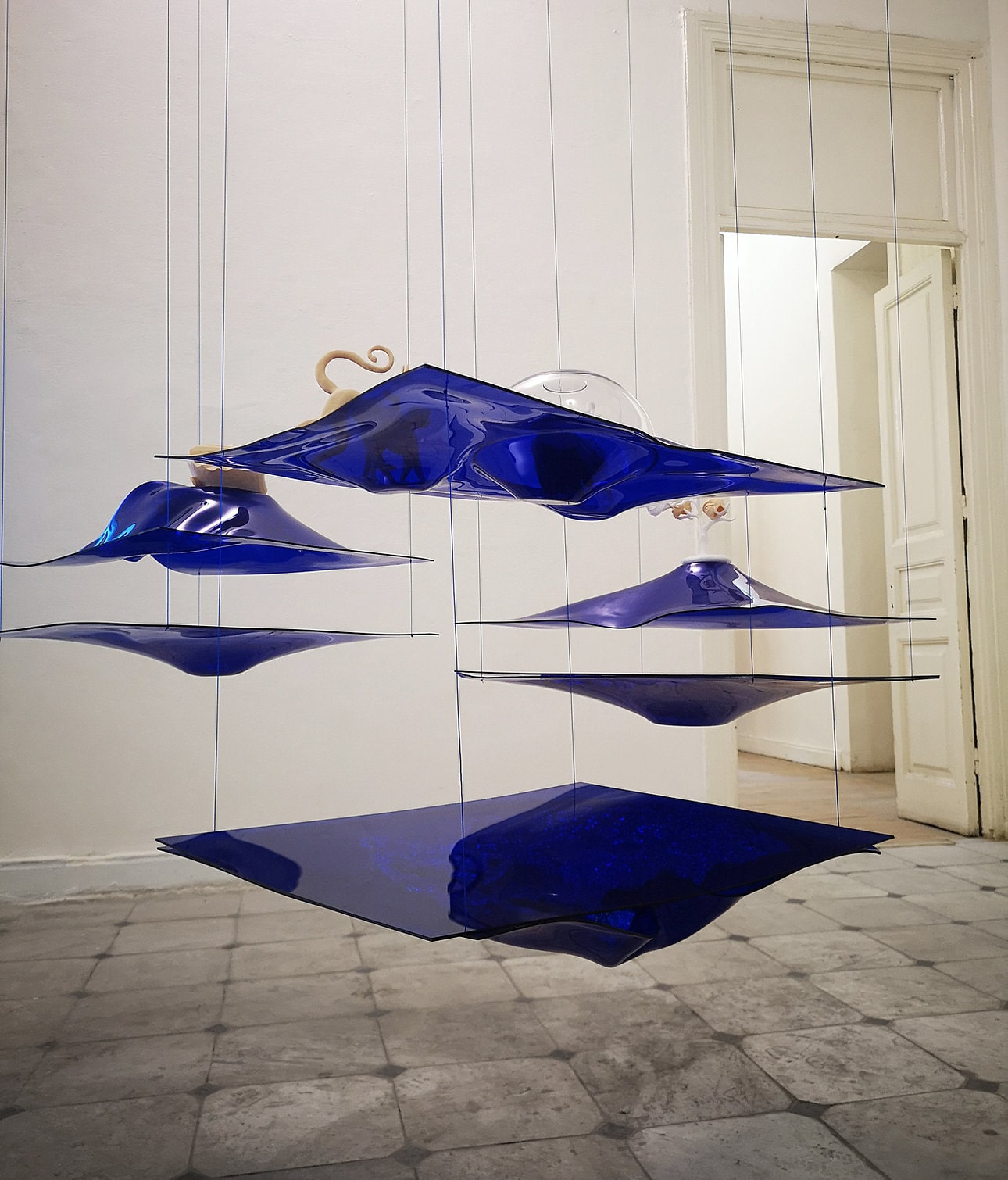 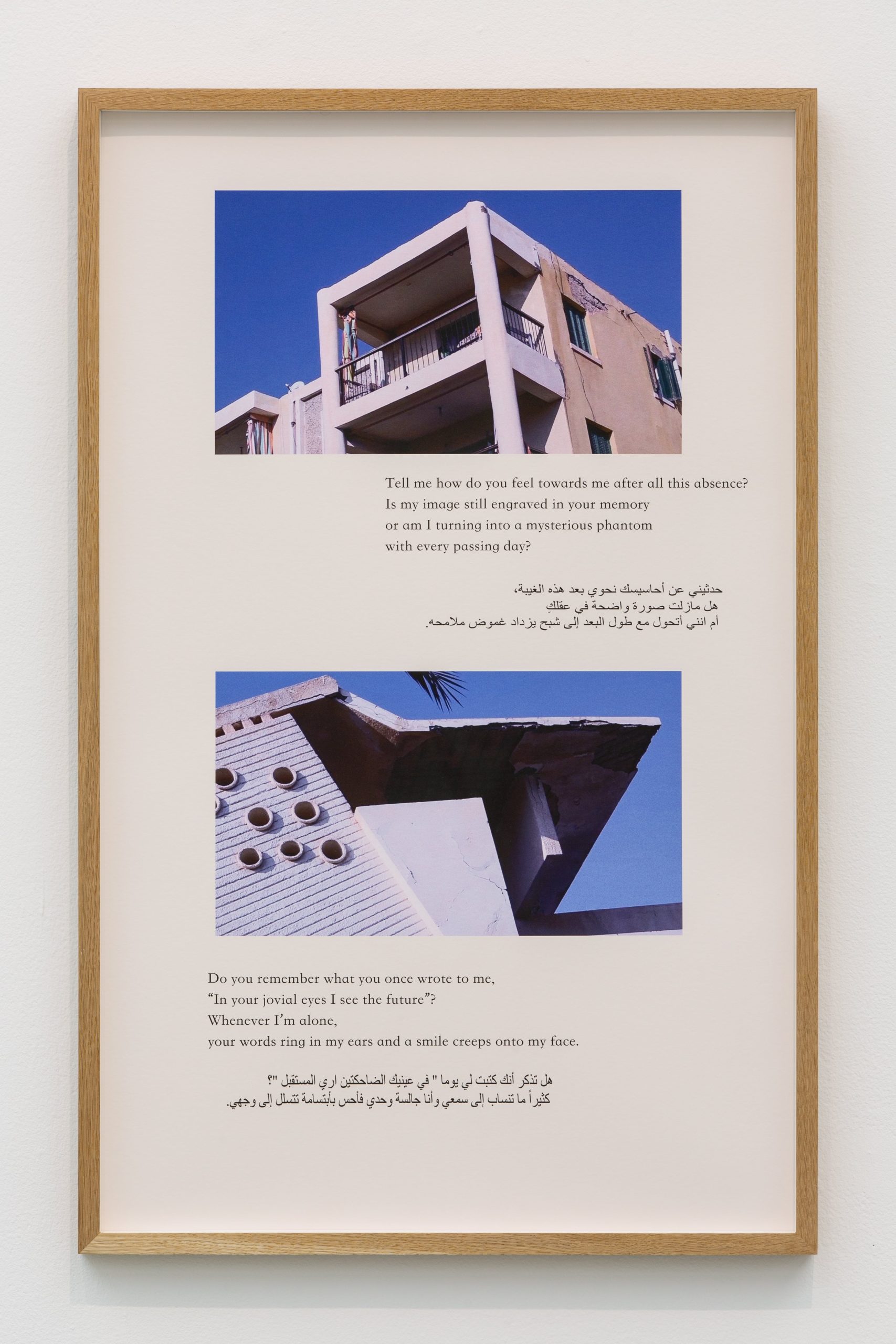 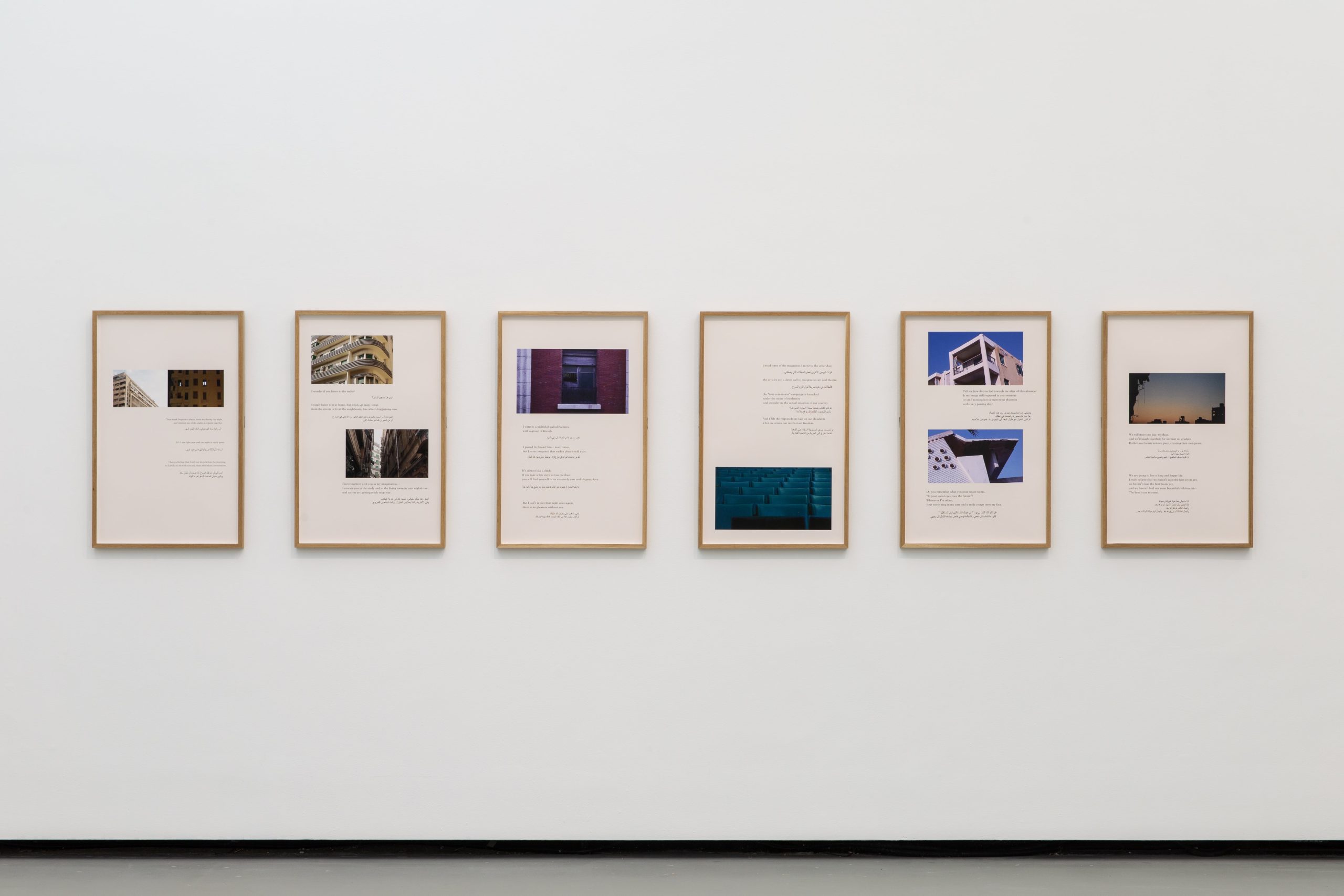 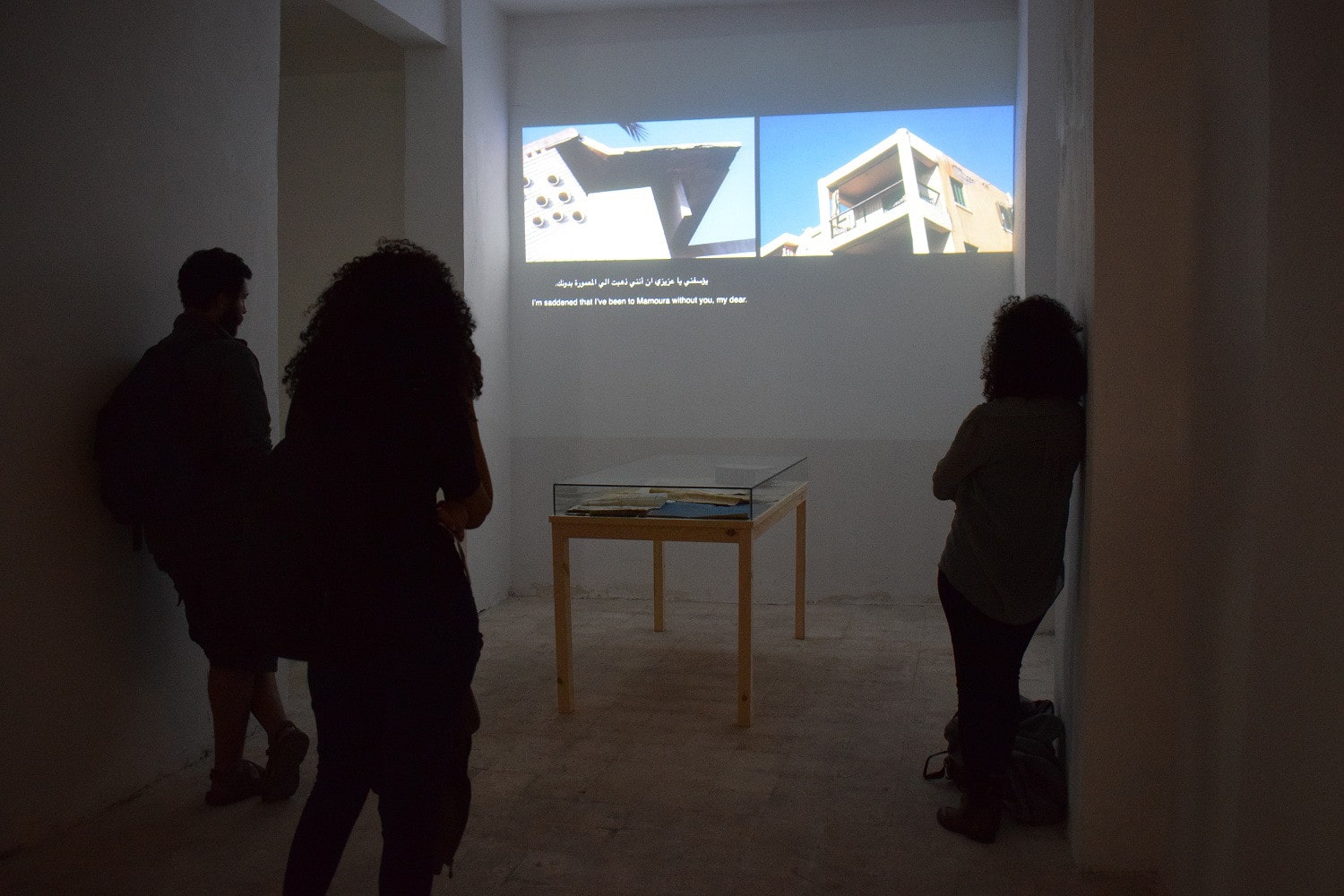 AreteEast: Can you tell us about your work in general and the main themes you return to in your practice?

Marianne Fahmy: I work with film and installation. During my studies at the fine arts university in Alexandria, I was very eager to explore different mediums besides my academic major of painting. I was leaning towards digital forms of production, and since it was fully self-taught, the outcome was very experimental, which helped me explore the medium further. I was lucky to be surrounded by fellow artists with whom we formed a space where we worked and supported each other in various projects. These early years were very important in terms of my self-exploration and understanding what drives me as an artist. One of the projects I started at university, History as Proposed, was later developed during my practice at Mass Alexandria, an independent art program founded by Wael Shawky. The project focuses on an abandoned train station in Alexandria that has significant architectural structures with unfortunately little historical information. This project laid the foundation for my interest in architecture as an archive of marginalized narratives throughout history. It also opened up a way for me to talk about the notion of nationalism, counter-nostalgia and socio-political changes in Egypt. An example of  this is my 31 Silent Encounters film (2016), which consists of personal love letters between a communist couple in 1950.

I find myself taking on the role of a new historicist, which allows me to connect emotionally to narratives and have a deeper understanding of its context. I’m particularly interested in exploring potential scenarios related to people, architecture, and language; it’s a way for me to understand my constantly changing surroundings in Alexandria. With a focus on the potential flood of the city in the future, I have produced a series of works that go back to the history of water and its relation to the notion of nationalism.

AE: Can you elaborate on the intersection of history, fiction, and mythology within your work?

MF: As my research progresses, the ideas start to unravel themselves into a narrative, a multilayered story where the past and the future are entwined. The terms “Fabulation” or “Myth-making,” as per Gilles Deleuze and Bergson, have greatly influenced my approach to creating future narratives. They address how natural phenomena have led people to invent gods, religion, and social rules. The terms can also be understood as referring to the role of artists in inventing people that are yet to come or imagining a collectivity that is yet to exist. I deploy past and current narratives into a potential future that bounces between fiction and reality. By retelling myths and prophecies in the film context, it takes the edge off the social and political issues addressed and turns them into mind-stimulating imaginary stories.

I transform the footage and sound into larger than life images that transmit the notion of “becoming.”
In What Things May Come (2019), a film that tells the story of a people escaping the great flood in Egypt to inhabit a secret base in the Saharan desert, prepared to host the new society, I worked with footage that I filmed during travels on art residencies and exhibitions. Some were taken on Ile de Madeleine in Senegal, some on a beach in Rabat, Morocco, and at the Anatomy Museum in Switzerland. I was interested in exploring seascapes that were visually different from that of my home town, and appropriated them to be the futuristic coastline of Egypt.  I have then transformed the footage into larger than life images that transmit the notion of “becoming” through heavy color editing/3D animation diver characters and layers of sounds and music that I developed together with Tarek Hussein.

AE: What role do the desert, the sea and landscape have within your practice?

MF: Well, the sea is an entity that remains to a great extent unexplored by humans. This mystery and potentiality, manifested by the sea as well as the desert, evoke beyond ordinary emotions and sensations.

The out-of-self experience, in relation to the sea, is a concept present in Magic Carpet Land (2020), a film that narrates the memoir of one of the first oceanographers in Egypt, who was part of an English marine research expedition. And as time passes by, he speaks about his changing affiliation with his English comrades, and finds himself in conflict between his national feeling and fascination with the West. He then starts to see the vessel as a nomadic place “a horizon of seekers who are no longer bound to certainties, not even dreams.” The film premiered at Manifesta’s parallel exhibition Spoiled Waters Spilled curated by Inga Lace and Clelia Coussonnet.

The desert is also a mysterious entity that is greater than man; it unfolds layers of magic, illusions and abstraction that have the power to absorb a human and traverse them into other-worldly beings. Lately, my work is concerned with cities shifting into the desert, and questions the habitation alternatives proposed that justify the expansion into this entity.

MF: It’s interesting how you mention cartography and development projects together in your question. I found myself interested in the history of map-making, and the invention of myth/fiction stories that were believed by sailors to be true. In the 16th century, sea monsters were drawn in the Theatrum orbis terrarum maps by Flemish cartographer Abraham Ortelius. In the past, the process of drawing a map of the oceans was in fact a race by dominant countries as to who had control over the sea. It was a state commission that directed cartographers and sailors to draw maps of the new borders they had reached. The process was bound to fail, and resulted in many inaccuracies. Nonetheless, the act of expansion is always present by different means. State-sponsored infrastructural projects, such as those in the desert, reflect a ceaseless dream for a national project that transforms the arid desert into a place for agriculture and youth housing. In the What Things May Come film, an existing project is questioned in terms of its functionality and makes me wonder about other mega projects and their connection to the notion of nationalism in the future.

AE:  In addition to your video works, you create installations of prints on canvas as well as acrylic sculptures. Can you discuss these works and how they relate to your videos?

MF: From the above mentioned research and artwork, Atlas l installation came to be. It consists of layers of imaginary terrain and post-human artifacts. Atlas has become an ongoing series growing into larger scale sculptures; Atlas series. The group of 26 thermoformed sculptures were showcased at the Maritime Museum in Japan as a work commissioned by the Yokohama Triennale, curated by Raqs Media Collective. Along with the installation, a video on the intersection between migration, ecological changes and science was on display. It was quite interesting and challenging to work with the installation in relation to the museum artifacts and history, as well as to see all these layers coming together. Although acrylic as a material is flexible and enabled me to create the shapes I imagined with heat application, I have decided to shift to more sustainable materials.

In the past year I have produced ode to a desert and upon the margins of dream land, two projects that explore the photographic medium and editing. I transform photographs into graphic storytelling images creating a playful paradoxical environment that foresees the future change of landscapes.

MF: I have always been an admirer of Amy Nimr, an inspiring female artist who was part of the Art and Liberty group. Although her paintings were created in the early 20th century, I find them indeed relevant and that they speak to our time. The transitional period in Egypt from the monarchy to the republic was such an intense time and that produced strong feelings and opinions. I enjoy exploring it through the creative process of individuals. Some have a direct role in my work. For instance, in Magic Carpet Land, the book by Hussein Fawzi became a reference while I was writing the film script. I’m infatuated by how each individual had a different experience of nationalism, and how the political transition was affecting their thoughts and work. I’m trying to understand many of our current social and political issues by revisiting the past.

MF: I’m very excited to develop my earliest project History as proposed for a traveling exhibition titled Alexandria-past futures, curated by Sarah Rifky and Edwin Nasr. The exhibition will take place at Bozar – Center for Fine Arts, Brussels and at the Mucem – Museum of the Civilizations of Europe and the Mediterranean. The show derives from the city and its contested histories, with a focus on the urban, infrastructural and social formations that shape it.

I am also happy to be working again with curator Clelia Coussonnet and Amara Antilla on an exhibition at The Contemporary Arts Center (CAC) in Cincinnati, Ohio. The show Breaking Water will offer an exploration of water as an origin or the primal source of life; water’s facilitation of inter-species exchange; the social and political agency of fluidity; and the rights of waters.