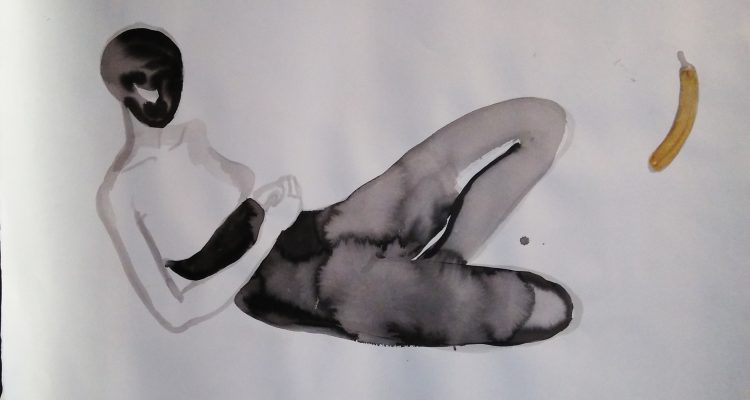 ArteEast is pleased to present an interview with artist Shayma Aziz as part of our Artist Spotlight.

Shayma Aziz is a visual artist whose work combines traditional fine arts technicality with new media practices, focusing particularly on painting, sculpture, interdisciplinary projects, and animation. Born in Asyut, Egypt,  Aziz obtained her BFA in painting from the Faculty of Fine Arts in Luxor, where she investigated representational formats in ancient Egyptian art before she moved to Cairo and actively engaged in its growing art scene for seventeen years. She received several production and residency grants including Al Mawred Al Thaqafi’s Production Grant, Centre d’Arte i Natura’s residency program (2010), L’officina Marseille (2011), Siwa Studios residency (2013), and 3rd place prize at  Caravan’s Global Mosaic exhibition 2019. She moved to New York in the spring of 2019, where she’s currently based.

Her work has been exhibited internationally, including exhibitions in Cairo, Alexandria, Berlin, New York, Thessaloniki, Tehran, Beirut, Tunis, Terni, Amsterdam and Marseilles. Her audio light installation piece “Death of a Dress” was exhibited in Altars, Grottos and Portals at the Park Church Co-op in NYC (2019). Her large-scale ink painting series A State of Body was shown in 392 Rmeil 393 contemporary art gallery in Beirut (2016) and Goethe Institute in Cairo (2018). Her drawing installation Floating Over the Cairene Sky was exhibited in Cairo at Artellewa Arts Space, examining urban decay and the taboo/criminalization of public displays of affection in Egypt.  Women in Black at ZicoHouse Beirut (2009) mourns the disappearance of the female figure from public space in Arab cities, depicting figures in ghostly poses borrowed from Modern Art history’s dominant male gaze. Her New York Live Arts painting/performance live mural At WAR(k) at Live Ideas Festival: MENA/Future Cultural Transformations in the Middle East North Africa Region (2016) looks at fallen bodies, the poetics of war murals, mass immigration, and different temporalities between labour, dreamers, dance and drowning. Aziz is currently engaged in her work in progress: To Bestialize Her, which looks at animal metaphors used towards women in folk belief, and how misogyny is embedded and normalized in everyday language to subdue and alienate women. 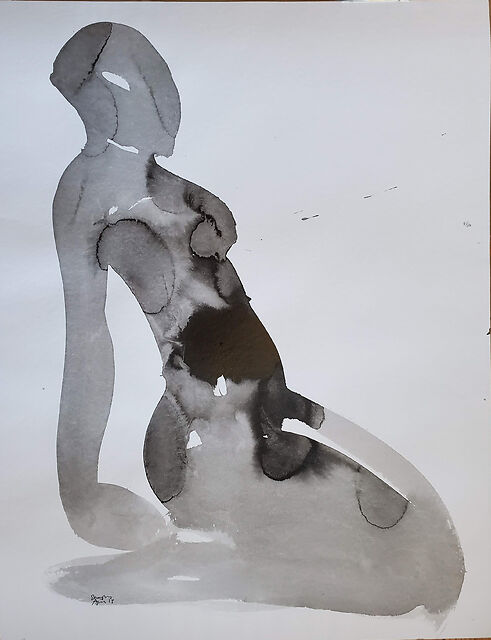 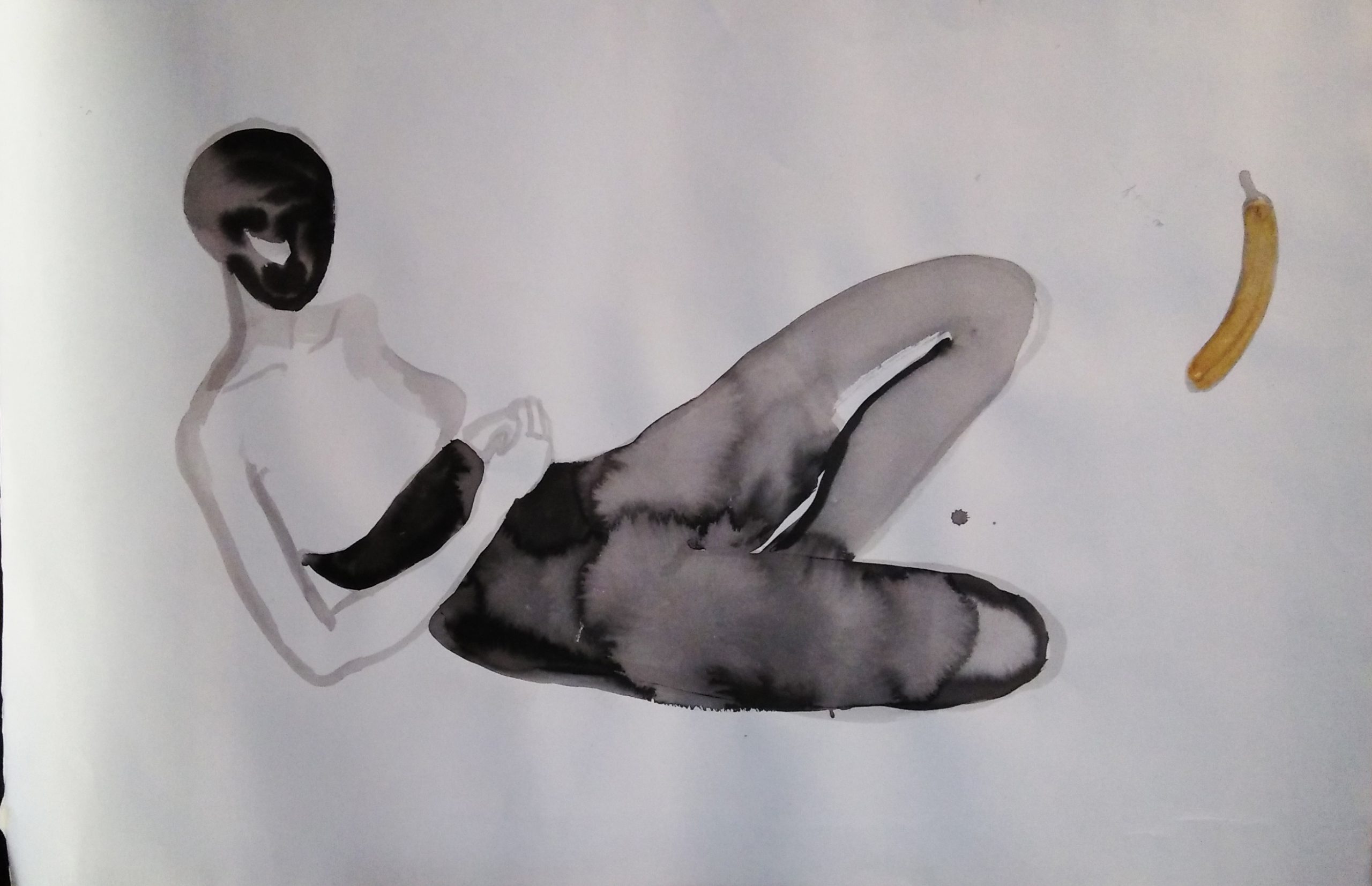 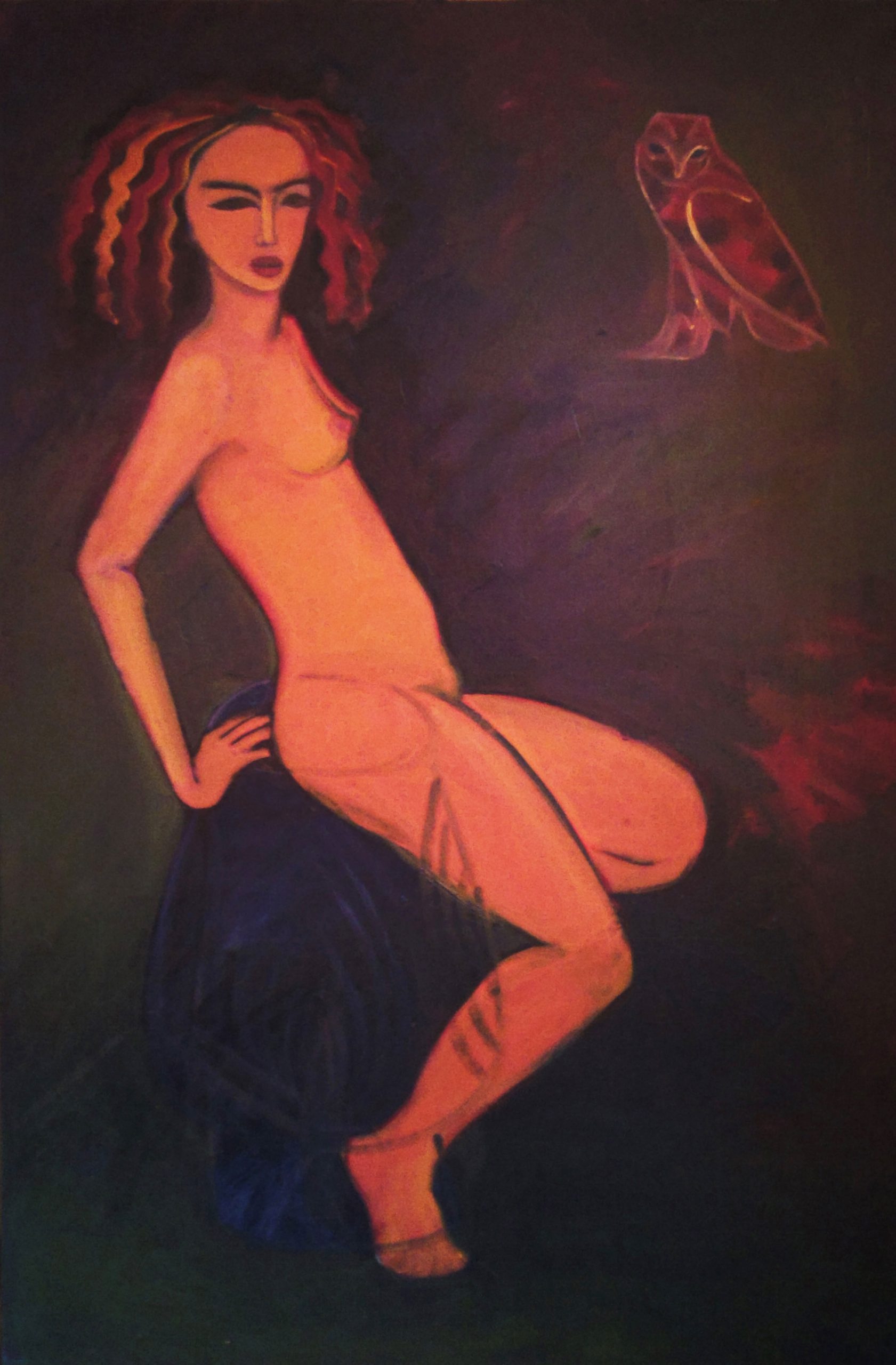 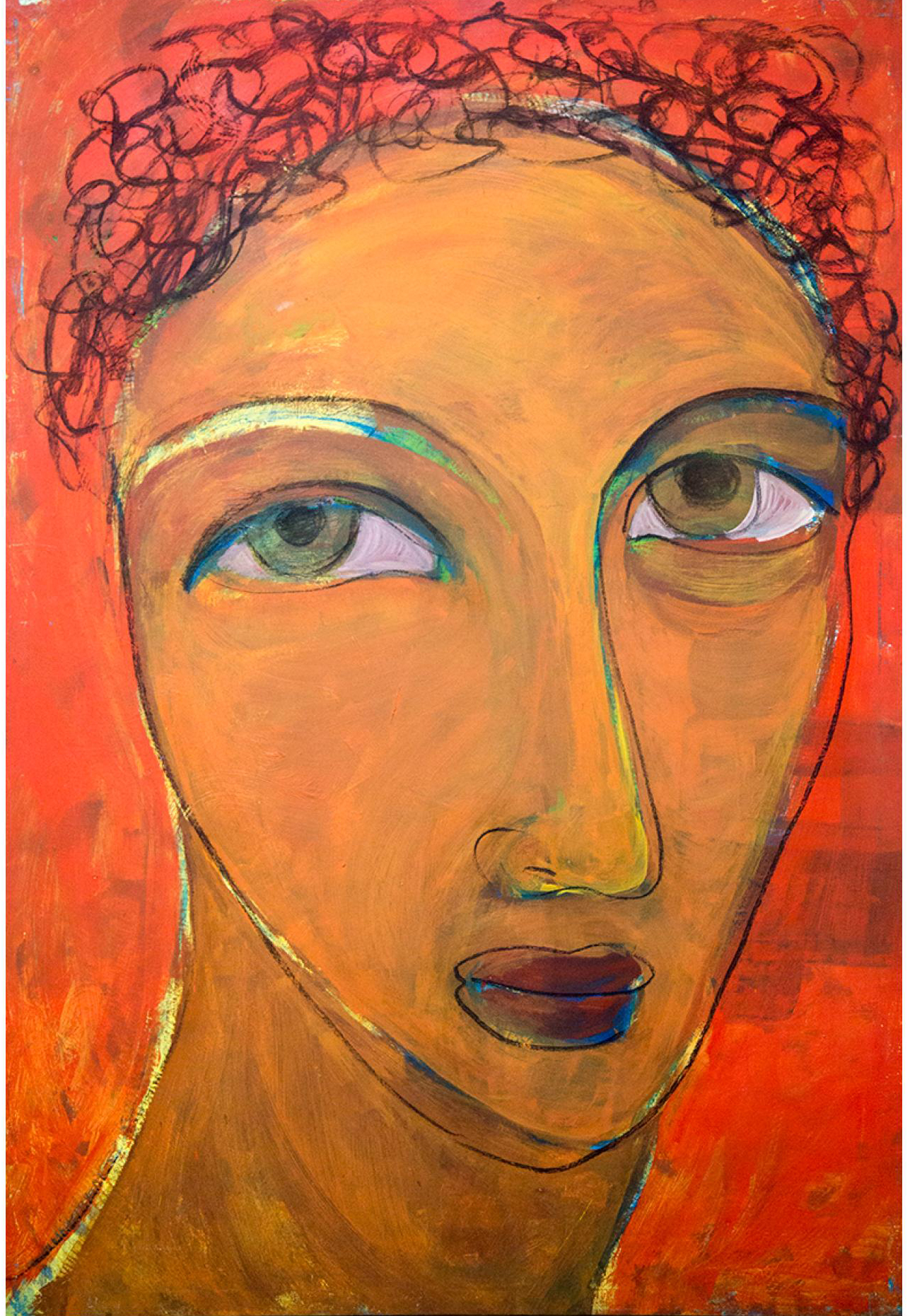 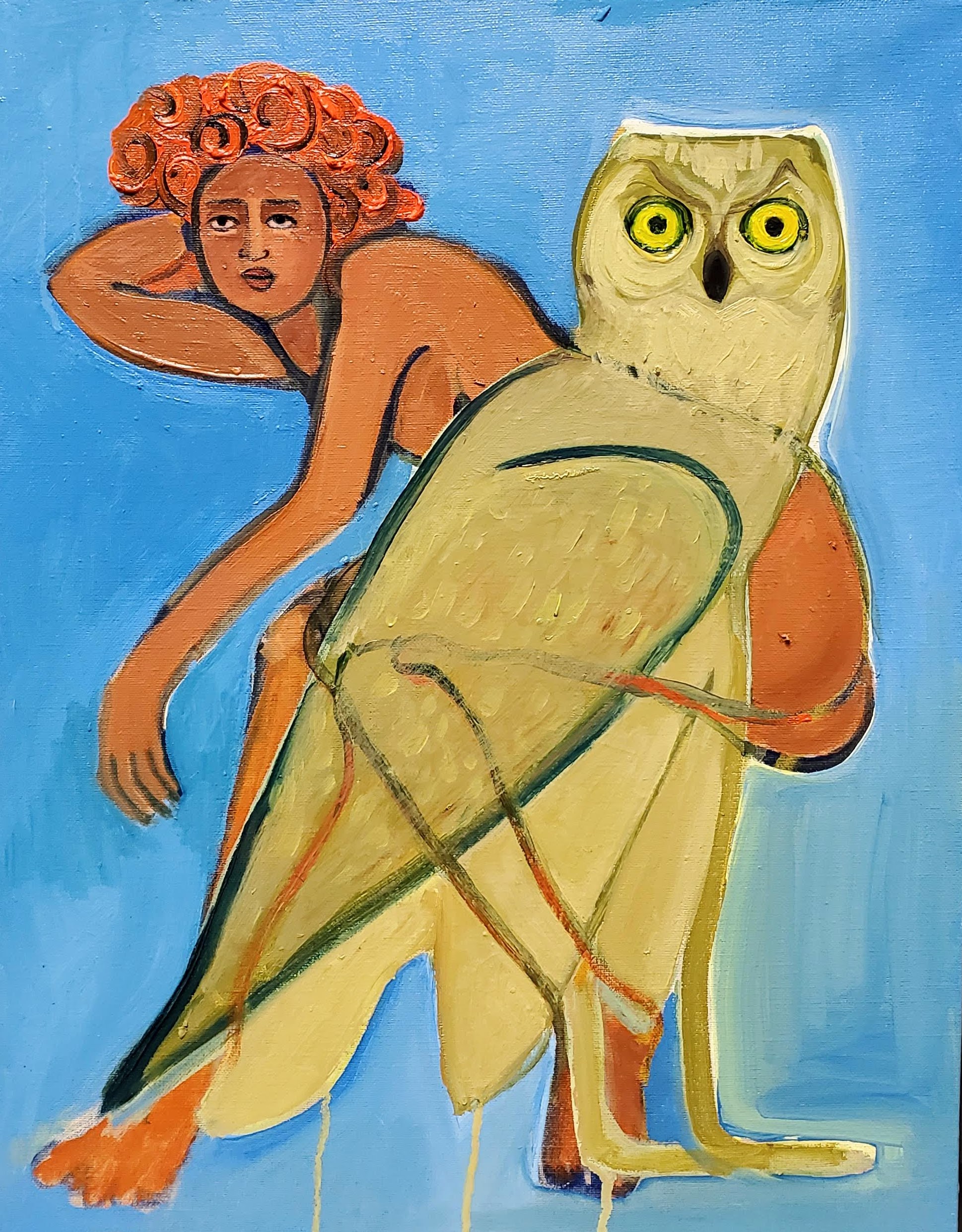 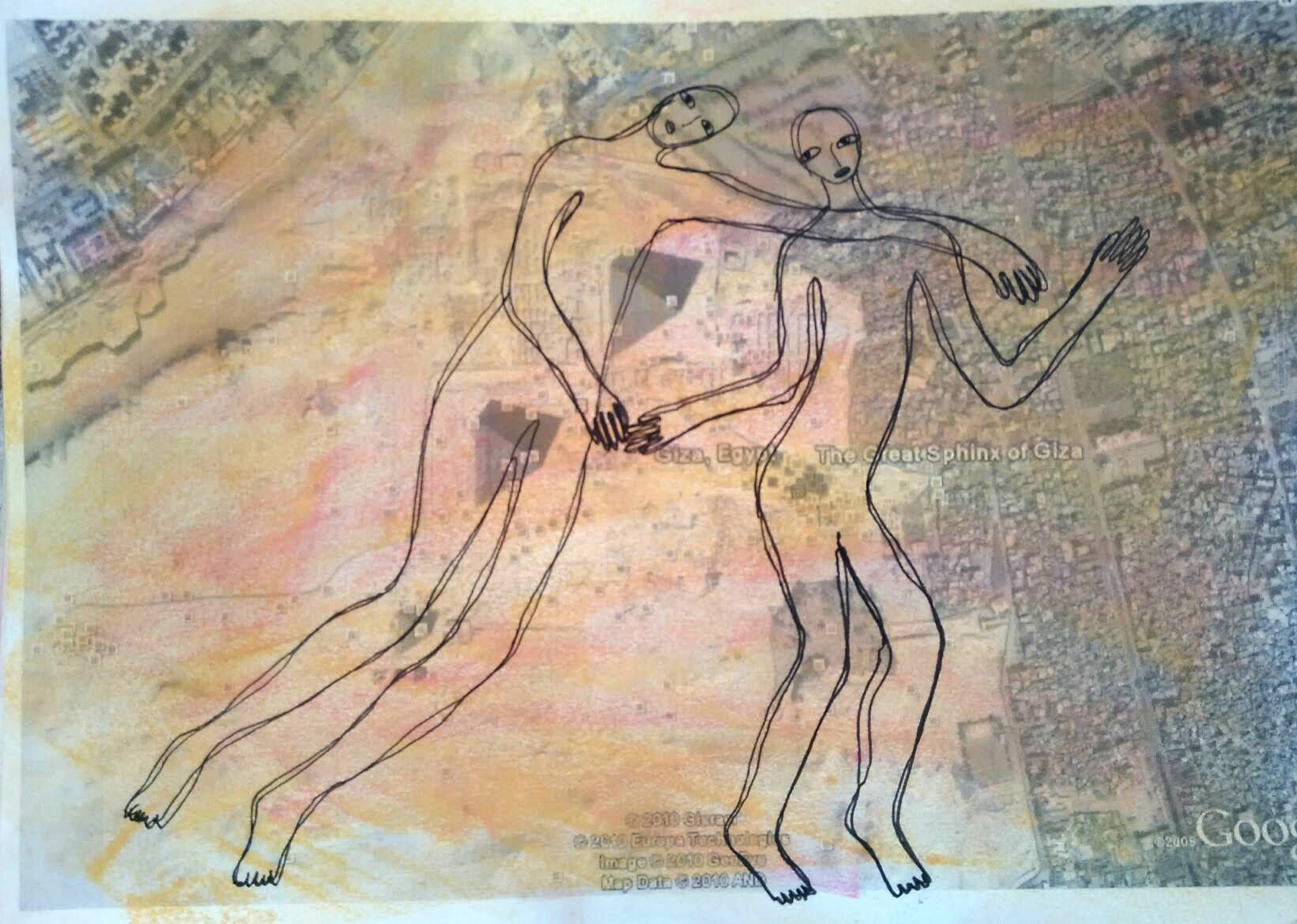 Floating Over the Cairene Sky, Giza Pyramids, 2010, A4 pen and pastels on digitally printed images 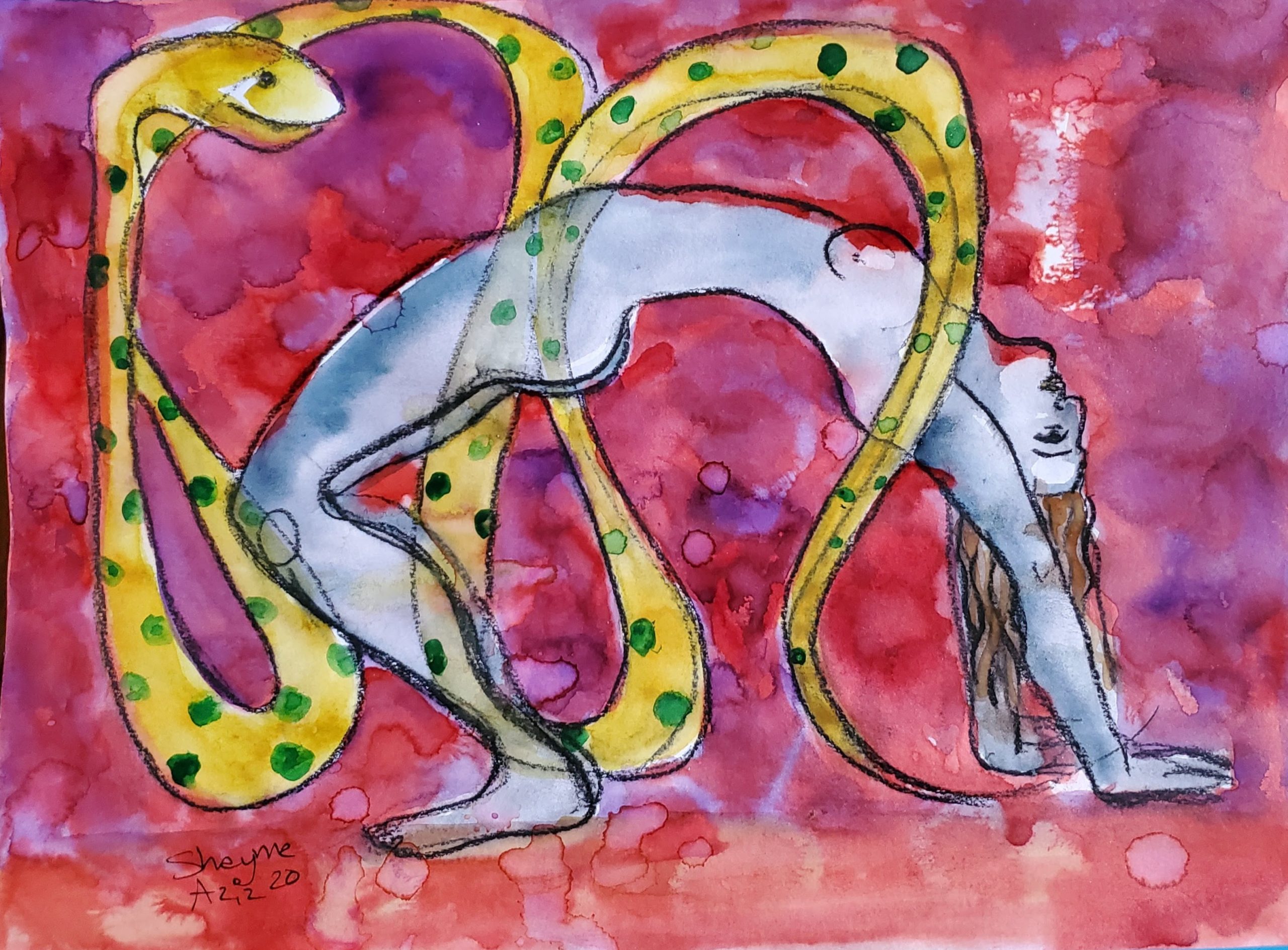 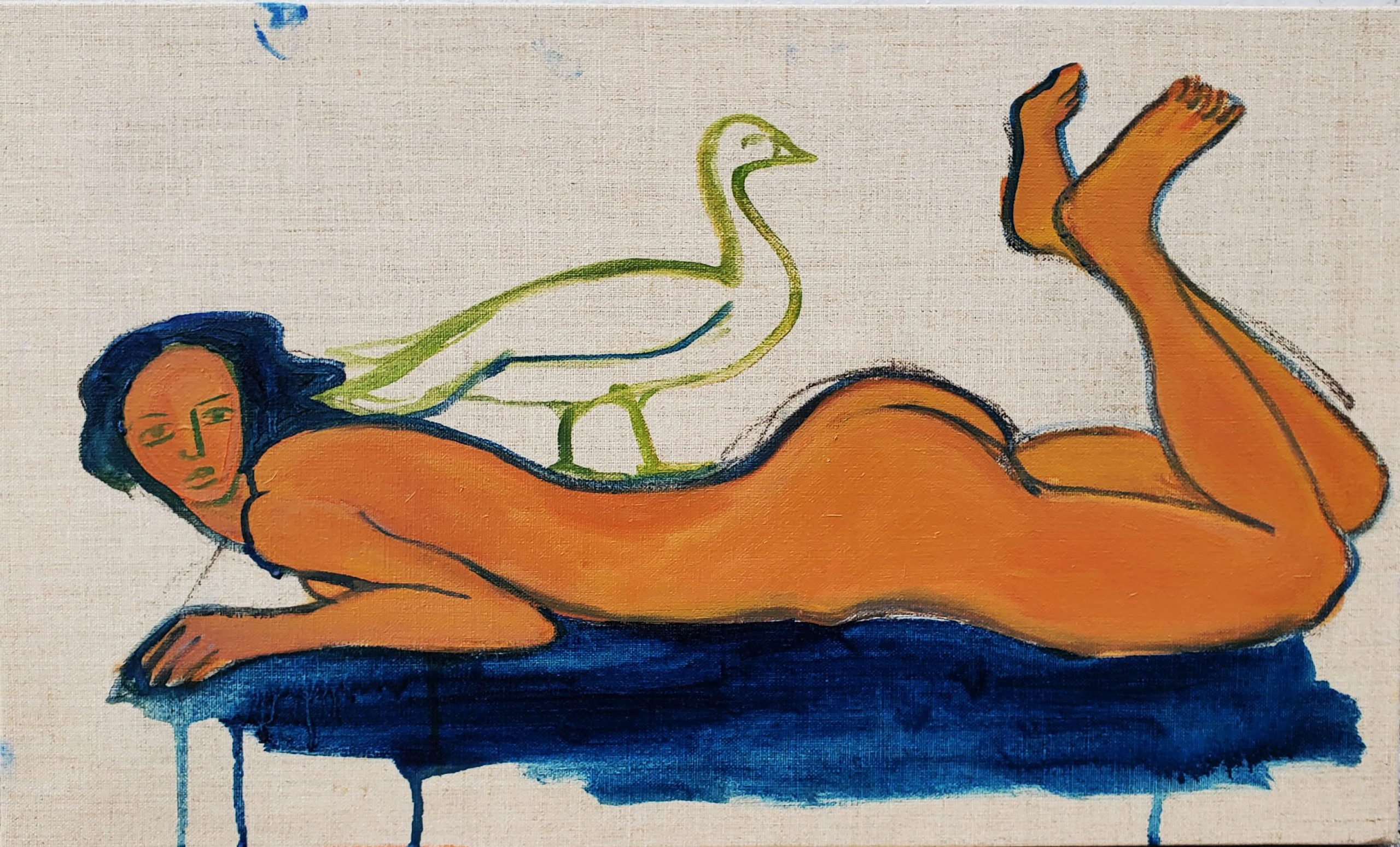 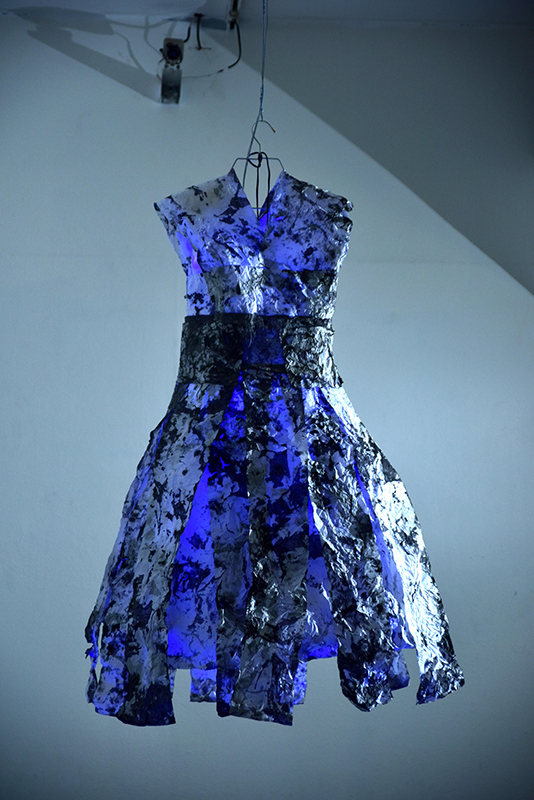 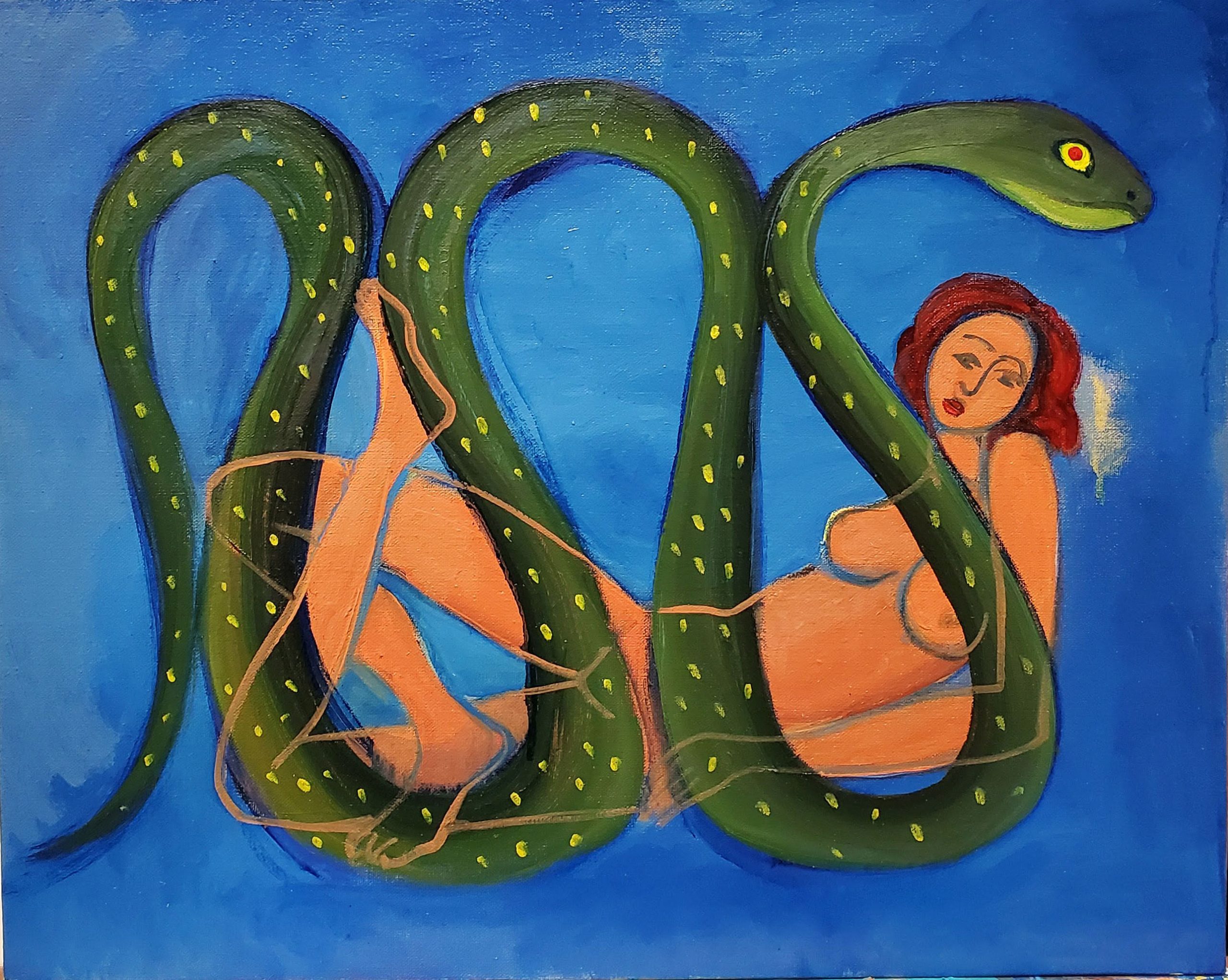 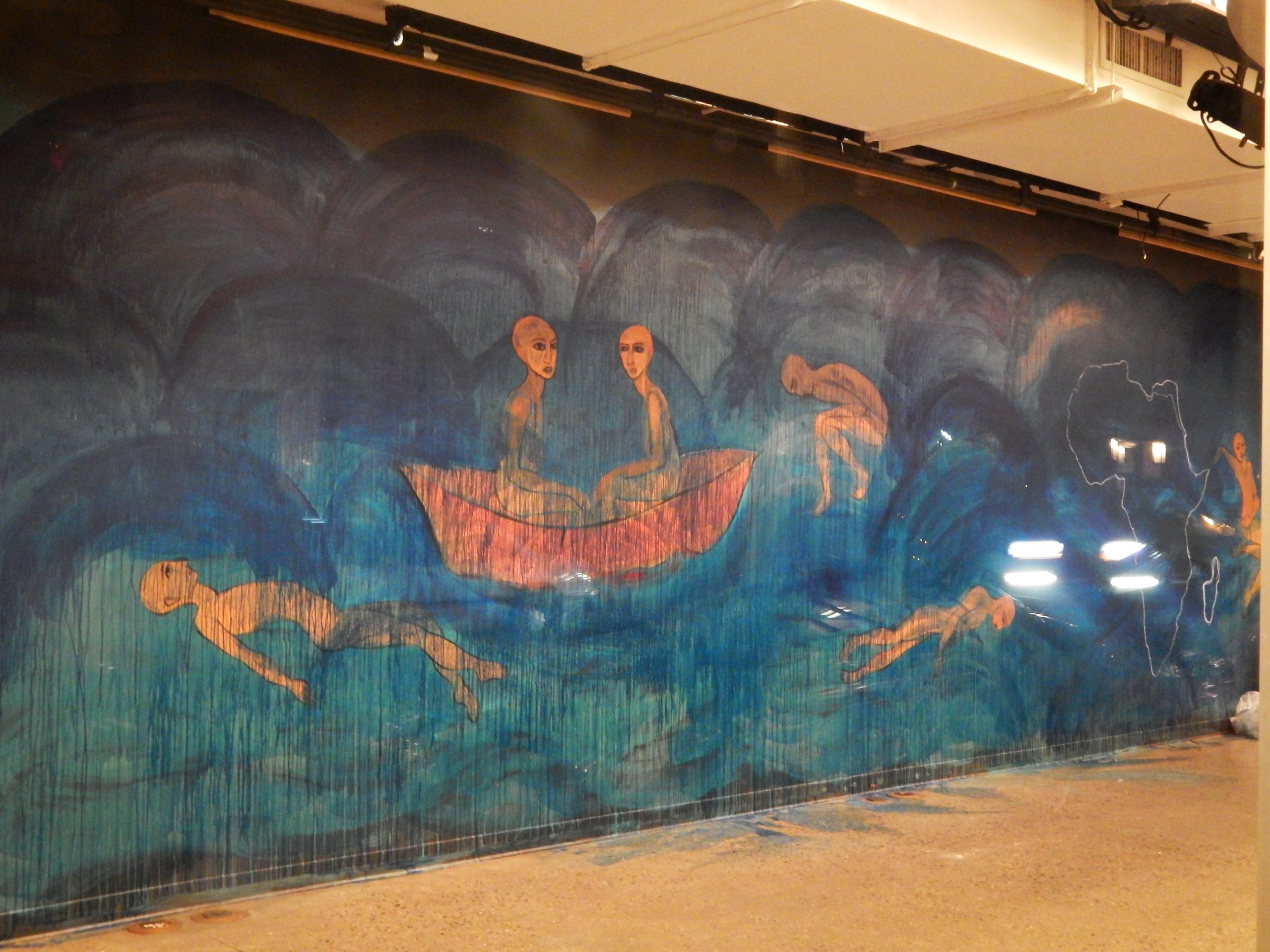 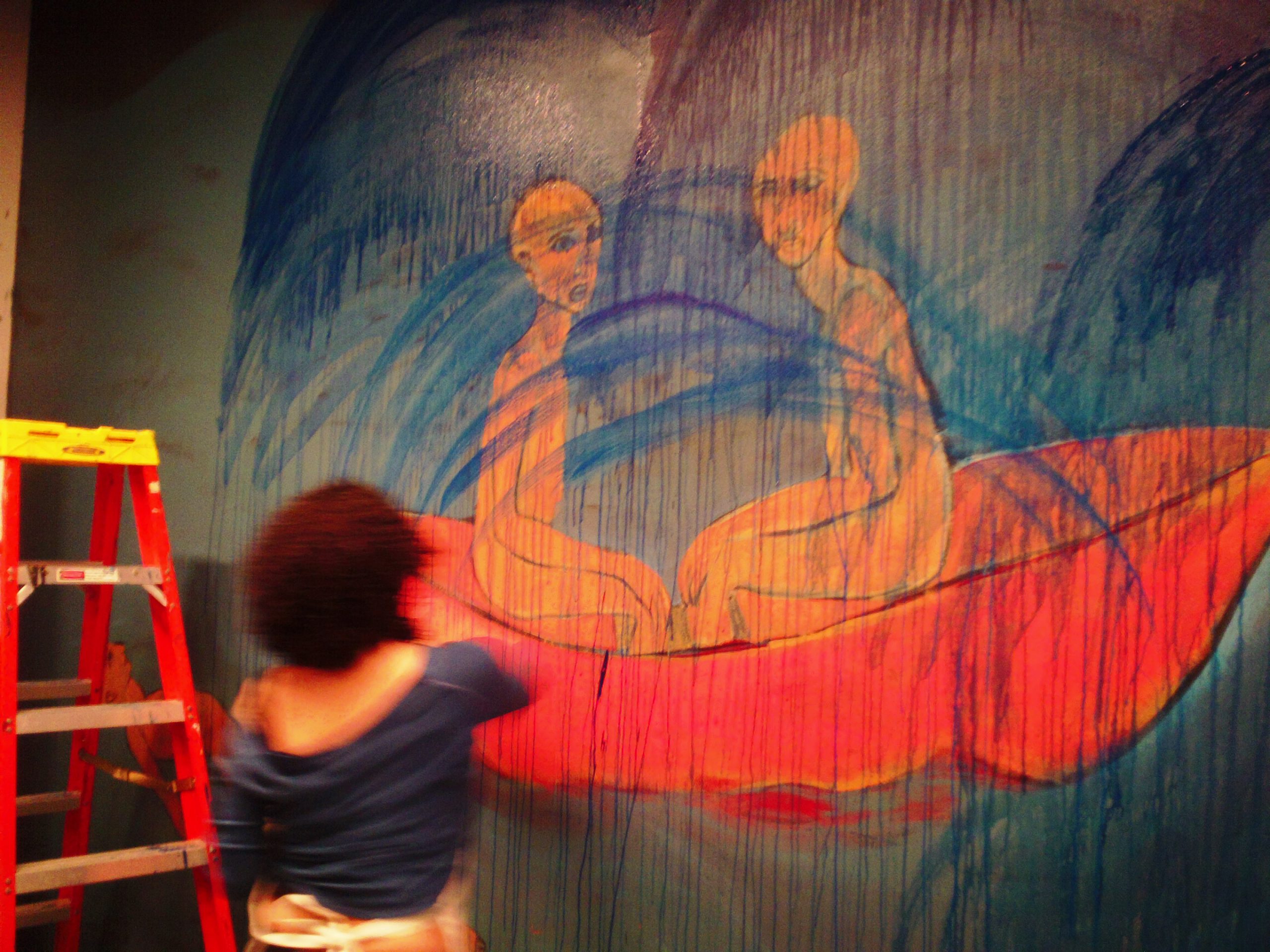 ArteEast: What has your practice/career focused on during the past five years?

Shayma Aziz: In the last five years or even more, my practice has mainly focused on the female body. Observing the streets of Cairo and how this body was being erased into a ghostly black presence has been haunting me for years.  After producing Bleeding Senses in 2015 and showing it at Galerie 392Rmeil393 in Beirut, I flew to New York to work on a temporary mural in New York Live Arts programmed for Live Ideas Festival: MENA/Future-Cultural Transformations in the Middle East North Africa Region, curated by Tommy Kriegsmann and Adham Hafez. My focus had shifted to immigration. The news of immigrants drowning in the Mediterranean sea was overwhelming me. The live ephemeral mural played on the temporality of human existence as much as its own commemoration. It was meant to be erased upon completion. The figures were depicted naked and vulnerable in dancing poses —the dance of death— then the waves of the color blue swallowed them at the end of the show. The audience came to see me painting the mural while I was at work, and the piece was called At WAR(k), and it concluded by me flooding the painting with blue paint, drowning the entire mural in front of the audience at the end of the two weeks of work. The mural lasted a week after it was supposed to due to its success with the audience. Then my focus returned back to the female body as I returned to Cairo and felt the danger of living there again in my daily life. I started looking at the smallest details that could be responsible for putting me and women in Egypt in this danger. I produced a paper light sculpture for the Form Through Light art symposium at the Palace of Arts in Cairo Opera house that mourned the disappearance of summer dresses on Cairene streets.

AE: How have you evolved or changed your work with the challenges and/or opportunities of the past few years in the contemporary global art world?

SA: The past few years have been quite a challenge. With art institutions following trends and shifting from one political agenda to another, artists with long term research projects find themselves in precarious economies. I often wonder about my work’s position in relation to these dynamics of power and fleeting economies. It’s interesting to watch what’s happening in the global contemporary art world, but I don’t necessarily feel closely connected to it. It is also not a single thing but multidimensional depending on the geopolitical events and agendas.

AE: What are you currently working on or considering?

SA: I’m working on my ongoing project on women and animal analogies: To Bestialize Her.  The idea of misogyny being embedded in our everyday language started to inspire me. Not only in Arabic, but as I discovered through my ongoing research, in English, Spanish, and many other languages. The animalistic analogies. How women are viewed in folk belief. I found it a fascinating opportunity to question my very own language for the atrocities and injustices committed against women and girls throughout the Arab region. The work explores how misogyny is so normalized and justified in our global societies through the use of language and generally in culture and religion. By the way, the term misogyny itself has no translation in Arabic. Translating terms like patriarchy or patronizing into Arabic does not yield the same meanings, and I view this in the light of how both patriarchal and patronizing practices are common within a large part of the Arab world.

I started looking into our daily proverbs and metaphors and started putting them side-by-side with the female model, figure, and subject, intertwining with each other in a playful manner that defies these analogies and owns them at the same time. What is really wrong with animals? Animals are beautiful! Why is this degrading? Is it because humans, especially heteronormative ones, think they are higher than everyone else? Women, queer people, animals, children, etc.? Well, let’s have a look at that, then. Here are the ladies and their companions, staring back at you from their canvas, bored from these simplifications and analogies, resting, challenging you to think about this before using these metaphors so easily. They gaze at you, problematizing your own role in degrading and subjugating them. Here they are.

AE: How, if at all, have you been making use of this time of self-isolation? Have there been any creative gains or challenges during the global pandemic?

SA: This has been a very challenging time for me. Although as a painter isolation is good for production, this was a highly anxious time that barely fed my creative process at all. It reminded me of the years of chaos, danger and scarcity in the time of the revolution in Egypt. Then came the BLM protests and curfew. It all felt like a déjà vu. I found myself yet again in a context of confusion and facing the unknown, following the news anxiously. To focus on survival. I made a few sketches on paper for my ongoing project, as my studio was closed due to the pandemic. It was the fleeting time I could steal from the anxiety. But I couldn’t say I’ve done something differently or that it fed my creativity in a particular way. I got very curious about viruses though, and how they behave. In general, the lockdown felt somehow familiar. Given where I come from,  touching others and public displays of affection are incriminated and/or frowned upon in most of the Arab world. And now touching others or even getting close has become a forbidden act due to the pandemic. It reminded me of my series Floating Over the Cairene Sky and the experimental animation Love Dance that I made about public displays of affection in 2010-11. I didn’t feel like I had much more to say in this regard but to mourn intimacy and the amount of death we all saw this year. Anyhow, it’s not over yet. We shall see as the next year unfolds.

AE: You studied Western art however there are strong hints to your origins in Egypt. How much has Egyptian art influenced your work and who are some Egyptian artists you admire?

SA: Yes, the curriculum in the fine art school in Luxor where I studied was established in the model of European academia, especially the French and Italian pedagogic models. However, being in Luxor gave me a fascinating opportunity to study ancient Egyptian art closely. I was fond of how they interpreted the human figure, nature, animals, food, and alphabets. How perspective played a major role in the meaning that the artwork wanted to convey. For instance, the human figure is depicted with a profile head, but the eye is in frontal angle, frontal shoulders, then the rest of the body is in profile again. This visual interpretation fascinated me and gave me a lot more to imagine as opposed to copying from surroundings as is, as the European classical art training instructs. Also, I was influenced by the Egyptian emphasis on the line as an important element in drawing and painting, as opposed to light and shade in the European school. I feel that Egyptian art has influenced how I look at things and how I juxtapose my subjects on whichever surface I’m working on, and sometimes it has informed my color choices, I would say. I admire the works of Abdel Hady El Gazzar a lot, how he drew from Egyptian folklore and openly embraced its paganism. I also admire the works of Effat Nagui, Fathi Afifi, and Ghada Amer.

AE: Art within our region has often been under scrutiny from conservative voices within the community, nevertheless, much of your work depicts the female body as well as public affection. Now that you are living in New York, do you feel relieved of this scrutiny?

SA: Generally I feel relieved to explore the sexuality aspect of my work, with my current project To Bestialize Her, and to experience more boldness in my artistic/visual approach. However, I have not yet shown any of this work publicly.

I did experience censorship in 2019, when my painting was removed from a public art show project I did with a bank. My piece was removed from its display in a metro station window because it was depicting nudity, even though it was very abstract. Besides this incident, I feel my arms are stretching wide here. I’m no longer worried, while in the process of production, about how my work is going to be viewed or who it’s going to upset.

But that incident made me think -again- about the relationship between public and private and how sensitivity to content is heightened in some public spaces, especially the corporate.

AE: Who do your portraits represent?

SA: My portraits represent everyone and no one in particular. I obsessively made them at times when I was overwhelmed with emotions on and off since I was in art school. It’s a way of looking into oneself and connecting with others. For me, portraiture is a very long tradition in Egypt that — like many other art forms — goes back thousands of years. I’m especially enchanted by the Fayoum Portraits, and the eternal gazes they convey. The idea of the anonymity of both the artist and the portrayed fascinate me. Maybe making anonymous portraits was like connecting to the artists and their subjects in the Fayoum portraits. You may say it’s a form of communication. Sometimes, people come to me and say: I know her, or I know him, or this is me. It’s very rewarding when I hear such words and know we’ve connected through a different level.