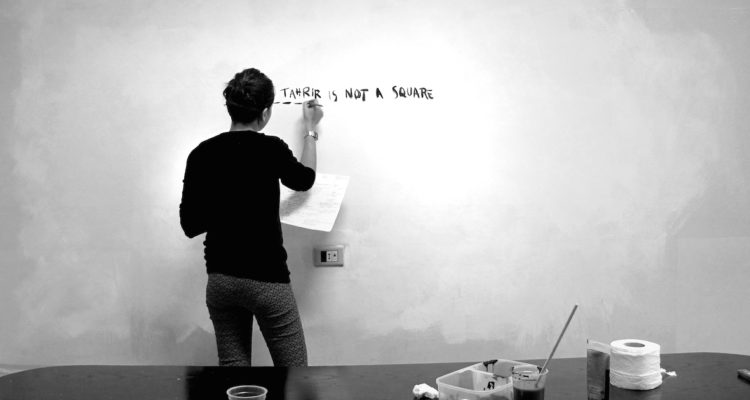 Lina: I don’t understand, we don’t have spring in the first place.

Habiba: No, I think Arab Spring came out of the Prague Spring.

Heba: Spring in Arabic is the best time of the year.

Omar: Because it was happening in March, Egypt, and then Syria.

Adelita: It came out of where?

Habiba: It came out of the Prague Spring, which happened in 1968. Revolution with no bloodshed.

Naira: Also because spring, the awakening…

Adelita: Do you feel like it is a foreign label sometimes?

Maha: It is very cute.

Lina: I don’t think there is something problematic with Arab.

Habiba: I have major problems with the word Arab in general because I feel it covers a region that doesn’t have much common history, that doesn’t have common culture, I feel like it is tied by religion and it is tied by language more than anything. Egypt in itself…I can’t consider myself ‘Arab’ to the degree that if I am referring to someone Saudi or I am referring to someone coming from the Gulf, a lot of Egyptians will say ‘Arabs’. As if they are not part of it. As if it is a separate label. ‘The Arabs’.

Habiba: No, but Arab is like…Fuck Gamal Abdel Nasser for doing it, this whole pan-Arabism thing as a concept that came out in the 1950s and 1960s and before that there were debates on nationalism, race origin and all of that but it never manifested in this yes ‘we are all Arab’, ‘we are all fighting for the same cause’,  when this whole Palestinian crisis came out, that was a major unifying force and yes we were all Arab brothers, but I feel that there are major discrepancies in terms of history and traditions and cultures, even in ethnicities, in everything. I have major issues using the word Arab. I don’t really identify with it.

Naira: Habiba, even though I agree with basically every word you just said, I still use the word Arab.

Habiba: I used the word Arab only in context of defense. It’s really weird. When I feel there is an attack and I am forced to defend the term, like if there is a generalization or a stereotypical thing about Arabs, then I’d say fuck yea, I am Arab. But generally if someone asks what do you identify as, Arab would not be a term I would use.

Lina: So for example, do you have Palestine politics, do you care about Palestine?

Lina: And I assume you are a bit pro-Palestine?

Habiba: Yes. But not out of Arab solidarity.

Lina: Ok. So just for a humanist perspective.

Habiba: In the same way I would take a stance on a conflict that geographically was…

Habiba: but it’s in the same way if there was an attack on Islam, I would defend it even though I am not religious. It only comes out in defense mode.

Lina: Sorry I am interrogating you. Do you have Darfur politics?

Habiba: Mmm… Mesh awi (Not much). Ok. [Reading] “Arab: A Semitic people inhabiting Arabia whose language and Islamic religion spread widely throughout the Middle East and Northern Africa from the 7th century. A member of an Arabic speaking people. An Arabian horse.”

Habiba: I kid you not.

Habiba: That’s a third one. There are three different ones. The point of whose language and religion spread widely is my point. That those are the two focal points. A bunch of Muslims, they speak a similar language. But I feel it has become different enough at this point where I don’t understand Moroccan, I don’t understand Kuwaiti, I barely understand Lebanese and Palestinian.

Naira: In defense of the word ‘Arab’, I don’t use the word Arab spring, not the question to what extent is it real, so in Morocco you have a lot of people who are not Arabs, in Algeria as well. The cultures are so different, all of that is true. But I think Arabness exists in an imaginary way which also makes it real. If Egypt is symbolically important to you, and something happens in Tunisia and in Egypt, and you self define, to some degree, just the very fact that you can understand the same slogans: al-shaab yourid isqat al-nizam (the people want the fall of the regime), the fact that you can have that across different countries, and people understand it, so I think even if it is imaginary or fictional, it can have real effects.

Lina: To go back to ‘Arab spring’, I don’t mind the ‘Arab’. I don’t have any feelings toward spring and I am bored of this conversation. Arab I don’t mind it because I actually feel, in fact, at some point even though it was put with everything else together like the occupys, the Indignados, I was very intentional about the fact that also what is happening here is deeply different. It’s cool that there are mobilizations, and that there are connections on the level of the type of mobilizations, them being ‘leaderless’, them being ‘horizontal’ and all that, but we are talking about a deeply different political condition, an Arab condition pertaining to post colonialism. I think we were desiring at some point during this revolution, and still some of us are, in undoing this 1960s post-colonial state, and we still are in many ways. That’s why I feel what is shared, and what’s happening in Syria, in Tunisia, in Bahrain, both the failures and the successes, if we want to use that language. So, for me it’s Arab in that sense. Something happened in the 1960s, it happened for a reason, it stayed with us, as a patchwork of an unresolved history and we are trying to do something with it. And we don’t know what it is exactly. But we are still trying and that a deeply Arab post colonial condition.