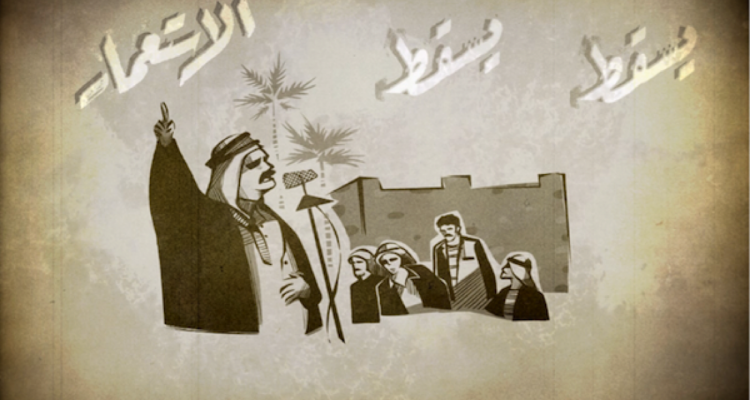 “The sea was neither stolen, nor looted (manhouba).
It was bestowed (mawhouba)”

Perched on a bench next to a rickety wooden fisherman’s hut by the sea, sits a man in his 60s, wearing a grin and traditional white Bahraini headscarf. Only ten years ago, if the bench stayed where it is now, it would have been situated some 2 kilometers off-coast, submerged in the sea. It is now part of the Busaiteen landfill, reclaimed by the Bahraini state for what was originally set to be a housing project. The narrator plays on the two Arabic words with sarcasm. The word mawhouba  – the adjective form of hiba which translates in English to ‘donation’ or ‘gift’ – is commonly used when the King bestows a state-owned plot of land upon a company or an individual. Manhouba however refers to that which is stolen. The demarcation between what is gifted and what is, in fact, stolen, goes straight to the core- the land ownership question. Who does Bahrain belong to and who has the right to bestow it away?

“There’s [also] a difference between stolen and looted land. The one to whom it was given did not loot it,” the man continues, “they give it to him as a hiba, as a reward for his loyalty, support, and pontification!”

The above scene is taken from dozens of hours of footage captured in Bahrain by a group of artists, researchers and journalists who were appalled by the volume of land reclamation undertaken on the tiny island of Bahrain, especially during the last decade. More than 70 km2 of coastal waters have been reconstituted into reclaimed land, and some estimate that the total landmass could increase the island’s total size by up to 25% over the next 20 years. In terms of relative scale, this phenomenon is unique in its size and intensity, and most importantly, appeared too much for the people on this small island state to handle.

Discontent with the limitations of academia and media in raising awareness of the grave consequences of land reclamation, they embarked on a new kind of project. The idea was to turn research into film and short animations, in a visual format accessible via the Internet to a wide range of audience, both within Bahrain and globally. Both documentary and agitprop, it would be unrestricted by the pacifying appetite of funders of culture in the Gulf – from investment banks to royal courts – who would be at the very root of the tragedy. Critical in-depth and subversive work like this are hard to come by in this region, but this pioneering work should set a precedent and will project the core issues back into domestic struggles of justice where base issues of survival and resistance against the security machine have taken over.

Although the project was conceived in 2009 and started in 2010, it was abandoned in 2011, when the February 14th uprising took everyone by surprise. The popular revolt, inspired by revolutions in Tunisia and Egypt, would embroil them and the tiny nation for many months. A project exposing land reclamation seemed insignificant compared with the magnitude of what was now happening; the killing, imprisonment, and torture of activists, the seeds of sectarian division and persecution, and the general feeling of despair. Image: map of Muharraq island in the 1960s

Eventually some members of the team would decide to re-group and give the hard drives containing hours of footage – hidden in a drawer for almost two years – to the same fisherman captured in the above-mentioned scene. He would in turn collaborate with range of directors, animators, researchers, and architects to produce a 1-hour partially-animated documentary film, narrated by him. They would agree to call it – as a working title – <em>Difan</em>; the local Bahraini word for land reclamation.

Except the man is not a fisherman per se; he is a veteran political activist from the city-island of Muharraq – this island is now four times its original size due to difan. He now spends his time on the sea either fishing or writing his memoirs. In one of these unpublished memoirs, he writes about his prison experience in 1979:

“The idea of transferring us from Jida prison was to take over the Jida island. This ingenious idea of taking over islands, coral reefs, and lands is not new. It will lead Bahrain to the great abyss, with no going back except for an earthquake which drowns the island of Bahrain into the briny salt water of the sea, returning it cleansed and pure to its people; a land buried for eternity, akin to Gilgamesh’s epic.” The prison on the island was removed to turn it into a private reserve for a member of the ruling family. His narration traverses through a maze of illustrations, one of which take us back to Muharraq in the 1960s:

“I remember Muharraq in 1965. Muharraq was always an arena for intifadas; one of them was in March 1965, which we set off against the British, the government, and the oil company BAPCO – which together controlled the country and its resources. The police chased us between the small alleys, and the people used to hide us in their homes.”

Jida is but one example of the way that land is changed and morphed to the needs and desires of the royal family. The documentary film will not be the first time the issue of Bahrain’s land reclamation would be tackled. In 2006, a PDF was circulated showing – in simple pictures taken from Google Earth – the huge gap in land ownership and distribution on the tiny island. It’s simplicity was a brilliant form of agitation, and the government of Bahrain censored Google Earth for a few days in an impulsive reaction. Modern technology allowed the average citizen to see for example, that the island of Um al-Nisan that houses a private resort, which includes a marina and golf course, is the same size as Muharraq, a densely populated island.

Ironically, the issue was even addressed by the government itself through its participation in the 2010 Venice Biennale. The installation Reclaim, commissioned by Minister of Culture Mai Khalifa, would be widely acclaimed by critics, winning the best national pavilion award at the architecture biennale[i]
.The central piece of the installation are the same exact fishermen the film’s narrator took refuge in. Exhibition co-curator and architect Noura Al-Sayeh explains how urban transformations in Bahrain have been most radical along the coastline. She writes:

“An island nation once completely dependent on the sea, through its fishing and pearling activities has today nearly turned its back on it. Nearly, albeit for the high-rises competing for a postcard view of the sea and a few disseminated fishermen’s huts searching for a slice of sea along the temporary coastline.”

Mourning the death of the coastline in this manner is as if its destruction was caused by climate change or some other natural phenomenon. Memorialising the fisherman huts like an extinct species is to avoid the real causes of the disastrous consequences of greed and decadence. Reclaim was incapable of naming the culprit, incidentally at a time when the Bahraini parliament was undergoing its most important investigation since its re-commencement in 2002, culminating in the historic Amlak al-Dawla (‘government properties’) report[ii].In their deliberations, a few MPs – both Shiite and Sunni – would mockingly blame the jinn for stealing lands.

Ramshackle fishermen huts are hardly the stuff of dreams in today’s modernised gulf. Masterplans designed mostly by big Western architecture firms leave the ramshackle and delipidated structures to the mercy of mega sea-front real estate projects in prime locations. These projects are constructed on dreams of grandeur & exclusivity. Completely alien to someone like our fisherman, these projects serve the privileged elites of the world who believe in reconstructing the dream of ‘perfect living’ on the buried reefs of fasht aljarim that used to be the most beautiful coral reefs in the world. Impregnating these new structures in the heart of these closely knitted communities that built their heritage around the culture of sea, had profound social impact. The film, shows how early murmurings of discontent began a long time prior to the infamous day of February 14, 2011, when Bahrain became engulfed in mass protests driven by explosive anger and despair with a system of entrenched inequality and discrimination. Ibrahim Shareef, a political leader, gives one of the most powerful interviews in the film and delves immediately into the inescapable role that a regime enriched itself by selling off the sea to private development. In 2011, Shareef was arrested and sentenced to five years imprisonment. Standing in front of the judge, he talked of a ‘trial of ideas’ and retold the story of a nation struggling to fight for justice.

Very few non-Arabic speakers know that Bahrain, the tiny-island country in the Gulf, is the dual form of bahr (‘sea’), meaning the ‘the two seas’. There are numerous folk etymologies, but one of them is that it refers to the salt and fresh waters that are present above and below the seafloor surrounding the island. Describing the nature of the land, the Sumerian epic ‘Enki and Ninhursag’ tells that Enki, the lord of fresh water, blessed Bahrain with springs, making a harbour of water, crops and infinite health. By the turn of the 20th century, Manama was a bustling trading port, with the sea hitting the famous bab al-Bahrain (‘doorway to Bahrain’). Today, the doorway is 3 km away from the sea. But this isn’t just about the disappearing coastline. Reclamation has crushed the sweet water channels under the sea bed, closing the tap of fresh water supplies feeding the fertile land and its palm groves. An index, published by a UK-based consultancy firm in 2011, ranked Bahrain as the most ‘water stressed’ country in the world. Where once, life on the island was self-sustainable, any shock that would stop local desalination plants from purifying sea water, would mean Bahrain has only one day’s supply of water to survive on.

Water is the essence of life. For Bahrainis, as this essence is destroyed and artificially recreated, life itself has changed fundamentally. For this island community, playing, fishing, singing, dancing were defined by the very nature and practises of play, recreation and work in the space provided by the coast, and in the long period of time that fishermen and pearl divers spent in the sea. The artificial beaches gated up in places like Amwaj Islands lie empty, but Bahrainis are not crying over spilt milk. Their struggle is not just about reclaiming the stolen sea; it’s also about reclaiming their past, and future, as one subversive <a href=”https://soundcloud.com/bu-alawi/uio7wbso6f9e”>Bahraini song</a> puts it:

The coast is gone, and even with the artificial wave breaks, what could save the soul of this island? Maybe Bahrain’s uprising was an attempt to clutch at straws before the island submerged totally in a sea of sand.

The film, ‘Difan’ (working title) and supplemental booklet will be released early 2014.

Dia Saleh, who worked in association on the project as researcher and co-editor, can be reached at dia.luminous@gmail.com.