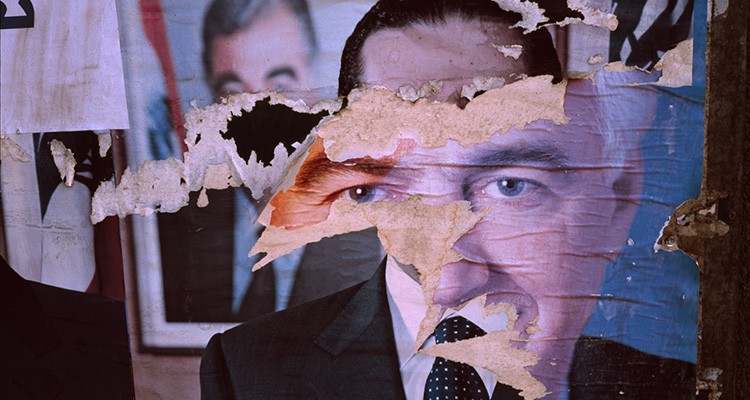 In the following fragments, complementary to a selection from serialized photographic essays by the artist, Christian Carle-Catafago will not simply introduce any work, but rather lay out the conditions under which these works were produced, along a thread of memories, historical circumstances and political events, connecting the largely diverging latitudes of the Middle East, Europe and Latin America. More than a photographer, with a keen eye for art history, Carle-Catafago travels back and forth comfortably between geographies, periods and retinal revolutions, relating the three different series from his work to specific moments in the history of Western painting and early photography. The results are often ineffable, the partial view of a distant surface, untameable, incomprehensible. – Guest Editor Arie Amaya-Akkermans The decision to capture “Monumentos a la Deriva” (adrift monuments) was triggered by the birth of my son; as a child, I used to gaze with my mother into the Mer de Glace (Ice Sea); a Glacier that lied right in front of our eyes as we sat on the porch of my paternal family’s house in Chamonix in the French Alps, picturing out in it all sorts of streets, houses, islands, icebergs as the light would sculpt and color the ice formations of the glacier above.

I come from a diverse background with Lebanese, French, Belgian and Italian roots from my grandparents: my grandfather had been a well known alpinist, member of the French expeditions in the Himalayas in 1936 and 1958, and the glacier above Chamonix had always been considered to be there as a training ground for the new generations of alpinists. In the 1990s, suddenly the glacier began to vanish, and the streets I envisioned while chatting with my mother then were not there anymore, and my mother had passed away.

Fortunately, I still had my mother’s paintings of these ice formations and their colors as evidence of those moments. I was on my way to Argentina when I saw on TV a documentary on the acceleration of the calving of Tabular Icebergs in the Antarctic; the process is increasingly accelerating and, according to the scientific report mentioned by the commentator, there should not be any more of these left within a few years.

Thus, I decided to record the presence of these giants by joining a small expedition vessel on two journeys.

Instead of taking these images with all the colors and features that modern digital cameras allow now, I bore in mind how I wanted my son to be able to contemplate the physical proof of this vision of these huge monuments. I wanted to leave slides or negatives to my son not only to view but also to possess.

I also chose to avoid perspective effects, in an attempt to not anchor the images I would take in the aesthetic paradigm of a specific time; simplicity and frontality of composition would be kept at all times. These images were taken with the horizon in the middle of the frame, the “Monument” in the center, as would have done a portrait painter of centuries past. It is for this reason that I chose black and white as medium, as every color or slide film has its own rendering and palette aggravating the possibility of being cast in a specific time of photographic exposure due to color choices.

Within these compositional constrains, I nevertheless chose two opposite framing formats: on one hand, the square, deemed neutral but in fact with strong relations of strength within the composition and a very elongated format, a panoramic reminiscent of 19th century landscape photographers. With this choice of formats, the technical difficulties mounted as I prepared to photograph with small aperture lenses, a “widescreen” type of panoramic camera that is usually used with a tripod, which is impossible on a boat, and a constantly tilting horizon, this effect accentuated with the panoramic format. These images were received by different publics with completely different reactions; when exhibited at “Paris Photo” in 2014, Europeans viewed these images from the aesthetic standpoint described above and with an anchoring in the mastery of the black and white medium, complimenting the master printer Alex Videtsky.

On the other hand, when exhibited in Argentina, these images were regarded, thanks to the title “Monumentos a la Deriva” (2015) coined by the curator of the exhibition, Ana Martinez Quijano, as making a parallel between the wanderings and ultimate fate of these icebergs and the evolution of Argentinean society over the past couple of years. In “Buenos Aires Walls”, as I joined my Argentine wife in Buenos Aires, I could not help but notice the political propaganda painted on all the walls of the city bordering high speed motorways. This juxtaposition of early-20th century painting techniques with 21st century motorway speed appeared to me as a total “telescoping” of means, place, technique and purpose of the kind described by my architecture and urbanism teacher Paul Virilio. As I decided to photograph these in color slides for personal reference, I got everyday more interested in the details of the paintings; after having shot all the large letters and punctuation in their own right, after all, at 2m of height, their presence is a striking one.

What stroke me the most then was the constant palimpsest that occurs; each political era, with money and influence defining who is able to contract the professional letter painters, defines what is written on the wall; what was written previously is not erased but written over, after years and years, many messages appear one on top of the other, a palimpsest of another sort. Upon closer inspection and with the different layers of text, the message and its purpose recedes and the details of the writing technique and painting movements that no one sees otherwise, begin to appear.

The details of the letters take on a life of their own; no longer part of a typical Western calligraphy of the 1930s, rather they seem to be extracts of an Asian minimalist calligraphy; which immediately reminds me of my mother’s training in such techniques back in the 1970s. Getting even closer, lettering and lines would at their turn fade in the background, and it would be colors and textures alone that would take preeminence: even though overexposed and outdated to the eyes of the early-21st century, these walls would exude the orangish red of the 1950s as well as its contemporary blues and everything in between. Furthermore, gestures and drippings reminiscent of the 1940s painting movement started by Pollock are conjured up.

It is because of the difficulty to accept this telescopage of 20th century history that this series has proven very interesting and inspiring to some Argentine painters, for example. All the walls series were triggered by the series “Beirut Walls” started in 2001: as Lebanon was coming out of the 1975-90 civil war, political parties, who had previously limited themselves to either very large paintings “iconizing” the top leader of their organization or small “in memoriam” of the fallen comrades, political visual culture took on a different strategy; they started filling the walls en masse all over the city with their elections candidates all the way from municipal elections up to parliamentarian and presidential, printing hundreds of thousands of posters. In the parts of the city that were previously demarcating and separating one community from another, each side would present its candidates on top of the opposing side posters. Later on, the politics took on a different strategy, hiring advertising agencies to post on official 3×5 feet advertising cards. But the previous portraits remained in place until citizens took upon themselves the task to paint white over all billboards in their neighborhood, and the political parties eventually made an agreement to remove all traces of visual campaigning in the late-2000s. In the meantime, the mentioned billboards remained in place. They were subjected to the effects of sun, rain and wind all over the city. This effect of time took a curious turn in the inter-confessional areas, where most of the posters have been repeatedly glued over posters from a different part of the city, so that strange confluences occurred: some colors shifted and blurred which political side the poster was coming from. More to the point, the posters were peeling in places and spots, letting some parts of the previous images to appear. This lead to a striking mix of features; eyes of one would appear on the face of his opponent, text pertaining to one would mix with the text of another from the opposing side. Features of a woman would blend in, a supreme drawback in a phallocratic society, with the face of a male politician. Was I the only one to see and feel these compositions as if one were seeing works by Mimmo Rotella with a twist? I was glad to be able to capture these images of Beirut Walls in a way that I would not believe someone could describe.

From Solid to Solidarity: Art and Architecture in New Cities

Variations in Place: Lines of Communication, from London to Bogotá to Dubai

By Fari Bradley and Chris Weaver

The Difficulties of Equilibrium: An interview

Reframing Art and Culture in Contemporary Institutional Practices: The Case of Istanbul