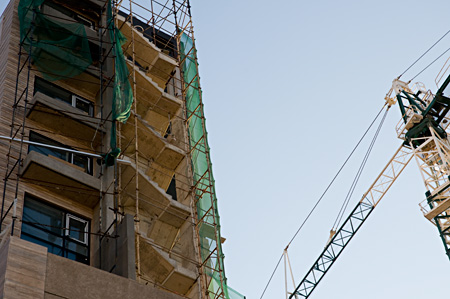 A lot happens in artistic practice by and through talking [i]. Talking about images, references, writing about the intended work, and most often, telling somebody about the work to be. The relationship between construction, two and three-dimensionality, language, the fissure between the material “reality” of structures, i.e. the physical things that constitute their structures as well as their flesh, and roles projected on to the structures… The below is intended as an exercise in form, or lack thereof. Most of the images are photographic notes (i.e. photographs I took). What happens over time to research, ideas, and images?[ii] Living between the pincers of Keten İnşaat[iv] (a construction company in Turkey) in my neighborhood in Istanbul, Teşvikiye, my calls to the local police station to complain about the loud construction happening after midnight—to no avail—, soon gave way to curiosity. After all, Keten was not just about new buildings. It was about quite literally destroying old buildings to renew the housing stock[v]. In a locale where earthquakes are common and housing has been studied extensively,[vi] this is a pretty good idea. Renew, reconstruct, remake. However, I suspect that, what Keten is selling, is something more than the seemingly innocuous, utilitarian purpose of making buildings safer against earthquakes.

Keten sells a dream-image, an image of progress, an image of the new and the shiny—the visual and verbal language they speak is one that transcends borders. The steel and the glass, the pseudo-French colonial lines of design as representing something beyond your building—it connects you with the rest of the urban fabric in other countries, other climates. This is the language that articulates that ineffable gap between the simple need of taking shelter and what a home represents. Still-image from The Dilapidated Dwelling (2000)

A roof over your head. Bricks, different types of stones, materials, cement, structure, planning, design, all coming together to produce something that eventually rots, again, over your head. Physical material rotting over a head is an immensely powerful image. This is what Patrick Keiller uses as a starting point for the film The Dilapidated Dwelling—it is a film where a fictional heroine is to investigate the predicament of the house in Britain.

There is something about the fallibility of the idea of shelter that is just so fraught; it is devastating. Materiality, tangibility, physicality, the similarity or affinity between the oddly-shaped beet root rotting on your plastic vegetable shelf and the thing that you are “living” under. This notion of living, of time passing, the corporeality of your body being reflected in the material, organically inorganic deterioration, disintegration, demise of that which you seek shelter under. Seeking shelter. That very simple, somewhat primitive instinct to both to “seek” and to “take shelter.” The building of Ashkal Alwan, where I’m currently a participant in the Home Workspace Program, is on the second floor of a three-floor, formerly industrial building. On the first floor is a garage and on the third floor is an architecture office. Sandwiched between these two spaces with two very different functions, I am compelled to think about what makes a space operate as intended. The roots of the institution, Ashkal Alwan, is in the public space. Twenty years ago, Christine Tohme, the current director of the institution, was one of the co- organizers of an exhibition of art works in Sanayeh Garden in Beirut[vii] to activate the public space and to be in dialogue with it. The architectural design of Ashkal Alwan somewhat mimics these concerns with the public space through various elements. The floor tiles are reminiscent of cobblestones, extending the outdoors space inside and vice versa. The offices have glass walls, contributing to the feeling of an open space. The institution is open to the public six days of the week. There is a library with an easily accessible WiFi password that is again, open to the public.

The building that Ashkal Alwan inhabits is among car garages, new developments of high-end apartment buildings, and Souk el Ahad, a weekend market. The columns pierce through the three floors (or you could say, holding up the three floors), the infrastructure that is shared by these spaces with such distinct tasks. These columns denote a state of being a space, an acknowledgment, a demarcation of the space being supported within a physical structure.

Leading me to the tangential question: is education enforced spatially? What is an educational space? What are the spatial elements that make or unmake an artist, an institution, an education, a situation, and a practice? The photograph from Ilhan [viii]

Taken at the Ankara Train Station in 1995, the photograph of an art work by Aydan Murtezaoğlu. Setting aside the beautiful indifference of those waiting in the station—as they are not there to view work(s) of art, they are there because they are waiting at the train station—, the image encapsulates this somewhat temporary intervention in the space that both interrupts and continues the space as is.

This half-finished column or sculpture—however you choose to describe it, (it is both and neither)—, makes the onlooker aware of the particular space, which they are inhabiting. We are looking at a space and it is this thing that makes us aware of that which makes up the space: columns, walls, floor-tiles etc. This temporary awareness of our perception or inhabitance of the space—even though in our case, this mediation is through the photographic space.

On the other hand, the swift integration of this piece into the space it is in, as something that could be a part of the space, makes us aware what constitutes a space—by adding an element that reveals the structure of what it continues and echoes by the seemingly simple action of mimicking. “not a concern. usually
used. Heavy-door-metal
queen spat on snow.”

Adnan’s deconstruction of language is hard to ingest at first. The words, interrupted, rearranged, at times left alone to convey their meaning, at times juxtaposed to form a landscape of simplicity. Adnan reveals language, structure, forming building blocks that make readers aware of that which constitutes our vocabulary of the day to day. She deconstructs to construct, her pieces of words, of sentences come together to form a meta-structure that both envelopes and cradles the reader. What could be a better form of inhabited space? At times it is impossible not to conflate your own body with what you are thinking about. This can lead to crude juxtapositions, illustrations of ideas. If I consider my own body to be a building of sorts, with a tangible, physical framework that holds intangible as well as tangible things together (emotions as well as infrastructure), then I could assign roles to the different parts of my skeleton. While my spine could be the main column of the building, my eyes window sashes, my nose could be the gutter. This construction site is huge. It is also kind of amazing within the topography this particular neighborhood because it is stuck between the Vendome stairs leading to the once largely Christian working-class neighborhood of Geitawi and a large French colonial-style building. So when you are going up the stairs, you can peep into the construction site, the stairs mimicking the erection of this new building.

I wonder whether it would be possible to collapse these competing levels of experience somehow to capture this site. It is a site. Something takes place there. Would it be possible to draw a parallel between the three-dimensional, self-encapsulation of the site and that of a camera? Could this site be transliterated[ix] into a two-dimensional image, the way a camera transliterates what is experienced in a moment in time to an image through the mechanisms that it hosts?[x] Is the construction site a type or form of camera, recording time and images? Is this point of comparison visual (as both the site and a camera are like semi-closed boxes) or is it because of the collapsing of different times and spaces in the two (the camera and the construction site)? Any place that you are new to, watching is a big part of getting used to the place. Watching so that you don’t make a faux-pas, watching so that you know where you are, watching out of curiosity, watching because you have nothing better to do. My balcony in Beirut allowed me to watch for hours at a time, through curtains, half-open windows or tracing voices in languages I can’t understand. The constants are the houses that are either abandoned or currently unoccupied, opening themselves up to my projections of why I think they are empty. “The view from above.” Highrise is a feature-length documentary on penthouse apartment owners in Brazil. On the one hand, the detachment of the penthouse owners in Rio de Janeiro—a very specific place and situation—from the city and context they live in is so extreme, it is not possible to take them seriously. They are, merely, caricatures of a social and cultural class. A critical element in the film is the relationship that these people built between the physical location of their apartments and their perspective of themselves in the larger framework of society. Physical space, its specific location and separation, the violent means through which it was created (labor/war on the poor) and sustained as separate all become painfully visible through the interviews with the tenants. To put it simply, penthouse equals not only social status, but also a form of blessed state of being, an omniscience that “they” (the penthouse tenants) truly appreciate. An apartment’s ability to grant to its owners these “powers” is remarkable and I suspect that this is not specific to the vanities of these particular people—they are merely an extreme rendition of our attachment to the four walls. View of the floor at Galerie Tanit (Mar Mikhael, Beirut, 2015) Some images tease you with things that are guaranteed to evoke some sort of pleasure, even if it’s a guilty pleasure. Right above is another photograph from the window of my room. Beirut is quite a fertile ground to take photographs of abandoned buildings, some more dramatically abandoned than others—if such a thing is possible—, reminding you of lives past, lives that were, satisfying every voyeuristic fiber in your body. In this sense, there is something about the “pornographic” aspect of these images. They stimulate not the corporeal per se, but rather that easy, superficial pleasure derived from photography, which functions as a window into stories and things that we want more of, without even knowing why precisely.

I suspect there is something similar at work between our gaze into the spaces that no longer are fully functional and the spaces that we want to inhabit. Spaces that define and in turn are defined by the dwellers, the perfect merging of temporality and spatiality, of notions of being and becoming.

Merve Ünsal is a visual artist based in Istanbul. In her works, she employs text and photography, possibly beyond their form. Merve holds an MFA in Photography and Related Media from Parsons The New School of Design and a BA in Art and Archaeology from Princeton University. She is currently a participant at the Homework Space Program 2014-15 at Ashkal Alwan, Beirut. She has participated in artist residencies at the Delfina Foundation and at the Banff Centre. Merve is the founding editor of the artist-driven online publishing initiative m-est.org.