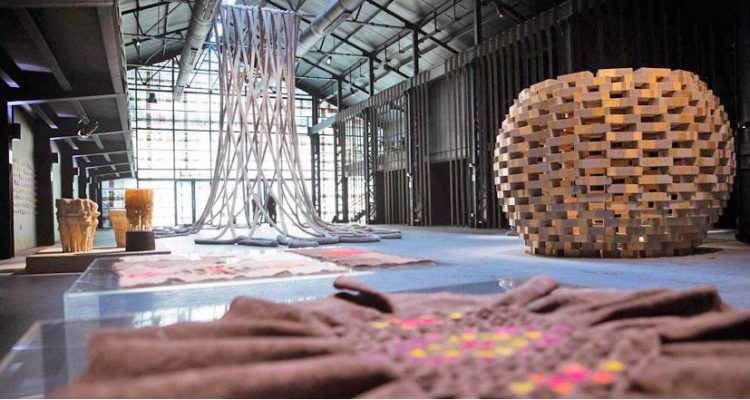 Among a burgeoning wave of design weeks in the MENA region, Amman Design Week is launching its second edition on October 6th, with reflections on Movement. The nine-day series of thematic events will be held at the Hangar exhibition space, Ras Al-Ein Gallery and al-Hussein Cultural Center in Amman’s old Downtown, with multiple ancillary events taking place in other parts of Jordan’s capital.

When ADW was initiated in 2016, its organizers hoped that it would establish Jordan “as a recognized hub for design, creativity and modern Arab culture.” The aim of the debut event was to bring together local and regional art and design and to situate them within an expanding global dialogue. Despite the gradual development of Amman’s art scene over the past several years, ADW marks the state’s official move to formalize its cultural real estate. Its first city-wide event was made possible with the support of Queen Rania Al Abdullah—which in turn attracted interested sponsors and media—and a strategic partnership formed with the Greater Amman Municipality. Installations, workshops, and events activate various parts of the city where art is displayed within both enclosed and public spaces, often subsidized by the municipality.

In a recent conversation, Rana Beiruti, co-director/founder of Amman Design Week, underscored four main pillars that form the foundation of the project. The first is to feature work which is inherently regional or engages with the local community. The second emphasizes the educational capacity of ADW through workshops and lectures which present craft practices as technical processes of making and manufacture. The third ambition of the Design Week programming is to establish a network: connecting artists to manufacturers and various opportunities, the local public to a world of design, and linking distributed city spaces to formalize a navigable design scene. The fourth pillar propping up ADW is the need to address design as a tool for problem solving—at the scale of the city and the individual. Rana also pointed out the importance of formulating an overall vision for ADW, especially in a city like Amman that lacks the economic capital of its Gulf neighbors and is limited in material and creative resources: “everything is studied and attached to the environment, community, and the situation we are in.”[1] Amman Design Week is realized with an awareness of the challenging environs surrounding it as well as the opportunities that arise from those challenges. Artists otherwise hindered by the practical impediments to sharing work (including Amman’s own circuitous bureaucratic permitting procedures) are enabled to make and make work public in the context of ADW, but it’s Rana’s belief that they are most equipped to take on such challenges precisely because of Amman’s difficult creative terrain.

If the inaugural ADW forged an introduction between Jordanian publics and a regional design culture, this current iteration is attempting to create “a Movement,” and transform the interest generated in the previous year into something collective and consequential. However, Movement as a theme is not unique to ADW. Similar explorations have been taken up by other design weeks in the region: Saudi Design Week, taking place around the same week as ADW, advances the theme of Design in Motion, and the Sharjah Biennial’s central theme of Tamawuj literally means flowing or wavy undulations. While some are translating movement more literally than others, Amman Design Week invites its participants to interpret the theme in expansive ways “whether physical, intellectual, cultural or social.”[2]

It is ADW’s essential push towards collective consciousness (if not action) that would wrest  Amman’s existing art scene from its (bourgeois) urban underground and position design as part of more inclusive national and global conversations. The implicit question leveled by the 2017 program is how can Amman become a site of improvement rather than conflict? But ADW’s endeavor toward optimistic vision discourages more critical interrogation of political issues by designers.

Not immune to the effects of regional conflict nor its own internal unrest, Jordan has been struggling with attempts to use neoliberal development as a method to salvage the country’s economy, amid a growing desire by local communities to vitalize the economy from within. Rather than look past the conditions directly contributing to the shifts in the country’s political, economic and social terrains, Amman Design Week becomes a platform where these issues can only be addressed through a benevolent lens. Here we understand the generic impetus of movement—as opposed to more pointed political connotations of “a movement”—to reveal the relatively apolitical course this iteration of ADW has taken, in which material and technical progress is favoured over less obsequious problem-solving. The technological is always imbricated with the political and is constantly in need of modifying and redefining existing politics in order to move forward.

It’s difficult to talk about change and raising a collective voice without also raising that voice towards a more concerted political will. ADW has an opportunity to present technology, design and local crafts not only as cultural innovations but as tools for social action. While we can anticipate the Hangar Exhibition to exhibit work with subtle social messages, it is in more rare instances like ADW’s collaboration with Darat al Funun and the design label “Disarming Design From Palestine” where advocacy is pursued more explicitly. DDFP is an educational and artistic exchange between the Netherlands and Palestine aimed at disseminating alternative narratives about contemporary Palestine and encouraging political discourse through design and craft. ADW worked with DDFP to feature works by Palestinian communities residing in Gaza Camp in Jerash, a chance for artists and designers to collaborate with communities from the Palestinian diaspora. This initiative is incubated at Darat al Funun’s “Lab” space and will showcase design work by a community that is integral to both the Palestinian and Jordanian identities. Disarming Design From Palestine. Watchtowers and Water Tanks Game as demonstrated by Wisam Hourani. Courtesy of Flanders DC for Design

During our talk, Rana recalled an instance from last year’s event in which they were able to provide access to technology, a kind of work she deems advocacy for artists.  In an attempt to bring in some 3D printers into the country for a workshop, they ran into complications getting the imported equipment approved, a process that required a multitude of paperwork and the approval of many bureaucratic entities. After several meetings with various authority figures they were finally able to lift restrictions on smaller 3D printers and greatly simplify the permit process. This instance evidences the capacity ADW has to stage real movement—in this case, the law becomes implicated in the advancement of design technology.

Of course, Amman Design Week’s ability to initiate legislative change has a lot to do with their strategic partnership with the Greater Amman Municipality and the support of Queen Rania Al Abdullah. Although this partnership helps to legitimize public art and foster public interest in it, it risks other state influences: those which moderate the power of art and design to act politically. Consider, for example, the access artists have to public space. In Amman, the conventional approach to policing public space is to monitor and censor. How can public and cultural spaces be both occupied and policed when they are transformed under more or less permissive forms of state patronage? From its pop-up Crafts District at Al Hussein Cultural Center to its mobile Makerspace, ADW is able to inhabit more city spaces while bypassing the ambiguous bureaucratic protocols the government has put in place for doing so, a complicated step that an independent artist could not avoid. ADW’s role in mediating between designers/artists and the various arms of the state apparatus provides a legitimate distance, a cover for other public and spatial investigations in a city where many public spaces are either off-limits or too difficult to occupy. While it is difficult to know whether contributions considered too subversive for state approval have been omitted in the curatorial process, ADW claims that they have never felt the need to censor a participating designer or artist.

Amman Design week certainly presents an opportunity for new engagements with and within state sanctioned spaces, but it remains to be seen whether its curators will permit more explicitly political proposals in the upcoming event and as they move forward. An effective exhibition has to be reflexive and sensitive, not just projective. ADW provides necessary accommodations for innovative work, but its best iteration would establish a forum for emerging voices to design critically and towards more deliberate social change.

As ADW grows, they may be provided more opportunities for state support and corporate sponsorship (and with it potentially more strings), but they may also accrue the kind of international respect/recognition that brings autonomy. Hopefully it is an autonomy that can motivate critical design acts and consequential futures for a Jordanian design culture. We’ll see what kind of movement arises.