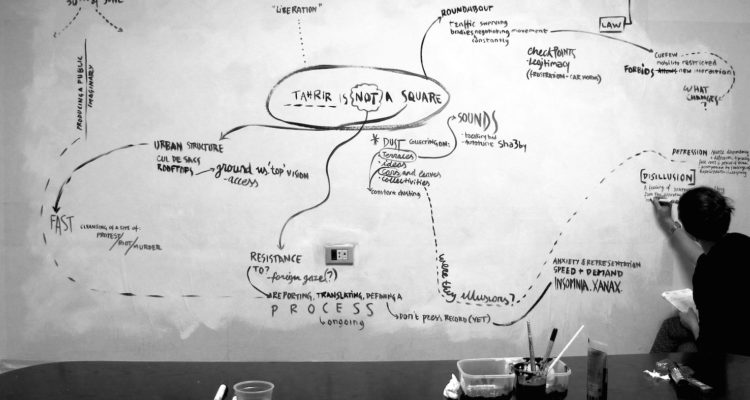 Habiba: Speaking of deeply, I hear, not that I have actually researched it, there is a lot of controversy around the ‘deep state’. I heard people debate about it. I was wondering if that was an issue with you guys.

Heba: I think actually ‘deep state’ is a bit less problematic, it is actually not to use old regime, because old regime gets confusing with all the regime changes. With the regime returning, so you don’t want to imply that it is not there anymore. But with deep state, it doesn’t bear any meaning other than it is the deep state.

Naira: And it points to continuity. The deep state never disappeared, right?

Habiba: We need to define the ‘deep state’.

Adelita: It’s also in certain political theory that it used.

Lina: I think an extension to that is the very use of the word state and how interchangeably we are using it with regime or with government. I think I edited yesterday a story about the contention between Al-Azhar and the Brotherhood and the state over Al-Azhar and I used the ‘state’ so many times an intercheagable word with the ‘police’.

Heba: But do you have a problem with it?

Lina: With the deep state or the use of state?

Heba: With the use of state in that context.

Lina: I think it needs to be unpacked. I have issues with believing the extent to which the state is really ‘deep’. I think it is a question of strong bureaucracies and weak state, strong bureaucracies that exist in sylos.  So deep state becomes an inaccurate term somehow. In a sense, it gives too much prestige and coherence to something that is not coherent.

Habiba: So, it came out of the Turkish political context. The one definition I could find is it’s a state within a state in a political situation in a country when an internal organ, generally from the armed forces, or the intelligence agencies, or the police do not respond to civilian leadership.

Adelita: State, regime, there’s another word that came up, and then, kind of deep state. Should I have it somewhere else underneath?

Adelita: So as words that can be used to describe the current situation but shouldn’t be really interchangeable.

Naira: I remember for example one of the copy editors sending an email to the rest of the team during Morsi’s presidency saying can we not say ‘Morsi regime’. We would refer to the ‘Mubarak regime’, but not to the ‘Morsi regime’. The ‘Morsi presidency’ was her preference. So regime has particular implications of being totalitarian. You know, you don’t talk about the Cameron regime in the UK.

Adelita: No. Although you should.