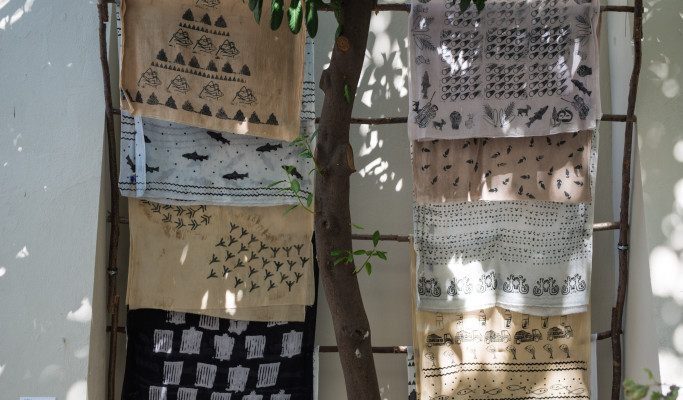 “I’ll give my life, I won’t give up my water!” cries a voice (dubbed “Crone Who Went to the SHP”) in the publication that Istanbul-based artists İz Öztat and Fatma Belkıs penned as part of their collaborative project Who Carries The Water. The research-based installation was initially commissioned by the 14th Istanbul Biennial in 2015, having its second iteration in early 2017 for the 13th Sharjah Biennial. The Istanbul-based duo adapted the materials they used in the initial installation for the Persian Gulf’s natural habitat. In both versions, the central narrative stems from grassroots struggles that local residents carry out in various Anatolian villages to preserve the wild life and water resources in their surroundings. Threatening the environment and affecting the continuum of day-to-day life, steady attempts from the government and corporations to build run-of-the-river hydroelectric power plants in different parts of Anatolia urge these communities to take action. Who Carries The Water visualizes these noble efforts through a diverse visual pattern that celebrates the rural abundance of color, material, source, and creativity. Using local craft techniques and natural materials—such as hazelnut sticks from the Loç Valley in Northern city of Kastamonu in Turkey and date palm leaves from the Gulf Region in the United Arab Emirates, the duo weaves a tale of resilience and solidarity in conversation with personal histories embedded in residents’ everyday lives.

Although Öztat and Belkıs have pursued solo careers as artists involved in research-oriented multimedia practices, the impact of collective resistance against governmental and corporate attempts to destroy natural and social resources united them. Their dialogue as artists living and working within an akin circle for many years shaped into a collaboration in response to a mutual interest in resonance of water for relentlessness and freedom. The duo embarked on the project after listening stories of villagers, among which are mostly women, determined to protect the integrity of water—a substance pertaining to fluidity and fertility. Various trips the artists took to different parts of Anatolia unveiled countless stories that resist waning in the face of oppression and limitations. They collected oral histories from local residents about the urgency of the issue they fight for and how their resistance has still withstood. Construction of hydroelectric plants in valleys where thousands reside and earn a living would spoil the natural and historic habitat in addition to aggravating climate change and decreasing the annual crop, as many emphasized. The artists observed that the impact of such construction projects had already troubled many lives in the region. Personal and collective stories that would otherwise disappear over time guided their subtle, but eloquent project that embodies the enduring legacy of resistance. Through an ecologically-conscious approach, Öztat and Belkis depended on natural and social diversity of their subject matter in creation of their installations; they used almost no electricity to emphasize the hazards of power plants built irresponsibly. Hazelnut trees—grown in Turkey’s Black Sea region in numbers vast enough to mark the country as the world’s biggest hazelnut provider—form the skeleton for the project’s Istanbul leg. Dozens of hazelnut sticks hoist a series of colorful hand-printed kerchiefs. In addition to their regional prevalence, the sticks remain the primary defense tool among the local community in cases of police retaliation during protests. The artists utilized them to maintain the integrity of their installation, encapsulating the local reliance on this material, while underlining the inhabitants’ fight and dependence on nature. The sari yazma [yellow kerchief] is worn in everyday life by the women of Loç Valley and has been a symbol of the struggles since 2010. In the installation, kerchiefs, elaborated with different motifs, loosely drape over the hazelnut sticks. Reminiscent of political banners or laundry left to dry, these kerchiefs echo the fluidity of water with their free-hung displays, conveying local opposition through woodcut prints of figurative and abstract patterns such as hawk masks. Comprised of a group of women from Arhavi Doğa Koruma Platformu [Arhavi Nature Protection Platform], Kadın Atmacalar [Woman Hawks] are frontiers in resistance against construction of power plants in the region. The artists pay homage to hawk masks worn by group members during resistance, adorning their kerchiefs with bird of prey mask imagery. The Sharjah version of Who Carries The Water benefits from the regional vegetation where date trees grow in abundance. Commonly used for production of utilitarian objects by locals in the Gulf Region, palm fronds from these soaring trees substitute for the hazelnut sticks, expanding the dialogue between Northern Turkey and Sharjah.

Evident in both installations is judicious integration of two isms: social realism and magical realism. In doing so, however, Öztat and Belkis manage to avoid utilizing either to establish a formal structure. These two creative approaches to realism—particularly adopted by twentieth century artists, writers, and filmmakers to render socio-political landscapes in stark reality or eccentricity—accentuate the work’s narrative with doses of civil activism and pastoral surreality. Although two genres pose distinct at first sight, a closer look reveals their interconnectedness in terms of portraying the everyday type as a socio-political entity—resilient, ardent, and wistful. Kerchiefs with their whimsical patterns embellish hazelnut sticks compiled within a mysterious cohesion. The evident influence of local myths and fables that have been orally transferred over generations emerge in the project’s print component. As a textual culmination of the research the artists conducted en route to their main installation, the conversational text gives voice and accords agency not only to local characters, but also to nonliving “things” around the region. The installation conveys potency of watching a Vittoria de Sica film, in which social and political catalysts determine the plot, or reading a Gabriel García Márquez novel with its murky distinction between reality and fantasy. “Instead of treating materials and processes as means to an end, we tried to stand with them, allying with their already established qualities and powers to signify,” the duo stated in an email conversation about their decision to remain distant from imposing conclusions on social matters or stripping their materials from their utilitarian charge in order to romanticize them.