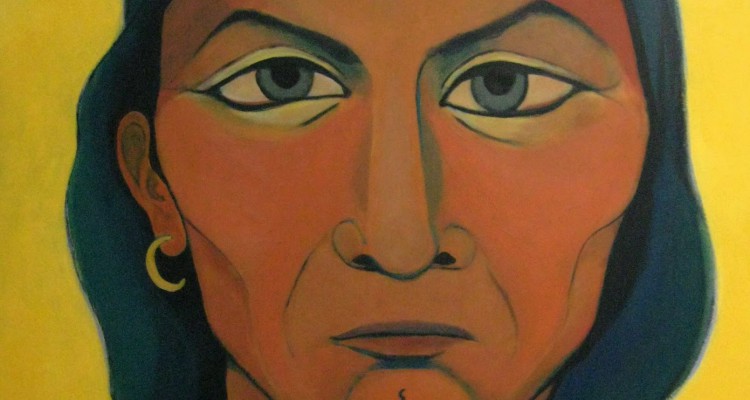 “The painting flashed one night through my head, as I was in my studio in Cairo. I was passing some time reflecting on old works of mine, studying how I used to see things”. Artist Shayma Aziz was saying, while she sat in her studio, with very dense noises coming through from the window that overlooks one side of Tahrir square. “Shame” is the title of her latest work; a portrait of a majestic old woman that looks to the viewer, aggressively. And while generally there may be no novelty in this, the particular context of the work, and of arts in Cairo reveals complex questions this work could be raising.

The woman did exist. Fawzya who was depicted in this work was a maid at the Fine Arts Academy in Luxor, Egypt, which is where the artist spent her early student life as a visual arts student. The elderly lady sat for Shayma Aziz, to model for the first time for a painting, upon request from the young artist over a decade ago. After years of living within the walls of this institution, Shayma thought that perhaps the lady used to be one of the models during the golden years of the academy when she was much younger (and the academy was too), and later as the educational (and the cultural) infrastructures of the state started to grow old and deteriorate perhaps then Fawzeya decided to stay within the building’s realm, and grow old there into a maid that just maintains the place and is reminded daily by what it was. But, aside from how romantic this story could be, nobody knows the truth, or who Fawzeya was beyond that she cleaned around in the building of Fine Arts in Luxor, and after that first session with Shayma Aziz, Fawzeya started sitting for many students. She became the main model for old figures and characters. Time passed by, and the artist moved to Cairo, and for years worked in her little studio by Tahrir, until she received the news of the death of Fawzeya. To anyone, this news would not be of any grave consequences. Yet, to Shayma Aziz, the news of the death of the old lady was felt as a strong reminder of ruptures, of lapses, of things we lose without knowing, or this that we hide well, and hide away from. And, while the artist was studying her own puzzlement at how she ‘looked’ at things and how she now is experiencing a shift perceptively, the news of the death of the ‘model with great presence’ and the disappearance of her many stories, the news echoed with the rupture the artist is witnessing in her own practice as a painter and as a visual artist. “I was thinking of social conventions, traditions and the moulds one is put within, not just as a woman but also as an artist”, the discussion with the artist continued, “and wondering about her, about how she felt as we all looked at her, with our gaze shifting when we look at her, once seeing her as the model, and once as the maid. She is the woman from upper Egypt dealing with social conventions that limit the possibilities a woman could enjoy in a lifetime, and she is the woman taking care of those studios full of paintings, dreams, drawings and projects of men and women challenging conventions. I wondered what conventions we thought we were challenging at that time, and which conventions we ended up in negotiations with now.”

The work is a painting that is aware of being looked at, as it looks back at you. It stops you from moving forward, from doing something, in the name of ‘Aiyb’. ‘Aiyb’ or ‘Shame’ in Arabic, is what’s tattooed on Fawzeya’s chin in this painting, and which is the title of the work also. One wonders if the artist’s depiction of this intense personified gaze is only part of her engagement now on how to ‘look at things’ (that troubled the artist suddenly as she worked on this painting), or how it deals with shame within an artistic practice, or how it deals with the position of women in conservative communities.

The 1990’s in Egypt witnessed a boom in the contemporary arts scene, because of the alignment of several vectors, agreements on ‘social development’ and culture funding to the Euro-med region, and the many institutional relations that were forged at that time between Arab capitals and the European and American art markets. Beyond the scope that this text can cover, many institutional maps and alliances of the here and now were the result of that ‘boom’. Taste and references were reset at that moment within the institutional realm. In the Egyptian contemporary arts world, one is expected (since this reconstruction of the non-governmental independent scene) to produce work that deals with contemporaneity in a very particular way. A way that may be shaped by other histories and references that do not necessarily stem from Egypt. A way that has to do more with international cultural policies rather than local interests. Certain practices would come in and out of the limelight, and certain schools of thought too- just like at any moment in time at a given place going through institutional realignments and ruptures. Artists interested in drawing and painting, would gradually move to producing video and installation work, for fear they may not be framed as part of the ‘contemporary boom’, or its extensions and institutions. Such extensions continue to shape the local scene and its actants. The ‘market’ was never the same. What is considered to be beautiful, and the notion of beauty itself would soon be challenged by what is seen as critical and political, as if beauty and criticality are irreconcilable polarities. Photo of the Artist Shayma Aziz

Going back to the work ‘Aiyb’, the artist said that she has recently been revisiting texts of Lacan, and meditating on different works dealing with the gaze to understand again how to look, to frame, and to invite the viewer. Shayma Aziz is perhaps in the process of displacing herself back to a moment when she dealt with beauty differently- in her work as a painter living in Luxor- before she moved to experimenting with ‘different ways of seeing things’. In this work, she attempted displacing herself and thinking from the cosmopolitan gallery-goer perspective, and the local, embodied and gendered subjectivity perspective. She further continues to displace herself when she comes to contextualize her piece. She mentions the society and how it looks at women and upon the body of the woman, be it on canvas or on the streets. What is the position of women in Egypt now? More concretely in relation to this work: What is the position of women in a painting now? What does one depict, when a woman sits for a painter?

In this line of thinking, ‘Aiyb’ opens questions on beauty in contemporary art, and its place between desire and shame, between distance and embodiment. The presence of an old woman aggressively looking to the viewer is a question on how women are depicted in painting in Egypt, with the context of how women are situated in the current state of affairs. Picking up from there, Fawzeya’s presence builds a case on seeing, on visual pleasure, and the presence of women in Egypt now. The question of visual pleasure is something that the artist here is clearly dealing with; an aggressive female face, painted with the craftwork of a ‘fine arts’ hand. The depiction of the female body in painting generally has been and still is a notion troubling female artists. With the male gaze expecting (and producing) women as beautiful objects in painting, a female artist is bound to confront such institutions. And while this may have always occupied women artists, they have also been occupied by the position of women in making arts, and in generating discourse, and in leading markets and market-generated aesthetics . One always looks at statistics on how many women run museums, and fine arts academies and institutions, in relation to the numbers of men. While the artist wondered suddenly on ‘how she sees’ and how others see, she wondered what the effect will be like representing an elderly female, aggressively looking at the viewer. It is almost a reenactment of feminist responses to the classic depictions of women in fine arts, but here carrying with it the gaze of a society, reflected and magnified by the presence of this woman. It is not clear if ‘Fawzeya’ is looking at us to say ‘Aiyb’ do not look, or if her gaze is the product of and the defence against the societal gaze in Egypt on the body of a woman. It is not clear if she comments on beauty in contemporary arts now. Perhaps that painting itself is ‘Aiyb’. It is consciously a choice to go for that which is not desired to be depicted or dealt with in the arts, since that local boom. The painting here is a risk, a painting of beauty that has been ‘Aiyb’, with its many layers.

For the artist, she qualifies this rupture as a chance to revisit old ways of seeing she once experienced, as she constructed characters, figures, and frames. ‘I will be working with faces, and not bodies’, states Shayma Aziz, as she moves with this work away from her gestural and choreographic work that strictly embodied figures in movement, and goes now towards a series of portraits that gaze back, that wonder, and problematize institutional histories and monopolies over terms and notions as seemingly simple as ‘beauty’, or as historically intricate and complex as ‘contemporaneity’. ‘Aiyb’ is not a forlorn image of a woman, it is an announcement, as if Fawzeya had turned towards you, raised her face, and looked for a moment.