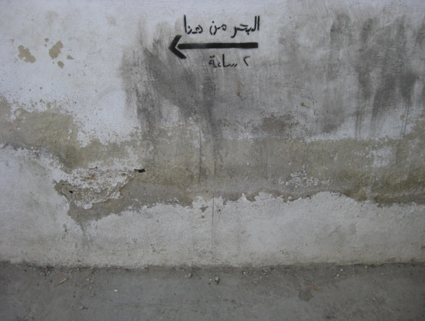 The reality of what you see is directly proportional to your imagination, for the reality I live in this moment is perceived differently by me than it’s perceived by you, transforming itself into a memory which varies depending on the messenger and the place. What are we in the end, but the result of what we heard and perceived, and what we think we had seen.

But your imagination will beautify the distant… This is how the subject started, discussing  the distances, time and its individual interpretations regarding the receiver, differences in distances and time depending on different  factors, the scene was associated in general with the attempt of drawing maps or paths, which you can cross to another place, a place often seems very far away, even to your imagination, if we look at it  in an objective manner  far from the usual romanticism, especially in cases of remembering the sea, in this case not any sea, the Sea of Palestine. We will not talk about the missed, or its beauty, but we will draw and illustrate, fix the  distances, try to look and measure if the distances are the distances, or is there other meanings for it, there comes different interpretations, jumping between the “unrealistic fact” of  barriers and differences in understanding the dimensions of space, between factors “times, space, the recipients … ” For us, the fact is that the distance between Amman and the Seaside of Palestine is two hours, but this fact is not realistic, in reality, the distance has another dimension, the distance is exaggerated by surrounding environment, because you will stand on one check point for nearly five hours, and this is what we might call illogical reality … for that we will use our imagination,  which we use in most times when it’s hard to grasp things.

The beginning was to understand the idea, of just going down the road to the sea coast of Palestine, which might sound real or logical yet difficult or impossible to implement, but that did not prevent the trials for its first stages,  which could be completed with the passage of time, so the first stage was presented by directing and pointing arrows on the walls of Amman stating that the sea is simply this way or the other, then maps were redrawn to determine different times and distances you need to get to the sea by drawing initial lines for the road… from Amman to the Dead Sea, then you will have to choose your own way, phrases stimulate wonder, about what is hiding behind it, and also raise curiosity, pointing to another sea while you are standing in front of one “which is the dead sea” raising questions around you, “what are you talking about?” or “what kind of distorted map is this?” a map that reflects somehow the distortion of time vs. distances, and also reflects the difficulty you will face, while trying to get to the destination. As a conclusion or maybe an attempt to ground it, since imagination outweigh reality most of the times with its clearance, an installation was  equipped inside a room, a visual summary of what the imagination contains inside to an abstract image, distant from reality, with mono-dimensional details, black color on the ceiling of the room two dimensional with a familiar shape – similar to what we see in the Atlas forming the Palestinian coast- which will have another element forming a third dimension, visualizing a fragile border of actual threads. Borders irreplaceable even in our imagination, but eventually we can all see things differently.

“Which sea?” an intuitive Question directed by one of the children in “Weibdeh” neighborhood in Amman— since it’s not important to inform people  of Amman that the Dead Sea is near! The answer was: “Another sea.” “And how can we go there?” Another question … the answer is simply: “This way.”

Thanks to Makan-art space in Amman.