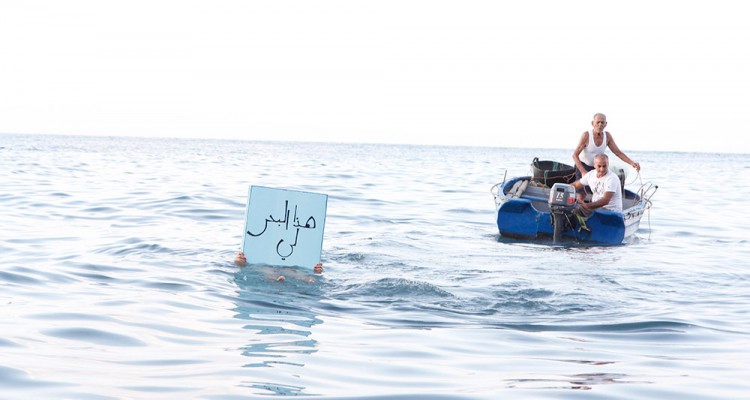 “The right to the city is far more than the individual liberty to access urban resources: it is a right to change ourselves by changing the city more after our heart’s desire… The freedom to make and remake our cities is one of the most precious yet most neglected of our human rights.”- David Harvey, 2008

Access to the sea is also more than an individual right to a natural resource. It is a collective right, the absence of which shapes our relationship to the city.

Ironically, private beach resorts, hotels, and exclusive marinas, with walls, gates and entrance fees, appear on the coasts of many of the cities and towns we inhabit. The continual growth of such projects, in addition to militarized areas and gated communities in several Arab cities indicate that the situation is not an individual phenomenon. Whether deployed by private companies, ruling classes, or state institutions, these interventions on the coast result in the re-organization of the production of the built environment.

What are the conditions that produced the privatization of our coasts? Can we contest the definition of the public space as related to the notion of ownership? What can we learn from observing alternative communal practices in open spaces in our cities? And how can we reclaim our right to access these spaces?

In this edition of the ArteZine, we in Dictaphone Group collected contributions that tackle our understanding of public space from the perspective of access to the sea. We asked the contribution of activists, artists and researchers from Lebanon, Jordan, Bahrain, Saudi Arabia, Syria and Palestine, with an aim to critically and comparatively open a debate about access to the sea as a social practice and as a right to “make and remake our cities” (Harvey, 2008). The questions we collectively raise will tackle issues of neo-liberal development policies, conceptions of public space, and alternative social practices as resistance. The contributions will be in the form of urban research articles, or documentations of artwork (interventions such as graffiti, installation, etc), or campaigns.

The first essay, “This Sea Is Mine” by Dictaphone Group, discusses the understanding of public space as use and performance as protest. The essay describes a live art performance based on urban research in which the audience is invited on a boat trip to discover the conditions that enabled the privatization of the coast of Beirut.

Moving from Beirut, the next contribution is rooted in Bahrain and touches upon crucial issues in the privatization of the coast of the entire island. It points to an interesting collusion between ‘government’ and ‘regime.’ The article is based on a film project by Bahraini activists who start their text by posing an important question: “Who does Bahrain belong to and who has the right to bestow it away?”

The third contribution explores the sea front area in Latakia in Syria, near the Palestinian refugee camp, el-Raml. The author, Ghiath Al Jebawi, tells the story of the sea-side stretch which used to be a camp site for Tala’e el-Ba’ath, a site that nevertheless maintained its public character due to the informality of its use. This informal public space became a militarized one after the start of the Syrian revolution, particularly when the regime attacked el-Raml camp with warships.

The contribution from Saudi Arabia by Rana Jarbou describes the use of graffiti in campaigns against the closure of sea lands in the North Obhur coast. It is a lyrical photo-essay that points to the importance of public interventions in raising awareness.

The other contribution from Lebanon by Mashaa Campaign also articulates the significance of the production of visuals in the process of land reclamation in Lebanon, particularly the annexation of public land in the area north of downtown Beirut.

Haneen Naamnih’s contribution from Palestine takes us on a different journey. She starts her article saying: “In Haifa, the sea brought goods, but also the enemy.” She recounts stories about Palestinians’ strong ties to the sea; a relationship that was torn due to colonization.

The last contribution is a piece about Nuha Innab’s installation about measuring the distances from Amman to the sea in Palestine. While she was working on the project, she was faced with an intuitive question by one of the children in Weibdeh neighborhood of Amman. He asked: “Which sea?” She answered: “Another sea.” Another child then asked “and how can we go there?”

Nuha pointed “from this way!”

From this artwork, we were inspired to call this edition “The Sea Is This Way,” in a provocative attempt to simply head toward the sea.