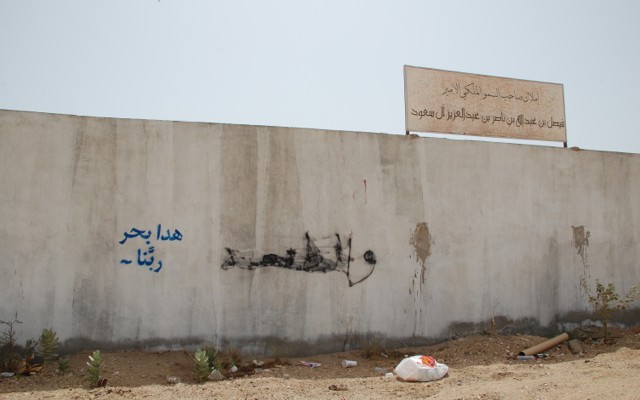 “Saudi Arabia is one of very few countries in the world where the effect of the global economic crisis has been relatively minor; thus highlighting the continued Saudi governmental support for the domestic tourism market which is both robust and unwavering,” said Prince Abdullah Bin Saud Bin Mohammed Al-Saud, Chairman of Al Ahlam Marina Tourism Groups, the management company of Al Furusya Marine & Yacht Club.[i]

According to studies conducted in 2007 by the Saudi Commission for Tourism & Antiquities, 94 per cent of the land on the shores of the sea from the borders of Jordan to Yemen are either private property, governmental or wildlife sanctuaries.[ii]
Jeddah’s Red Sea North Obhur is advertised in the Saudi Tourism website as having “a large number of fantastic sites which are well-supplied with hotels and resorts. Plenty of non-diving activities are also available, such as golf and jet skiing.” Indeed there’s plenty of room on the North Obhur coast for houses with swimming pool for rent, resorts, 5-star properties and that sort. Some evidence and publications indicate the presence of 50 beach resorts in the North Obhur area.

North Obhur is also a beach front for palaces including villas, swimming pools, yacht berths, helipads, garages, and exclusive islands. Ranging from 300 to 1100 acres, these beach palaces cost a minimum $250 million up to $560 according to virtual globetrotting. They are however unavailable for viewing through Google earth.[iii]

The significance of having these resorts and private properties off-limits or blurred on Google Earth or Google Maps, whether due to governmental restriction or personal privacy lawsuits, is that the information they convey is potentially problematic in the broader discourse of Jeddah’s urban landscape. This landscape is also the medium through which social, cultural, environmental and economic discourses and ideologies become visible.

Jeddah, the global city, main trade point and first stop for pilgrims making their hajj or umrah trip to the holy cities of Mecca and Medina, is facing major urban and housing problems. While it hosts boat shows and conferences, festivities, and jet sea competitions, it is also failing to deliver urban infrastructure services and meet housing demand among low and mid-income households. The Saudi government has recently frozen land grants notwithstanding a large backlog including as many as 200,000 applications in Jeddah.[iv] Jeddah’s social fabric can be revealed through scrutiny of the interaction between its spatial configuration and socioeconomic dynamics, which is far from egalitarian. Al-Ruwais Regenration project, part of a larger a redevelopment of slums project by Jeddah Development and Urban Regeneration Company (JDURC), is an example of the private sector displacement of local communities in Jeddah.

Another case to look at is that of Allulua Village in North Obhur. Rising real estate prices under the pretext of not owning land has forced tenants out of their homes, after paying more than 10 years of continuous premiums. Al-Masarat for Construction Co. Ltd set up an auction sale for some of Allulua Village’s properties without informing the tenants. Police prevented journalists as well as the residents who were on the top of the list of those banned from entry to the auction, asserting the invalidity of the property sales.[v]

The issues of reurbanization and housing in Jeddah are evidently shaping the city’s landscape, while concealing the conflicts of culture, identity, and social relations. According the Jeddah Municipality, the total length of the coastline within the Jeddah Governorate is 655 kms, of which approximately 186 kms is developed.[vi] A combined length not exceeding 21km of the developed area is accessible to the public, albeit dispersed and fragmented.

“This lack of public access is due to the fact that a high proportion of land adjoining the waterfront is privately owned. Most private developments are not set back or have not provided public access to the beaches adjoining them. Other barriers to public access and enjoyment are dispersed access points, a lack of parking facilities, the overuse of certain areas, the severance caused by inadequate location of transport infrastructure, and lack of public transport services.” (Waterfront Management, pg. 8).

On the wall of private properties stretching along North Obhur’s seaside, the recurring phrase “this is our god’s sea” is graffitied highlighting the inaccessibility to the sea. “They say that Jeddah is the bride of the sea… where’s the sea?” Using a blend of cynical Jeddawi humor and an experimental quest for rectification, Maddat Jeddah is a short-lived initiative to highlight what they defined as a few of the city’s chronic problems.

Graffiti stenciled phrases was one means through which they addressed Jeddah’s poor road infrastructure and pollution of the environment. Maddat Jeddah translates into the becoming of a desolate abandoned settlement, reference to the religious foretelling of the earth. For unknown reasons this initiative was discontinued.

“In North Obhur, we have no channel to get to the beach,” tweeted Saudi blogger and political commentator Fouad al-Farhan. The statement sounds strange when North Obhur is widely known as the beach; in essence a beach to which we have no access. Jeddah’s (luxurious) Corniche is no alternative, which has major shopping malls in proximity on the main busy road, not to mention the coffee shops, distracting roundabout sculptures, and anything but what some of us seek from a walk by the seashore.