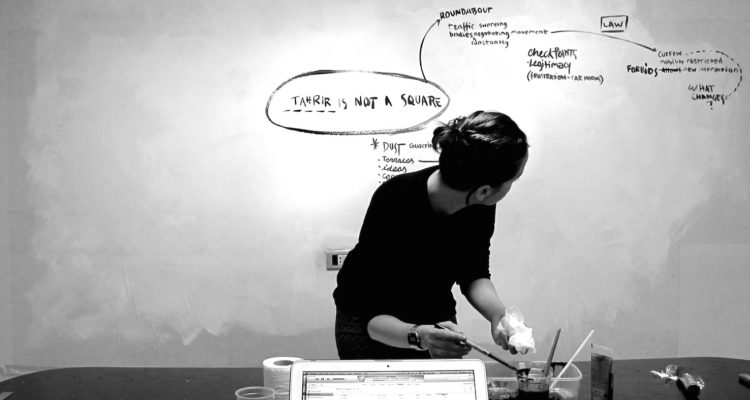 Maha: ‘Propaganda’ is another word. I struggle with that in culture sometimes. Whom am I to label when something is propaganda or not. Sometimes I used it more specifically in regards to anything state-produced, or the cultural protest or whatever it may be. But I get a bit confused of when to use it or not. I kind of subjectively use it.

Adelita: That’s a good point. I guess it is again who is speaking in some way. Where would you put it?

Antonia: Propaganda…It would be interesting to look at the definition. It is basically the spreading of ideas and information with the aim to induce specific attitudes and actions, so basically to manipulate.

Naira: I never use the word propaganda ever. It depends on how you understand knowledge, so if you take a definition like, I know it is not the proper one, but…

Habiba: Yea [reading]: “Information for biased or misleading nature used to promote or publicize a particular political cause or point of view”

Naira: I think that many things fit under propaganda, so the type of word that I would use would be the state rhetoric or discourse because if I am trying to promote something and influence people’s way of thinking, to what extent is that or is it not propaganda?

Adelita: Everything is ideologically grounded in  some…

Antonia:  But what if you are consciously and actually giving wrong information? If I think of Berlusconi in Italy, his propaganda is basically programmatically changing information to reach a certain scope. But I guess that’s different from rhetoric.

Naira: If something is misleading, I would describe it as misleading. I just feel the word propaganda implies a view of knowledge that is pure, which I don’t think is true.

Lina: I associate propaganda with industry in many ways. It is not a spontaneous thing. Propaganda is something you need to engineer and that’s why it’s normal to associate it with the state because you need an institution that is as large as the state to master an engineer an industry like propaganda.