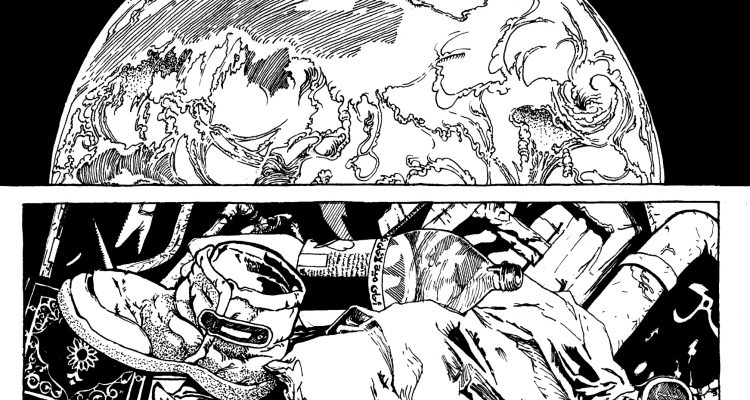 ArteEast is pleased to present an interview with artist Ganzeer as part of our Artist Spotlight.

Ganzeer operates seamlessly between art, design, and storytelling, creating what he has coined Concept Pop. With over 40 exhibitions to his name, Ganzeer’s work has been seen in a wide variety of art galleries, impromptu spaces, alleyways, publications, and major museums around the world such as The Brooklyn Museum in New York, The Palace of the Arts in Cairo, Greek State Museum in Thessaloniki, the V&A in London, and the Edith Russ Haus in Oldenburg. He has been an artist-in-residence in Germany, Poland, Jordan, Holland, and Finland, and has lived extensively in Cairo, New York, Los Angeles, Denver, and finally Houston–where he is now based. 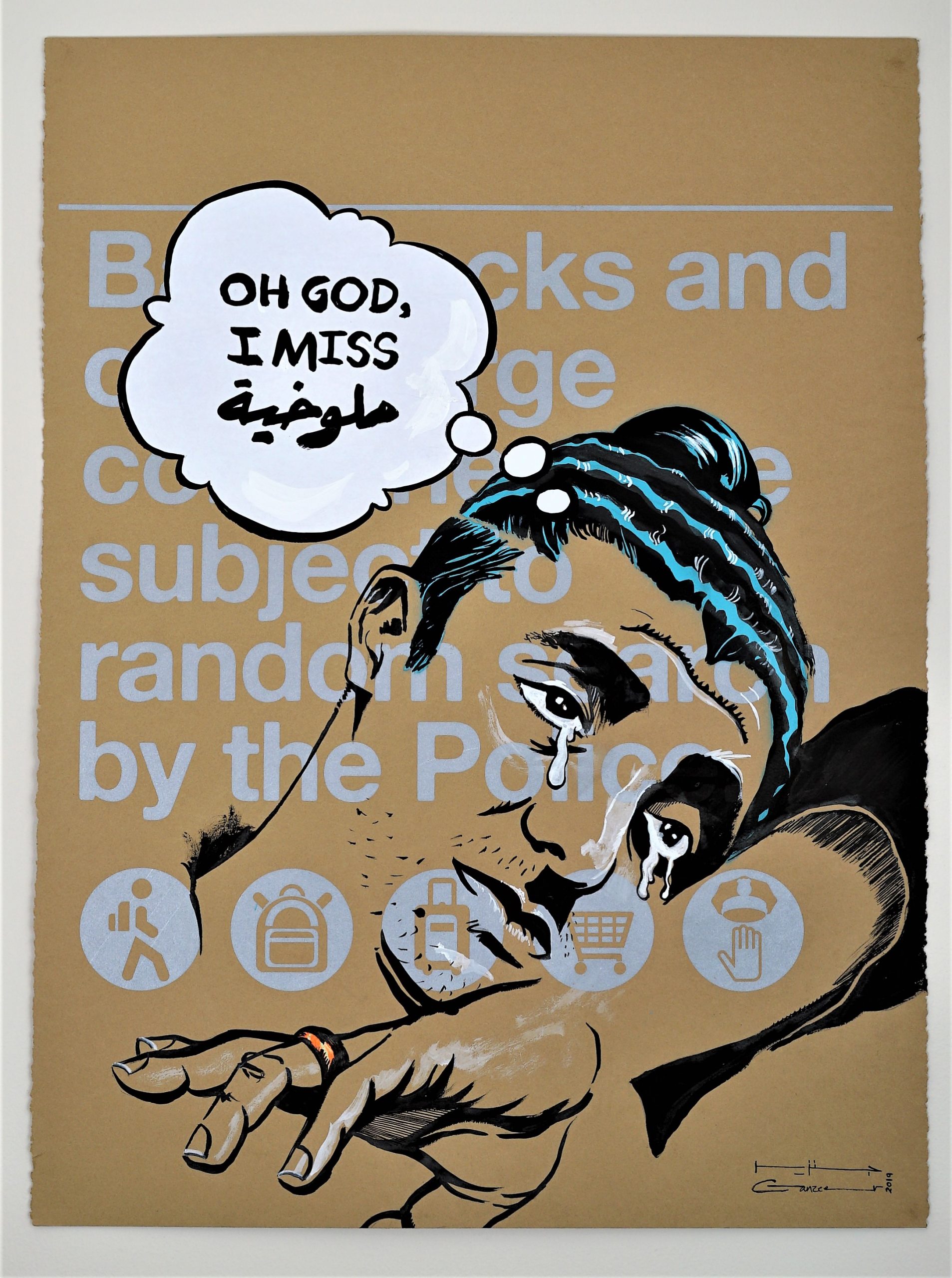 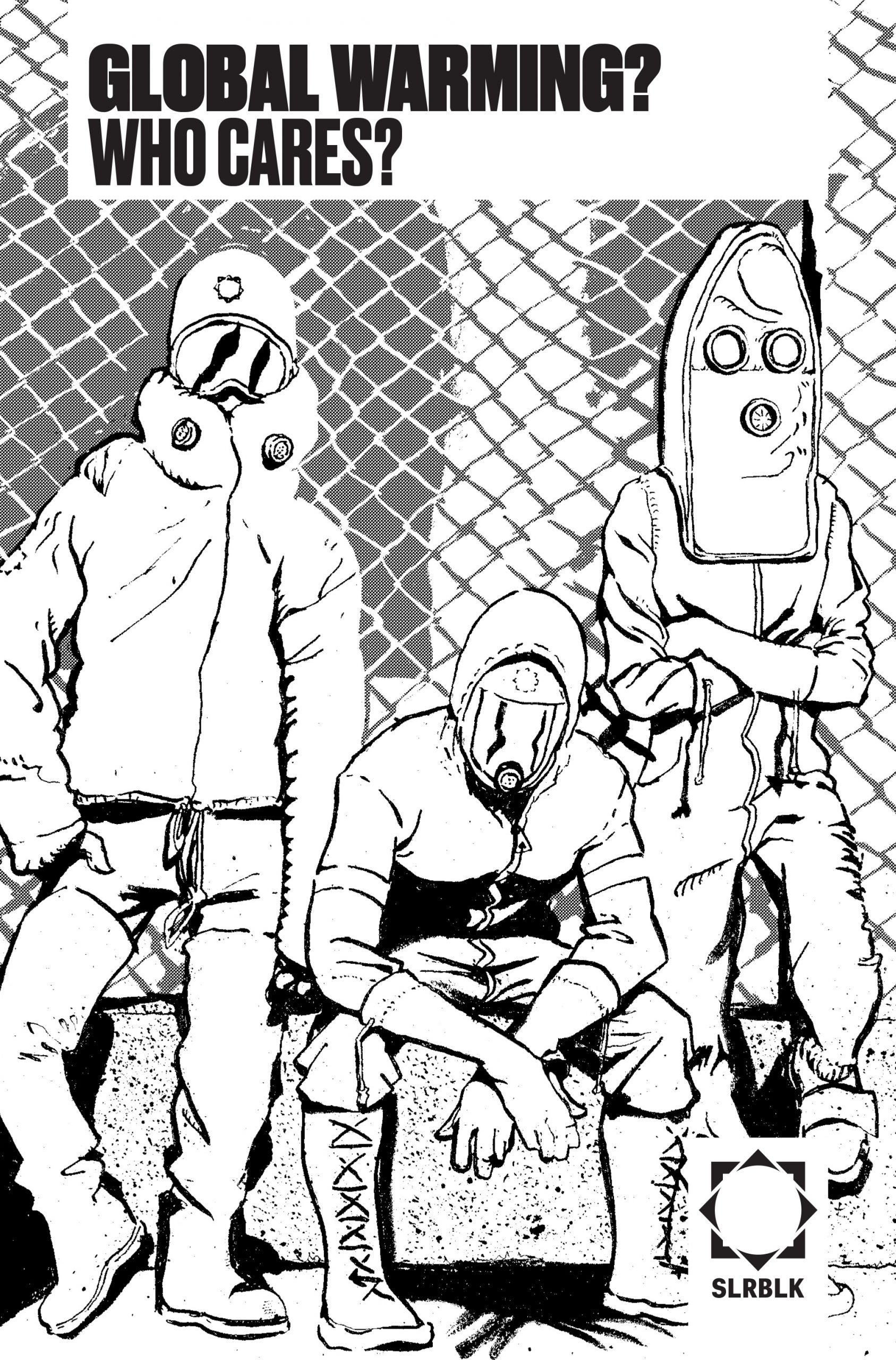 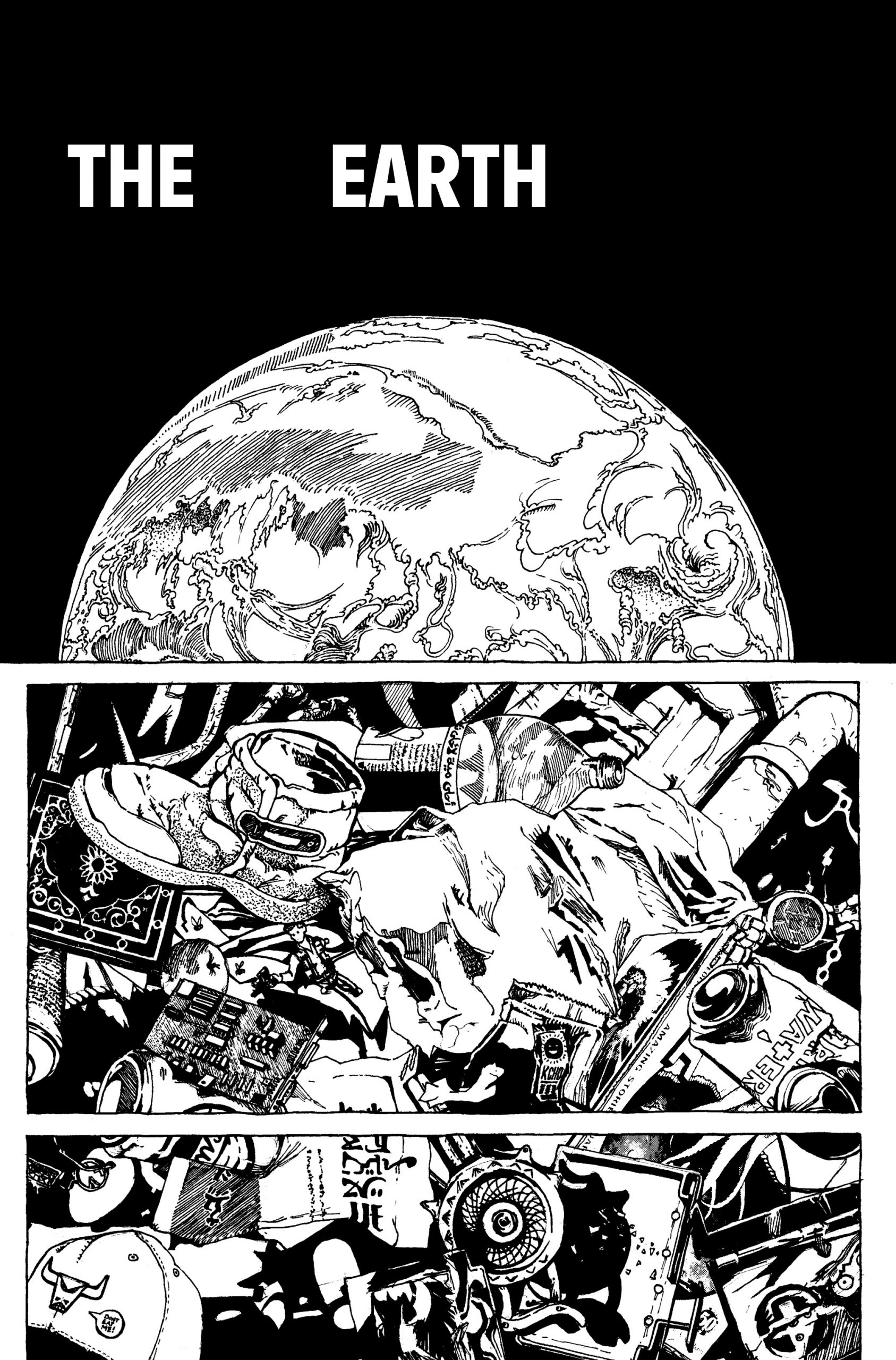 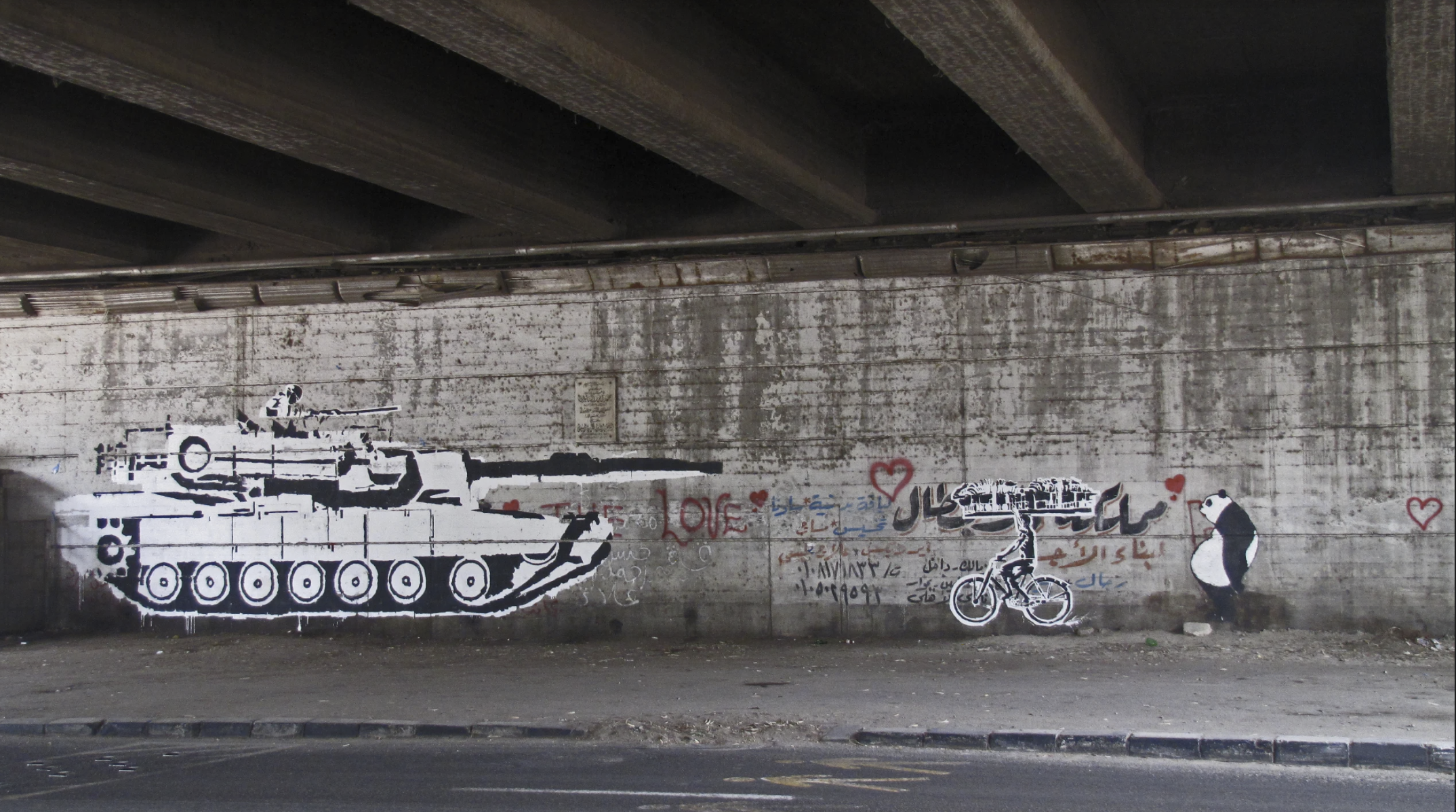 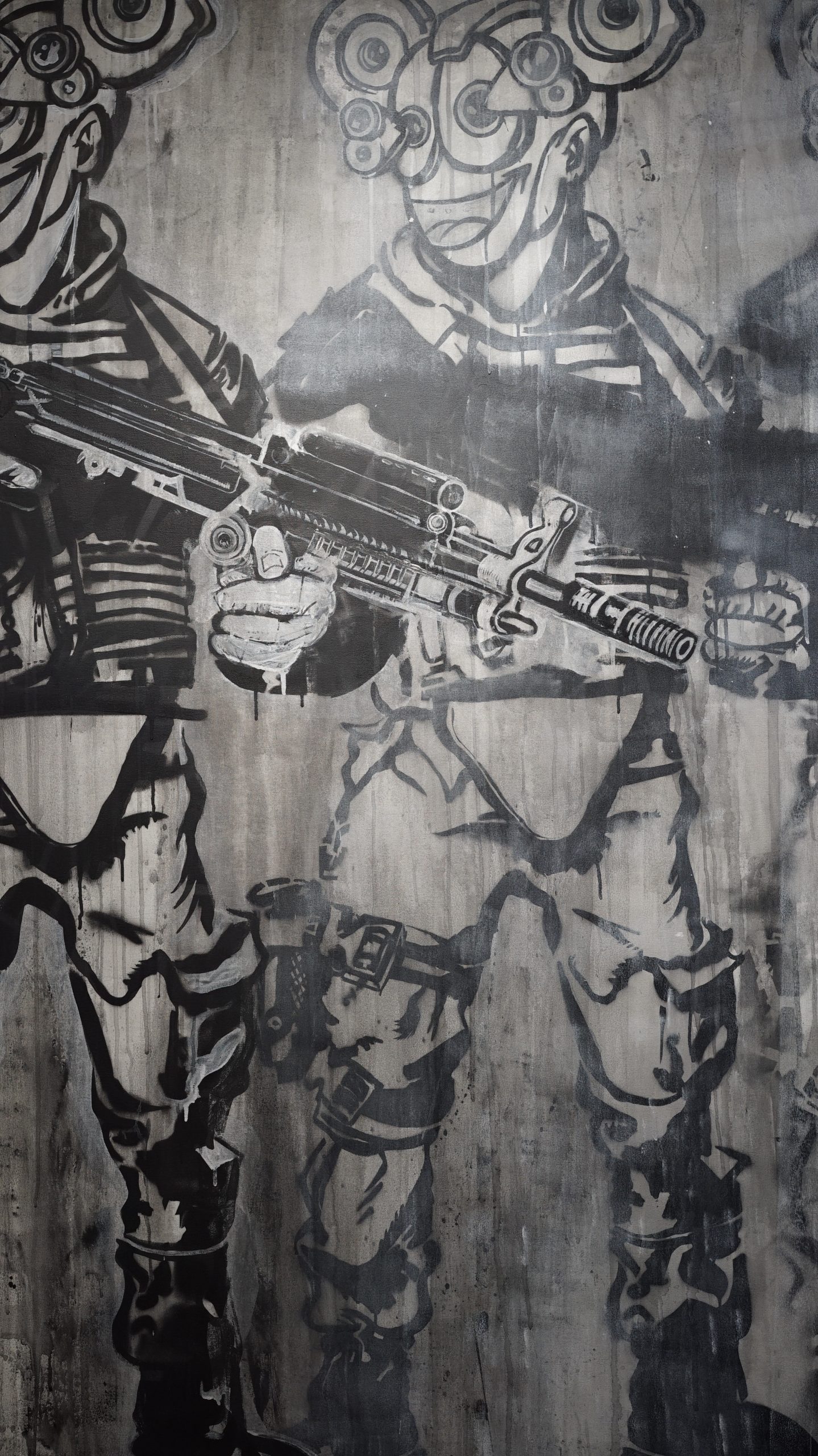 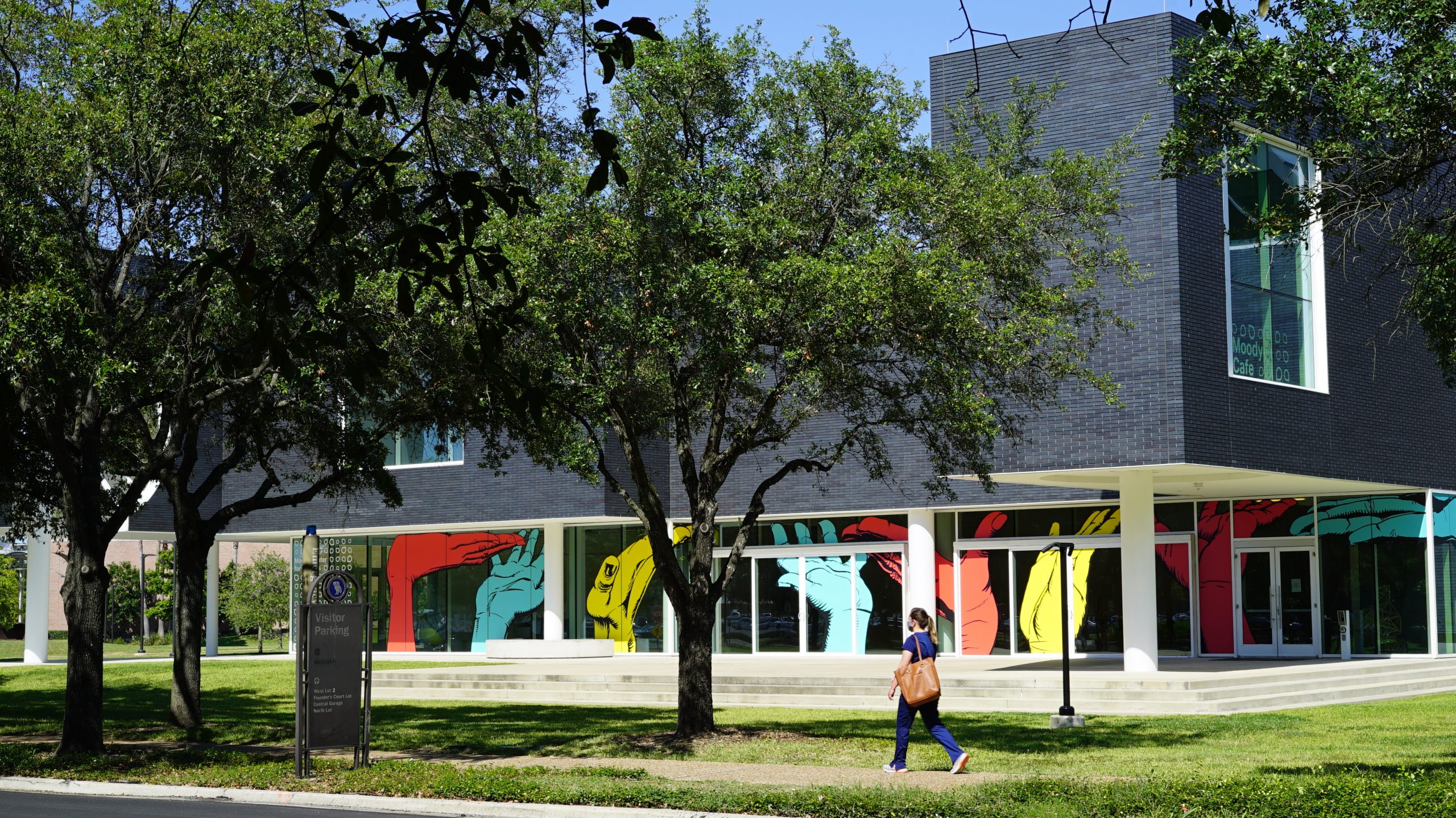 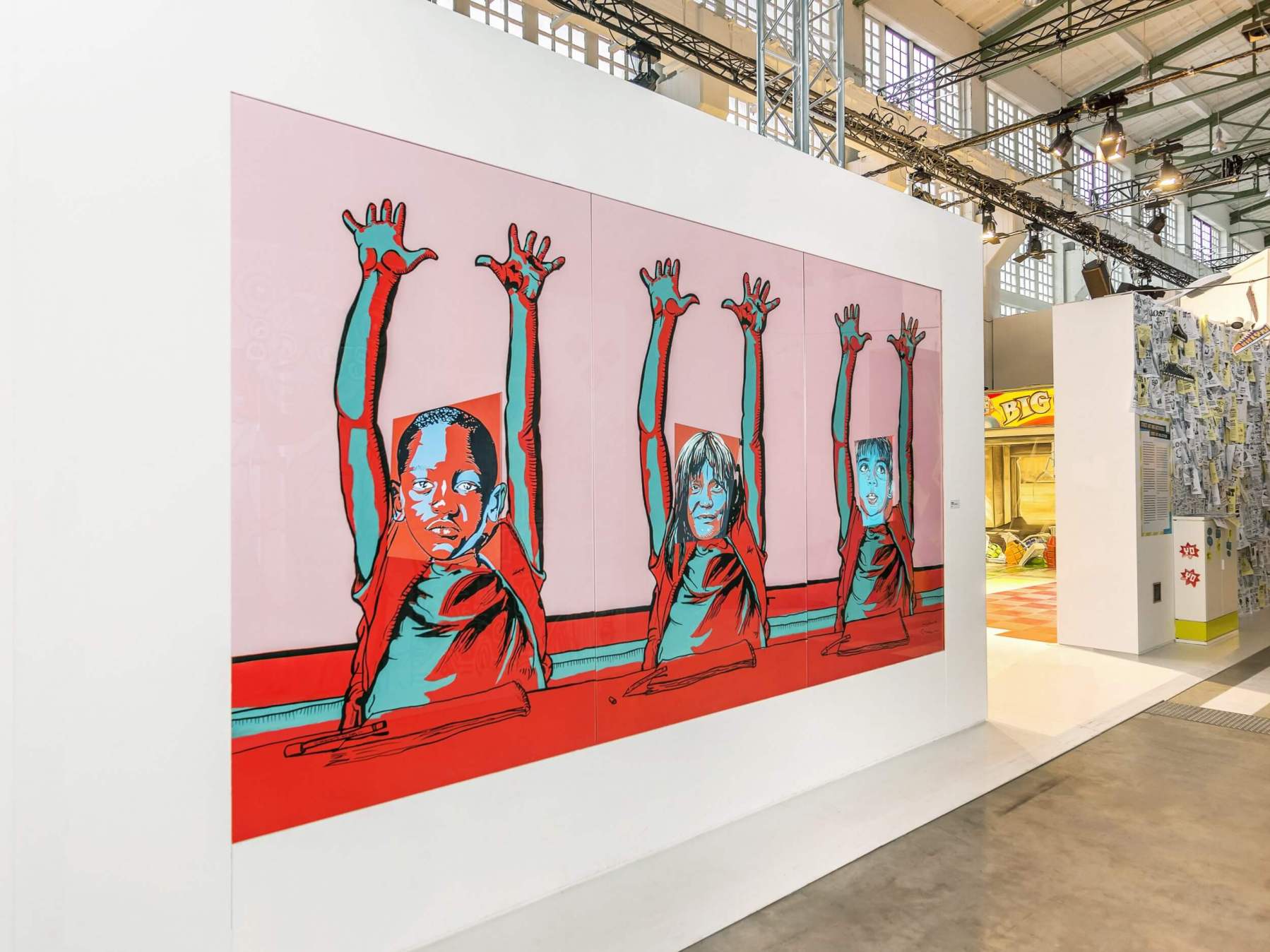 Ganzeer, Hands Up – Vol. 2, 2016. Acrylic on wood with animation on screen (photo by Rainer Christian Kurzeder). 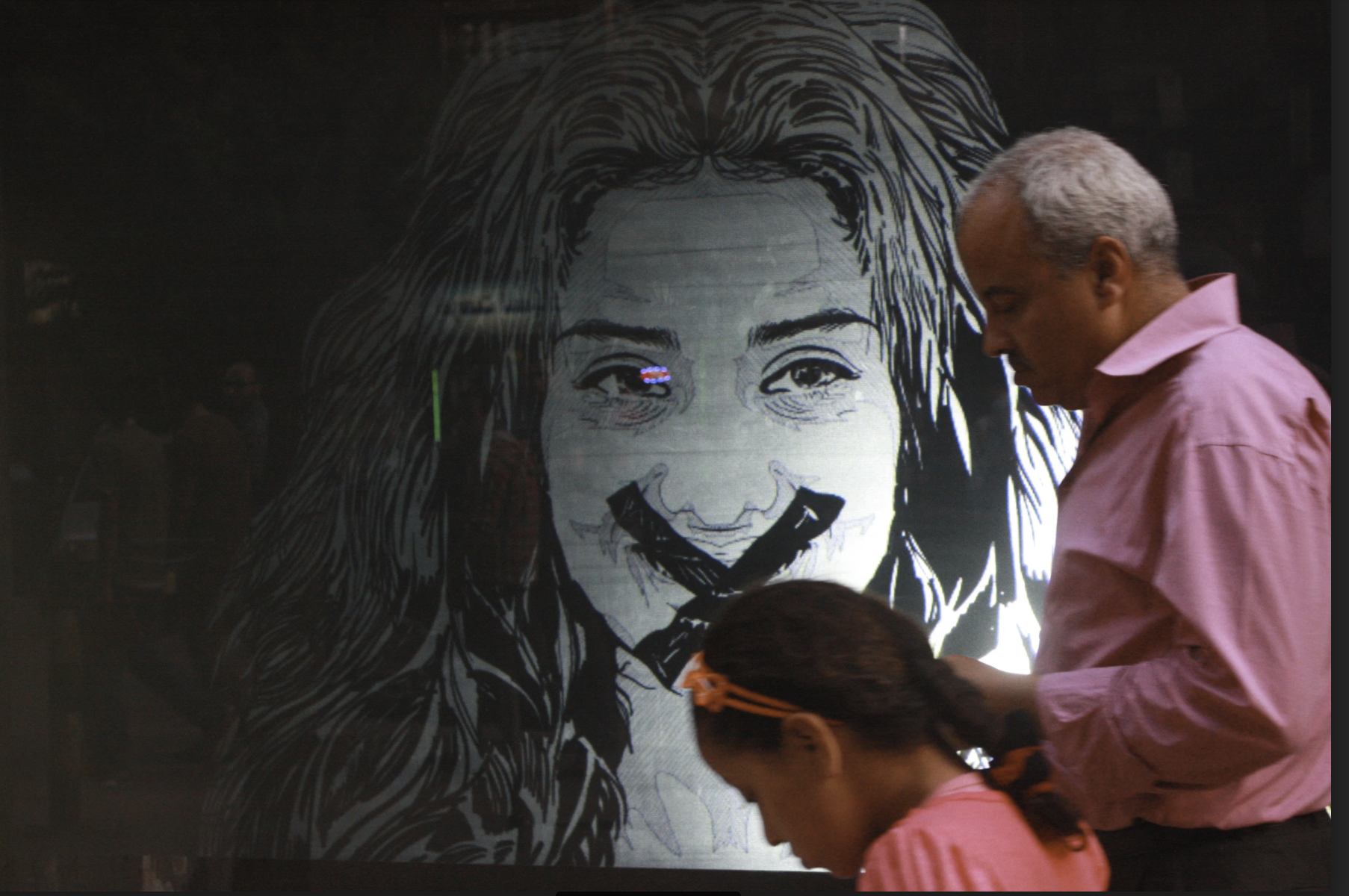 Ganzeer, Face the Vitrine, 2013. Interactive projection on glass – in collaboration with Yasmin Elayat 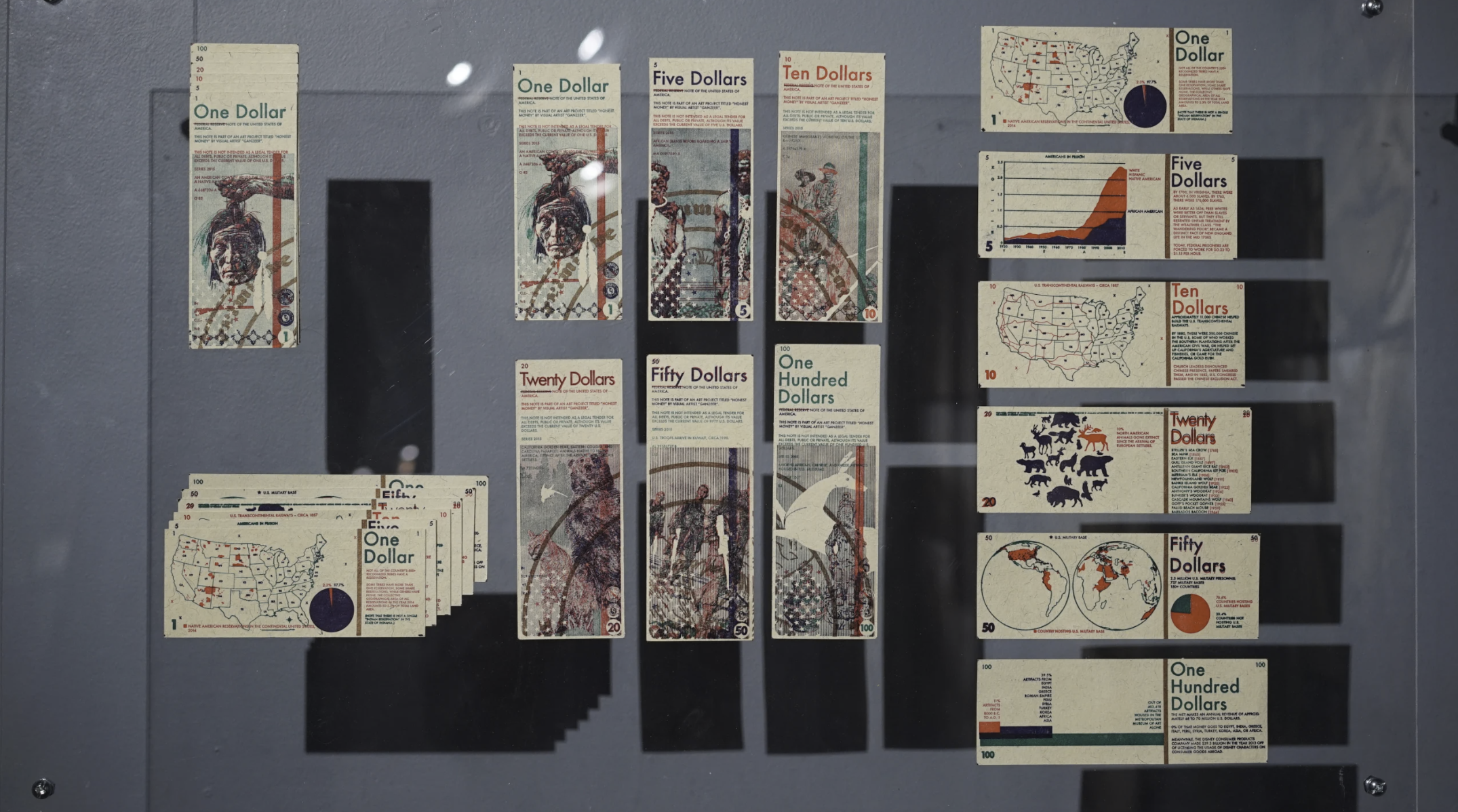 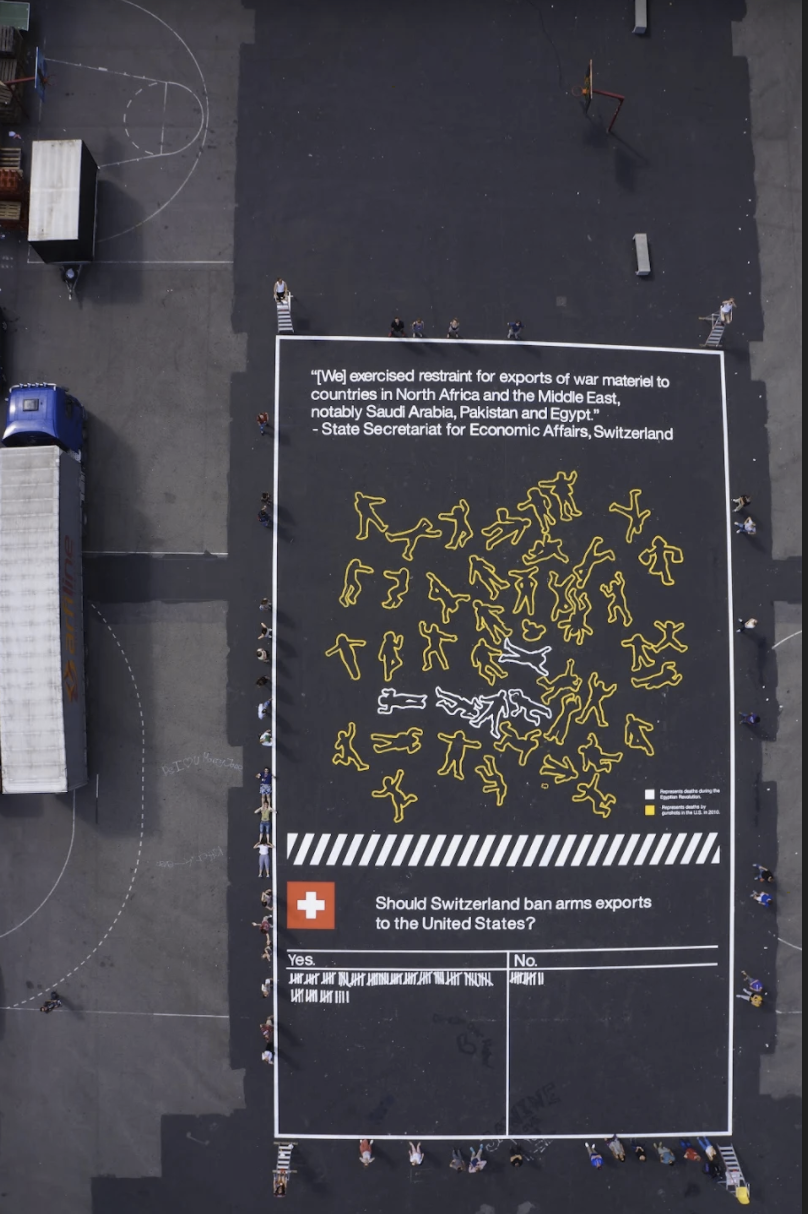 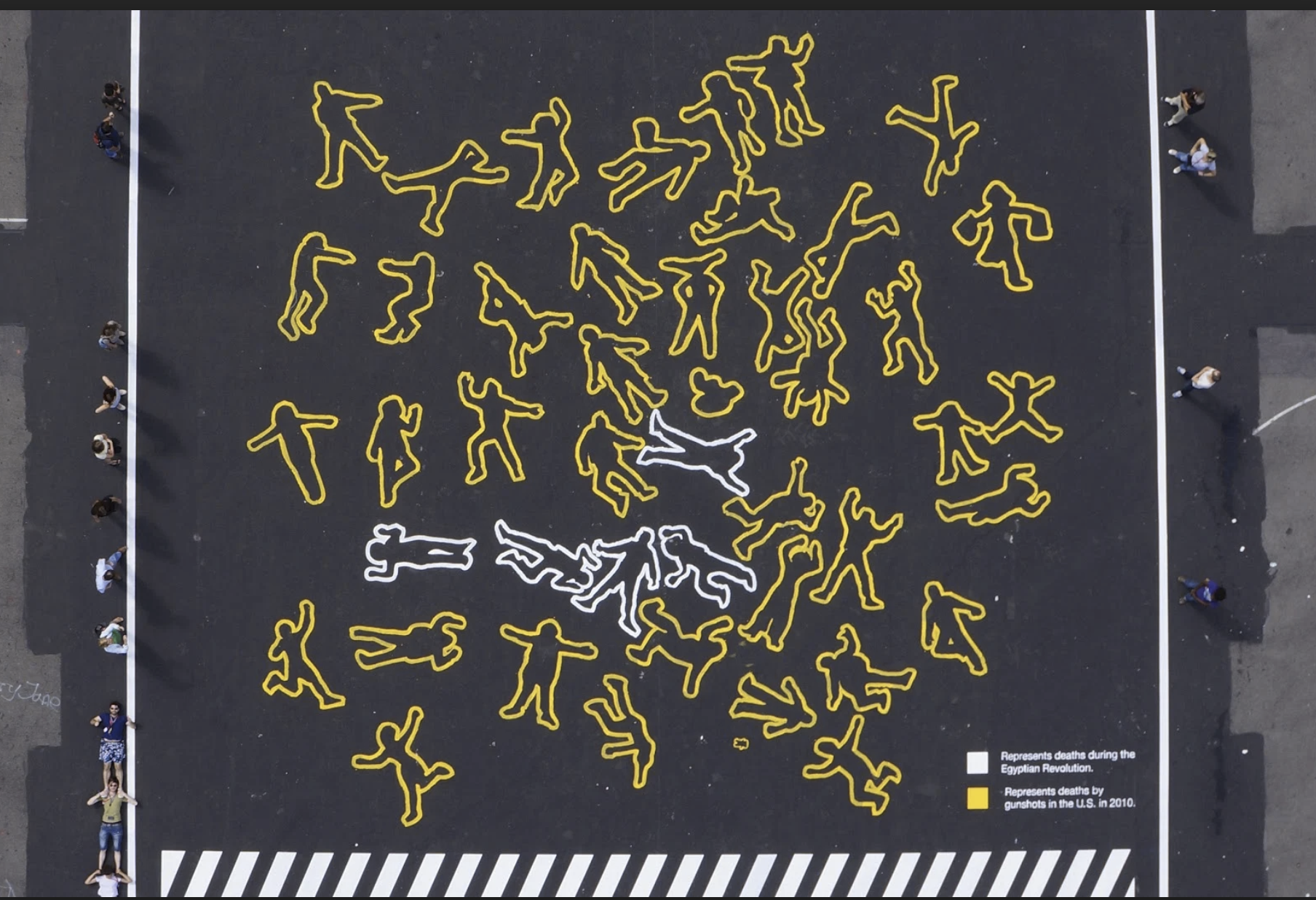 ArteEast: You are known for being an influential artist during the Egyptian revolution, however you’ve done so many other things, how do you feel about being categorized in this way?

Ganzeer: Generally speaking, I’m not too keen on being categorized in any incredibly narrowed down way. Nor do I care much for categorizing anyone else as such. It strikes me as a very post-industrial way of thinking about people; machine-like and almost singular in intent and function. Having said that, there are far worse things to be categorized as, so it doesn’t really bother me much nor do I give it much thought to be honest. I just work on the stuff I feel like working on, regardless of expectations or lack thereof.

ArteEast: Can you tell us about the comic books you’ve been writing? How has the crowd funding gone for that?

Ganzeer: THE SOLAR GRID is a graphic novel I’m writing and drawing in 9 chapters, each varying in scope and size. It tells of an Earth reeling from a cataclysmic flood, causing the fortunate enough to relocate to Mars while everyone else is left behind. Night is eventually eliminated from Earth, along with its water supply, as a result of a mass network of satellites called The Solar Grid which keeps the planet basked in eternal daylight. This, to provide energy to solar-powered factories on Earth, that run ceaselessly in an effort to provide goods intended for export to Mars, which in turn sends the waste back to Earth. Two orphans on Earth, Mehret and Kameen (who rummage through the waste to salvage things they may use to live off) come upon an item that gets them involved in a plot to destroy The Solar Grid.

That’s the basic gist of the thing, essentially a vehicle to explore the intersection of race, gender, industrialism, consumerism, and environmental destruction.  Crowdfunding went well! Slightly over target. And the [still in progress] book has gained interest from new readers as well as a number of publishers since.

ArteEast: What interested you in creating the poster and lobby art for the musical  We Live in Cairo, written by two American brothers who had no pre-2011 experience of Egypt? The musical is described as dramatizing Egypt’s “Arab Spring” uprising, from its prehistory in the organizing of the early 2000s, through the 18 days of protest in 2011 that led to President Hosni Mubarak’s ouster.

Ganzeer: I chatted with the Lazours who wrote the play, as well as with Taibe Magar who was assigned to direct, initially for their “research purposes.” I later had the chance to listen to a rehearsal version of some of the songs, and all in all, I was both impressed and taken by the entire thing. The team’s ability to produce a Broadway-style musical that simultaneously captures many of the nuances of Egyptian society is beyond impressive. I should point out though, that the dramatization doesn’t end with Mubarak’s ouster, but in fact extends well until Sisi’s coup d’etat.

ArteEast: The acknowledgment of the role that street art and graffiti artists played in the revolution was highlighted in the play. It’s been almost 10 years since Jan 25, 2011. Did the protest art associated with the Black Lives Matter movement remind you of that time in any way?

Ganzeer: Less so the street-art and more so the movement itself. The parallels are numerous for sure. On the street-art front though, I’d argue that much of the street-art that came out of Egypt during that time was just incredibly unique, often blending cynical humor, pointed criticism, and numerous cultural references. Not sure I’ve seen much like it before or since, within the Arab-speaking world or out.

ArteEast: How has moving to the United States changed your outlook on art? Has it affected or changed the way you approach artmaking and/or look at art? Has anything about your practice changed since you have moved to the U.S.?

Ganzeer: I’m not sure my own outlook has changed a whole lot, but I’ve definitely had more of an opportunity to see and be a part of “art in America” so to speak, which–much like most things in America–is very much commodified, and as such has been reduced to a largely detoothed practice of purely aesthetic dabbling. While aesthetics are a wonderful and integral component of art-making, it is but one component that is hardly enough to make a truly compelling work of art as far as I am concerned. It’s even worse if you as an artist are viewed by curators and art dealers as a specific “other,” and as such are almost explicitly expected to solely churn out aesthetic reflections of your otherness (ie. If you are a queer Black person, then your art–even if void of anything resembling opinion–is expected to aesthetically embody queer Blackness. If, say, you are an exotic-looking “Middle Easterner,” then the expectation is that the features of your subjects are perhaps as exotic-looking as yourself or maybe your work features the exotic-looking script of Arabic–or Farsi–or better yet: a combination of exotic faces and script!). Thankfully, none of that has affected the way I work at all. Neither playing to racialized narratives in America, nor creating slight variations of the exact same “work of art” are of interest to me, regardless of what a dealer’s offer may entail.

My practice has remained the same to the degree that I’m always interested in exploring new stuff. Which means the outcome is always different, be it in terms of aesthetic choices, medium, or subject matter.

ArteEast: How, if at all, have you been making use of this time of self-isolation? Have there been any creative gains or challenges?

Ganzeer: Honestly, not a lot has changed for me. The work I do has always required extensive self-isolation anyway in order to get it done. The only difference is travel cancelations pertaining to certain projects, but otherwise I’ve been indoors toiling away at my graphic novel just as I’ve mostly been for the past… 5 years now. A few other minor projects have come my way since the pandemic hit (such as a window installation for the Moody Center for the Arts in Houston, an illustration for a publication out of France, a handful of commissions), but mostly it’s the graphic novel.

ArteEast: What have you given thought to doing or creating once the global pandemic subsides?

Ganzeer: To be totally honest, my backlog of projects-I’d-like-to-do already exceeds the time available in any one’s lifetime to actually do them. These days I daydream of creating a quarterly publication as a vehicle for my various explorations, but realistically? I’ll probably still be working on THE SOLAR GRID. Once it’s finished though, I’d like to explore some of the book’s themes through a series of paintings and installations. First things first though.