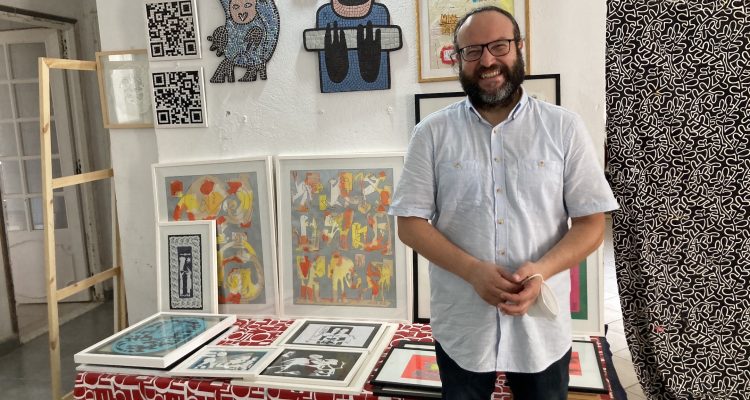 Mohamed Ben Soltane in his studio in Tunisia, Summer 2021

ArteEast is pleased to present an interview with artist Mohamed Ben Soltane as part of our Artist Spotlight series.

In 2015, Ben Soltane was selected by the magazine Culture Trip as one of the 10 most interesting artists in North Africa.

Mohamed Ben Soltane has participated in several national and international exhibitions including the solo show TNS <BCN 03 / Mohamed Ben Soltane, at the Civic Center Fort Pienç in Barcelona, ​​January 2011, A Rosy Future in Berlin and Stuttgart in 2012, the DAAD Gallery, Berlin in 2013, SWAB, contemporary art fair in Barcelona in 2016, Art Vancouver, 2019, and Occupational Hazards, at Apexart, New York, in 2019.

He is represented by A/Gorgi gallery and Yosr Ben Ammar Gallery. 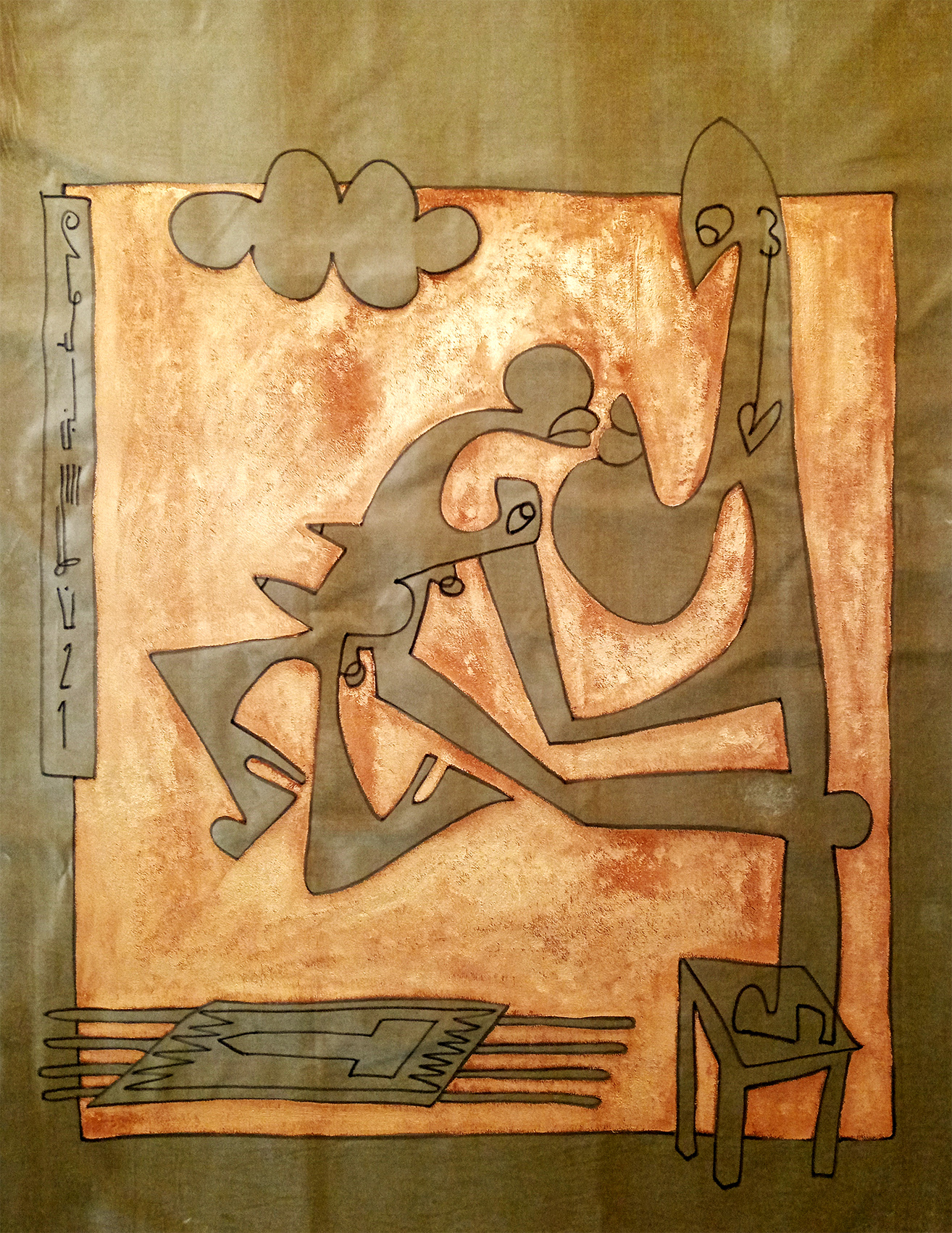 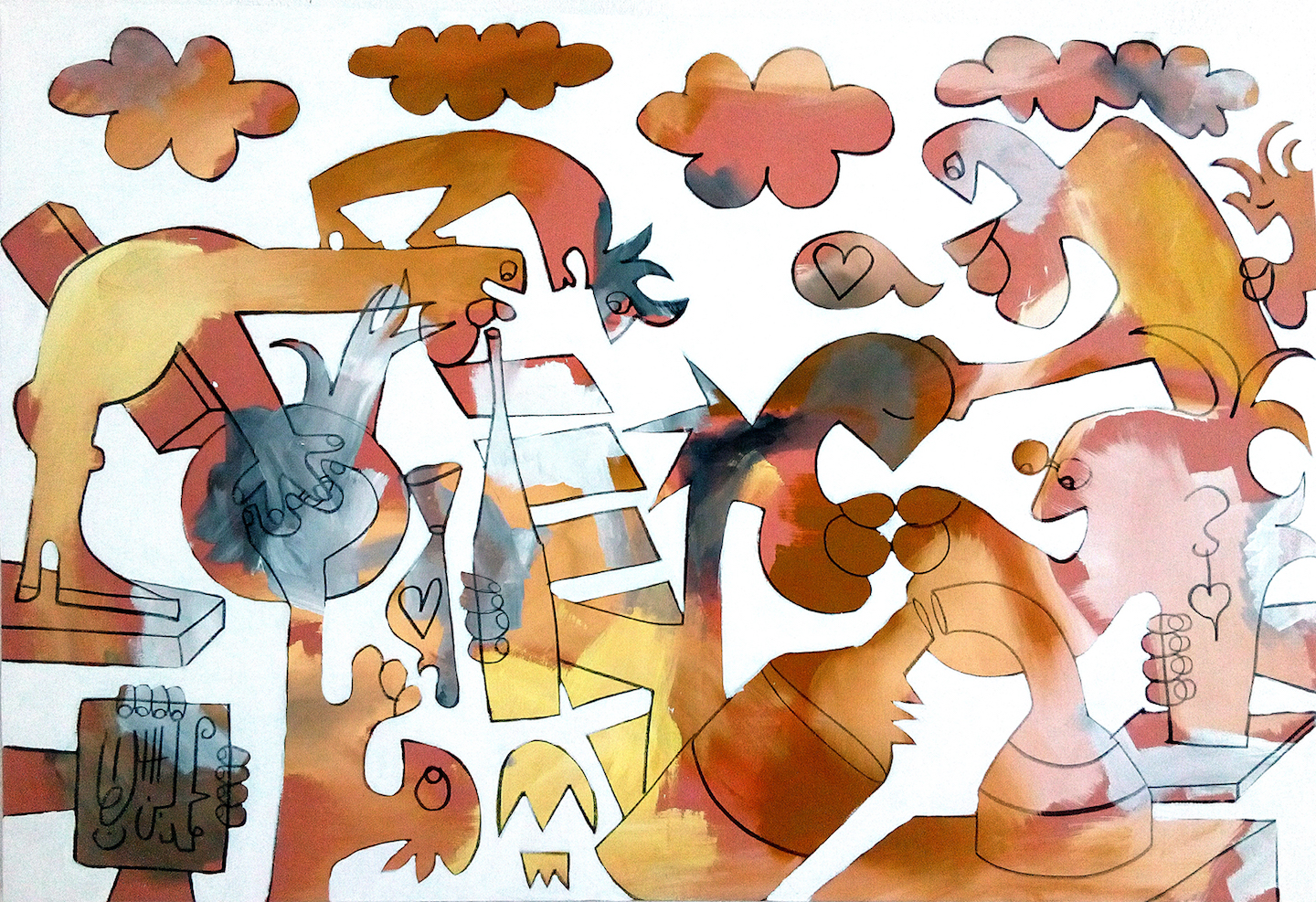 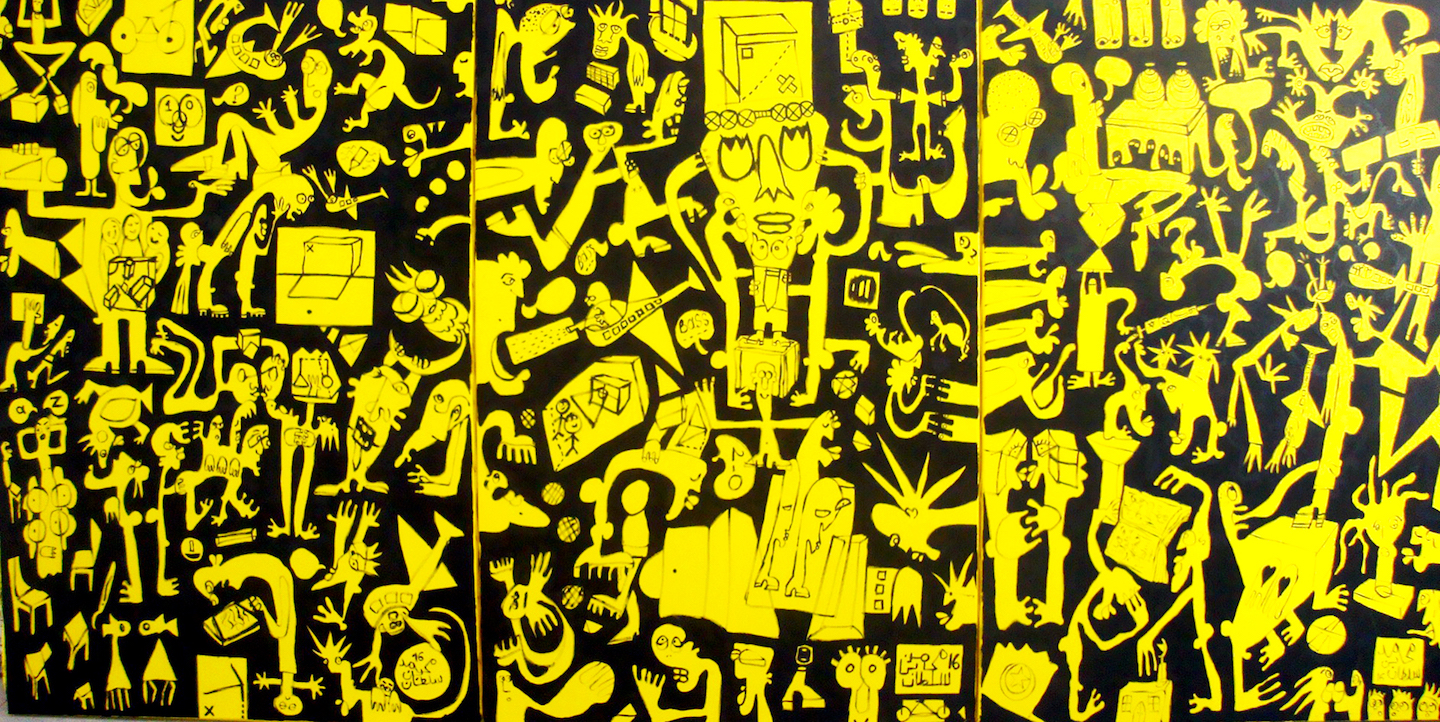 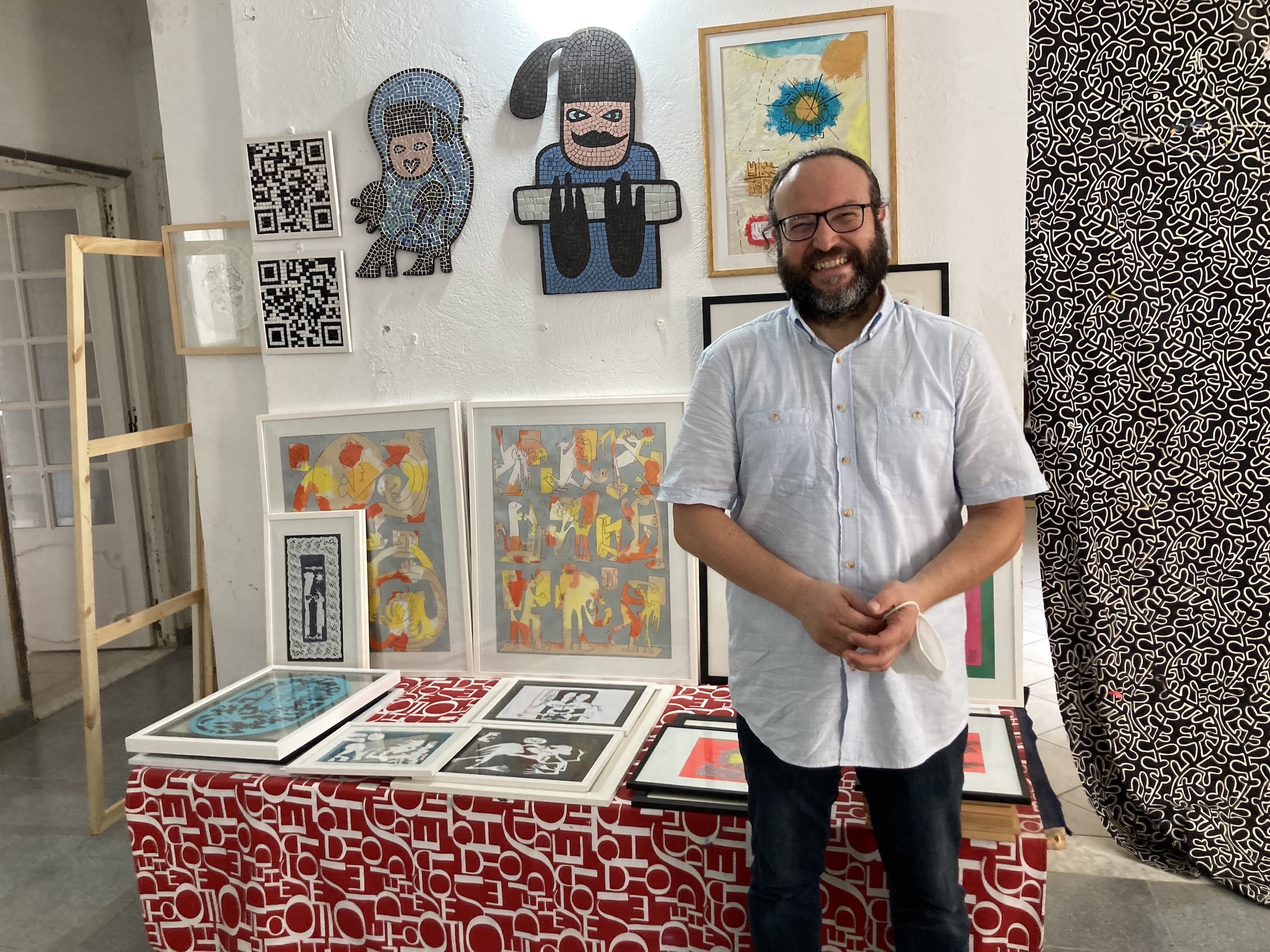 Mohamed Ben Soltane in his studio in Tunisia, Summer 2021 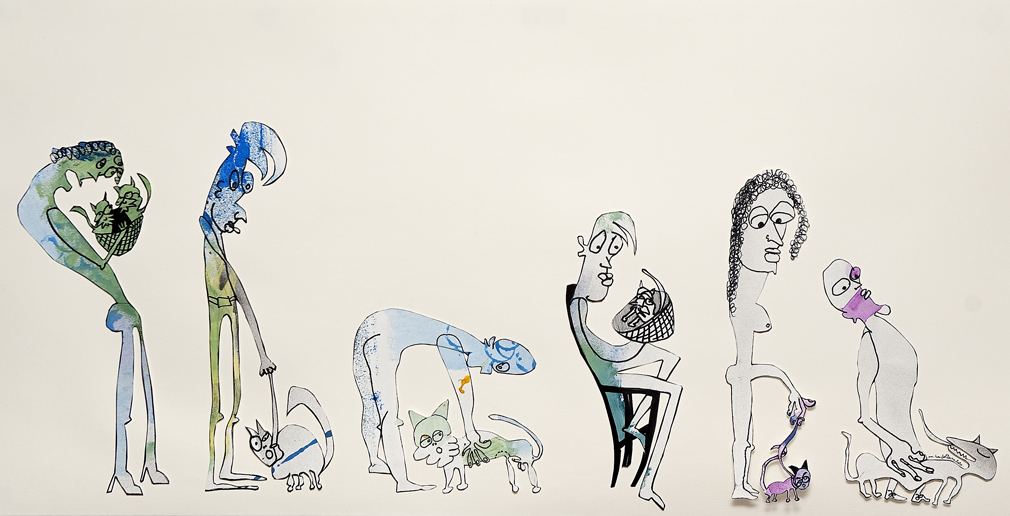 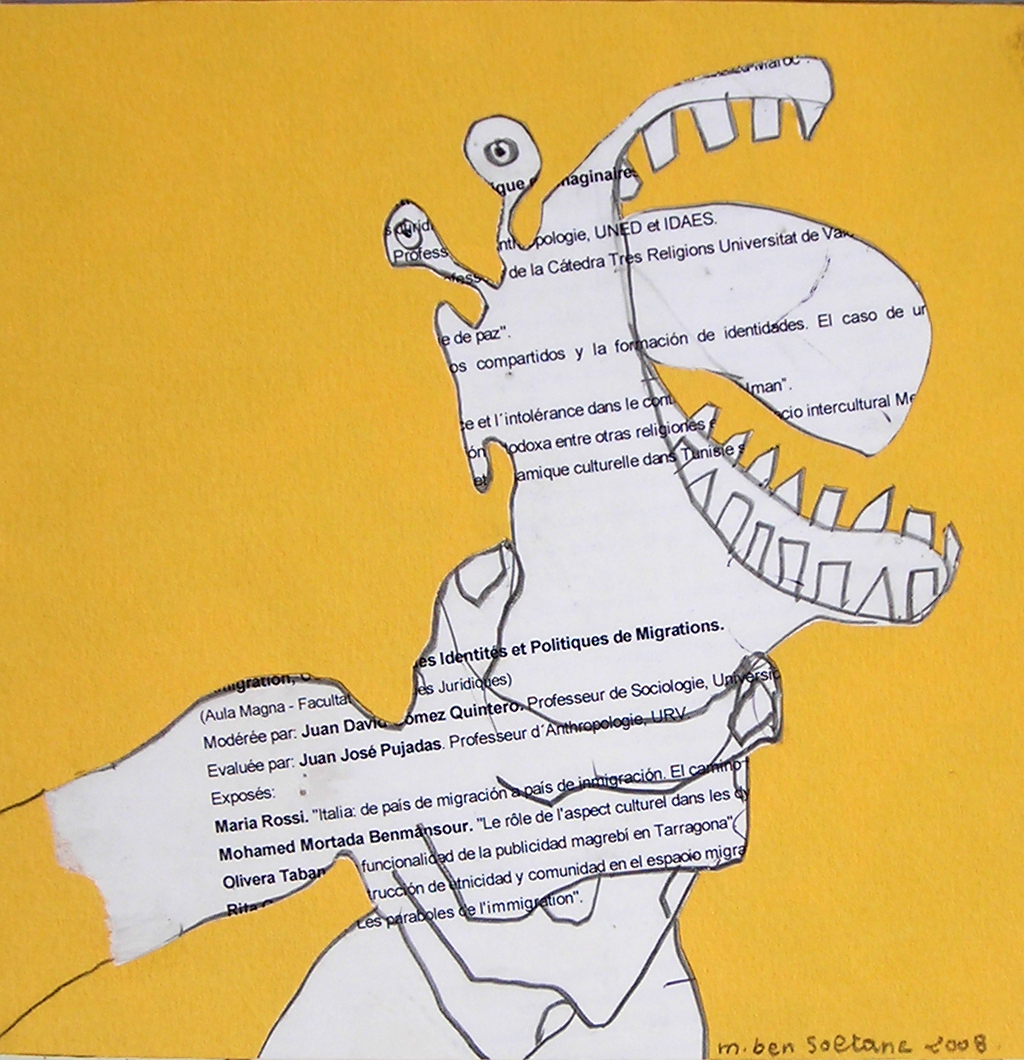 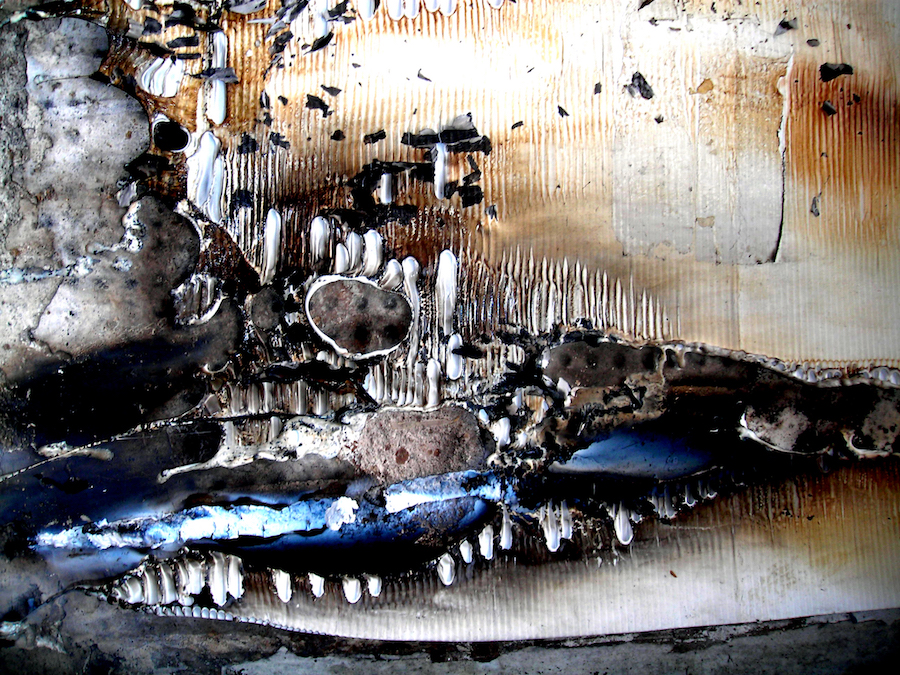 Mohamed Ben Soltane: I think that every piece of art answers the insoluble question: What is an artwork? My art is intimately related to my life and I can say that my artistic practice is like a witness to it.

After graduation in painting from the School of Fine Arts, I said to myself: What was left to paint after Tapiés, Velickovic, Vierra Da Silva, Mattieu, Hartung? Almost everything had been done. You just need to open your eyes to see all this informal, gestural, raw painting manifesting itself on the walls of my city, Tunis. Therefore, I started to photograph these “spots” which were for me, paintings. For me, it was like my personal exhibition. While I was taking these photos, I noticed the presence of tags and anonymous inscriptions on the walls of Tunis that were the visible manifestation of a deep social malaise and a space for free expression in a dictatorial regime. I felt a breath of freedom in this public and intimate space, and I began building series of photographs. In 2006, this work won the prize of the European Commission as the best photographic project in Tunisia.

After this experience, I started painting using organic materials like coffee and tea. Like a child looking at the clouds, I watched the tasks that turned into wacky characters, fantastic animals, or weird objects. This experimentation was the first step that allowed me to invent a plastic vocabulary that became my artistic language.

I’m interested in the topic of post-coloniality concerning the patterns of recognition of non-western artists that are proposed/imposed by the international art world system (this is the subject of my doctoral thesis and some artworks). After the liberation of Tunisia from the dictatorial regime, I felt that there was a need for joy, colors, and optimism in a society that was living (and still living) through very difficult times. I also worked on the idea of writing our own art history with our own reading grids and preserving the memory of our deceased artists. All those problematics are dealing with the concepts of freedom, resistance, continuity, authenticity, sincerity. I believe in the force of art to build knowledge, intelligence, and a strong personality rooted in and open to the world. I believe in being active in solving the big questions we are all facing today. We have to be part of that change, contributing our differences and not seeking to ape other systems.

AE: Your father was a ceramicist and you grew up in his mosaics studio alongside artisans who were making work all around you. How has this early introduction to artistic practice in the form of mosaics informed your own practice beyond this medium?

MBS: I love mosaics. When I was kid, we lived in a small house and my father used all the walls to make the preliminary drawings for his mosaics. It was my private museum. I also participated in the process of production. Making a mosaic piece takes a lot of time and nowadays, we are living in societies where we are fighting against time. I learned the techniques but also, the spirit of mosaics, and today I can implement this medium in modern and contemporary projects. I created mosaics with biscuits to criticize the expression “Africa is the future.” Are we speaking about the future of Africans? I used Photoshop to pixelate signatures of famous Tunisian artists that our country has forgotten. In a recent work, I produced a mosaic using a fragment of the discourse of the former French president Nicolas Sarkozy who said in 2008 something to the effect of: “We (the French) have intelligence and you (Tunisians) have a work force so we can undertake partnerships…”

AE: The visual aesthetic of your work is imbued with playful and colorful dynamism. What inspires the figurative imagery found in your work?

MBS: I think that inspiration comes from everything that touches your senses. For me, curiosity is more important than inspiration. You get inspired when you open your senses. All of us need to feed our imagination with art, science, technology, new experiences, meditation, spirituality. Then, we need to have tools to digest those stimuli and finally to give them a new life in the sense of production of ideas, objects, processes. I also feel that there is an energy that is very powerful if you know how to use it in your art. Sometimes, you need to stop producing (a kind of abstinence) and let this energy grow and explode like a firework in the canvas. My drawings were born little by little thanks to experiments. I would say that it is important to say yes to every experience because you’ll always get positive things even if the experience is not successful. The vocabulary I invented in the last decade came from those experiments and allows me to play with shapes and colors in a variety of supports. I think that my lines are going faster than my imagination and my paintings are the result of this “lâcher-prise” where you accept not to control the process.

AE: You’ve used various mediums throughout your practice, including painting, drawing, and installation. Can you speak to your choice of mediums and how they reflect or further convey what you investigate in your work?

MBS: I remember very clearly the day when I understood that art is strongly connected to freedom and that being an artist allows you (and does not oblige you) to use all the techniques and mediums you have in your possession to express your ideas. For me, mediums are just tools. After the experience of photographing the walls of Tunis, I wanted to experiment with the format of installation and video installation. From 2009, I started throwing in the crutches of artistic references and trying to stand on my own. I began to experiment outside the box and integrate disparate materials while reflecting on the role the artist should play in his specific context. Thus, we critically approached the Museum of Modern Art (which in 2009 did not yet exist in Tunisia and which was at least two decades late). We touched on this question in a video installation where I filmed characters over 80 who said: “Thank you for the museum.” I placed the screen in a cement bag in the middle of a pile of red bricks about the construction site that lasted for decades due to corruption. At that time, I also questioned the freedom of the press through an installation that presented the five main Tunisian newspapers as simple rags.

These five years of experimentation have also enabled me to work on a comic strip that raises the issue of cultural cooperation and the importance of designing cultural policies rooted in our reality.

MBS: When I was young, the only art book we had in our house was from Picasso, so I think that it is an important influence. I also had an exhibition in 2019 that spoke about this subject and how I was influenced by local artists like Abderrazak Sahli, Abdelaziz Gorgi, Nejib Belkhodja, and others. I wanted to insist on the importance of studying these influences to build our art history and teach it to future generations.

AE: How have you approached or adjusted your practice during the Covid-19 pandemic?

MBS: I was very prolific during the first lockdown. I thought that everybody would understand the seriousness of the situation, that the way we were doing things was wrong, and that we needed to change.  It was very challenging intellectually and artistically to imagine solutions in different fields. I participated in several projects like the book Etats des Lieux of the association jiser.org that tried to reflect on the artistic situation of eight Mediterranean cities and the digital platform archivart.co that presented an exhibition that raised money for the public health sector.

MBS: I’m preparing an exhibition in Vancouver that was programmed for 2020 and was postponed until 2022. I’m also working on a monograph book in 2022 and a solo exhibition at A/Gorgi Gallery that represents me here in Tunisia.