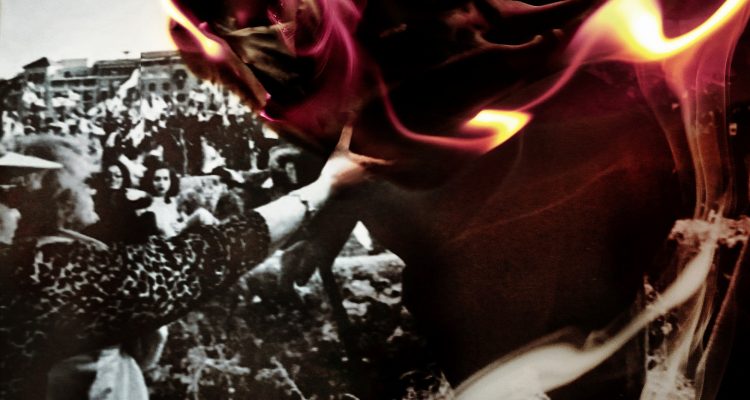 Beirut image on fire VII. The original burning image was published in the book “Beirut Mutations”, page 161. Manifestation following the assassination of Rafic Hariri on March 14, 2005.

ArteEast is pleased to present an interview with artist Samer Mohdad as part of our Artist Spotlight series.

Samer Mohdad was born in 1964 in Bzebdine, Lebanon. After the Lebanese Civil War broke out, bombs, exile, fighting, and the death of close friends and acquaintances marked his adolescence. In 1983 he moved to Belgium to complete his studies. He graduated with a degree in Photography from St-Luc in Liège, Belgium, in 1988 and subsequently began working for the “Agence Vu” in Paris until 2002.

In 1997, Samer Mohdad co-founded the Beirut-based Arab Image Foundation, an organization that seeks to archive and preserve photography from the MENA region. Most recently, his work was part of the exhibition “Football in the Arab World,” which took place at the Institute of the Arab World in Paris in 2019, then at FIFA museum in Zurich through January 2020.

Over the last thirty years, his photographs have been exhibited at institutions and festivals globally, including: the Rencontres de Arles in France, the 2014 FotoFest Biennial in Houston, the Blue Skye Center for the photographic arts in Portland, and the Sol Mednick Gallery and he University of Arts in Philadelphia. Samer Mohdad’s work is part of private and institutional collections. He is the recipient of numerous awards including:  the 1990 Canon award, the Word Press Photo award and laureate of the Jean-Luc Lagardere Foundation scholarship in 1992, the Mother Jones International Fund for Documentary Photography in 1999 and the Pioneer Photographer of National Geographic all roads program in 2011. 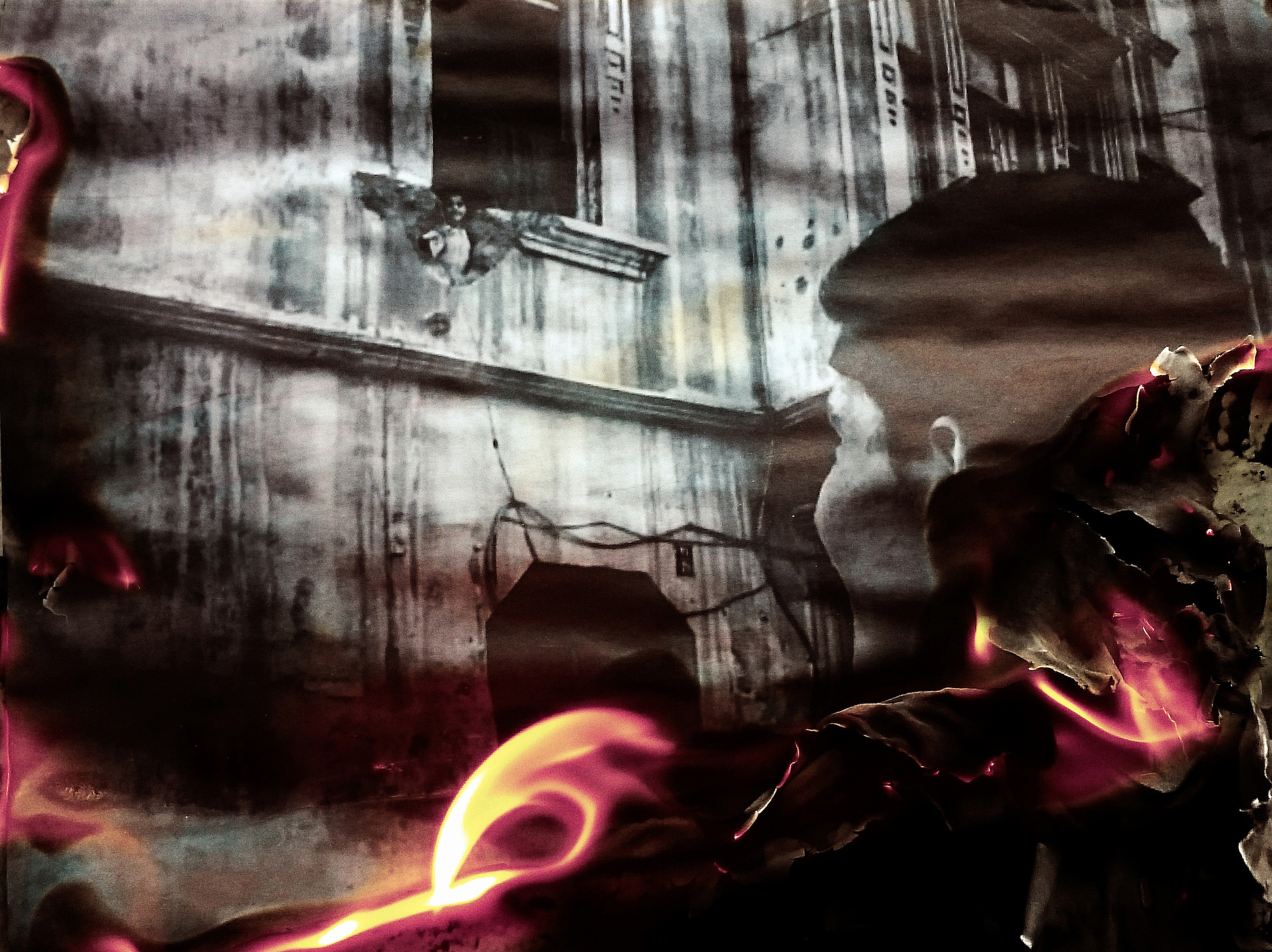 Beirut image on fire. The original burning image was published in the book War Children, Lebanon 1985-1992, cover.
Frontline between east and west Beirut seen from the west, downtown Beirut, Lebanon 1989 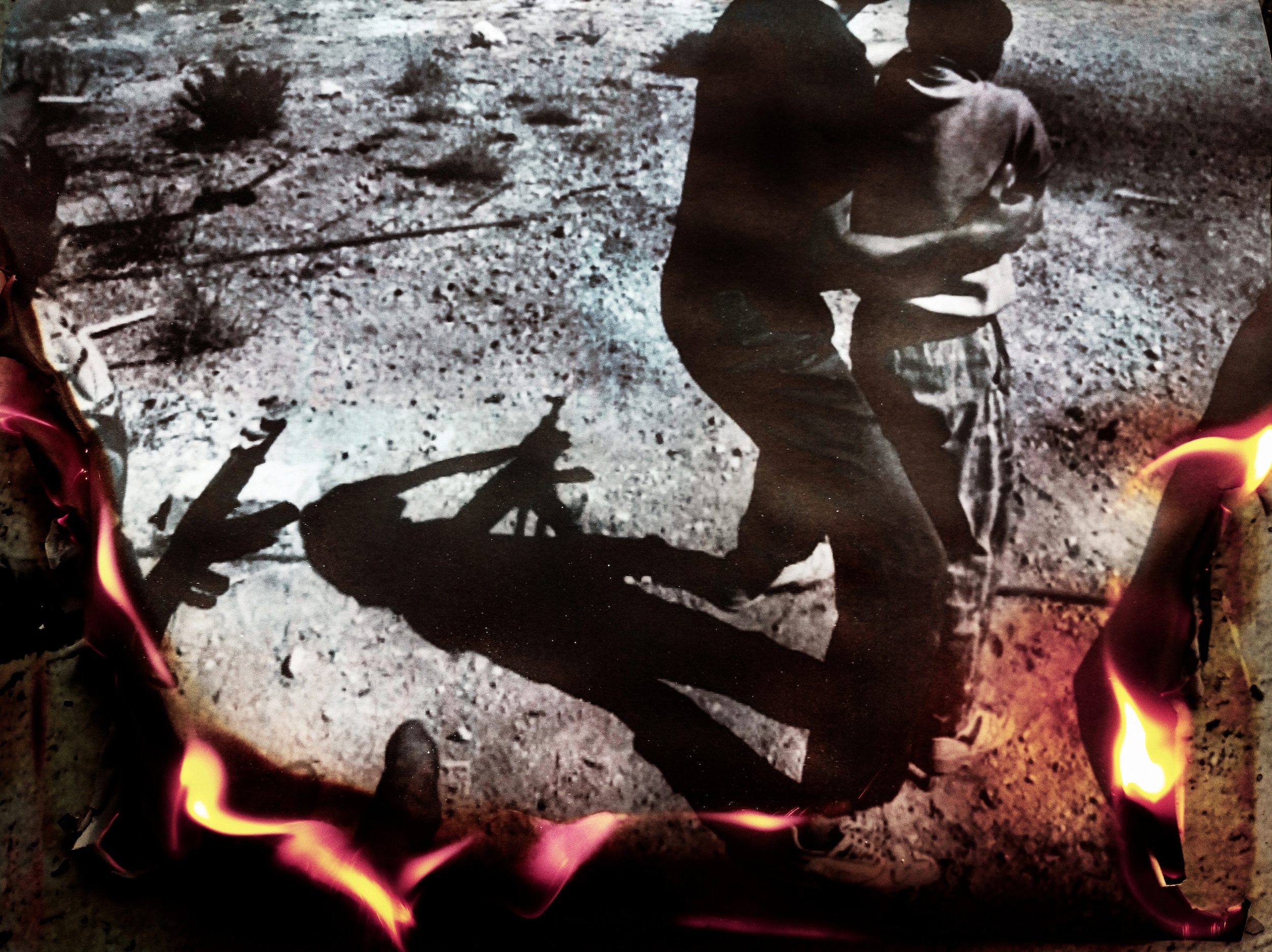 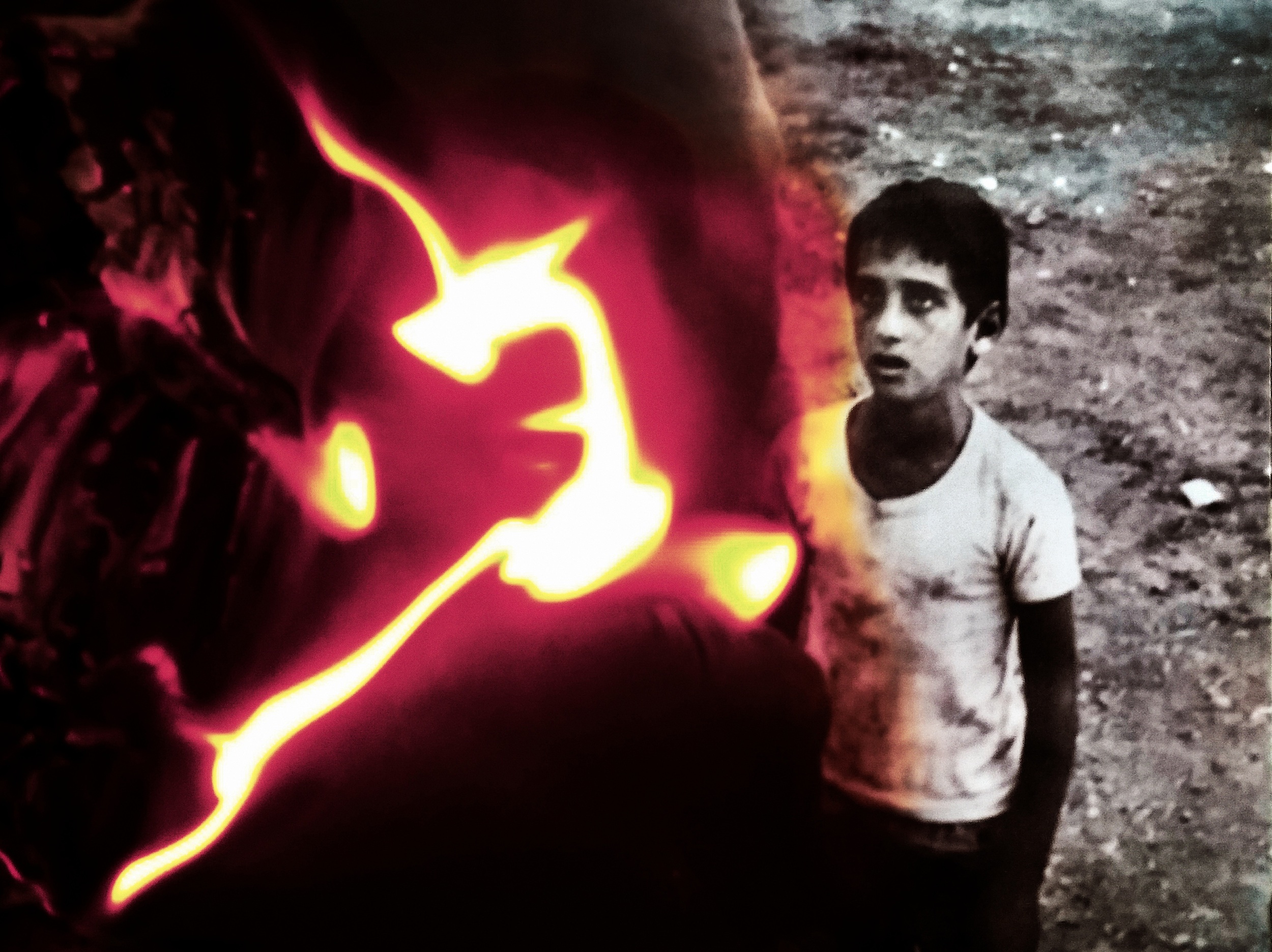 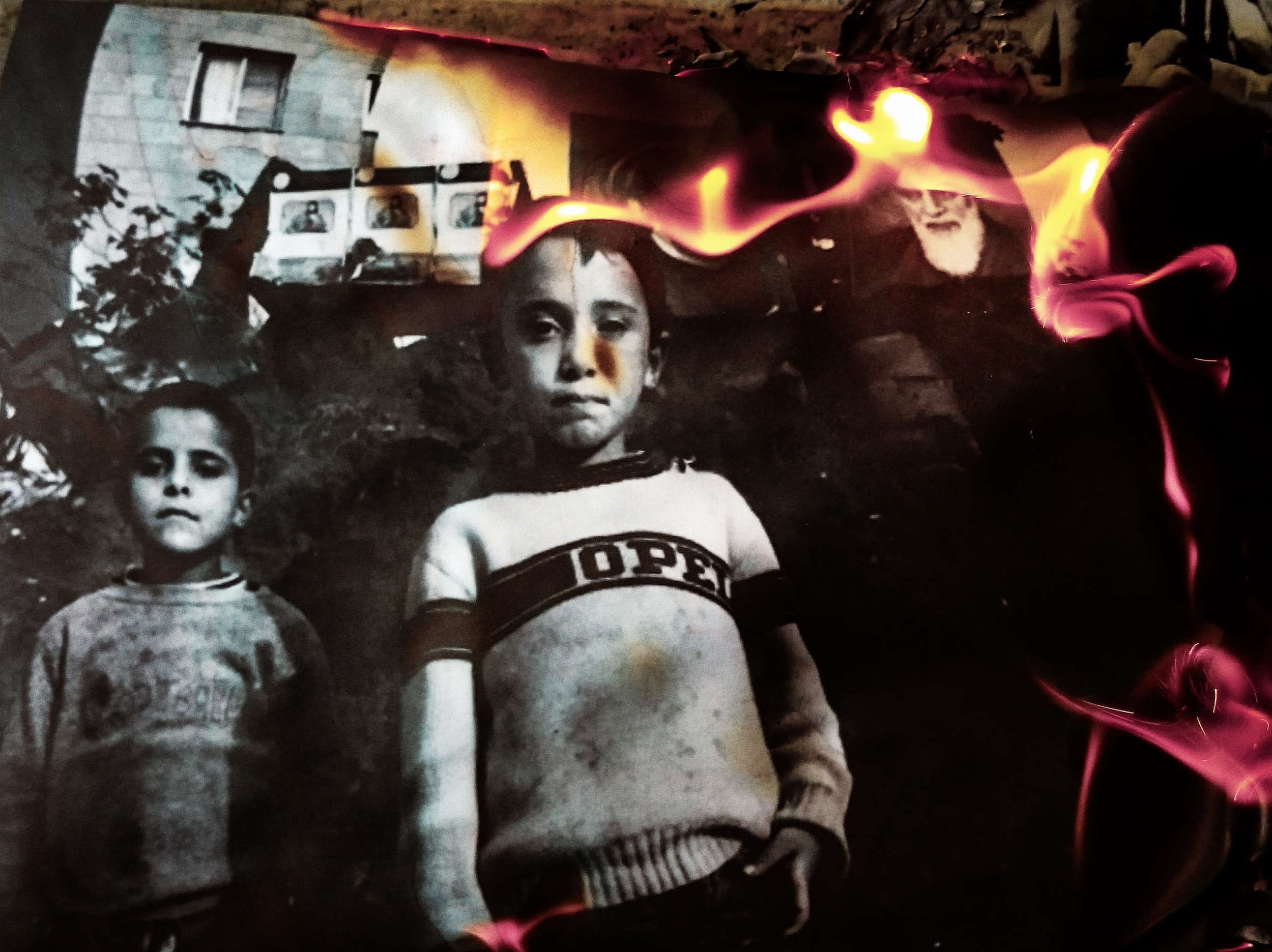 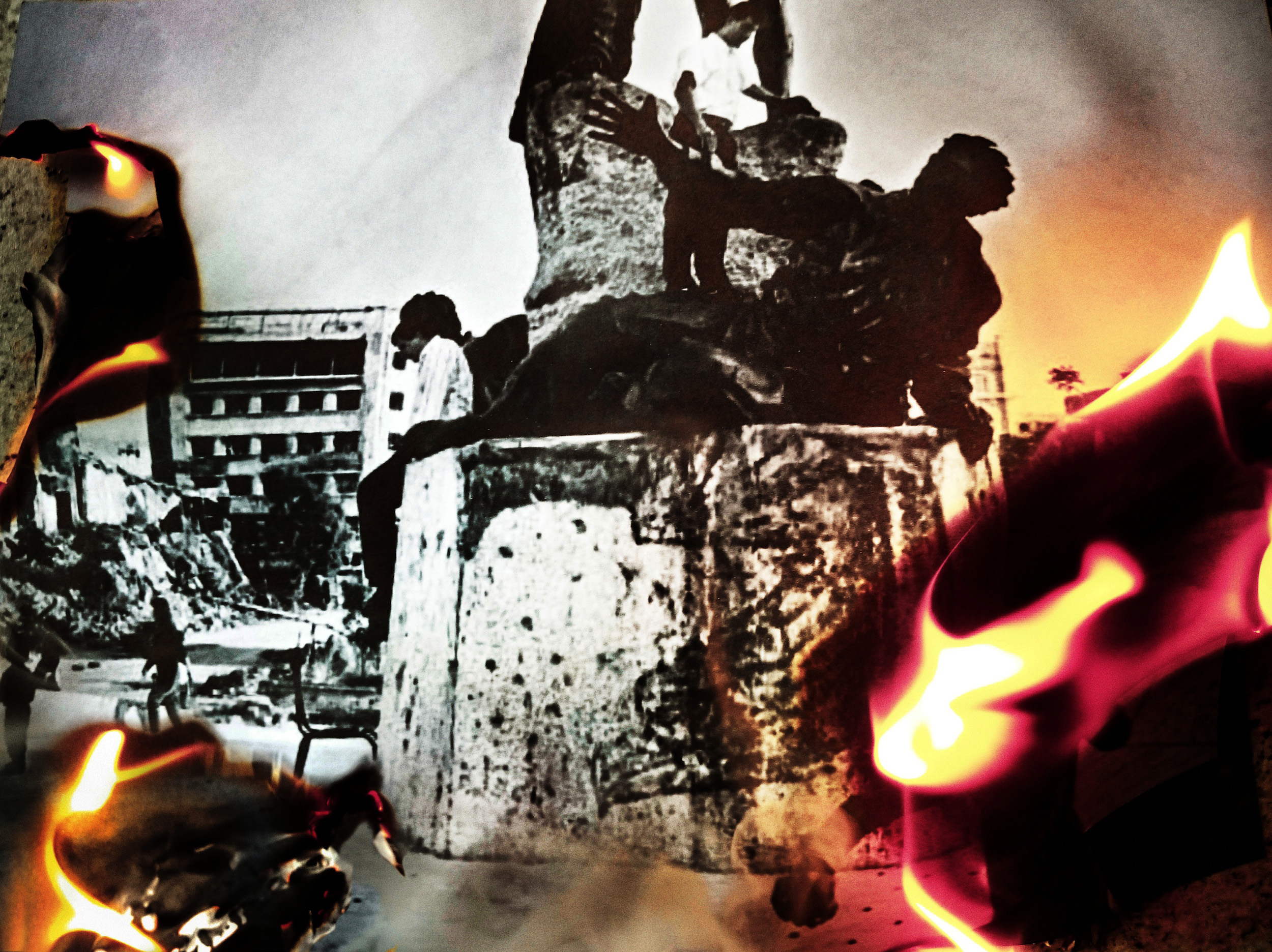 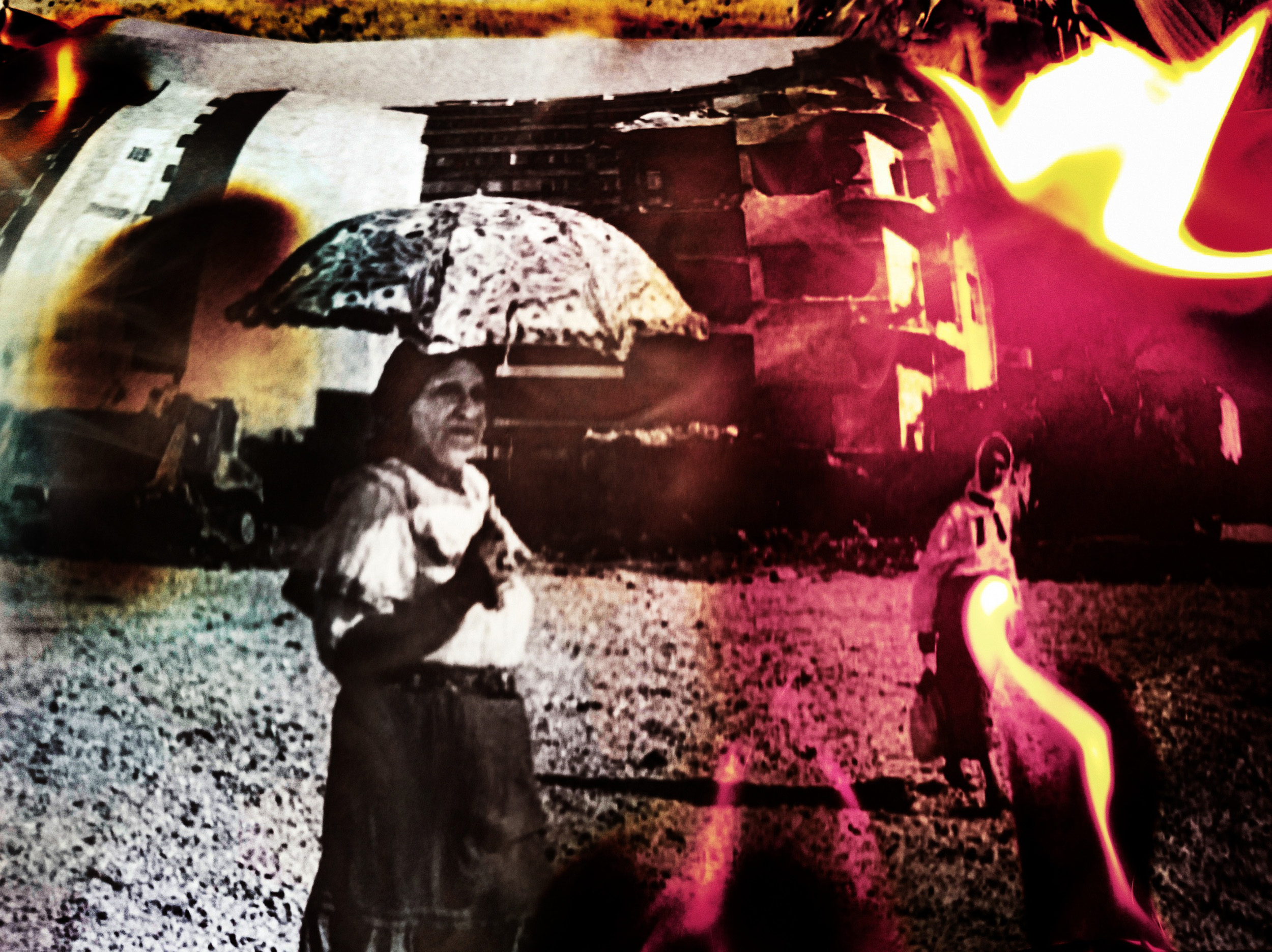 Beirut image on fire VI. The original burning image was published in the book “Beirut Mutations”, page 116.
Zeitouni district, previously known as the red-light district, located at the proximity of Beirut port entrance, 1995. 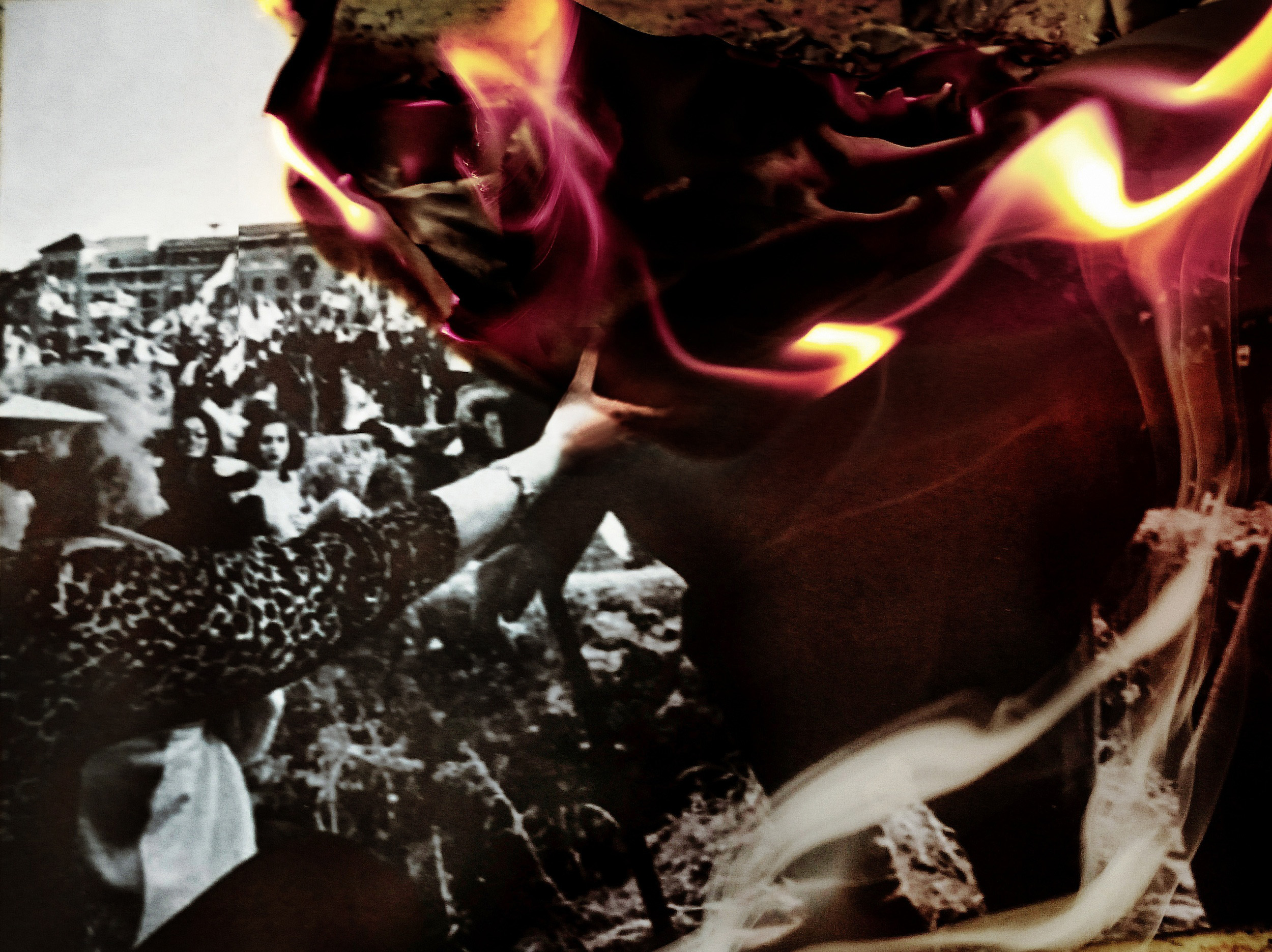 Beirut image on fire VII. The original burning image was published in the book “Beirut Mutations”, page 161.
Manifestation following the assassination of Rafic Hariri on March 14, 2005. 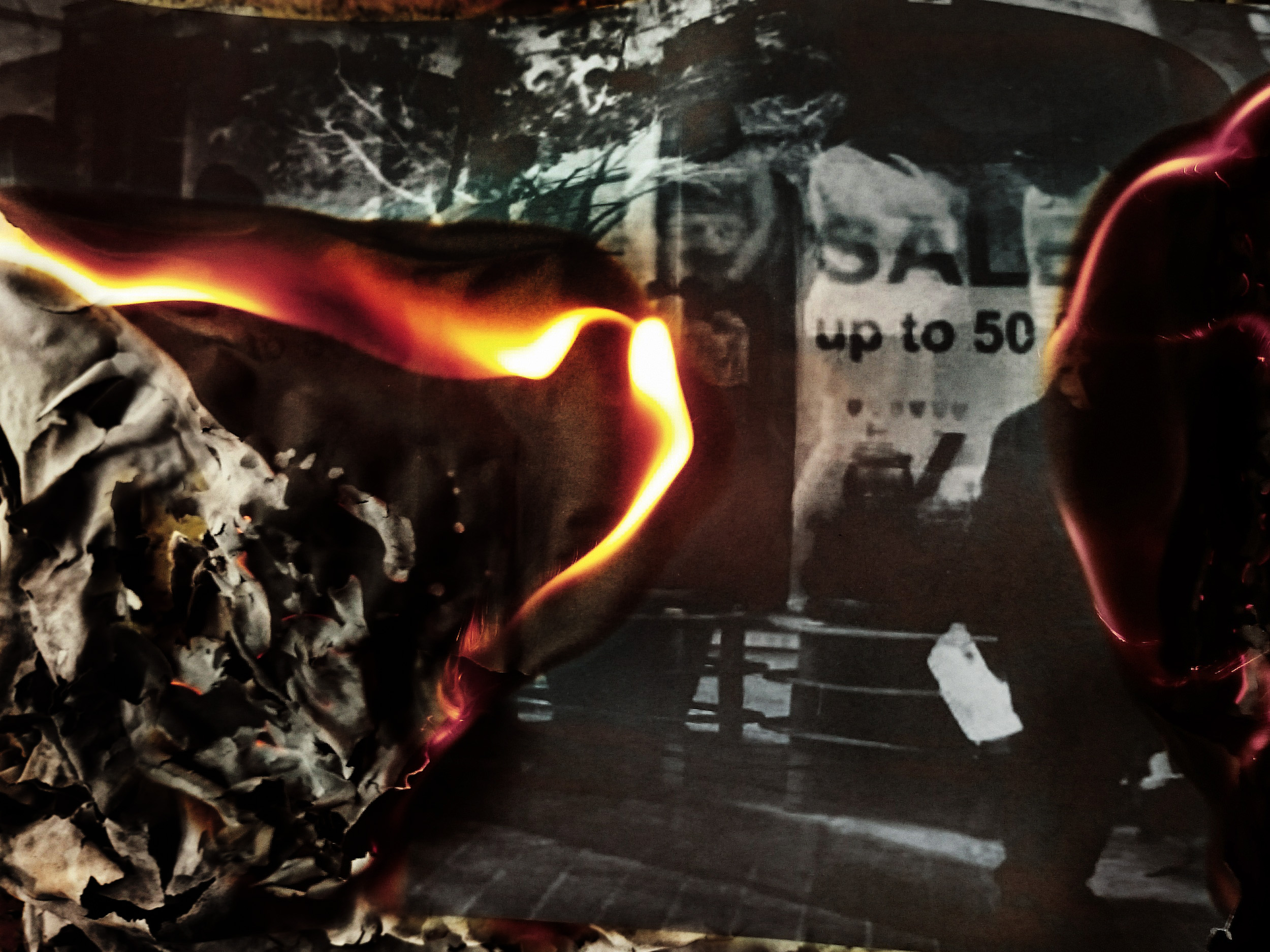 Samer Mohdad: Throughout thirty years of photography, I have focused on capturing the profound changes in the Arab world and documenting the central issue of socio-cultural developments in the Middle East and North Africa. The Arabs is a review of the highlights of this work, which also reads as a thorough exploration of the diversity and complexity of the Arab identity, which has been traversed for three decades by incredible geopolitical, sectarian and societal issues.Between 1985 and 2015 I traveled to fifteen countries (Algeria, Saudi Arabia, Bahrain, Egypt, United Arab Emirates, Iran, Jordan, Lebanon, Libya, Morocco, Palestine, Qatar, Syria, Tunisia, Yemen) undertaking artistic research, which constitutes a source of historical and iconographic documentation of anthropological evolution.

My views are “both near and far” of the realities set on film. They show visions of the Arab world that offer an insider’s point of view. I attempt to find an internal balance that conveys sense to images; between the man, the subjective witness, the photojournalist and the artist. Reading these images requires breaking away from the usual reading grids.

A selection of series were published in several books where I have told one or more stories to draw attention to invisible realities such as: child soldiers in the book The War Children, Lebanon 1985-1992 published in 1993; the fact that Gaza is currently controlled by Hamas in the book Return to Gaza, published in 1996;  Mes Arabies, published in 1999; highlights Iran’s strategic role in regional geopolitics as well as other topics ranging from the failure of the Arab peoples to come together behind a single identity, and Sufism as an alternative to Islamic Sharia’a, to religious minorities and the place of women in everyday society.
The book Assaoudia, published in 2005, takes readers on a journey at the turn of the twenty-first century to discover the hidden kingdom of Bani Saoud and their Bedouin traditions that intersect with Arab culture. Mes Ententes, published in 2005, tells the story of the return of displaced Christian families from Mount Lebanon to their villages of origin. Beirut Mutations, published in 2013, presents the changes that Beirut has experienced from the war until the present day. In each  page of this book, the lived facts are shared, at times by the images that reflect and reconstitute reality, or by the transmission of emotions directly experienced.

AE: Can you discuss your latest photographic essay project, Beirut Images on Fire?

SM: On August 4, 2020, 18:05, a deadly explosion occurred at the Port of Beirut. Experts rank its amplitude as the fourth largest non-nuclear explosion in human history. The damage was enormous. Two-thirds of the Lebanese capital was destroyed by the shock wave. The detonation was heard as far as Cyprus and windows were smashed at a distance of 50 kilometers. More than 200 victims were killed by the explosion and more than 6000 injured. Tens of thousands of families found themselves homeless, taking refuge in other places across the country.

According to official sources, the explosion was caused by fireworks that caught fire in the hangar where they had been stored with several hundred tons of ammonium nitrate. Apparently, the accident occurred as a result of welding work carried out by maintenance workers at the entrance to the depot. Some say it was rockets in transit through the port of Beirut that exploded in the first place causing the devastating blast that once again set Beirut on fire.

Hence, a fire broke out in my workshop. Prints of my photographic work on the civil war in Lebanon between 1975 and 1991, in particular from the series War Children, caught fire. Other prints from the Beirut Mutations series also burned. Instead of trying to save them, my instinctive reaction was to take pictures of the scene with my smartphone, as if the fire could be a purifier of all the evils experienced during these years of moral and spiritual suffering. My homeland is dying from an incurable disease, corruption, a genuine cancer that is slowly destroying everything. As I watched all these images burn and turn to dust, I was reminded of the Phoenician legend of the Phoenix rising from its ashes.

I was 10 years old when the civil war broke out in Lebanon. Since then, I have the impression that my native country has continuously been on fire and bathing in blood: invasions of foreign armies, (un)civil wars, and historical conflicts. My art emerged from within this tension. My work began to be exhibited in museums when photography was finally recognized as an artistic expression. When the Museum of Elysee in Lausanne and the Museum of Photography in Charleroi placed my photographs in their collections in 1990, the label or category “Arab photography” did not exist in the databases. It was necessary to create it and establish its foundations by setting up the Arab Image Foundation in Beirut, which carried out the work needed for the inscription of this visual art in the modern era.

When I watch all my artistic work scroll in front of my eyes a posteriori, facing these stories written with light, I question the border between reality and fiction, between a sentiment of acquired experience and a constructed sensorial impression. Isn’t this light / shadow, inside / outside, and reality / fiction interface the gateway to poetry? In the vision transmitted by my work on Arab identity all paths cross in Lebanon.

Today these photographic prints burn in protest, facing the desperate crisis that Lebanon is experiencing and they also stand against the horrors all of humanity is facing. I want the purifying fire to be able to create a space of hope.

AE: Since 1988 you have traveled extensively throughout West Asia and North Africa for your photojournalistic work, what do you feel has been your most significant body of work and why?

SM: All my works are equally important in my opinion. They have been made according to a concept in which I respect time sequences. Lately I have published a novel without photographs and only a single cover image. Voyage en Pays Druze tells the story of this mysterious religious community based in the Near East. I started my career shooting images on gelatin silver film. The entire body of work represents something like 80 thousands negatives. That represents a huge archive to manage. Only 10% of these photographs have been printed on paper and less than 5% published in books.

SM: In all my photography, I have sought out Sufism in the visual world. For centuries, Sufis have reached God through music, poetry, singing, and dancing. Today, I am using photography to reach out to the force that created life in the universe.
This Sufi state of mind helps me in the intimate mission of photographing the Arabs, by letting them reconnect to their inner selves, search for what they already know, and consciously map out their own path in life, instead of counting on God to do it for them.

AE: What projects are you currently working on? Do you have any upcoming projects or shows in 2021-2022?

SM: I don’t feel the same need I felt 30 years ago to move around in order to experience events that are currently unfolding; now, the images come to me. On the other hand, stories still have to be told, events of the past that provoked those of the present.

This work that I have been undertaking since a number of years inscribes itself as a natural continuation of my precedent work. It is the expression of my particular vision of our sinister world, in which I can no longer tolerate the hypocrisy of political leaders, those who navigate over waters infested with the blood of their people.

The last survivors is research that I started in 2010 in my mountain house in Bzebdine, a village located in the heights of Mount Lebanon. At the beginning, I was fascinated by the reflections of the light on the windows. These optical illusions that were produced through an image projected inside the other and which brought confusion, while still generating questions about  the how and the why, reflect my feelings toward the events that overload our minds.

Throughout my travels, my window mutated, it became the screen of my mobile phone. This window that is always open to the world accompanies me in all my movements. Now, it has found a base in a village named Tanlay, located in the region of Burgundy in France. Over here, I have the pleasure of living nearby a Golf course, which allows me to distance myself from the troubled times we live in. The repercussions of the conflicts over the Middle East are now felt everywhere on earth, including major cities such as Paris, London, New York or elsewhere.

I am currently working on the book and exhibition The last survivors. With Covid-19 issues and all restrictions imposed on all humans, it has become difficult to plan future events. I hope to realize this project in 2022.