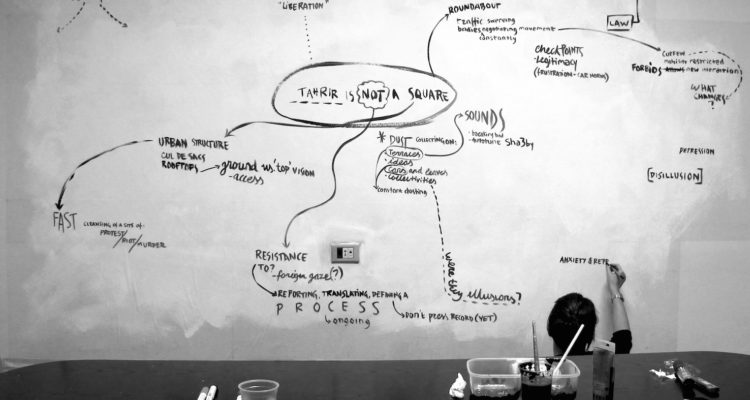 “There is something to be said about occupying time”

Lina: I am growing very aversive to the notion of ‘unfinished’, I have asked some copy editors not to use it because I didn’t understand that before but more than ever as means of resisting the ongoing state of depression after June 30 among us, and deeming that the revolution has failed, I think it is inscribed in my head more and more that it doesn’t make sense to think that the revolution is a story that needs to end ever happily or sadly. It is a state of mind. It is a condition. It’s not something that is supposed to finish.

Adelita: Do we want to write temporality?

Heba: Actually, what you said reminded me of something which we can either think of it as finished and failed or unfinished. So maybe, failed, unfinished.

Lina: There is something more and more naïve about this word ‘unfinished’.

Naira: Why? Because you think it implies something INAUDIBLE WORD 7:30.

Lina: Yea.  I call us collectively naïve. It is the state of naivete that revolution also  produces because it is an event that produces impatience. It also produces these illusions that things were really bad and all of a sudden, they will be so good because there is a revolution and part of that is this whole counter reaction; which is it failed, it is unfinished. We need to shift the paradigm to something else. It is no longer something that happened and that has a promise. It is a condition.