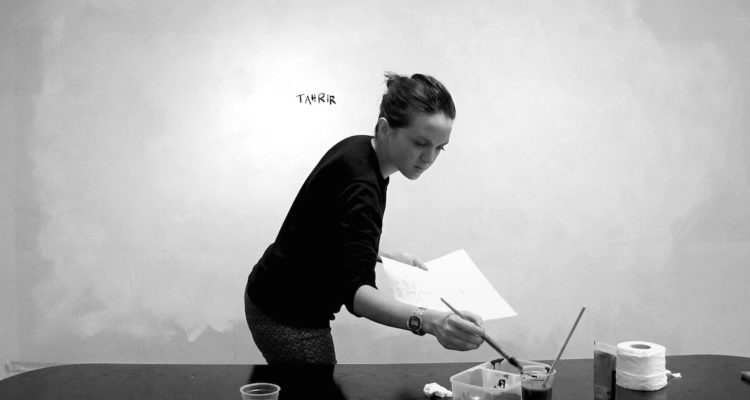 “Translators assume the role of the censor”

Adelita: ‘Coup’ was going to be another word we were going to discuss.

Antonia: Because coup could still be a change in the system, but not supported by the population, right?

Adelita: Should we look at it up.

Lina: Coup is cutting no?

Habiba: You are the French speaking one.

Antonia: So not just change, but cut. So it doesn’t relate to who cuts. We translate it to ‘colpo’ in Italian, which is ‘to beat’.

Antonia: In Italian we understand it as people probably coming from the government. So it more internal. Revolution would be mass, but a coup is actually internal.

Naira: People kept pointing out to me after June 30, regardless of weather this is a coup, or a revolution, that in Iranian, I mean Farsi, the word for ‘revolution’ is ‘inqilab’, which is what ‘coup’ is in Arabic.

Habiba: Ok: [reading] “coup d’etat: a sudden and decisive action in politics especially one resulting in a change of government illegally or by force.”

Naira: Can you say it again?

Habiba (slowly): “A sudden and decisive action in politics especially one resulting in a change of government illegally or by force.”

Adelita: “Illegally or by force”.

Antonia: But is it not similar to revolution?

Habiba: Kind of, except for illegally or by force. There is no specification. They don’t specify.

Adelita: There is a different type of agency involved in the notion of a mass of people…

Habiba: Into their own hands.

Naira: Can I ask Mada people, because I think almost everyone would agree that what happened on June 30 is the definition that Habiba just read out. But we don’t use the word ‘coup’. We never had a decision making process around it, but we always used words like the ‘ouster’ of Mohamed Morsi, or ‘military-backed ouster’. But we tend to use ‘ouster’ not ‘coup’ and that just kind of happened.

Adelita: What are the implications of using these three different words? Let me write them down.

Antonia: But what is your question?

Naira: Mada people, would you use the word ‘coup’?

Maha: I wouldn’t use it just like that. I would say a c’oup backed by a popular movement’.

Lina: My main problem with it is the adversaries’ use of it.

Heba: I don’t think I would use anything that suggests a judgment on my behalf. So, if it is controversial, I would just want to say something that doesn’t…

Adelita: So when we encounter terms that are more controversial, the idea is to try to be more objective, and I don’t know if that’s possible? But also more specific? Or culturally sensitive?

Heba: Specific is accurate. Descriptive, you don’t give it a name, you just describe what happened.

Adelita: Is that necessarily being more objective?

Maha: This is censoring, self-censoring. I don’t know.

Naira: It’s the conversation that we pointed out to. That was the conclusion in the end. We had a discussion of terms and then someone said how about we don’t name it, this is what Dina said.

Heba: If I was writing an opinion article, I would say ‘coup’. That’s what I think. But if it is what I think, then I don’t want to have it in a news article.

Dalia: My friends don’t think it is a ‘coup’ but I used the word ‘coup’. But they are against me and then we fight.

Antonia: What do they use.

Dalia: They don’t use revolution per se. But they definitely don’t think it is a coup.

Heba: but if it is not a coup, and not a revolution, what is it?

Maha: Yea, once again, I wouldn’t define it, even with my friends, with just one term.

Maha: By the military.

Everyone talking at once.

Adelita: What other words can we use instead of coup?

Naira: We use ‘ouster’ actually.

Habiba: They use ‘uprising’ all the time.

Habiba: ‘Rebellion’. But I am not sure. Because the Campaign, the June 30 campaign was called Tamarod.