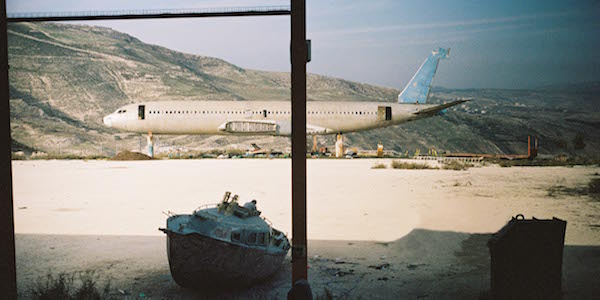 Traj-pop, or Traj, as it came to be known in Early Martian society, is considered by many to be the foundation of post-earth culture. Our canon is formed of what’s left of its culture, and its dominance was unchallenged until its swift demise following the establishment of the first break off settlements.

It is generally accepted that the demise of German Tragic-pop was the result of Early Martian society being destroyed by an unprecedented form of capitalism that had as much in common with pre-enlightenment European feudalism as it did with late global capitalism. In this essay I will challenge this assertion and demonstrate that what caused the demise of Tragic-pop was the advent of a pseudo political/cultural discourse that corrupted the amoral nature of Tragic-pop and forced it to defend and explain itself, rather than continue with its pursuit of pure aesthetics.

After it was set up in 2026 by a conglomerate of businesses, the first Martian settlement was immediately divided into two groups: The customers and the employees. The enjoyment of everything in this new settlement was the prerogative of those who were perceived to have earned their place in the settlement: wealthy Earthians, and later, their descendants. This divide lasted for generations and was rarely challenged. Those who did dare to challenge it soon found themselves on a ship headed back to Earth.

With very little interaction with the old world, the founders of the new settlement were free to set up a new society based on values they felt were constantly compromised. Those free men and women were not apologetic about the two-tier structure of their society. They believed that they had earned their privilege through a lineage of hard work and industry.

Isolated in space, Martians lost touch with the roots of their ethos. The idea of the wealthy individual as virtuous, with the wealth being a reward from god to the individual for enacting his will in the world[1] still had a strong presence on earth, even if most of its adherents claimed they did not believe in religion.

Gleeful with the success of their settlement and cut off from the world, the Martians quickly forgot the orientation of their ethos toward an abstract god.

Martians, with their god forgotten, suspended in the heavens facing infinite worlds, were left face-to-face with the tragedy of being mere mortals. This head on collision with the human condition, coupled with the self-congratulatory impulse of the protestant ethic, materialized in Tragic-Pop.

Advent of The Melody

The musicians of the early Martians were self-aware but not self-critical, which allowed the music to reach its zenith as an art form, and to aestheticize uninhibited Martian values. The quality of the music was not termed ‘good’ or ‘bad’, it lived or died by the strength of its performance on the market. This performance, and the extent to which Martians ‘Liked’ a pop song, was driven by a commitment to an aesthetic ideal, which like all ideals was steeped in moral judgment. What set the Martian one apart was its abstract nature. There was no place for criticism, nor were these pop songs subjected to moral crusades by politicians and misguided activists.

Over the decades, the intense competition in pursuit of aesthetic pleasure cultivated an idiosyncratic understanding of music for Martians. With incessant advertising, constant production of better and more original melodies, and the availability of all music to all free men and women, a collective belief started to emerge: “there can be a pop song with a melody so powerful and beautiful, that whoever hears it will be enamored with it for the rest of their lives, and will never need or want to hear another”. This melody was imagined as something of an auditory heroin, a riff so sublime and ethereal that it engulfs whoever hears it within an unbreakable happiness. The idea wasn’t explicitly articulated until the late Early Martian epoch, when it started being referred to as ‘The Melody’ and slowly went on to consume the imagination of the privileged Martians.

The quest was not exclusive to musicians. Martian society (those who were served) as a whole was geared towards the achievement of this ultimate melody. A new release was quickly taken up as a possible ‘The Melody’ candidate; only to be dropped by a perfectly functioning direct monetized democracy. A democracy, much like the original Athenian one, available only to some.

The relentless pursuit of the ‘The Melody’ came to fruition in its failure. The most stunning and beautiful melodies to ever exist came packaged in pop songs that consistently aspired and failed to be ‘The Melody’. Those pop anthems conveyed the beauty and despair of this prosperous and unforgiving society.

Agile, yet full and rounded, with lengths that rarely exceeded four bars, these monophonic melody lines were orchestrated with very spare layering, giving it a porous, airy texture. Curvy timbre hooks sank deep while the surface was given to sonorous plateaus that went on for five or six minutes at a time. The repetitive riffs, set below a din of meaninglessness, a beauty lost in long swathes of abstract horror, entirely cut off from meaning and tradition, had a power over the human soul unseen since the first articulation of the concept of God.

The beauty of this music was the beauty reserved only to cultures sufficiently isolated, industrious, and willing to reach the extremes of their beliefs. Hegel taught us that truth lies in an extreme constantly sublated, absorbed, giving life to another extreme, and so on. Centuries later, Abu Taleb, finally returning home just days before his untimely death, went a bit further and stated that ‘Beauty lies in the extreme’, a statement vindicated now but much maligned at the time. One can only imagine the gleeful reaction of the famed poet to Tragic-Pop had he lived long enough to witness it.

After four generations of calm, with the lower class growing in size and with the threat of displacement back to Earth no longer feasible, the stirrings of change started to rattle and the oppressed lower class of Martians revolted over the explicit and non-penetrable discrimination they suffered. They felt little loyalty to the first colony and saw in it no place for them as equals, and so they chose to set up their own.

With this first break-off, and the subsequent establishment of other break-off settlements with challenging value-systems, the energies of early Martians were driven from the happy, tragic contemplation of the human condition to questions of identity and representation. They were challenged with values and morals that differed from what they took fore-granted, and their artistic endeavors became burdened with apologetic and self-explanatory themes. They wanted to explain themselves, to form a coherent moral code that somehow vindicated them from their legacy of privilege and abuse. This need soon found its way to Tragic-Pop, and as a result it became diluted and compromised, a gutted corpse of a raging stallion.

The existence of a set of unchallenged values meant that the halving of music into highbrow and lowbrow in which the two halves do not make a whole, a condition posed by Adorno, a once-influential contemporary of Walter Benjamin, was never there to begin with. The Adornian problem only appeared later on and reflected the demise of the music of the early Martians because it asked music to step outside itself, to present a critique, and become a contrived assertion of a challenging set of values, which are in their own right dubious and mercurial.

At the same time, Martians who wanted change and sought to achieve it by calling for a conscious, moral pop, conveniently pulled their fight for change from the battlefield to the comfort and luxury of music halls and art galleries. They held up revolutionary, egalitarian ideals, yet shied away from costly confrontation and necessary violence.

What ensued was a long and overwrought political process that seemingly permeated all aspects of life in the colonies but in truth was in none. It corrupted music and the arts, sank the forces for change in a vortex of dialogue, and gave the Martian ruling class and their rising adversaries a convenient simulacrum of change.

[1] The Protestant Ethic and the Spirit of Capitalism, Marc Weber.