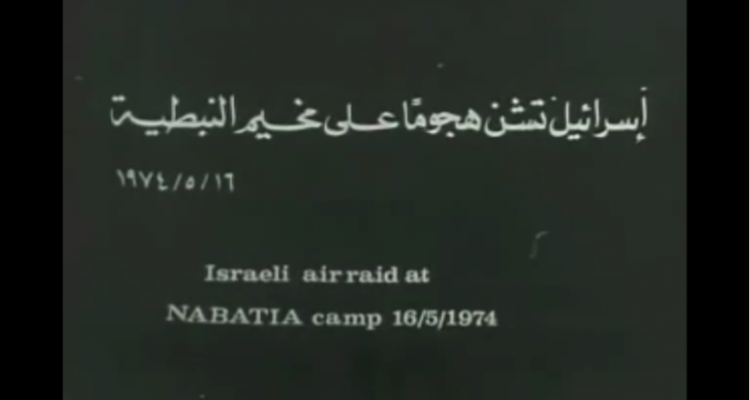 Here I am standing at the end of this film
and I can’t resist but return to
the beginning. To the very first
questions. How did they produce
those images? Why was there an
urge to record oneself in the act
of resistance? Why do I or we go
back in time to understand this urge?
Is it to understand our selves?
Our history? History of image? Our
image?

I stood in front of a mirror. I
looked at my body and saw past
everything around me. The room,
its walls, the sofa, the books,
the tiles, they were all gone.
I stared myself into my own eyes.
I saw another woman and I was
her double. In the reflection of
the mirror beyond the body of which
I was the double stretched a landscape.

Very wide shot of an open landscape. In the center is a field of short grass. On the right of the field is a vineyard. On the left a cornfield. The stalks are yellow. The horizon stretches across the frame. The late afternoon sun stains the cloudless sky.

On the grass three figures are sitting, with their backs to the camera. A scene repeatedly played out in my mind.
Every night, at exactly the same time.
The repetition was perhaps a way of a
perfect inscription of the scene in my
mind. It never changed. It is this scene
you are watching right now. It will never
stop repeating. I wrote words to describe
the scene, but they never say the image.

The three of us. A family of three.
A young man. A young woman. A small
child. We stood there on the field,
open field of short grass. We sat
on the ground, the three of us. The
field slightly sloped downwards
towards a mass of trees.

Wide shot of the three figures sitting in the grass field that is sloping inwards of frame, their backs to the camera. WOMAN (31) sits on the right of CHILD (2) and MAN (31) sits on the left. Woman and Man are looking ahead, while Child seems to be playing with something in front of him. Everything is still, only Child is in motion. Two magpies cross the frame. Child looks up. How was I to transcribe this
feeling that was upon us as we
stared into the woods? It was
there in the folds of the
darkness staring right at us.
The uncertainty. The uncertainty
with which they, the filmmakers
lived with every shot of the
revolution, every frame of
the struggle they took.
And there was our own uncertainty
tangled up in the darkness, inside
us, inside the forest. How to write
this film? How to write our own
voices to stand against their images?

Medium shot of the Woman, Man and Child sitting on grass, their backs to the camera. Woman and Man are looking ahead, while Child is pulling the grass under his legs while chattering to himself. He throws handful of grass into air. He giggles. He repeats the same action few more times giggling every time.

Woman and Man watch the Child stand up and exit the frame. Woman is dark skinned and has deep dark eyes[iv]. Man has thick dark eyebrows under which his green eyes look further beyond Child[v]. They are smiling while watching in the direction of the child.

Man turns to Woman. They look at each other.

Wind blows in her brown hair. Their smiles slowly fade[vi]. They turn their heads and look ahead. Child enters frame right running.

Child stands between them looking in the same direction as Woman and Man. He looks at Woman and takes her hand pulling her up. She smiles, Man looks at Child and smiles. They begin to rise and stand up. Woman straitens her dress. Man picks up his hoody from the ground and cleans it from pieces of dry grass. Child watches them. Man takes Child’s hand and Child takes Woman’s hand. They move towards the right of frame.

Same frame. Man, Woman and Child are no longer there. Camera travels forward in the same direction Woman and Man were looking, moving down the slope. A forest enters frame. Thick line of tall trees cuts the end of grass field. The crowns crowding against each other expand far towards the horizon. Endless. Sound of tree crowns moving in the wind slowly approaches.

Camera travels closer to trees. Sound of tree crowns thickly packed moving in the wind grows and reaches the full intensity as the camera stops in a wide shot of the forest.

Hardly anything is seen inside the forest. Spaces between tree trunks emanate only darkness.

Sound of tree crowns moving in the wind continues.

How to transcribe an image, a moving
image, that is about to implode
with an unbearable feeling of
uncertainty? How to transcribe a
moving image that exists in the
present and in which the past is
situated within the same frame?

Sound of tree crowns moving in the wind fades out.