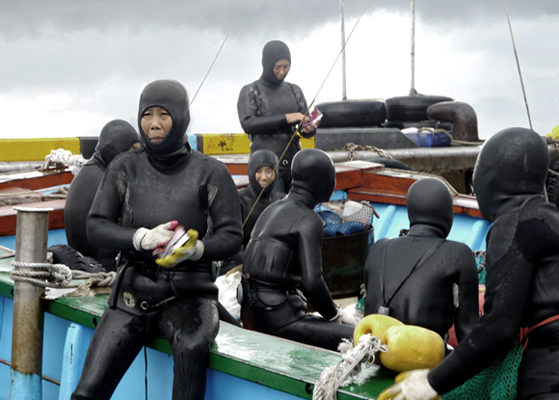 The Breath Sound of SeaWomen Over the past fifteen years I have been exploring the human voice, thinking of it as a malleable sculptural material and a conceptual tool to explore human experience. At first, both the voice and breath seem to resist representation and give rise to a dynamics of dematerialisation and ethereality; certainly there are thinkers and artists who choose a purely metaphysical or formal reading of the voice. However, reading the voices produced by bodies as non-material (i.e. as signs of transcendence) is disconcerting. It seems to reproduce a model of thinking about the body and its products, familiar in capitalism which places extreme focus on the body (as a producer, a consumer or a commodity) in order to ultimately annihilate it for the sake of a ‘transcendent’ value – how much it is worth. Engaging with the voice expands further than the realms of formal, plastic investigation and metaphysics. It inevitably leads to a deep engagement with people, politics and the human psyche.

A quest central to my work has been to explore the reasons for the production of vocal sounds which are beyond language and its rules, and the meanings we attach to the ‘nonsense’ sounds we invent. Sometimes I like to think of them as somewhat anarchic, as deserters or rebels, occupying an outsider’s position in relation to syntax, which is the ‘army of language,’ as John Cage also observes. I have studied such sounds in the context of community formation and professional identity. In recent works I have turned away from my voice, toward the voices of others: other artists or members of different communities (often marginal), whose professional identities, cultures and sense of togetherness are tied with the production of unique sounds and vocal practices. One such community is that of the haenyeo: female sea-workers on the North Pacific island of Jeju – a small patch of black volcanic land which belongs to S. Korea, and floats between China and Japan. Operating outside the currents of modernization, the haenyeo (literally meaning sea-women) are an ancient and fast-vanishing community that now consists predominantly of sixty to ninety-year-old women who dive to depths of up to twenty meters with no oxygen supply to catch sea-food, collect seaweed and find pearls. This is a gendered profession practiced only by females. There are several reasons for this. A physiological explanation is the distribution of fat in women’s bodies, which insulates them against the cold and allows them to stay in the sea for as long as eight hours even during the coldest winter months. A socio-political factor is the sexism in Confucian law, which, until the beginning of last century did not recognise female labor, excluding the heanyeo from taxation. Thus, the diving women engaged in a low-status profession and worked against the will of the state, but brought their entire income back home.

A haenyeo may dive up to eighty times a day. Each dive lasts up to two minutes and is punctuated by a combination of sounds, including a high-pitched breathy shriek or whistle; an arguably spontaneous vocal firework bursting out of the mouth, which one might mistake for a dolphin or a bird call. At once alarming and joyous, this sound is as thin as a blade marking the horizon between life and death. The diving women make a living by constantly negotiating the limits of that which sustains them, their breath. But they come prepared. They are equipped with the sumbisori: an ancient breathing technique, which has been practiced for centuries. It is taught by one generation to the next, when new girls start diving with their mums or grandmothers at the age of eight.

The little research that exists on the physiology of the sumbisori reveals that the technique entails exhaling very rapidly all the carbon dioxide accumulated in the body, and quickly inhaling fresh oxygen. The lungs of the haenyeo shrink from the pressure in the depths, and, hungry for air when the diver resurfaces, they expand, causing a violent inhalation and a high pitched wheezy whistling gasp. These sounds, occupy high frequencies above the noise of the sea, and are easily identifiable. The haenyeo have limited vision above water resulting from their underwater masks or because of high waves. Therefore, when at work in the sea the sounds of the haenyeo could be said to function as aural signals and acoustic location markers. Also, to the trained ear, each sumbisori has a distinctive sound; it is an individual acoustic signature that is produced in the different mouths and bodies of each woman. The sumbisori with its aural production is a work skill – a specific craft which a young hanyeo begins to learn as a young girl and takes years to perfect. Practiced only by women and passed on from mother to daughter, this is a gender-specific skill that is trans-generationally transmitted, creating an inter-generational aural bond that ties the community and functions as a sonic signifier of professional identity.

The subtlety of the word sumbisori reveals an additional layer of meaning. Literally translated as breath-sound, I am told by haenyeo researcher Dr. Cha HyekYoung, that the word sumbisori is also parallel to that of ‘overcoming.’ She explains that the haenyeo were the ones who lead the anti-Japanese resistance movement last century, and witnessed the large loss of the male population on the island after the fall of Japanese rule when American and South Korean forces massacred those suspected of supporting the reunification with North Korea. In this light, the sounds of the sumbisori become charged with the expression of trauma and the working through of suffering; they are impregnated with the potential to operate as a marker of a historical event, and a non-verbal transmitter of memory, of resistance, of rising above the circumstances. Therefore, the sumbisori is a complex cultural sound-object – the product of a subculture operating within a particular political, geographical, historical and gender specificity.

Recent statistics reveal that the haenyeo community, which comprised thirty thousand women forty years ago, is now on the brink of disappearance. In the 1970s it was the leading economic force on the island, creating an economic and social system in which women occupied leading roles – a glimpse of matriarchy in an otherwise patriarchal Korean society. But the scale of fishing has changed radically since then, while the women insist on traditional and sustainable (and for some, eco-feminist) practices outside the mainstream of industrialization. In addition, water pollution and the warming of the seas have diminished haenyeo’s profits, and occupational hazards prevent it from being a popular career choice. In parallel, there are no encouraging economic circumstances organized on a national level that could transform the future of the profession and provide the right incentives for younger women to engage in it. Subsequently, the profession is declining as the old haenyeo die out. It is hard to envisage the aural practices of the haenyeo community, which form a unique sonic subculture interconnected with skill, without their professional practice. The sounds of their community – songs, debates, communal bathing, the submisori etc – make little sense divorced from the women’s sustainable work, their reversal of traditional gender-roles, their deep sense of community and egalitarianism, their collective economics, and sense of professional identity and unique purpose in later age.

However, as each inhalation is followed by an exhalation, the work practiced by the haenyeo is in a state of perpetual incompletion – a dual movement of possession and dispossession, of a ‘within’ and a ‘without.’ This is being. Being negotiating a vacuum, and as Allen Weiss says, ‘being by porosity.’ Becoming filled and becoming empty. This is what the sound of their breathing technique suggests – becoming full of oxygen and life, and letting go of life. Like being pregnant and giving birth; holding the mysteries of labor and life-bearing. In my search to find the meaning of the sounds of the diving grandmothers of Jeju, I heard a sound that operates beyond (male) Logos, and is created outside the mainstream of modernization and economism; I heard an ancient craft and a trans-generational bond, a cultural sound-object and a transmitter of memory and resistance; I heard an acoustic signature of a community and of a professional identity, its fun and purpose.

The Breath Sound of SeaWomen