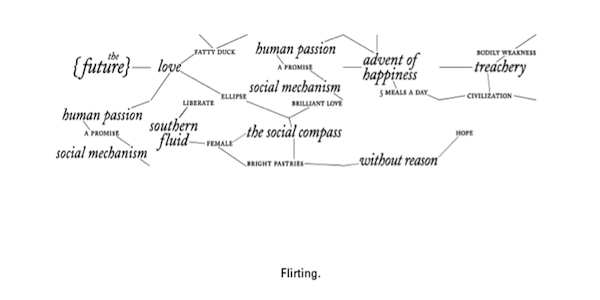 Artist Paul Chan wrote a text for e-flux in 2008 entitled What is art and where does it belong? He describes the first piece of art he ever bought and how he negotiated its presence in the home. There are multiple futures for a work of art, its context endlessly shifting with each placement, and yet Chan’s text brought to light the questions that occur when an art object ceases to be an object in its own right. Art is also a performance, a font, an animated gif, to name just a few. Over the years, Chan has played a host of roles, from writer, designer, publisher, to speaker, exploring video, New Media, collage, animated gifs, and typography in the process. His series of fonts, The Future Must Be Sweet – after Charles Fourier, change based on what is written, the creation of the image on the page controlled not by Chan as the font designer or artist, but by the user itself.

Utopian Socialist Charles Fourier thought the world should be organized around our pleasures: everyone should have equal access to affection, justice, and exquisite food. Paul Chan’s font reinterprets Fourier’s philosophy into a textual graphic system and gives form to the unique connections Fourier made between radical politics and utopian desires. Different relationships between the letters (and words) develop based on simple changes in point size, page width, leading and kerning. The fonts are Chan’s way of keeping a particular notion of new media alive: that of free access. The fonts are free, able to be downloaded directly from Chan’s website, and able to be reinterpreted and reconstructed in a variety of ways. He says, “I think this is actually the one of the most interesting notions we have now. We live in a time when scarcity may not be what gives something value. Like musicians, who give away whole albums for free in order to continue working and living, we’re seeing that scarcity does not create value as much as it used to.”

The tiger is like a background noise that reminds the characters of their intrinsic limits, driving them out of reflection, crisis or a particularly strong emotional state. The tiger is there when one least expects him and his existence is yet to be confirmed.
FormContent

The image forms a part of the current research of artist Sarah Browne. Referencing Katherine Hayles’ book My Mother Was a Computer, in which she asserts that we cannot have a complete understanding of digital text, unless we explore how we perceive these texts with our physical bodies, Browne is working through the relationship between technology and the female body. Her questions and propositions, in combination with the work of After April, have prompted us to think of our institution, CCA Derry~Londonderry, as an embodied someone, someone with a voice who is attempting to come to grips with what she thinks, how she feels, and what she is capable of.

If an institution is the coming together of people towards shared aims, supported by the creation of a legal entity and situated in a certain place at particular time, surely that human aspect must have a voice. It is this shared voice – that of the people, the laws, and the building – that we are exploring here. As Browne strives toward an understanding of technology that is embodied, we are working through what it might mean to be an embodied institution with a subjectivity that is something other, something more that just those people who make it run.

This image comes from the cover of a science fiction book published in Portugal in the 50s. It resonates with the promise of the future and of collective action shaping reality. Imagining and instituting tied together in an unforeseeable way.

Detail from Politiques de l’amitié (2012) by Anetta Mona Chisa & Lucia Tkacova, during the exhibition What does a drawing want? at Beirut, in Cairo 12 December 2012 – 20 January 2013. A to-be-performed sculpture of variable dimensions that involves the cutting up by hand of Jacques Derrida’s Politics of Friendship into confetti; throwing the confetti into the exhibition space carries out the sculpture.