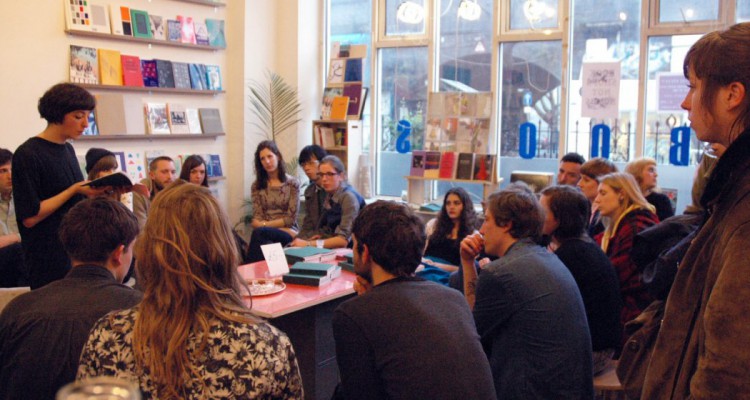 Less than a year ago, I found myself at an artist’s talk held in a well-respected, small institution in East London. I can see now how the expression ‘to find oneself’ might introduce an element of chance in the equation describing my ‘being there’ – an element, I have to admit, totally absent in the real development of the facts that followed. Actually, in all sincerity, I should confess that on that specific day I had consciously decided, planned, and accomplished my getting there on time to hear what the artist – a person I knew pretty well, a friend even – had to say about the work in relation to his experience with such institution. And not just that, but I also strategically designed my arrival bearing in mind some time to have a short chat with my friend – the artist – beforehand, and kept enough time afterwards to join the group for a drink at the local pub. I wanted the entire experience, not just part of it… and for all I knew, structuring would have been on my side.

What happened afterwards – or better, what happened during the talk – well, it could be described as revelatory, at least, or personally revolutionary, mostly if we reflect back on my preoccupations before getting there, my poor little strategy to devise time intelligently.

The panelists were supposed to sit on a wide, white table I had glimpsed at upon entering the room where the talk was to be held, but a tragi-comical incident involving a beer bottle and two microphones laying around, well, forced the organizers to opt for a more intimidating, yet simpler setting: two plastic chairs facing the audience, like black eyes on a bright forehead. The artist, my friend, well, he didn’t mind. You need more than that to undermine his intellectual and physical presence. The interviewer felt more self-conscious, yes. But you could see how the experience gained through years of strenuous work made him capable of standing there, clenching on the metal frame of the cheap seat, all focused on those half-folded pieces of paper where he had most likely recorded a scripted version of the interview I was about to witness.

The thing is… When the lights went dim and the introductory presentation by the institution’s curator was over, something quite unique happened. Something unexpected and curious, harmless, yes, and yet utterly unsettling. The conversation between the two, between my friend, the artist, and the interviewer… Well, there was no conversation really. At least not in the strict sense of a ‘give-and-take of subjects and ideas between two or more people.’ What we were there assisting was a steady, uninterrupted sequence of questions addressed by both speakers, and not just at each other. OK, yes, the interviewer would indeed address my friend with interesting, punctual questions on his work. But what he would get back in response was nothing other than another interesting and punctual question, somehow addressed not simply to him, but to all of us there, present in that room.

“Writing is to ask questions, not to answer them,” Chekhov would say. Apparently, he was and still is not the only one that thinks that way.

And soon it was as clear as day how the two men – my friend and the interviewer – were both pretty convinced that Chekhov’s remarks might have something to tell us also about the relationship between the artist and the institution, where his or her work should be produced and exhibited.

How can institutions be active in unpacking and generating a deeper understanding of both artistic and broader social interests? Both are intertwined in a way where one doesn’t undermine or overstate the other; they are not operating in parallel but, rather, are informed and performed through each other.

At which point even the institution’s curator, who until that moment, had sat quietly on the side of the large, white table, still damp with beer and covered in tissue paper, intervened with something like:

Then the interviewer goes again:

Does language form the host for works that engage with the relationship between art and fiction, art and reality, art and politics?

And even a young student that happened to sit on my right said:

How could we avoid simply representing these issues but rather making a productive step through programming, through production, through reflecting upon curating and the institution as a practice?

Her question clearly pleased the curator. I could see looks of harmony being exchanged between the two, the student and the curator. But it also pleased my friend, and the interviewer, already positively surprised with the initiative demonstrated by the first interruption, and clearly thrilled by the possibility, even remote, of an all-involved interrogative mood.

It went on for a while, not sure how long. Enough for me to feel that, when focusing on my work, I should always question myself twice. How I should remember to question my questions too!

Finally my friend, the artist, decided it was about time to think of a conclusion and went:

I will use words until the meanings clash, collide, break their structure, introduce a new logic which is not necessarily rational, but it’s not arbitrary either.
I need to create a new language…

“When the real and the parallel worlds coincide, no single particle knows whether or not itself or another particle is real or parallel. The external assessment is cancelled because they have all become internal. They’re trapped in one and the same world. A world from which one never more emerges.”

I will stay in… but my non-action is not driven by lack of concern or engagement, it’s still active as with everything else we do. We don’t have to get into it.

We are already right in the midst of it. I will carry on speaking. Is it conceivable to exhaust the possibilities of language?

Lights went on.
The talk ended.

FormContent is a non-profit organisation founded in 2007 by Francesco Pedraglio, Caterina Riva and Pieternel Vermoortel in London’s East End. After five years of intense work with more than 35 exhibition inside and outside the UK, after a rich program of performances, events, publications and commissions, FormContent decided to close its space and work on a 15-month nomadic project titled It’s moving from I to It. FormContent is directed by Francesco Pedraglio and Pieternel Vermoortel, and curated by Anca Rujoiu and Astrid Korporaal.