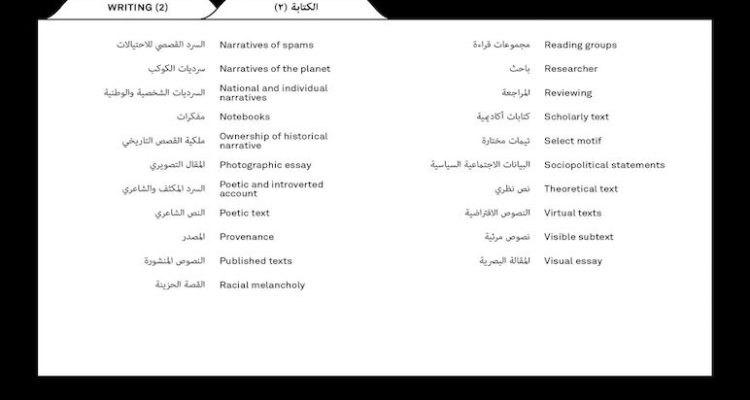 There are sentences written ten years ago that can no longer be written; things I wrote yesterday, I may have a hard time repeating today. The act of writing is tethered to its moment, a brief instant relative to the lifespan of the sentence itself. What we write may survive us, and so when writing we are obliged to deploy all the skills at our disposal to get it right. We wrestle language into arguments, agonize over single words, laboring towards a seamless overlap of sensation and syntax but often forgetting that, as we write, we too are inscribed by time. The epoch we live in has its own grammar, FBFO. Language evolves and morphs, adapting to new conditions and environments like a species determined to survive. The ebbs and flows of language, its life in flux, go undisturbed until something—an event, a rupture, a disaster—occurs and demands a new language all together.

What will you write then?

What will write you then?

Ten years ago, 290,000 people hadn’t died in Syria. The Arab world hadn’t experienced a series of revolutionary convulsions in which, for a brief moment, a radically different form of governance seemed possible. Art too was different. The Middle East mainly hosted medium-sized non-profit art institutions that emerged rather informally in the 90s (Townhouse, Ashkal Alwan, Platform Garanti). Today, the art market governs production, collectorship is in full bloom, and mastodonic museums are being built on the backs of immigrant workers (the Guggenheim Museum in Abu Dhabi). The list is long and replete with ruptures and events (some better, some worse) that make thinking and writing increasingly difficult yet entirely pressing. Events change the way we think and, consequently, what we write.

Founded in post 9/11 New York, ArteEast and its Quarterly became a witness by default, an archive of the past decade. To “support artists from the Middle East and its diasporas, raising awareness of their most talented and groundbreaking work…”, reads a colorful brochure found in our current offices (a co-working space in downtown Brooklyn). The leaflet dates back to 2004 and promotes the website alongside other ArteEast platforms and programs. The Quarterly, for example, appears as an offshoot of ArteNews, a platform established to “commission new articles and translate hard-to-find articles and essays from Arabic, Farsi, French, Turkish into English”. Later on, the Quarterly took on the name “ArteZine”.

Institutional histories are a trail of miscellaneous appellations, tags, and wordings that reflect the morphology of an organization’s curatorial leanings. In the case of the Quarterly: cinema critic and curator (and former Curator and Artistic Director of ArteEast) Rasha Salti’s engagement with Arab cinema; Barrak Alzaid’s interest in the body and affect; Ipek Ulusoy’s endeavor to connect distant geographies. These narratives mark specific turns in the archive, clusters of discourse notching the tenure of each editor.

Rather than picking up on past threads, this retrospective issue looks at the archive as a document of language, unfurling a diverse range of academic texts, essays, interviews, and notes. The texts gathered in this issue question art historical language, revisit institutional jargon, and challenge the boundaries of art criticism. They reflect on language as a cultural and ideological construct as well as a medium for rupture and experimentation.

Told from the shores of Alamein, Nida Ghouse’s poetic Don’t Drink the Sea Water ponders the sea as an archive of its own violence (Winter 2013, guest edited by Barrak Alzaid). Haytham el Wardany’s Benjaminian fragments, Notes on Disaster, present a new language for catastrophe (Winter 2015, guest edited by Lara Khaldi and Yazan Khalili). Kirsten Scheid looks at the language of press reviews for her study of the reception and legacy of Lebanese painter Saloua Raouda Choucair. Rasha Salti’s gripping interview with Syrian filmmaker Omar Amiralay is a priceless conversation on the beginnings of Nadi al-Sinama, a ciné-club founded in 1952 in Damascus (Spring 2008, edited by Rasha Salti and Daikha Dridi). In Autonomy Teller Machine, the former Cairo-based space Beirut tackles the relationship between language, institution, and power. How does an institution speak? (Summer 2013, guest edited by Beirut). Echoing the way narratives are written, Brian Rogers’ essay takes inspiration from Benedict Singleton’s thinking on plots to discuss the short-lived and immersive print journal Abstract Culture (Summer 2014, guest edited by Ghalya Saadawi and Hisham Awad).

The texts strung together in this issue are extracted from their original sites of publication, severed from their relationship to other texts and editorial intentions. A text inhabits multiple lives in a retrospective publication. Time introduces unexpected and unintended meanings (time writes us). Our task as readers is to preserve these layers, to resist scraping off past meanings for new ones, to sustain simultaneous readings of a same text, and to let go of an authorial agency we barely had in the first place.