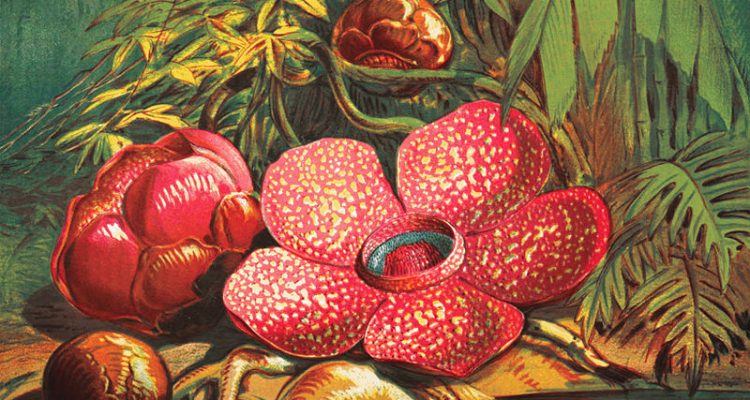 What does war smell like? In response to this question, Reddit member STR8_Shooter remembers Afghanistan as smelling of feces, gunpowder and explosives, adding: “Then you occasionally have wounded, or dead, which is [a] weird smell you can’t really describe, but you immediately know it when you smell it.”[1]

It is this indescribable but unforgettable smell that the Rafflesia arnoldii mimics when in bloom and that lends it the common name ‘Corpse Flower.’[2] It is also this smell – and the Rafflesia arnoldii – that discursively and materially link two stories: the first of an exhibition at the American Museum of Natural History and the second of situational training exercises at US military bases.

Native to the tropical rainforests of Southeast Asia, Rafflesia arnoldii is characterized by a five petal flower that has no roots, stems, shoots, or leaves; this parasitic plant roots in vines of the genus Tetrastigma through thread-like filaments that siphon nutrients and water from its host.[3] Entirely dependent on Tetrastigma, Rafflesia arnoldii does not photosynthesize and appears to have lost the responsible chloroplast genome; perpetuating this asymmetrical relationship by weakening Tetrastigma’s resistance, some speculate, is Rafflesia arnoldii’s horizontal transfer of genetic material to its host.[4] At flowering time, Rafflesia arnoldii bursts forth from the Tetrastigma vine, and its flower grows to gargantuan proportions of up to one meter in diameter.[5] In open state, sanguine petals speckled with cream-colored warts reveal a deeply recessed central floral chamber, housing a disc that supports protruding spines.

But Rafflesia arnoldii’s fetid odor is not a mere curiosity; along with the flower’s reddish-brown color and leathery texture, the odor imparts the illusion of decaying meat and attracts carrion flies that feed on or lay eggs in carcasses.[6] Carrion flies in turn act as pollinators, connecting pollen-bearing male flowers to seed-bearing female ones.[7] In popular imaginaries these qualities have garnered the ‘Corpse Flower’ descriptors like ‘eerie,’ ‘ghoulish,’ ‘bizarre,’ and ‘as if from outer space,’ its parasitism likened to Invasion of the Body Snatchers.[8] The latter invokes the Invasion of the Body Snatchers films (1956, 1978) adapted from Jack Finney’s 1955 science fiction novel and conjures the genre of plant horror to which these belong. Plant physiognomy has long provided fodder for the role of plants as on-screen monster-invaders; after all, plants are both tenaciously committed to the “all-consuming tasks of growth and the production of new members of the species” and can grow limitlessly given their undefined morphology.[9] In Invasion of the Body Snatchers plants’ ‘survivalism’ turns sinister as a Californian town gets overtaken by enormous alien seedpods; the pods spawn copies of their townsfolk hosts and replace them with lifeless ‘pod people.’[10]

Rafflesia arnoldii’s own spectacular ‘survivalism’ led to its inclusion in the 2015 AMNH exhibition “Life at the Limits: Stories of Amazing Species.” “Life at the Limits” presented animal and plant species that “find food, fend off predators, reproduce, and thrive in habitats many would find inhospitable, even lethal.”[11]  A gigantic model of a single Rafflesia arnoldii hovered above an information panel on “Uncanny Eaters,” among which included the Black Swallower, Mantis Shrimp, and Cookiecutter Shark.[12] At a station nearby, a canister containing a fragrant oil cartridge served to evoke the ‘Corpse Flower’s stench. Installation view of “Life at its Limits: Stories of Amazing Species” (2015) at the AMNH
(Image courtesy of Chanwook Min)

ScentAir has been developing scents and scent delivery systems for the US military – including the Marine Corps, Navy, and Air Force – since at least 2003.[16] These are employed in situational training exercises at Combined Arms Collective Training Facilities (CACTFs), found on most major US bases. CACTFs are mock urban environments (often stylized like Middle Eastern cities) replete with building structures, streets, and subterranean tunnels. Audio and scent delivery systems are distributed onsite and managed from a control center so as to recreate battlefield smells and sounds. CACTFs are also equipped with video cameras to record training exercises for performance enhancement through After Action Review.[17]

CACTFs prepare soldiers for Military Operations in Urban Terrain (MOUT) – an increasingly common type of warfare involving small units embedded in messy densely populated environments and necessitating instantaneous critical decision-making independent of central command.[18] Uninitiated soldiers can be disarmed and distracted by unfamiliar battlefield smells the reasoning goes. Simulations therefore aim to expose soldiers-in-training to chemically engineered odors similar to those they can expect to encounter on the ground; they also train them to recognize olfactory cues of danger or enemy presence.[19]

Technological innovations in scented media largely date back to the late 1950s and, as with many media technologies taken up by the military, have roots in the entertainment industry.[20] Early scented media experiments aimed to engross viewers by enhancing the immersive experience of mediated scenes.[21] Among these were: the AromaRama, a scent-distribution system that utilized theaters’ central air-conditioning and was first used at screenings of Behind the Great Wall (1959); Smell-O-Vision, an individualized scent distribution system that was placed under each theater seat and used in the screening of the specially-made Scent of a Mystery (1959); and Sensorama, an immersive 3D arcade video game of a motorbike ride with fans, vibrating seats, and odors from 1962.[22] While AromaRama and Smell-O-Vision were critical and commercial flops as viewers complained of smells’ intermingling and artificiality, Sensorama failed to secure funding and vanished altogether.[23] Glitches in scented media experiments like these are now being refined with military funding and for military use.[24]

About a decade after scented media’s take off, natural history museums in the US gravitated towards multi-sensory interactive displays. This shift emerged from increasing disinterest in static dioramas and natural history’s eclipse in importance and relevance by laboratory science;[25] it marked a new approach to exhibition-making heralded by physicist Frank Oppenheimer’s “Exploratorium,” a science center that combined “informal learning” with “hands-on experience.”[26] At the “Exploratorium,” exhibits were set up like laboratories and visitors learned by maneuvering props and performing mini-experiments. On interactivity, Oppenheimer noted: “Explaining science and technology without props can resemble an attempt to tell what it is like to swim without ever letting a person near the water.”[27] Then in the 1980s, budget cuts and the turn to corporate sponsorship drove another shift heralded as the era of “edutainment,” a generally commercially-driven amalgam of education and entertainment. Subsequently, museums of science and nature “increasingly shared… loud, colorful, and heavily publicized traveling exhibitions,” “sources of funding,” and “pedagogical strategies,”[28] including modes of interactivity.

The leveraging of smell has been part of this interactivity trend. “Life at the Limits” was not the first or only special exhibition the AMNH used odor for. “Beyond Planet Earth: The Future of Space Exploration” (2011-2012) featured a moon rock display accompanied by the smell of gunpowder. Nor is the AMNH the only natural history museum to draw on odor. In 2001, the Natural History Museum in London gave its Tyrannosaurus Rex robot a scented breath, opting for “Maastrichtian miasma” in lieu of a closer-to-life rotting flesh smell that was deemed too revolting.[29]

Though not entirely identical, formulations of smell’s effectiveness in museum displays and in military training bear striking resemblances. Beyond its effect of establishing “phenomenological proximity,”[30] the olfactory’s significance is articulated in terms of the anatomically privileged link between the nose and personal memory and emotion.[31] Odor cues generally produce more vivid memories with longer recall, trigger strong emotional responses like fear and disgust, and subconsciously orient sniffing subjects.[32] For museums, this means smells can leave visitors with lingering visceral impressions and heightened emotional states that feed off of the display’s content and reinforce its lessons.[33] For military training, this translates into behavioral conditioning that subconsciously instills instructed responses and desensitizes instructees through repeated exposure.[34]

The entanglement of Rafflesia arnoldii’s mediated odor at the AMNH with the mediation of battlefield smells at CACTFs provokes a number of questions. What does it mean when the same technology used in an exhibition on “Life at the Limits” is that used to transgress and extend the limitations of actual lives? That the same means and networks of production mediate nature and the war dead? Condition museum-goers and soldiers? What imaginaries do these simulations draw on? Of lethality? Of survival? Of survival amidst lethality? How are soldiers and nature, museum publics and war casualties, being remade via the simulation of shared smells?[35]

[8] Remy Melina. “Naughty by Nature: The World’s Most Disgusting and Deadly Flowers.” Live Science. 10 May 2011. www.livescience.com/33265-most-disgusting-deadly-flowers.html

[11] “Life at the Limits: About the Exhibition.” American Museum of Natural History. www.amnh.org/exhibitions/life-at-the-limits/about-the-exhibition

[26] Karen A Radar and Victoria E.M. Cain. Life on Display: Revolutionizing US Museums of Science and Natural History in the Twentieth Century. Chicago: University of Chicago, 2014. 209-210.