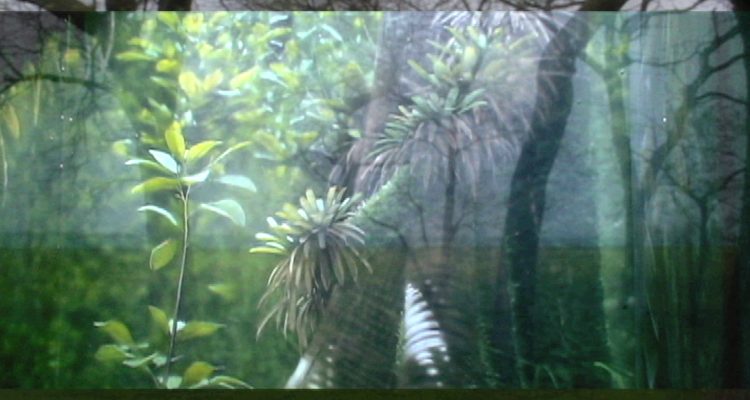 “On a day as any other day, all of our memories would become significant only in retrospect, our first memory was marked by the day setting off to start with the worst of all evils.”—We Began by Measuring Distance (2009)

I read while standing in front of We Began by Measuring Distance, a video work by artist and filmmaker Basma Alsharif presented at the New Museum’s Here and Elsewhere exhibition— a contentious and comprehensive survey of contemporary art from the Arab world.[1]

I watched the video twice in one sitting that day. The work opens with various seductive images of rapidly shifting skies to a soundtrack of the muffled voice of a woman in the distance crying and screaming, “Father, father, father, my father, shoot him.” An image of veiled women and barefoot children sitting on an unidentified city street follows. Images are overlaid with text spoken by a deep-voiced, authorial narrator who reveals that the title of the work refers to a game of measurements invented by an unidentified group of people in order to fill up their time and fight boredom. Measurements of shapes and objects such as circles and apples add up to distances between two points, and then, to distances between cities, like Rome and Geneva, and Gaza and Jerusalem, a number which is hauntingly repeated many times over.

An inescapable feeling of nostalgia rises to the surface of Alsharif’s explorations with poetic and textual spaces, which reveals that it might be more productive to propose questions rather than make statements. The artist’s work can’t be associated with a specific time and place; it engages with complex and evasive spaces where stories can’t quite be grasped, where history is subjective and intangible, images are not transparent, characters remain anonymous, and any notion of the real is simultaneously charged and contested. As the distances within shapes and political landscapes collapse and merge, the viewer is left with eerie sounds and long film cuts that reveal a persistent longing. Alsharif’s experimental documentary format dissects reality rather than straightforwardly represents it. It provides space for the political as a site of investigation that does not resemble the more defined parameters of candid documentary reproductions. As Alsharif clarified, she is not interested in making political works engaged only in conflict, nor in being identified as an activist Palestinian artist.[2] She is known as a maker who deals with the human condition in relation to both place and non-place.

Alsharif is invested in the experience of reinterpreting traumatic events repeatedly to reveal things that can’t be communicated, following the logic of philosopher Gilles Deleuze who restates, “one ousts because one repeats,” meaning that repetition in fact allows for new meanings to be created by eliminating what is retained in one’s memory.[3] Repetition is not used to bring the story forward, but rather it is employed because the story is too harrowing to be communicated otherwise. Time and again, Alsharif’s considered tales of exile question the role of memory in defining the historical and personal event and in negotiating relations between reality and constructed truth. In fixating on the passage and dissolution of time and placing the body in constant movement, the artist’s works distance the viewer from understanding any concept of a single locale. The moment any specificity is revealed, Alsharif makes sure it is vacated; she desires to immerse herself and others within a trance composed of a perpetual oscillation of time, and defined by a lack of any marked temporal or spatial sense as well as the absence of a reliable narrator. Any form of understanding or revelation happens only when under the influence. Soon after I found out that Alsharif had relocated to Los Angeles where I had also recently returned to after living in Beirut, she and I started working together on several projects. The artist’s multidisciplinary practice, which engages in fictionalized autobiography through film, photography, sound, and text, is indeed driven by her nomadic lifestyle and the many places she’s lived in, worked, and passed through, including Amman, Sharjah, Palestine, Beirut, Cairo, Paris, and, most recently, Los Angeles. As a Kuwaiti-born Palestinian artist, however, she is most connected to Palestine. The documentary-style video work Home Movies Gaza (2013), partially filmed from the window of a fast-moving car heading south, is a candid depiction of Gaza’s changing landscape and its everyday happenings, heavily manipulated through reversals, loops, layering, and special effects — strategies commonly employed in Alsharif’s practice. Although we never see the artist, the camera serves as a witness to pixelated televisions left on in empty homes, radio reports of Gaza’s declining health conditions, and animals surviving in abandoned, hyperreal environments manipulated by the artist. The repercussions of the war and ongoing violence are reflected in the blurred landscape and everyday scenes. Where does one look for visual traces to construct some kind of historical truth?

“The first rhythm that they became used to was the slow swing from dawn to quick dusk. They accepted the pleasure of morning, the bright sun, the whelming sea, and sweet air, as a time when play was good and life so full that hope was necessary and therefore forgotten…”—Home Movies Gaza (2013)

Alsharif is more interested in the possibilities of overcoming conflict than in the definition of conflict. Carefully listening to the rhythms and sounds, and studying the contours and crevices of spaces that exist in the face of catastrophic conflicts, Alsharif slows down and speeds up the filmic action. She also focuses on domestic stillness to depict certain truths: time passes and lives still go on, even while the strife continues. She takes into account the violence from all angles and speeds to consider how things might look differently and perform differently when they materialize at different registers, and to allow viewers to see and make sense of the moving images themselves. Hyperreality is engaged with as an alternative to a social consciousness that cannot be penetrated because of its media-saturated landscapes and realities. It is within these spaces that she invites her audience to ask, how can we go on? More specifically, she considers how individuals and society can keep moving forward in the wake of disaster.

Deep Sleep, Alsharif’s 2014 dreamlike video reflects on Gaza from three different locations. Filmed in the abandoned and ruinous sites of Malta, Athens, and Gaza, the work connects the three locations and attempts to convey the experience of being in Gaza from these monumental sites. Colorful flickering lights, sun, earth, stone, rock, sky, and water inundate the scenes, and the rhythmic sounds of waves, chimes, howls, and footsteps remain. Alsharif appears in the work in the form of her subconscious. Simultaneously playing performer, documentarian, and producer, as well as artist and archeologist, she calls attention to the elements of the film and how it began. The artist, who underwent yearlong autohypnosis sessions, filmed this work while in a trance state. Appearing in the video as her own double, dressed in a haunting all-white outfit, she traverses carefully through indistinct ruins, holding a recording device that captures her every movement. Later we see the artist holding her finger up to the scene, urging us to look even closer. Void of text, the meditative shots inveigle the viewer into these multiple and mythical sites and temporalities, where time and context dissolve.

Affected by her own familial and personal relationship to Palestine, Alsharif attempts to maneuver and sensorially divert viewers to remotely engage them in Gaza. Considering bilocation strategies for immersive spectatorship, she creates room for others to occupy her own position and reflect on trauma. At the same time, by appearing as the only performer in Deep Sleep and by destabilizing any notion of time and place, Alsharif reminds them that it is not their own position, and that they have not experienced it firsthand. The viewer is ushered to the ambiguous spaces between hypnosis, fantasy, and reality. Gaza is imagined and reimagined, and chronological history is thrown into question, as the past, present, and future are never made certain. Many things have simultaneously unraveled, including the artist’s and viewer’s subjectivity, and a struggle to uncover certain realities. As the moving image arrests our attention, it simultaneously grants the opportunity to consider how civilizations form and endure and how they are destroyed over time. The work asks: What remains after the dissolution? What does it say about the human state of affairs when information is malleable and those in power are allowed to represent and write history? Furthermore, where does one civilization end and the next begin, and what kind of future imaginaries are possible even after the destruction? Those watching Alsharif’s works may even be left with the awareness that within the political and economic turmoil of prolonged wars, crashes, and global disasters, increased uncertainty is determinedly yet to come.

Alsharif’s works are neither here nor there; they evoke a longing for a home that might never be resolved or might have never existed. Simultaneously, the works traverse far and wide to better grasp how one can arrive at an understanding of a complicated place embroiled with political upheaval and invent ways to exist there. The cinematic experience grants the space to immerse in Alsharif’s narratives, as she invites her audience to engage with her and to see differently. Works portray a constant state of movement in both a local context and a non-place, one that is indecipherable and ever-shifting, conveying the artist’s complicated relationship to speaking about a place that is eternally unreachable. Along the way, everyday occurrences—games, passages, dreams, references, and stories of displacement—are captured and manipulated in order to challenge how we perceive what we know, what we don’t know, what we don’t want to know, and what we can’t yet quite see.

Basma Alsharif is an artist/filmmaker born in Kuwait to Palestinian parents, raised between France and the US. Since receiving a Master of Fine Arts in 2007 from the University of Illinois at Chicago, she developed her practice nomadically between Chicago, Cairo, Beirut, Sharjah, Amman, the Gaza Strip and Paris. Basma’s work centers on the human condition in relation to shifting geopolitical landscapes, natural environments, and history. Interested in what cannot ever be proven or explained, she uses photography, film, video, sound, language and performance to reveal the fallibility of our perception and of history.

Major exhibitions include: Le Prix Découverte des Rencontres d’Arles, les Module at the Palais de Tokyo, Here and Elsewhere at the New Museum, the Jerusalem Show, Yamagata Documentary Film Festival, the Berlinale, the Sharjah Biennial, Videobrasil, and Manifesta 8. She received a jury prize at the Sharjah Biennial 9, the Marion MacMahon award at Images, and was awarded the Marcelino Botin Visual Arts grant. Basma is represented by Galerie Imane Farés in Paris, distributed by Video Data Bank and Arsenal, and is now based in Los Angeles.