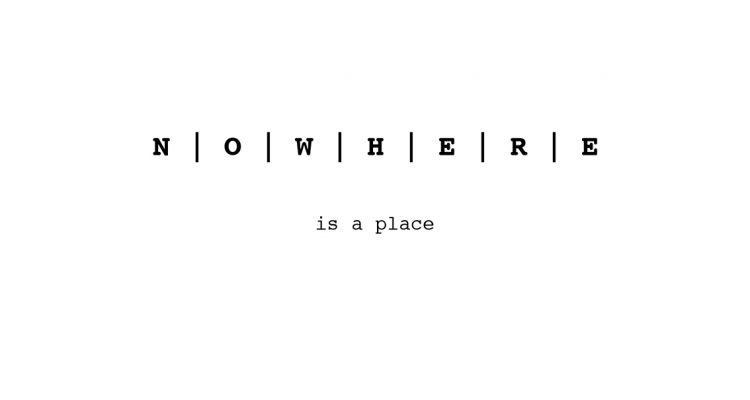 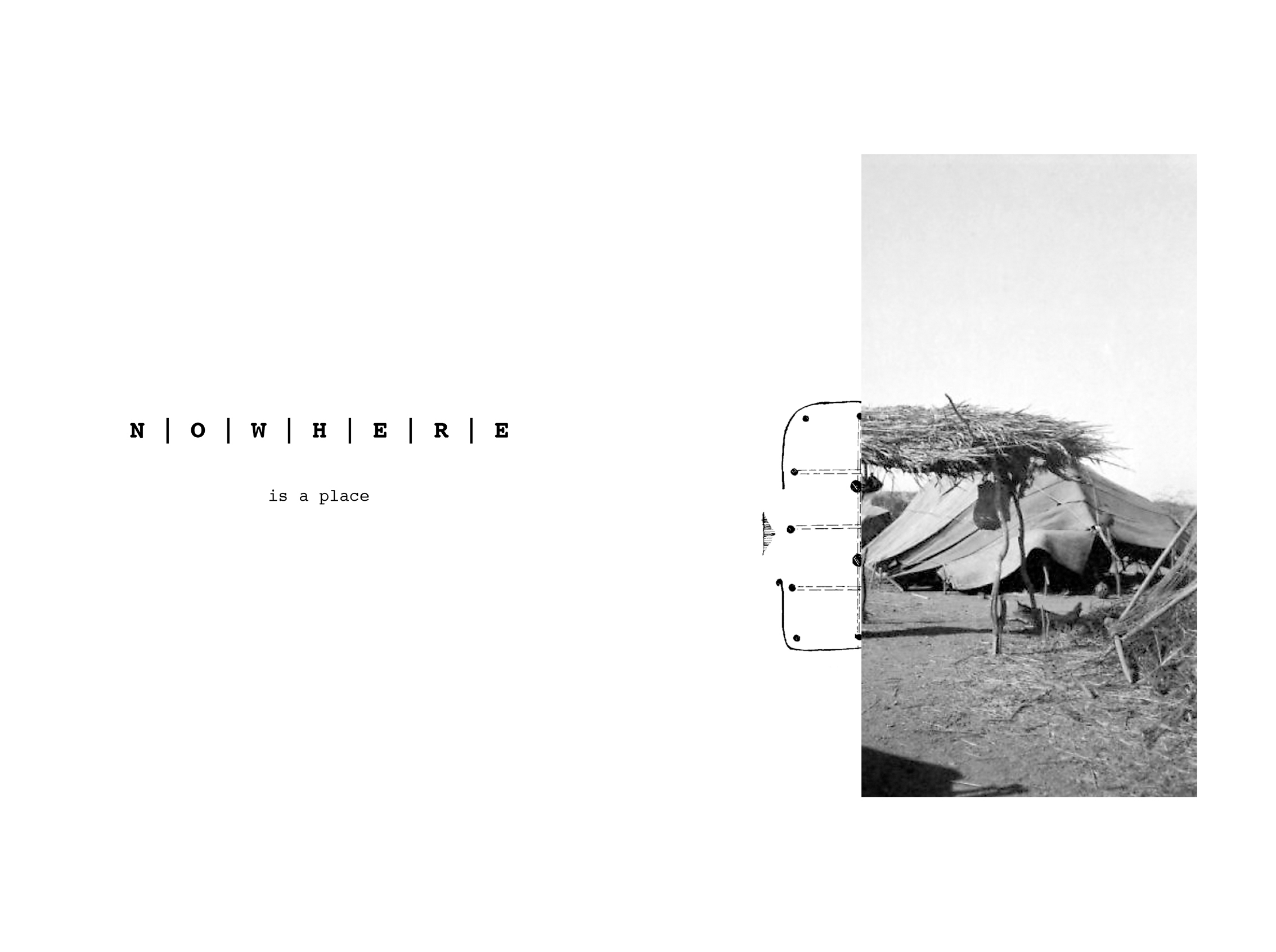 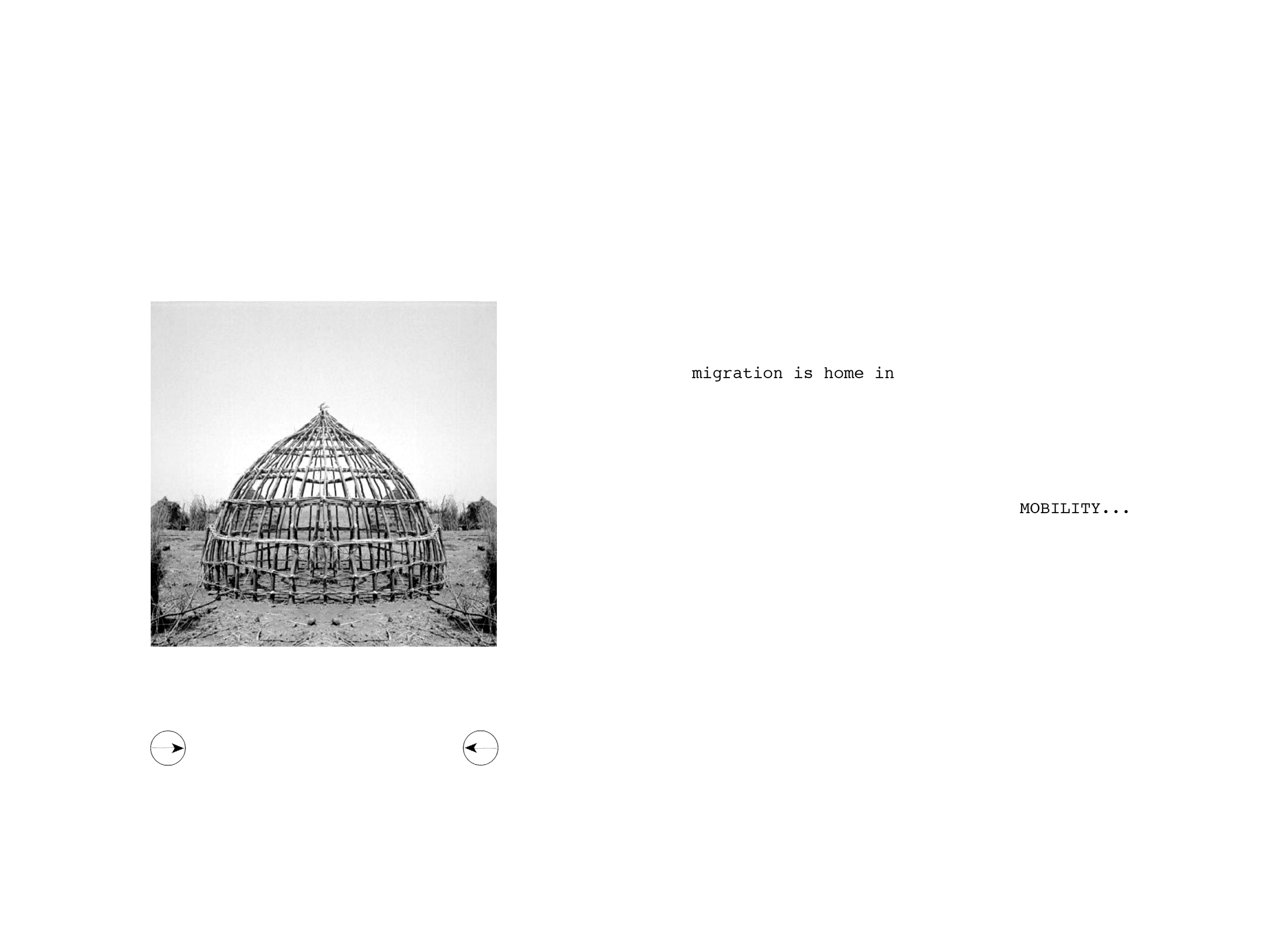 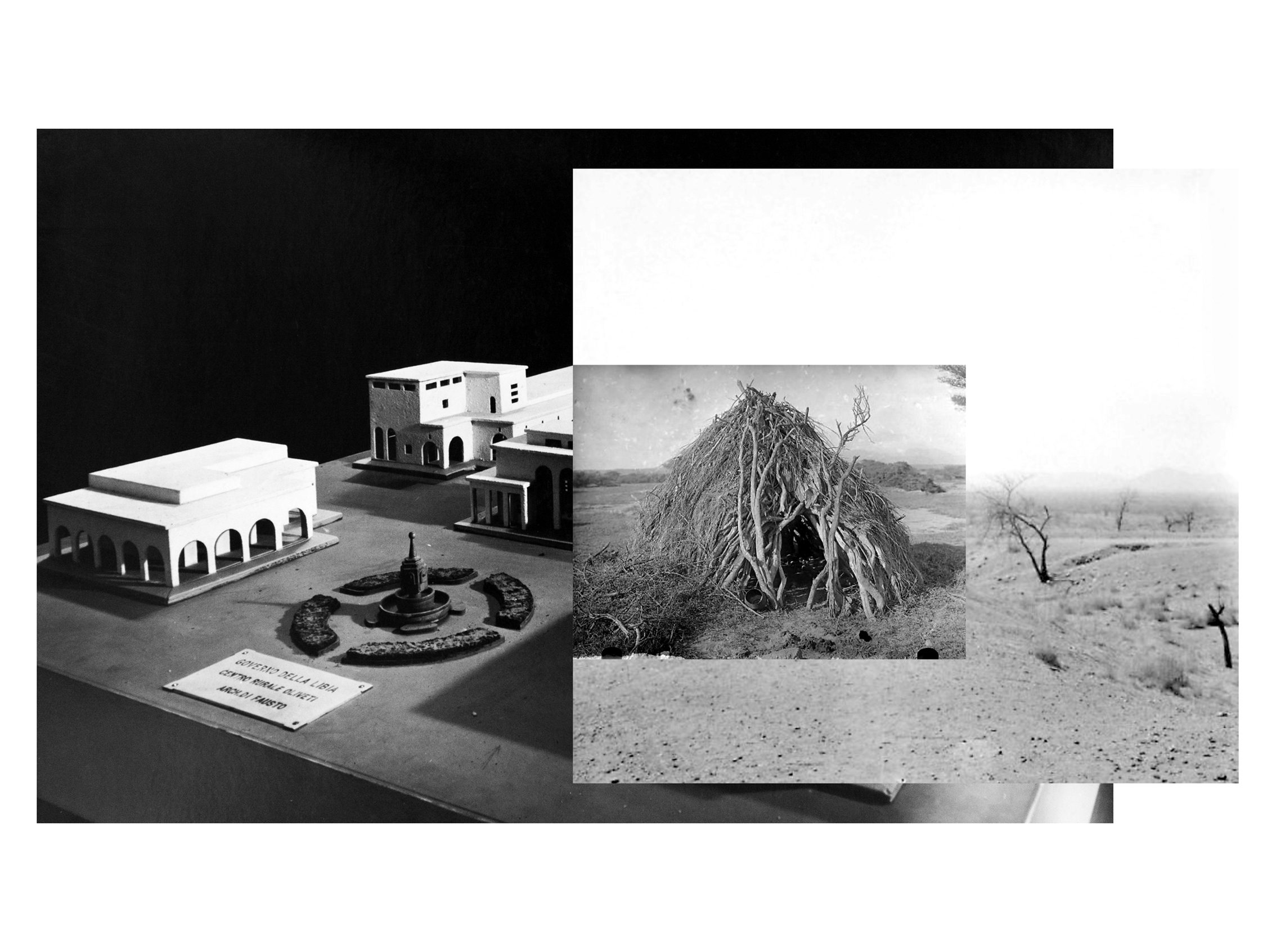 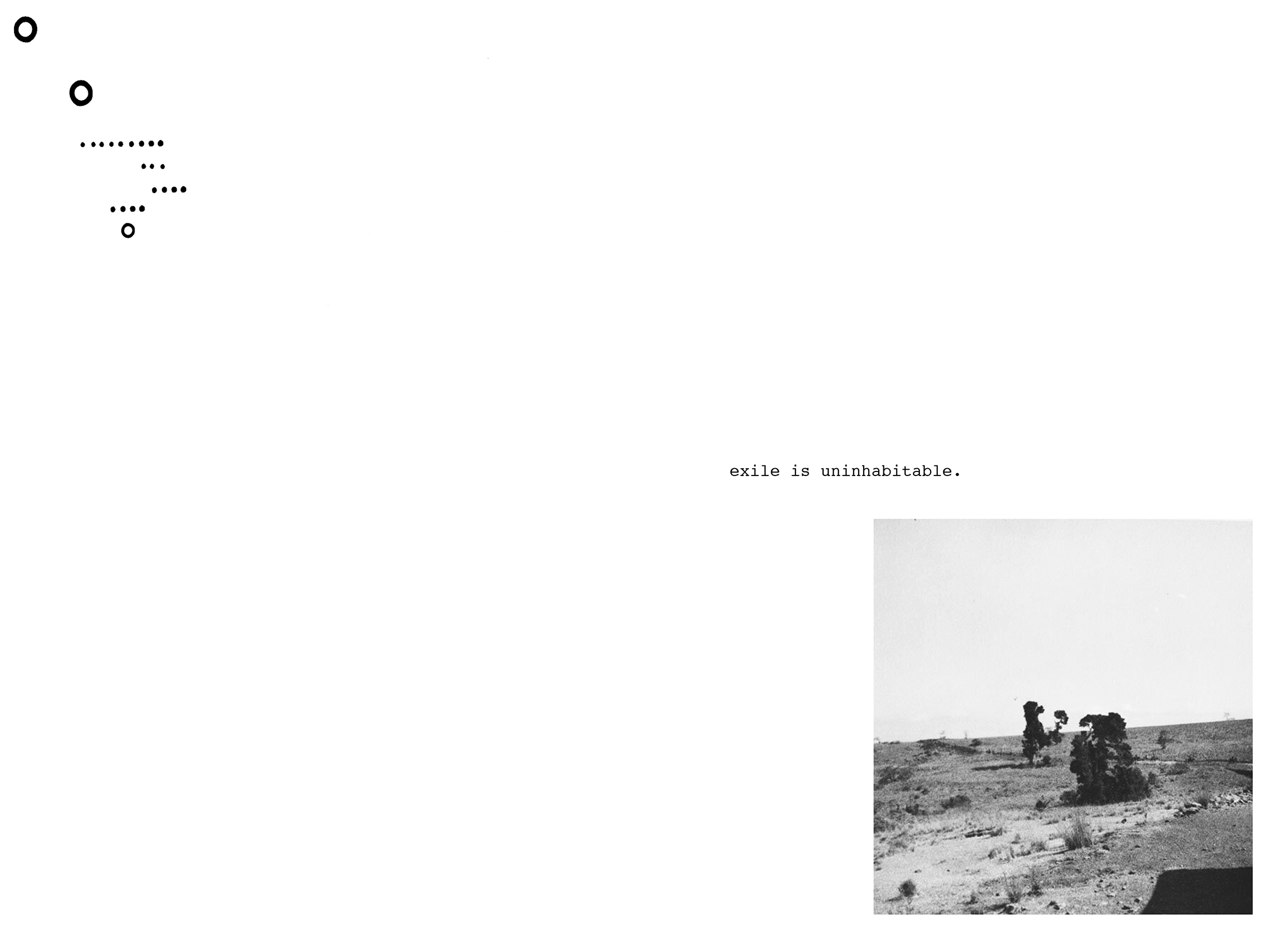 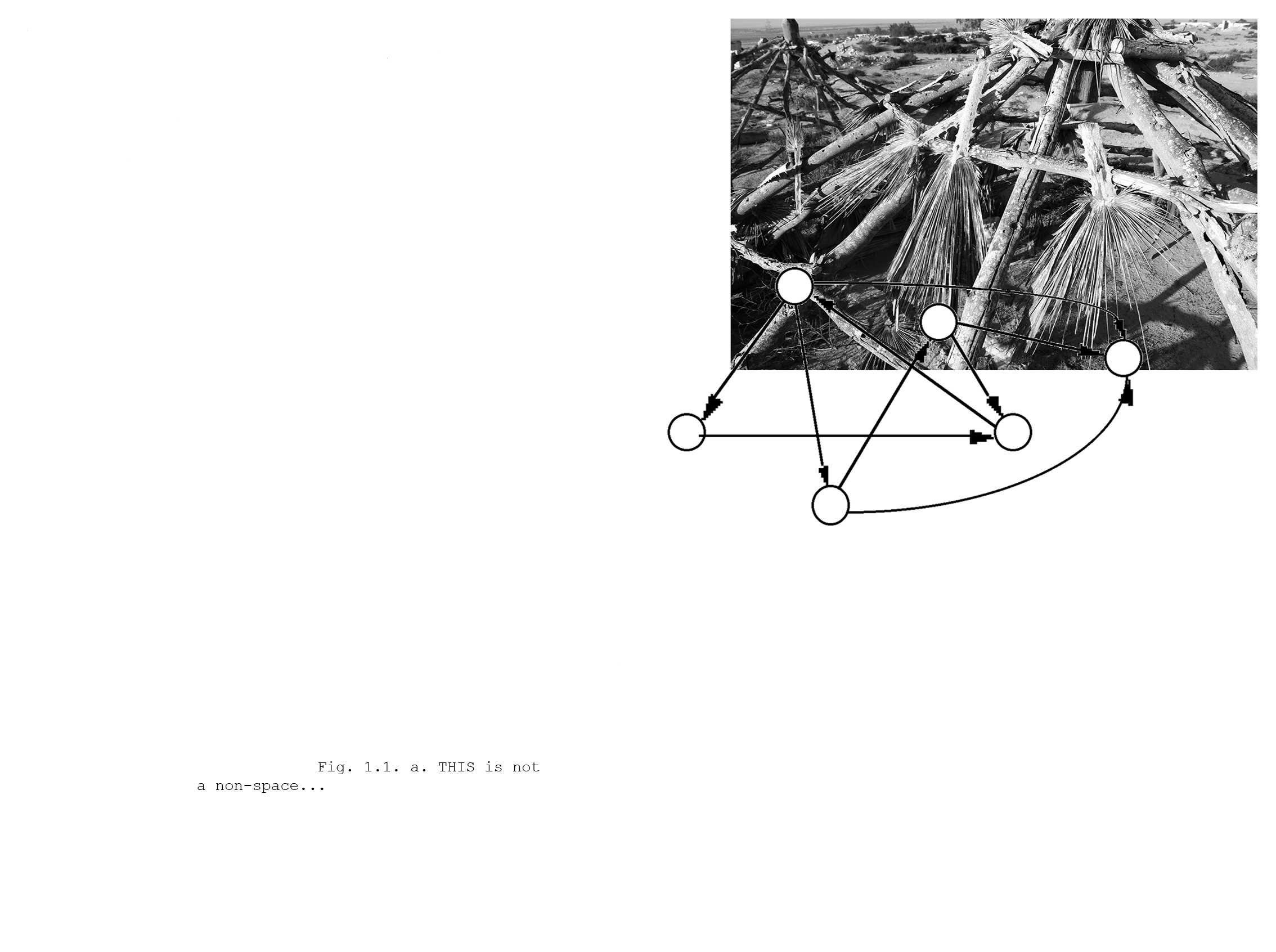 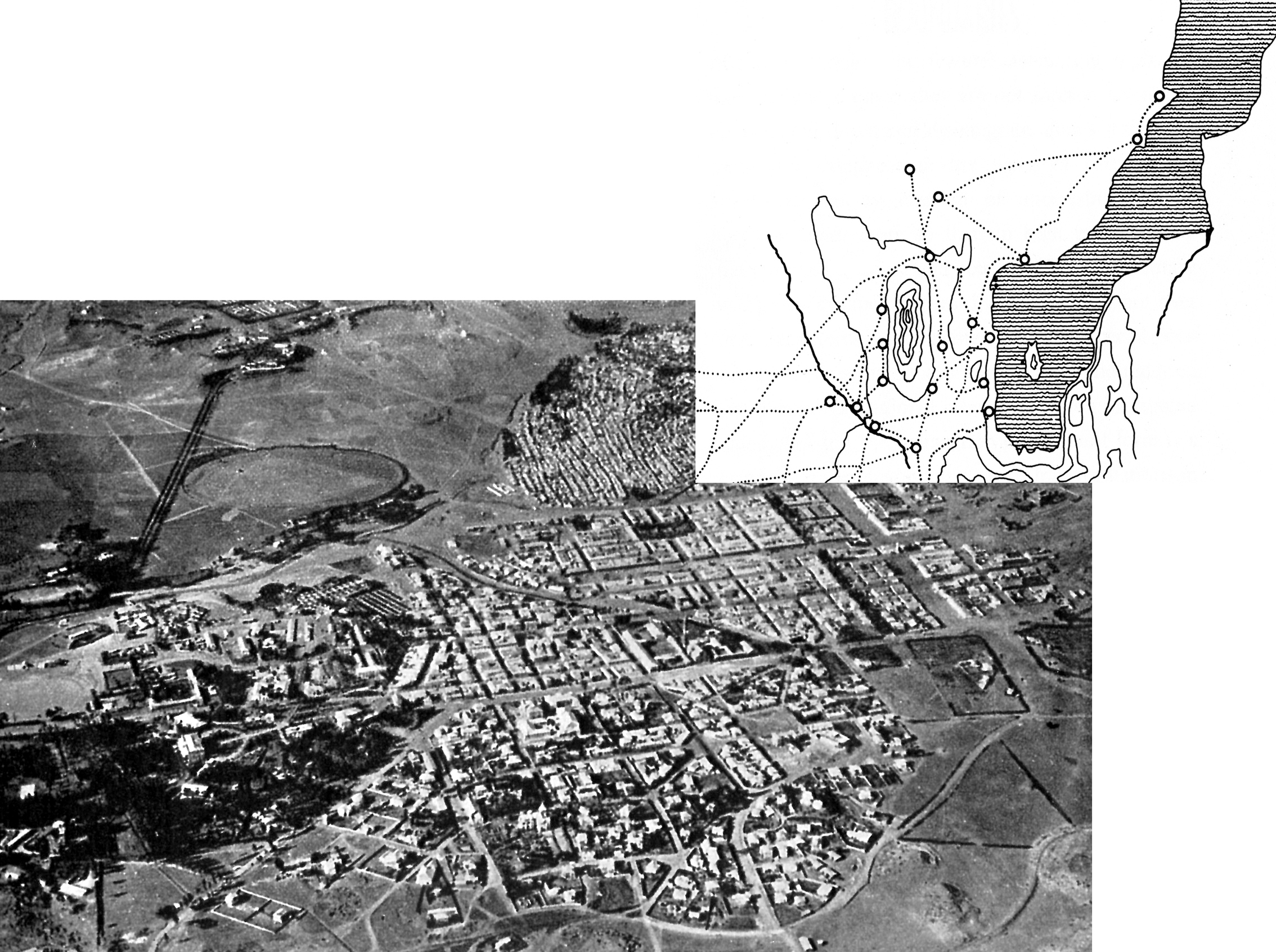 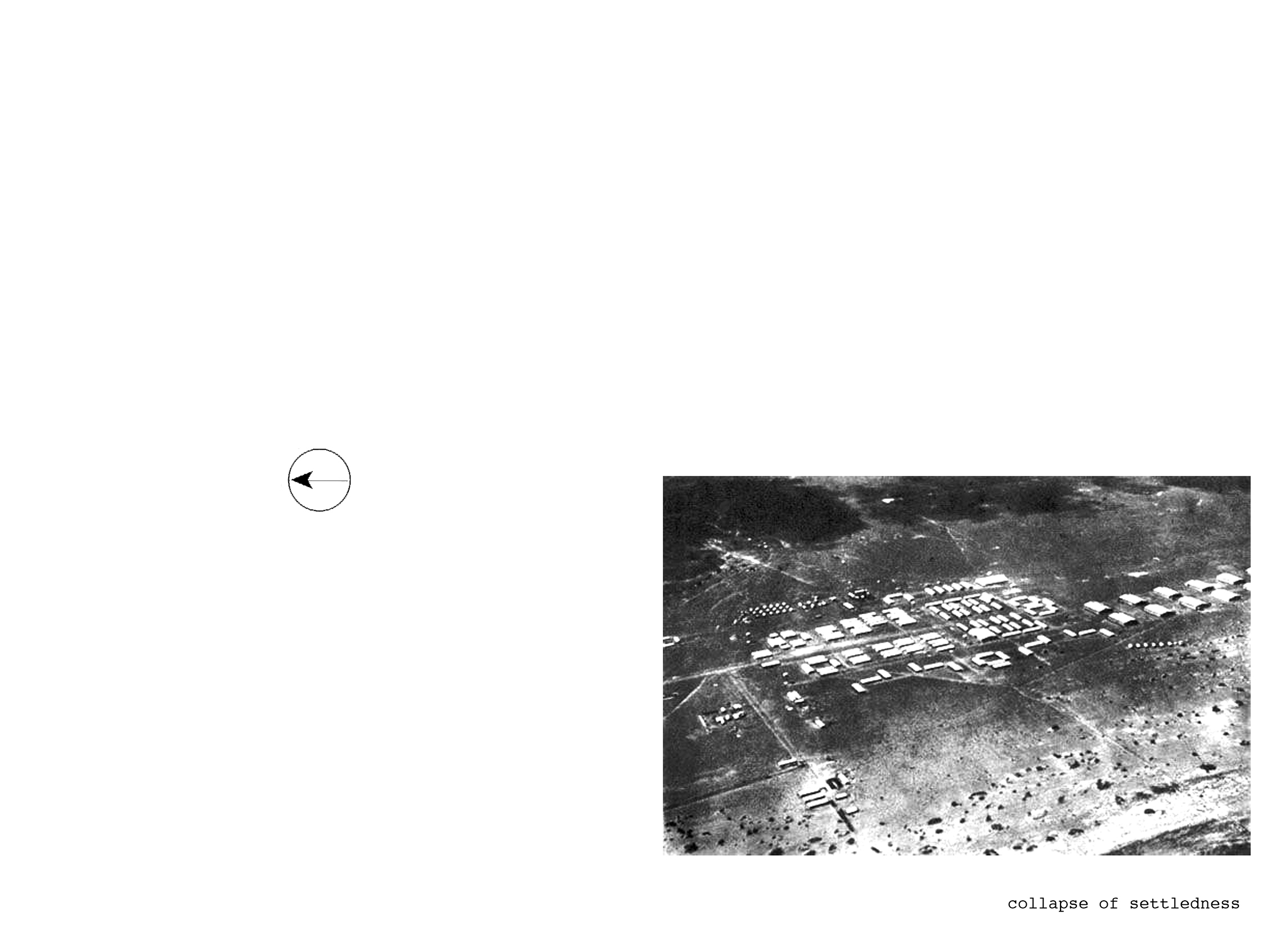 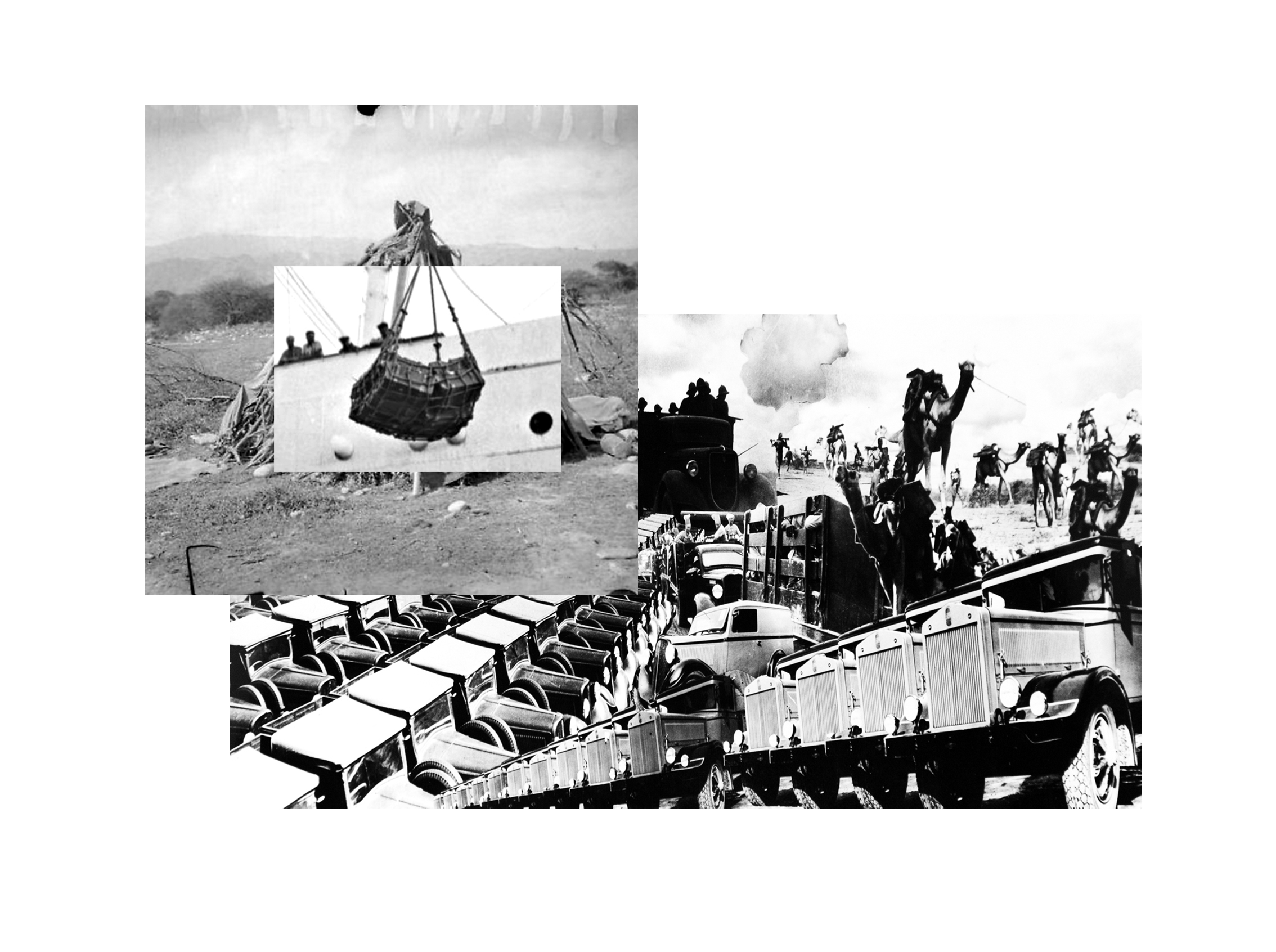 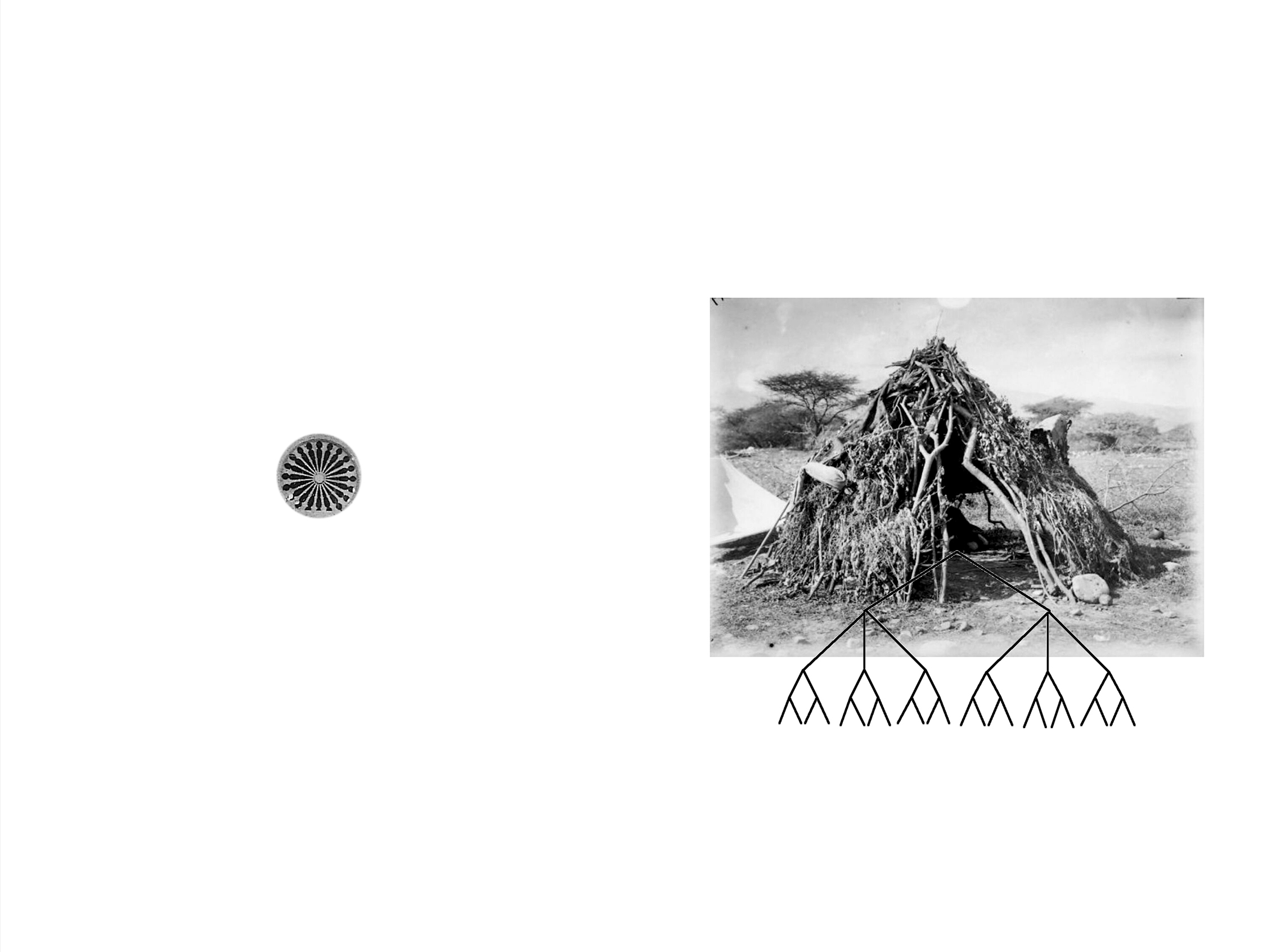 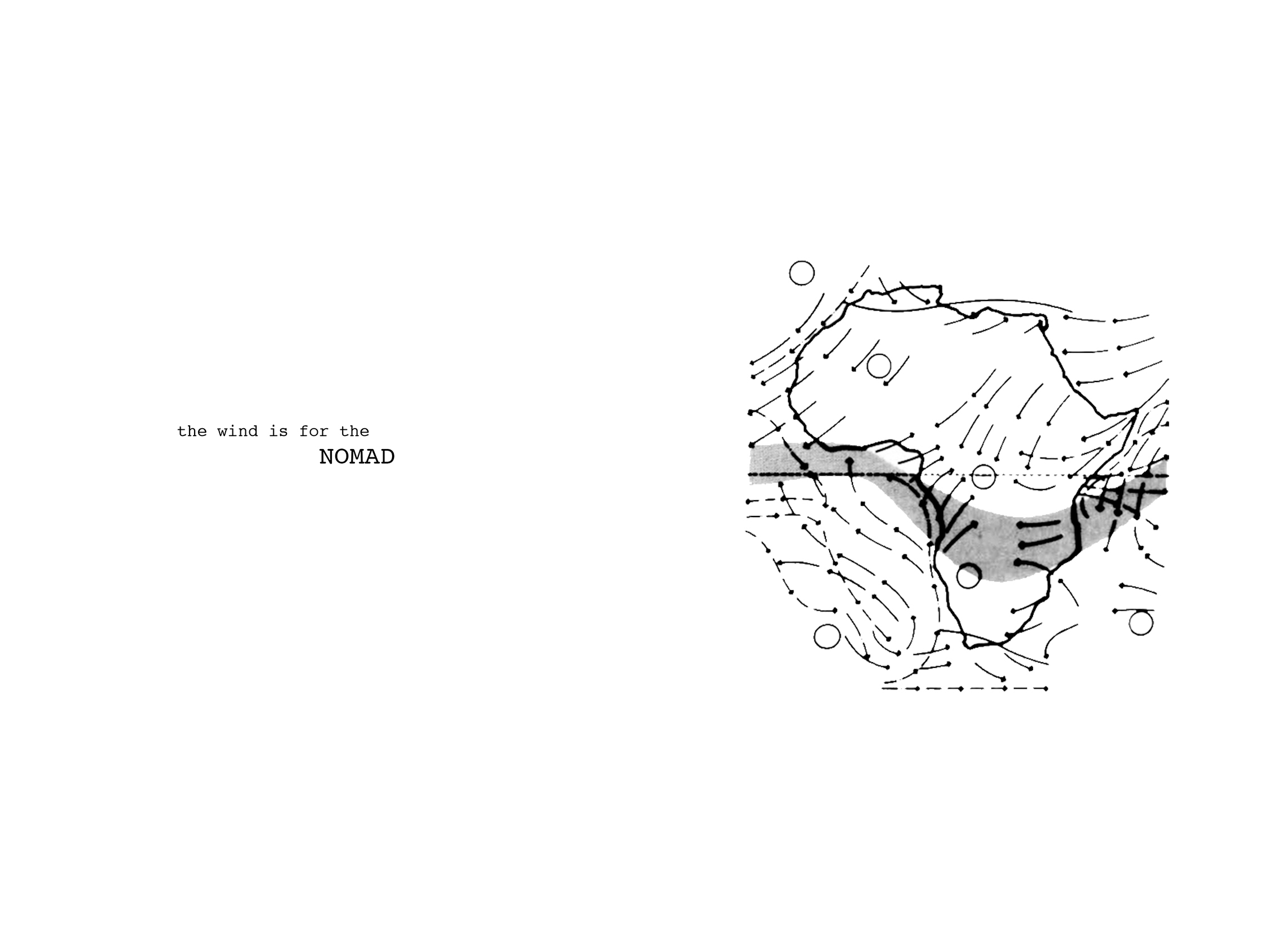 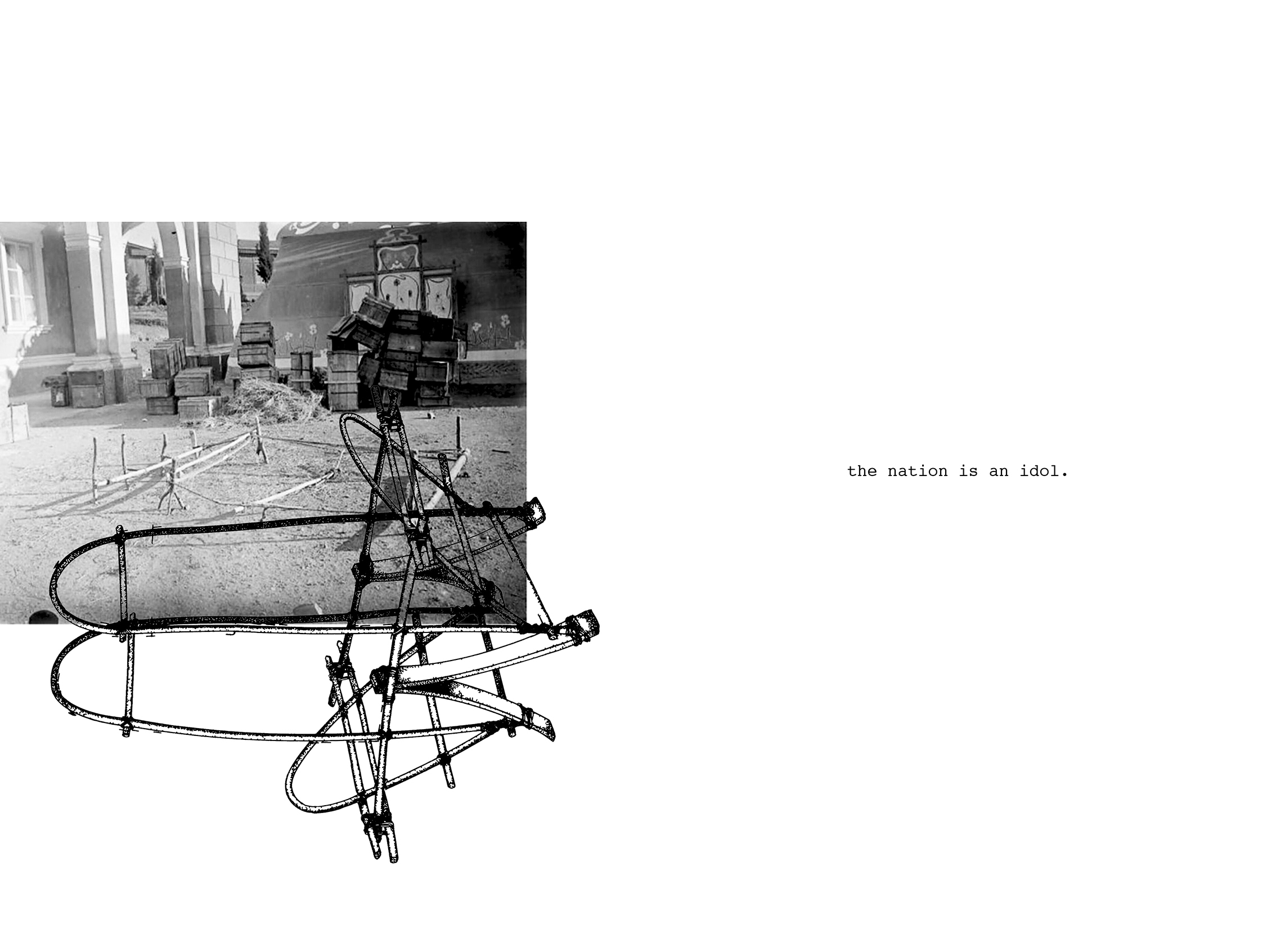 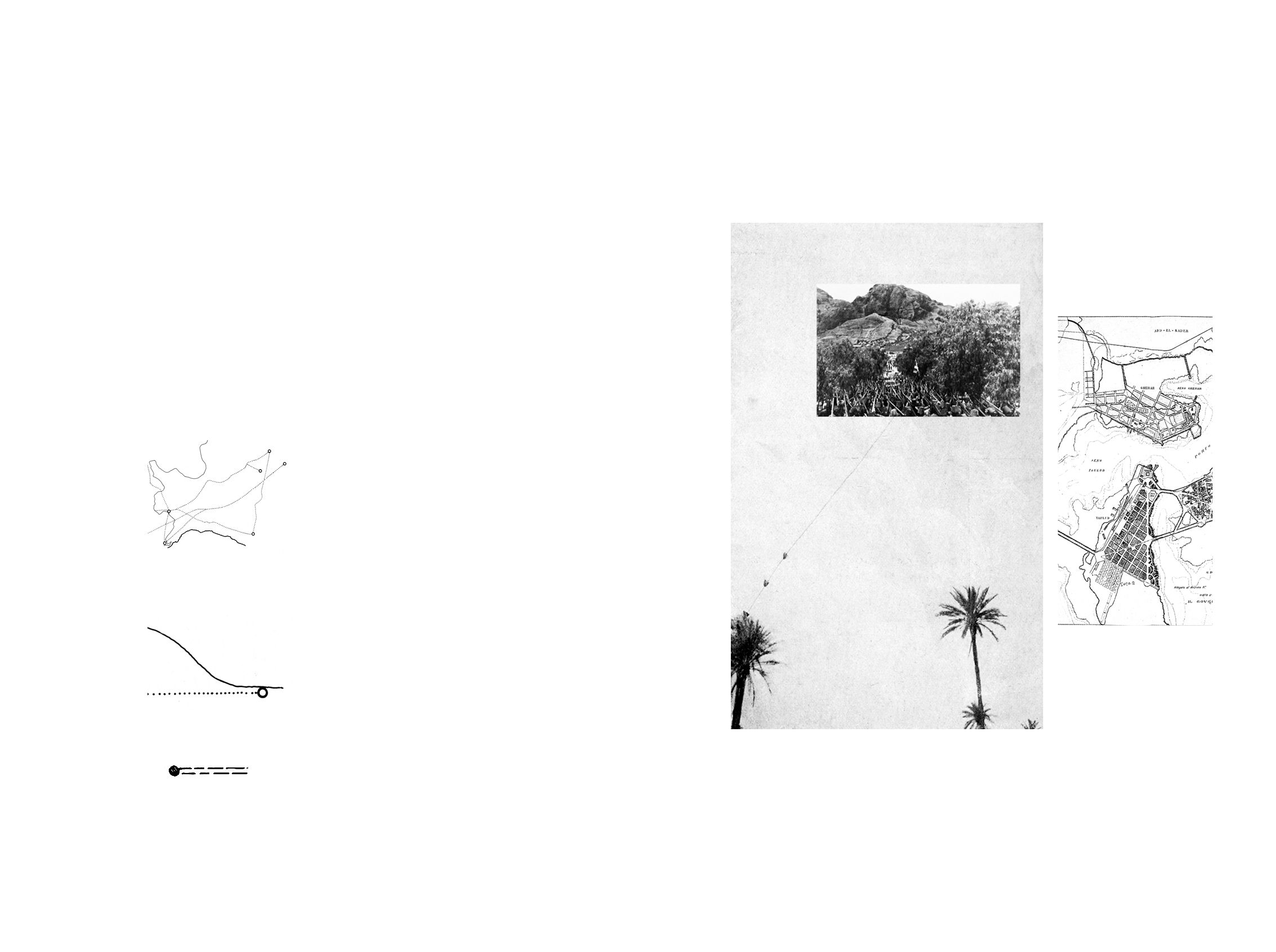 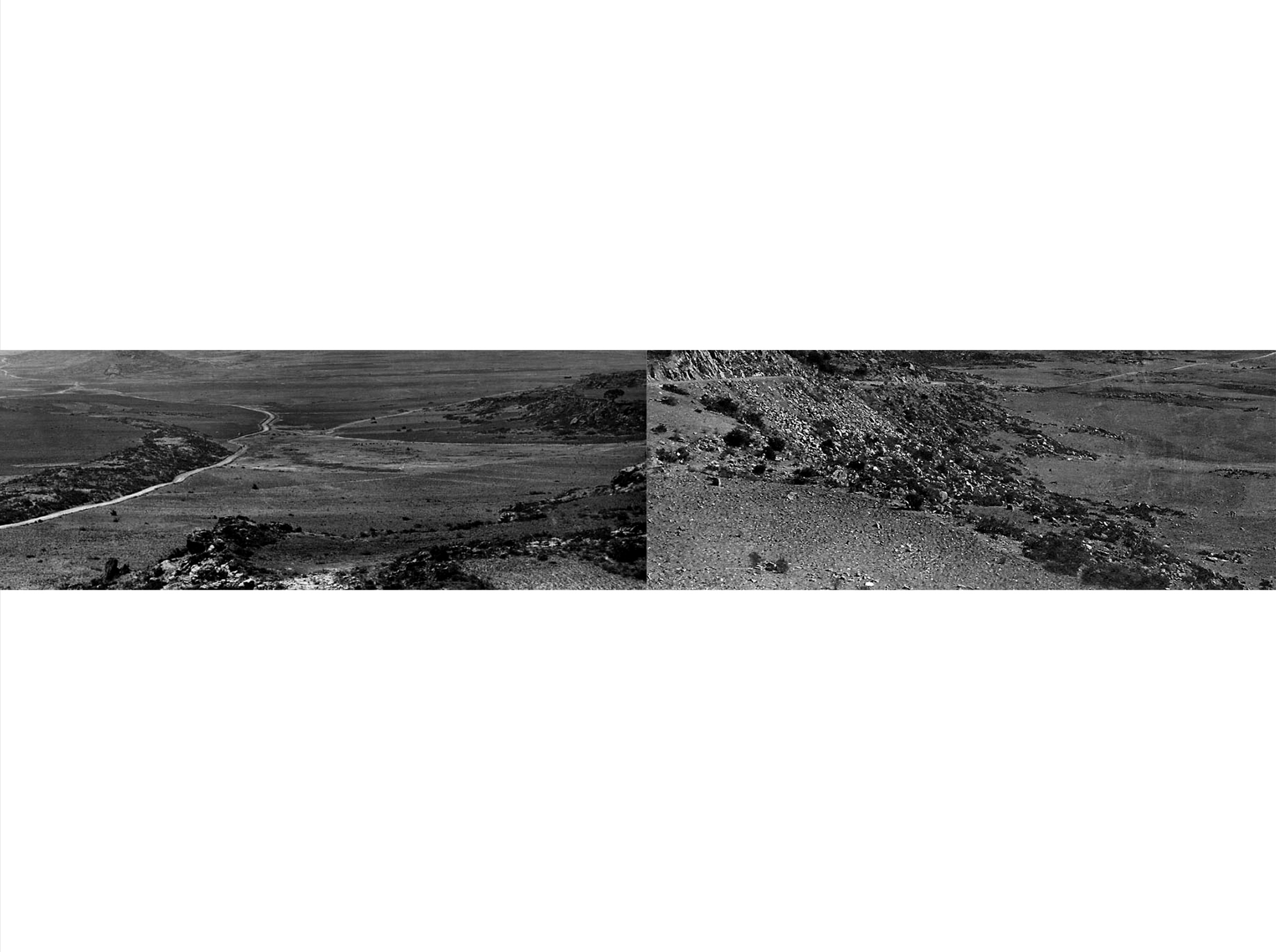 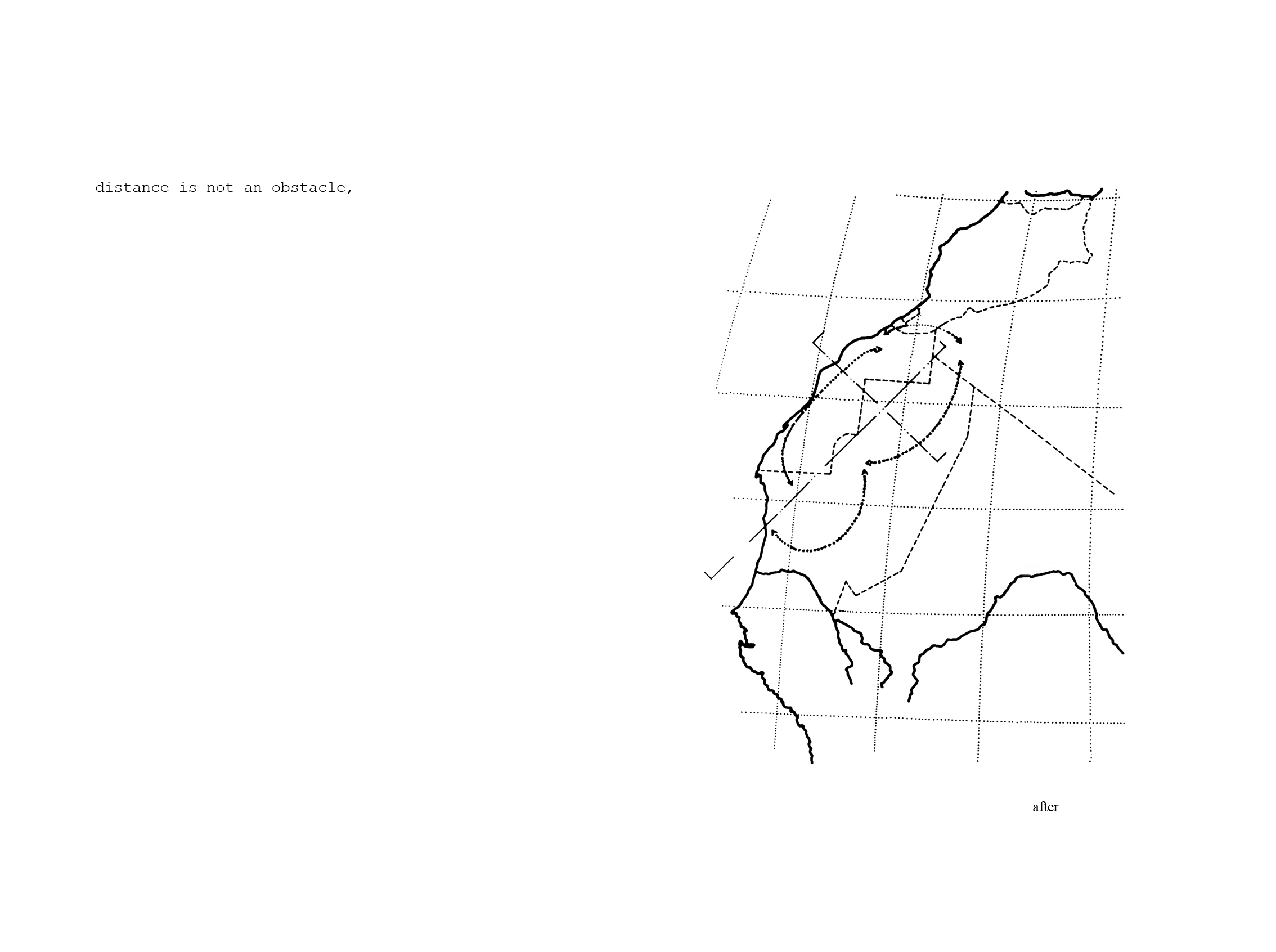 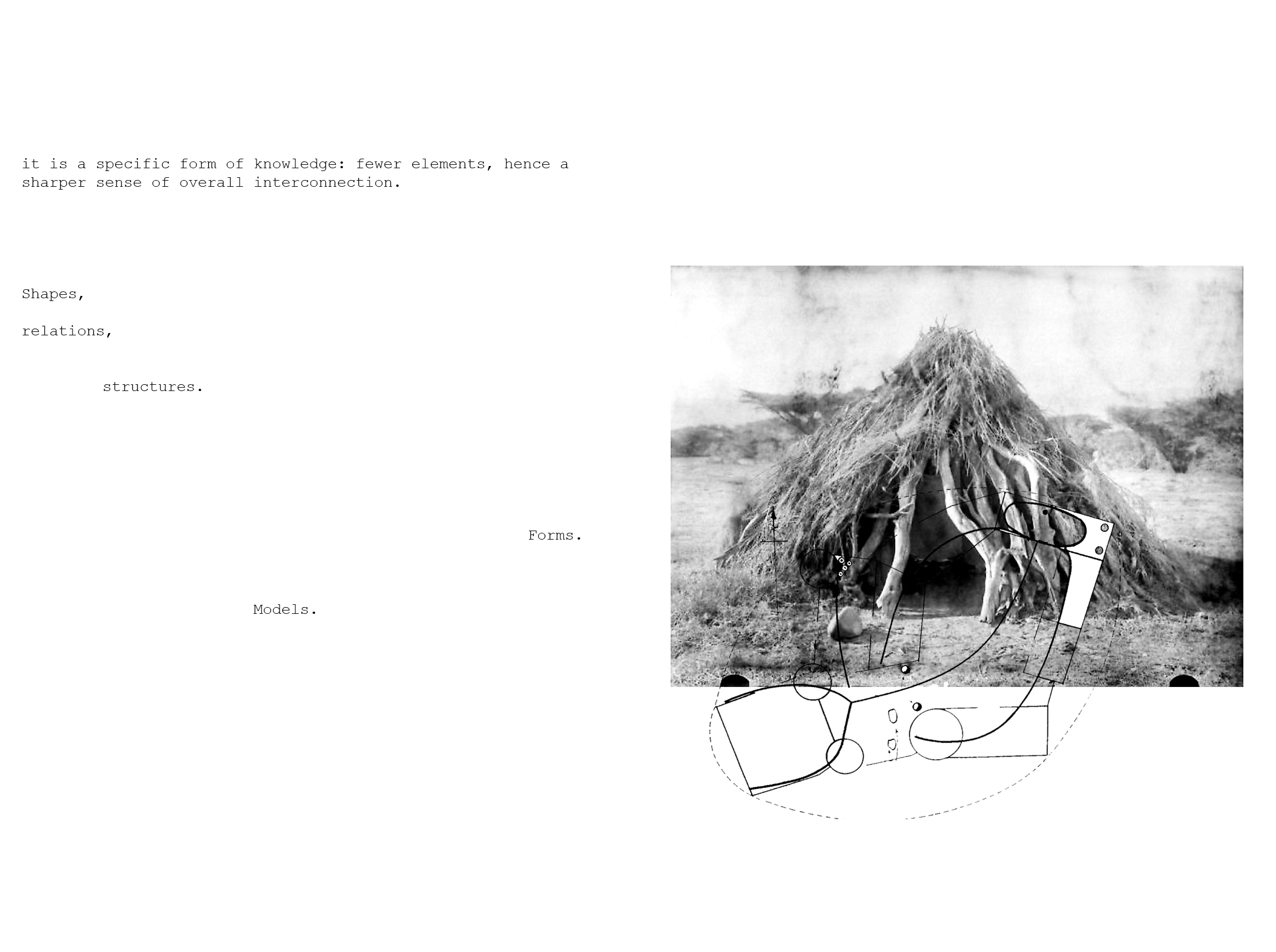 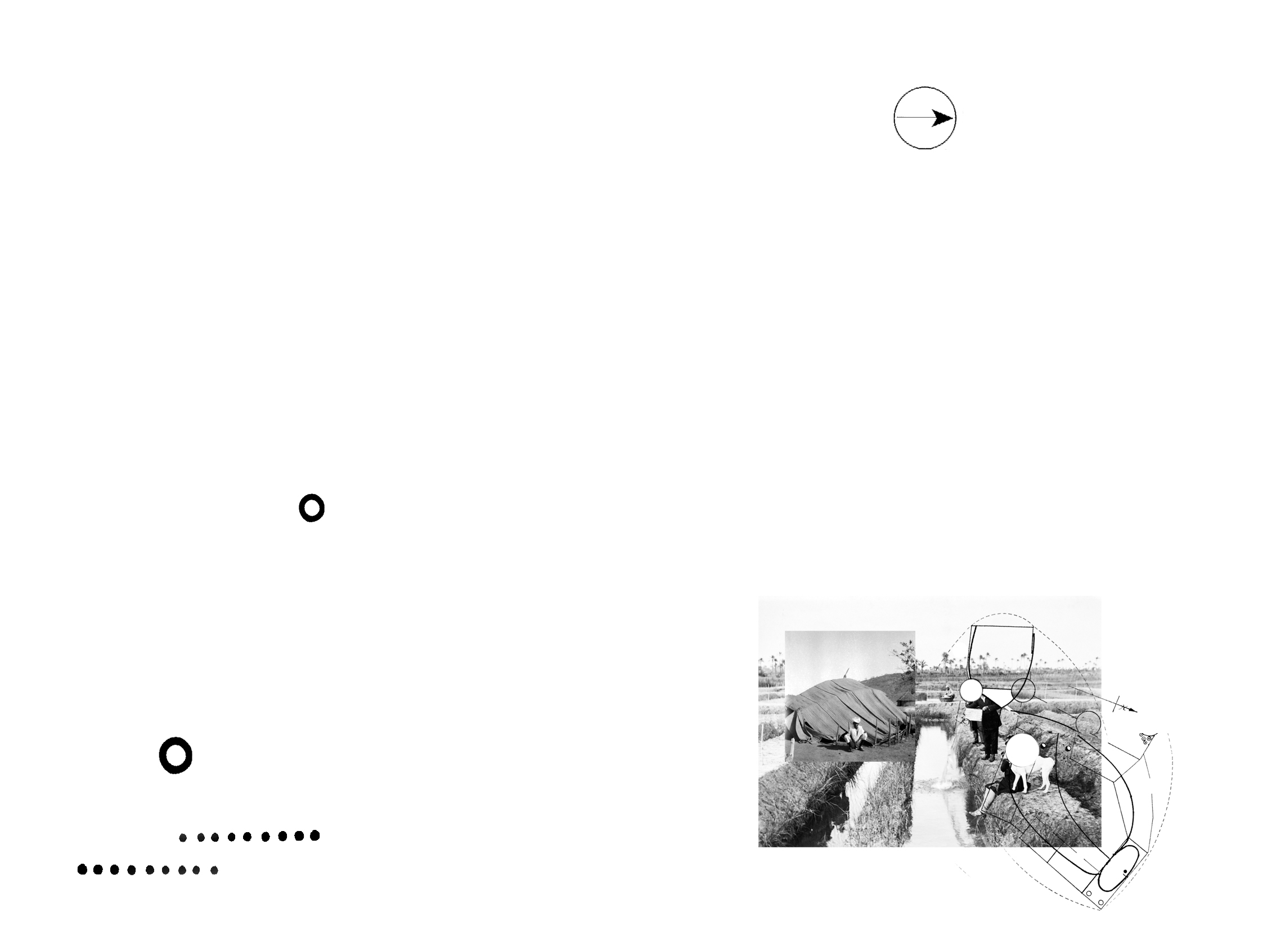 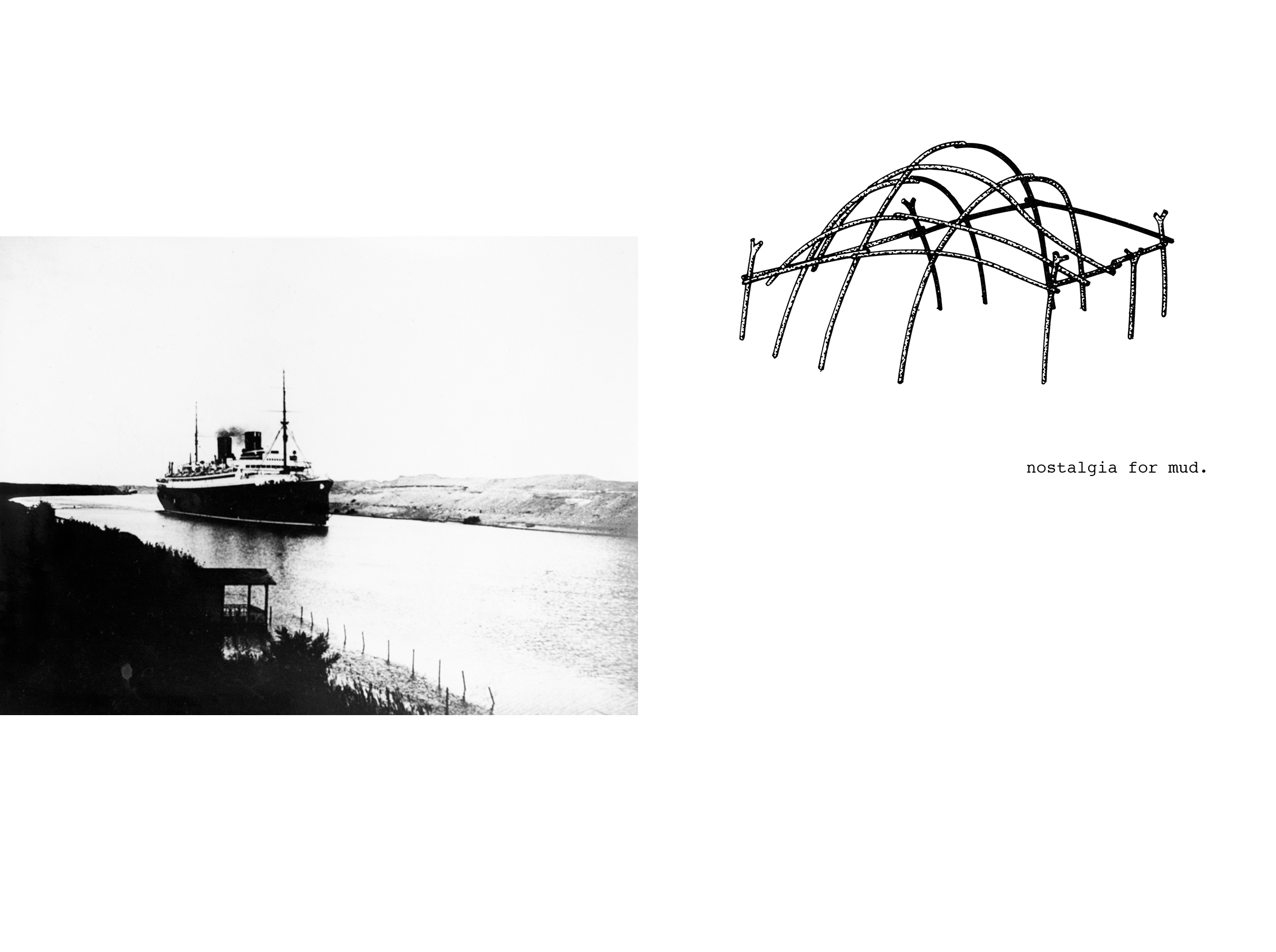 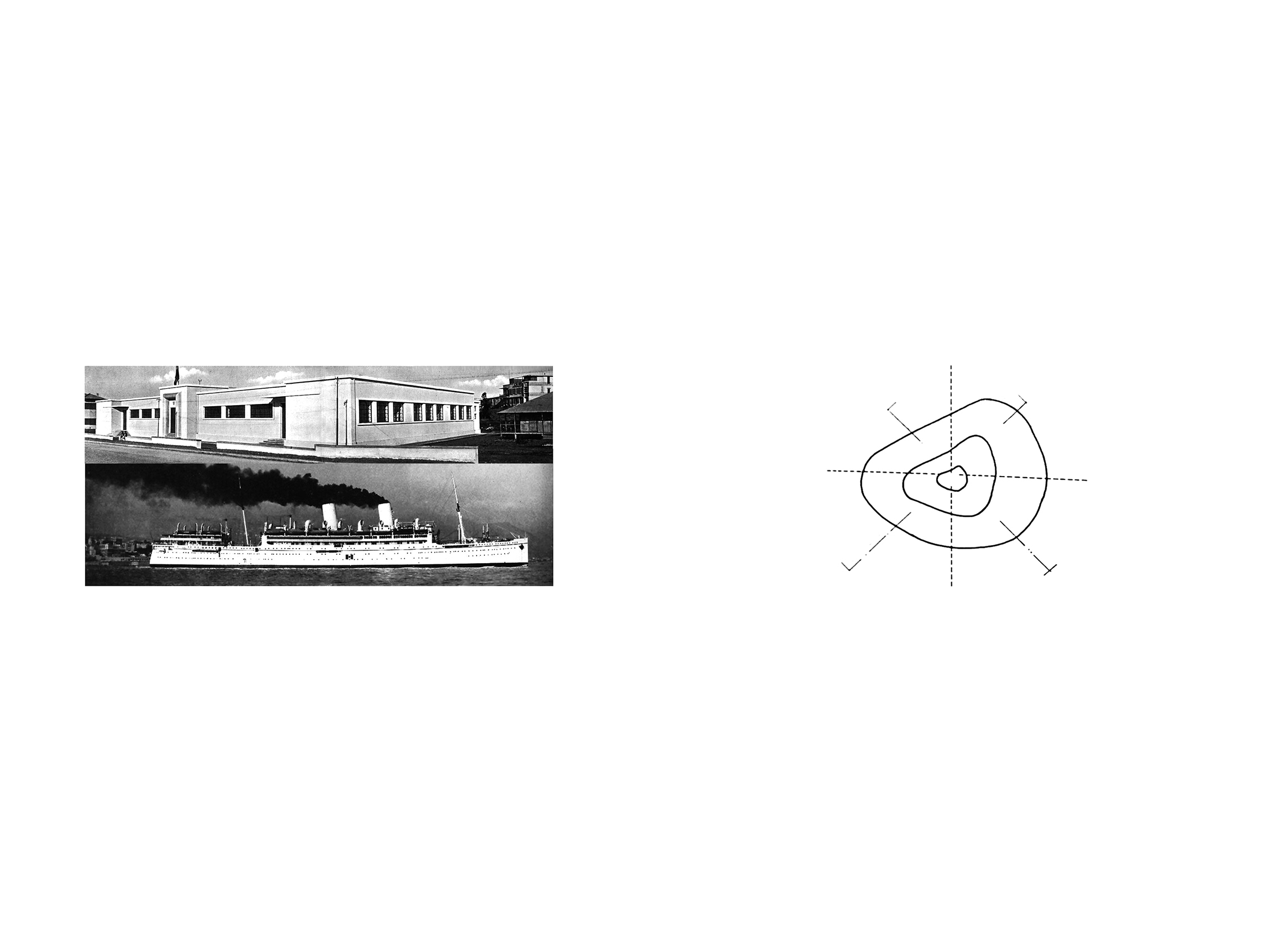 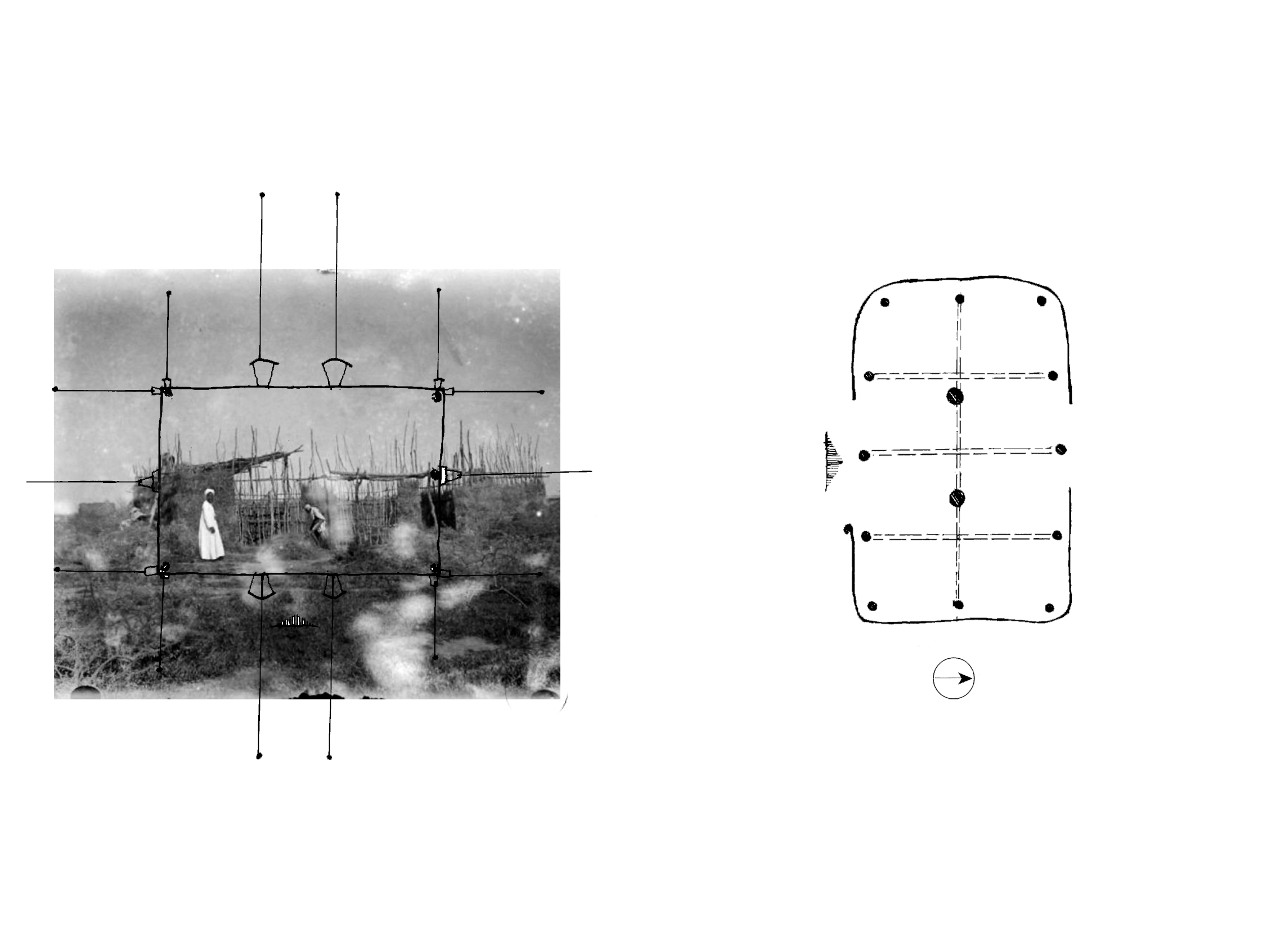 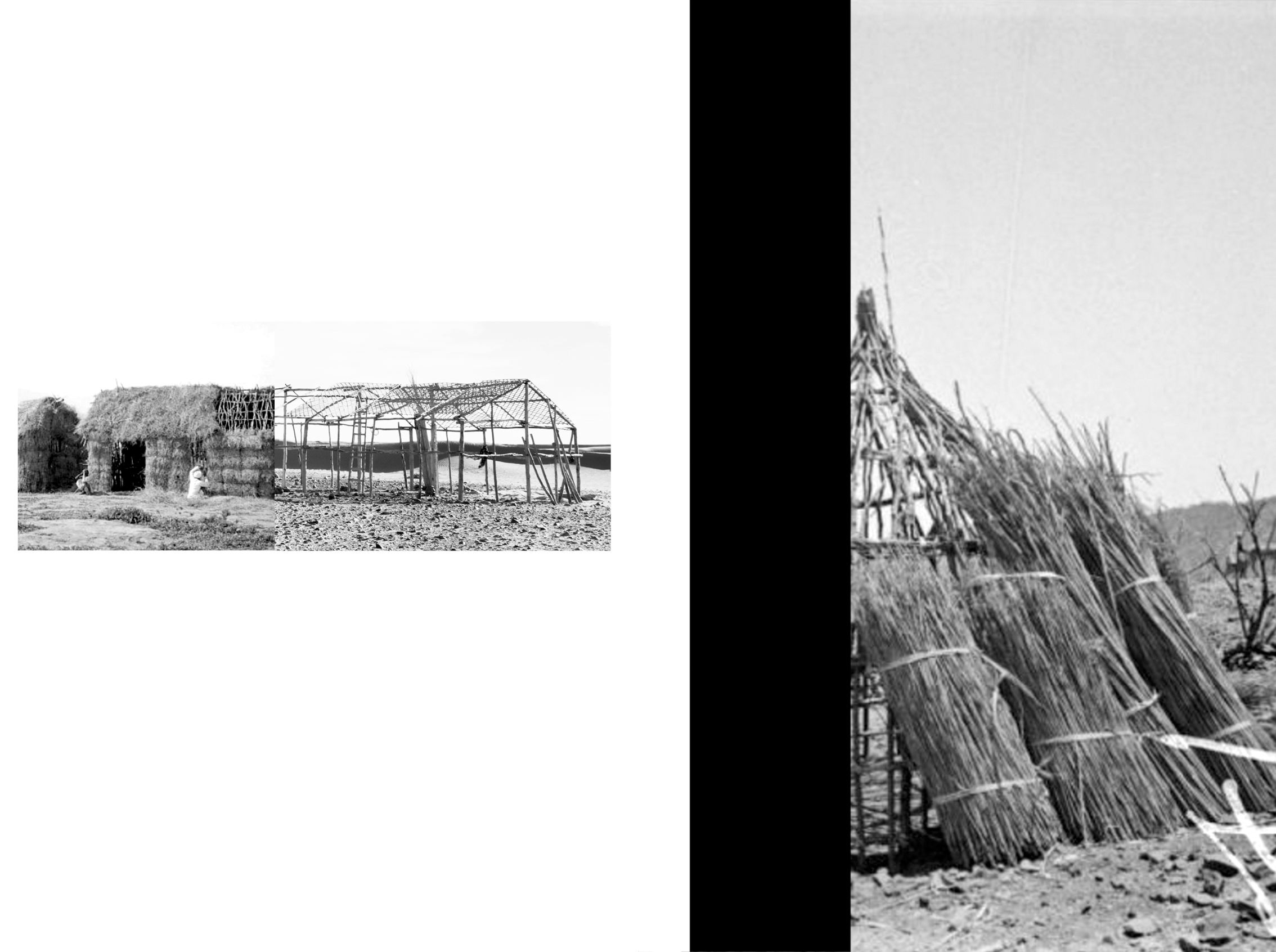 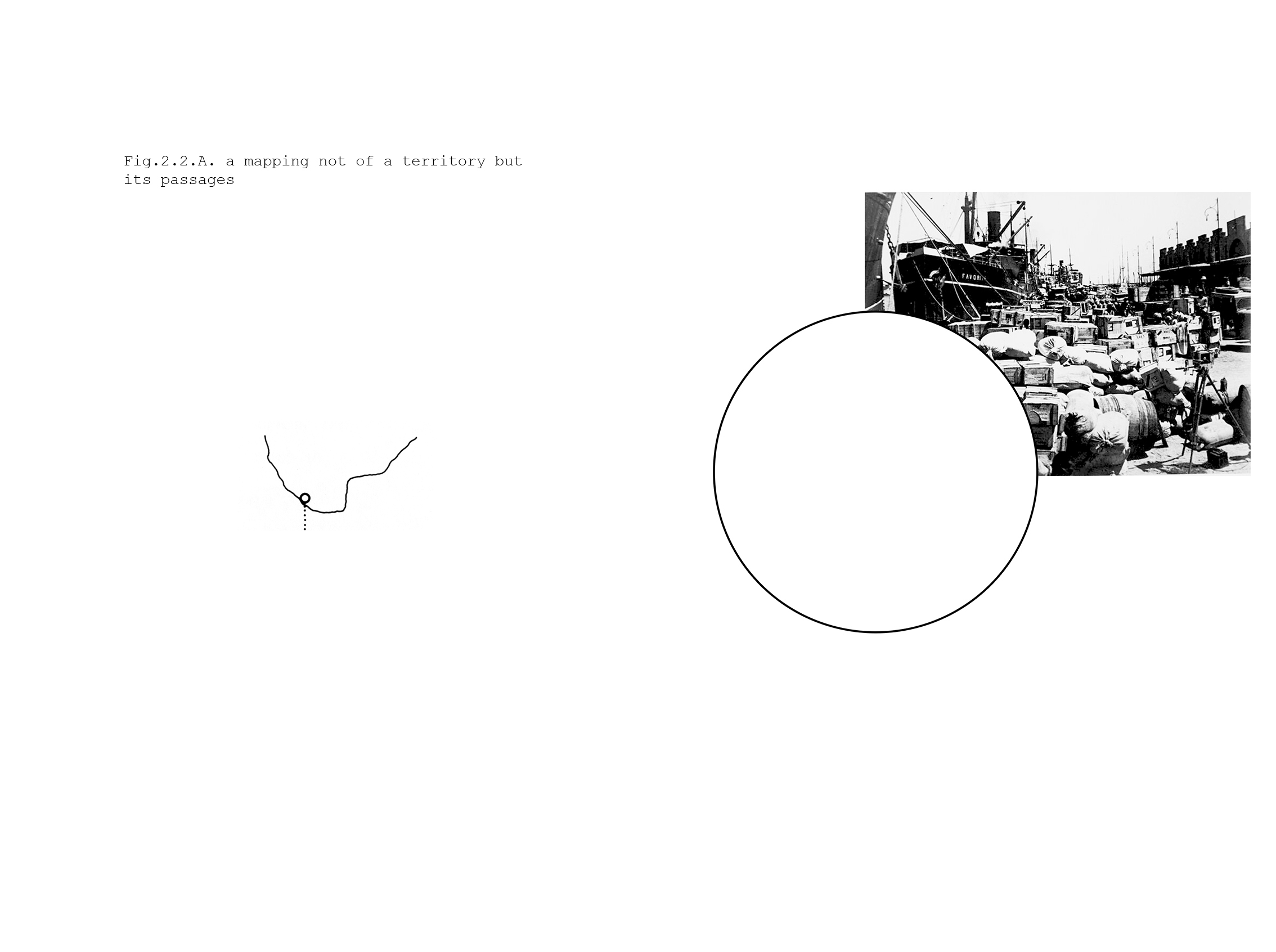 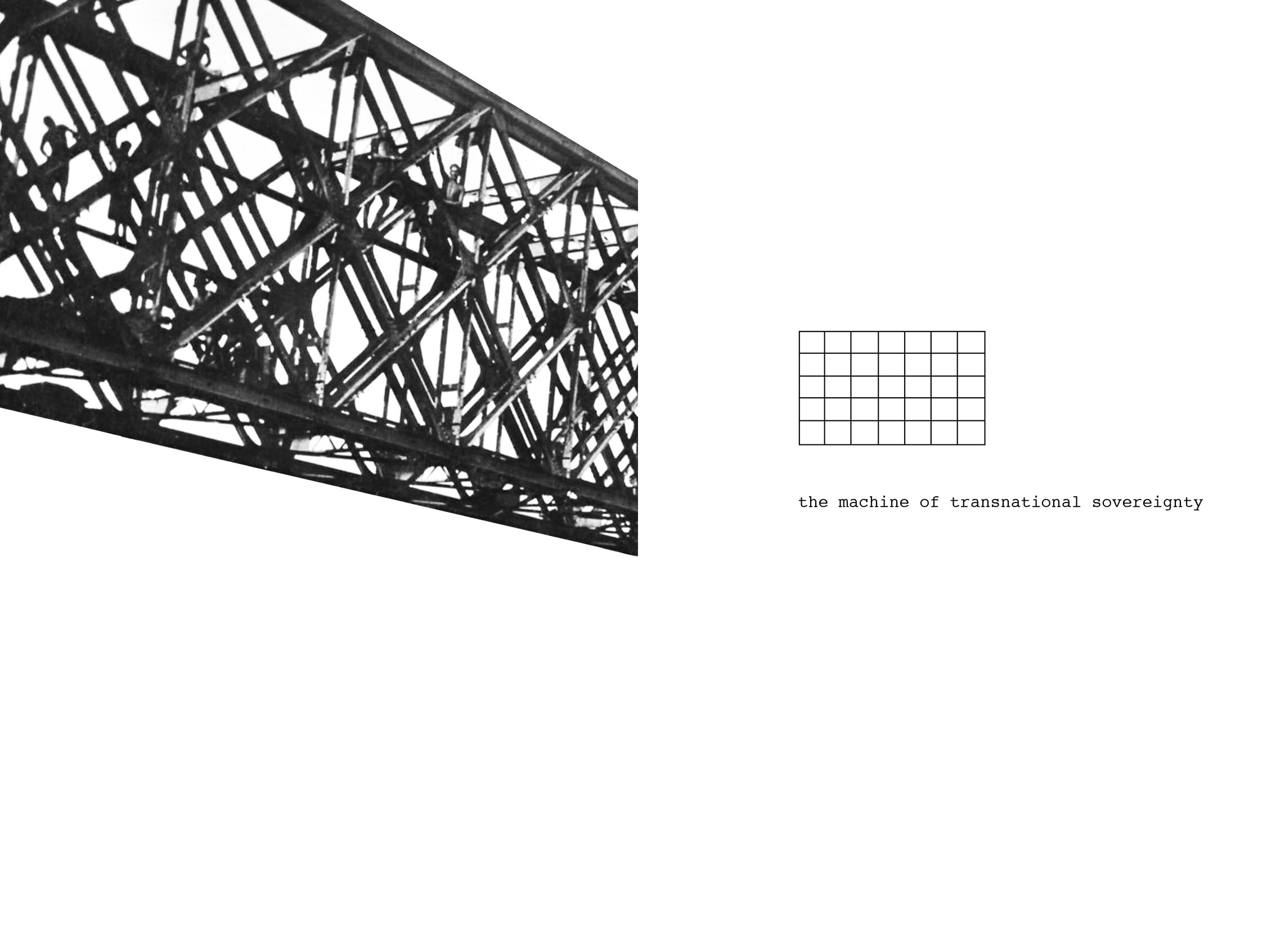 “[T]o write is, of course, to travel.” Iain Chambers

Art is the other of power. It represents the incessant reluctance to conclude and accept the present state of affairs: it is a refusal. The present always engages the past where histories of that past are as potent when they are repressed as when they are revealed.

What one encounters in this series of visual compositions is a particular semiotic logic that privileges fragmentation and disassembly. We draw from images based in archives and libraries of Italian geographical surveys, histories of colonial architecture and studies of nomadic architecture and space in North and East African landscapes. The built forms of Italy’s colonial landscape hinge on principles of stability and permanence while the architectures of African nomadism operate on tenets that stipulate location as a series of variable relations. There are multiple meanings to be extracted in the tensions that operate between instances of historical stasis and transiency which, in turn, define and shape contemporary events. The project privileges forms of ideological and aesthetic operations that unfold in fluid fields of possibility. Therefore, we speak of a migration of images, to do so is to account for the ways in which images themselves travel from one location to another. Sometimes images establish connections and remain rooted, other times they move on like nomadic structures. Our project is modeled on architectural drawings, new notations that propose imaginations of place and subsequent ideological and aesthetic operations.  It addresses the realm of tangible proofs through historical images by using the archive as a departure from the ephemeral.

In late 2015, we founded the Black Athena Collective, a research and artistic laboratory for experimentation that engages political discourse and practices of spatial construction connected to the Red Sea region from Eritrea to Egypt. The collective was born out of a need to address mobility as a crucial principle for structuring new approaches to territorial convention, citizenship and politicization. Through multi-disciplinary perspectives including geography, sociology and history, the Black Athena Collective addresses the dominant territorial logics and constitution of place versus the transience of individuals; it looks specifically at architecture(s) in relation to errant bodies. Architecture, in this case, is considered in terms of wider ethical and political principles.

The collective draws from challenges posed by Martin Bernal’s thesis which questions methodological assumptions embedded within Western historiography. We are specifically interested in confronting the Euro-centric bias of landscape discourse: “[i]s it possible that landscape, understood as the historical ‘invention’ of a new visual/pictorial medium, is integrally connected with imperialism?”.  Our approach opposes the predatory view of landscape discourse, especially within the context of colonialism on the African continent. Rather, a new discourse on visual responses to landscape of the region is necessary, one that does not engage the continent as a fixed category but rather as an uneven and entangled terrain where conceptual operations are assembled and contested. We speak of a migration of images and their constructions as transitory forms moving across ‘bounded’ spaces. Can our methodology allow us to achieve more complex and definitive ways of thinking and interacting with land?