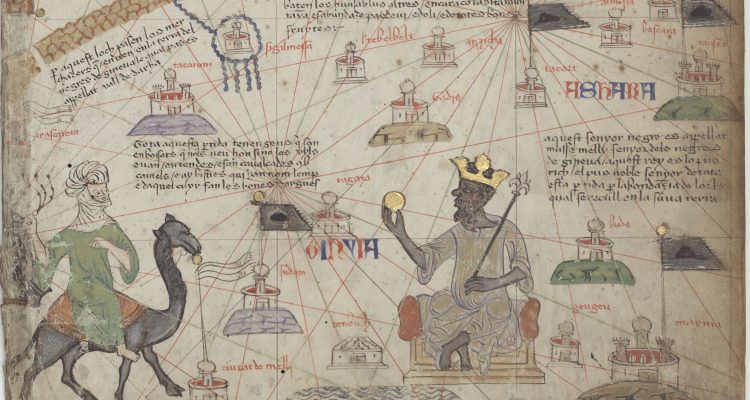 “When I was young, there was a gas station next to our house. From time to time, especially during holidays, my father would bring food to the station workers. One of the employees wore a shirt with the inscription ‘Africa,’ illustrated by a map. One day I asked my Dad ‘what is Africa?’ He told me that it was the continent where Morocco lies. I didn’t understand the term ‘continent,’ I only knew the map of Morocco. No one ever spoke to me about ‘Africa’ and his response remained totally incomprehensible to me.” This text accompanies Africa As They Like It, a 2009 drawing by Simohammed Fattaka that features a map of Africa, overlaid in undifferentiated black and from which a part is missing—the area north of the Sahara. A few years later a lot of people in Morocco are speaking about Africa. On the one hand, Morocco is embracing the continent as a major new site of economic investment and political influence. On the other hand, the European Union having effectively subcontracted control of its southern border to North African countries, many exiles from West Africa get stuck in Moroccan cities and forests, unable to cross further into Europe, and end up scrambling to make a life in their new circumstances. The increased visibility of black bodies in Moroccan urban spaces has come with well-documented verbal and physical violence against them[1]. Among these the most benign, which consists in referring to them as “the Africans”, may also be the most revealing.

In New York the other day someone casually asked me: “Is Morocco in Africa? I thought it was in the Middle East.” I had never thought of it in quite those terms, but they seemed rather apt at capturing an enduring reality. Language affects our perception of geography and molds our modes of identification. In trying to define an area of belonging one is pulled between competing logics: territorial, political, cultural. But why should Africa and the Middle East exclude each other?

In the 1940s and 50s, the Moroccan nationalist movement insisted on presenting a unified front in the struggle of liberation from French occupation. Since then, by way of educational system and media infrastructure, Moroccans have consistently been talked into believing they are Arabs and Muslims, to the exclusion of other allegiances, chief among them the Amazigh/Berber and the African. This is as true of writers or intellectuals as it is of anyone else. Take the beginning of a 1991 interview with Tahar Ben Jelloun.

Q: As a Moroccan, do you identify yourself as African? Do you view Morocco as African?

A: No. In Morocco one tends to feel more Arab than African. We’re really in the northernmost part of Africa and we have a very different history. Personally, I don’t feel at all African. That’s not a pejorative or mean statement, but I don’t feel African because I have no ties to Africa[2].

From the point of view of Arab identity, Africa appears as a site of dis-identification, perennially Other[3]. Ironically, this form of self-denial stems from a colonial writing of African history, or what Ngugi wa Thiong’o refers to as the planting of Europhone Memory on African bodies. European memory is Africa’s amnesia. Colonization is inseparable from forms of knowledge production founded on classification and compartmentalization of peoples, ethnicities, and languages. The French, in particular, were keen to segregate what they called “White Africa” from what they called “Black Africa”, Arabs from Berbers, orality from written culture, etc.

One striking feature of (North) African amnesia is a widespread vision of the Sahara as uncrossable border—an immense barren barrier separating two worlds, regardless of the long centuries of circulation of people and goods and knowledge through the desert. Pre-colonial European penetration into the continent was key in gradually dismantling the existing network of trans-Saharan routes and substituting intra-African exchange for allegiance of each African entity to its European colonizer. Since then contact between Africans has often relied on European mediation.

To be sure, the erasure of the caravans’ traces in the desert is convenient for who wants to forget the painful history of the trans-Saharan slave trade, which lasted for many centuries and on which North African households, armies, and economies heavily relied. Trans-Saharan slavery, which continued well into the 20th century in both North Africa and the Middle East, remains a taboo in Arab societies, and has been little studied in Western academia[4]. Today’s migration to the north across the desert, reactivating long forgotten routes, thus appears as the disquieting return of a “historical repressed”.

In this context, the opening of a slavery museum in Qatar is a remarkable event, a rare example of institutional reckoning with a painful history and its ramifications into the present. In his contribution, historian Justin Stearns recounts a visit to the Bin Jelmood House in Doha, which he undertook in the company of his students.

NourbeSe Philip retells a harrowing encounter she had with racism on her recent first trip to Morocco. In so doing, she considers the ways in which history repeats itself and materializes in concrete situations. She highlights the embodied knowledge of the oppressed in the face of the prescribed roles they are pushed into playing.

The Black Athena Collective embark on a visual exploration of liminal spaces, focusing on the history, geography, and architecture of Eritrea and the larger Red Sea region. Considering migration as a “home in mobility,” they reconfigure transitional territories via collages of words and images. In the horizontal scrolling of their image compositions is a narration that attempts to preserve itself from the reassurance of a clear context and to suggest what “a non-predatory view of the African landscape” might look like.

In narrating some of his experiences as a writer-in-residence in Rabat, Emmanuel Iduma evokes the lives of Nigerians in Morocco, as well as the disquieting experience of living in a place whose languages one cannot speak and where one’s skin color can be cause for trouble. In this context, fleeting moments of solidarity—a glance, a handshake, a confession—acquire heightened importance.

[1] Doctors without Borders: Violence, Vulnerability and Migration: Trapped at the Gates of Europe (March 2013). Downloadable at www.msf.org/sites/msf.org/files/migrants_in_morocco_report.pdf Subsequent to the publication of this report, Doctors without Borders announced a definitive withdrawal of their teams from Morocco.

[3] This modern, post-colonial othering, uncannily echoes the early encounters of Arabs with unknown territories south of the Sahara: “From Sijilmasa to Awdaghust is two months’ journey in a westerly direction. It [Awdaghust] is situated obliquely opposite to the Farthest Sus as though Awdaghust and the Sus formed with Sijilmasa a triangle with two long legs, its shortest side being from the Sus to Awdaghust. Awdaghust is a pleasant town, and of all God’s lands it most resembles Mecca and the town of Jurzuwan in the district of Juzjan in Khurasan, because it is situated between two mountains intersected by ravines.” In Ibn Hawqal (10th Century), Kitab Surat al-Ard, ed. J.H. Kramers. Leiden, 1938-39, vol. 1.

[4] “One reason for the comparative lack of study of the question of Africans in slavery in Muslim societies has been the lack of interest in the matter in the American and European academy. The principal reason for this seems to be that such studies invite the researcher to cross the established boundaries between African Studies and Middle Eastern Studies.” (John Hunwick, “The Same but Different,” in Saharan Studies Association Newsletter, December 1999, p. 4).