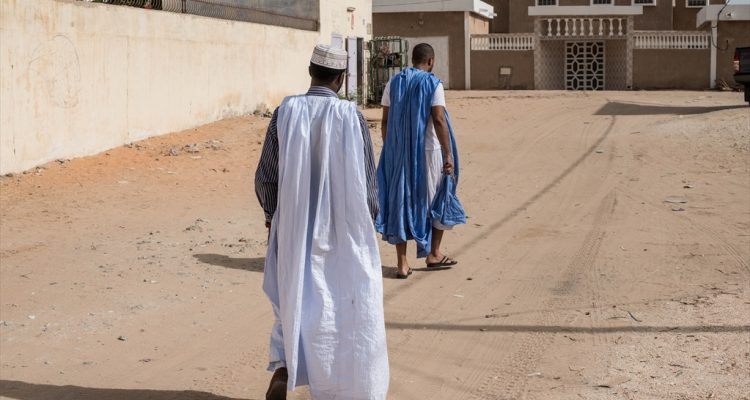 Emeka Okereke/Emmanuel Iduma, from the series "A Walk in a Draa", 2014.

That late afternoon in a restaurant, a woman sat facing me.

I’ll like you to keep in mind, as a necessary preface to this account, the loneliness that occasionally overwhelmed me towards the end of my stay in Rabat. Contrary to what I hear from people who encounter loneliness in a foreign country, for me the days passed quickly. Such fleeting passage of time intensified what I felt during each bout of desolation.

When the woman sat, I’d ordered a plate of spaghetti, with prawns. She began to speak in French. I nodded in the negative. Saying something like “you African?” she switched to English.

“Can you buy me sandwich?” Her request lacked the apologetic furnish of a needy person.

I said yes, compelled to engage in small talk, and by her effrontery. She motioned to the waiter, who strutted towards us half-heartedly, and placed her order. I do not remember exactly how she looked, whether with spots on her face, or sagging, middle-aged skin. Or what gave her eyes, when I sought them, an absence of allure. I remember an older, unattractive woman.

While we waited for her sandwich she asked me questions.

“Where are you from?”

“Many people from Nigeria come here and suffer. The government treat them badly.”

I must have smiled.

“Do you have a house in Rabat?”

“Is someone staying with you?”

When I lied she seemed happier, suddenly evasive, extra courteous.

If she were a younger woman would I have reacted differently?

I’ve told no one this except you, dear photo lover.

In the market, which seemed at the edge of the city, while I walked with Etuka, I recall seeing bound, dying sheep. The image has become unsettling. A sheep falls on its back. A trail of bloodstained mucus has formed around the corner of its mouth, urine sputters from its bladder, and it taps its hooves incessantly. Everywhere I turned I imagined sheep constrained in this fashion. Only bloodied futures.

Although I’d walked through public places throughout my stay, most of my excursions took place within the city, amidst its boulevards and crowded cafes, beside lovelorn couples, within a throng of people whose cosmopolitan anxieties resembled mine. In my walk with Etuka, however, I felt queasy—like a body with open, vulnerable pores. It was a poorer neighborhood.

Etuka wanted me to feel that, stripped of privilege. “I’ll show you how Nigerians live in this city.”

There was a house we came to, four or five floors up, with barricaded verandas. With dim, narrow, and winding stairs.

“You must behave normal when we get up there. They must not suspect you. You’re with me, and we’re here to relax.”

“Except you were black you can’t go in there. Otherwise you deserve whatever happens to you. Even death is possible.”

“One of our Nigerian sisters is in jail now. Her Moroccan landlady is troublesome. One complaint after another. One day our sister got into a hot argument with the landlady. She pushed the landlady to the ground. Just a mere push. Do you know this landlady collapsed right there and died? The police came and arrested our sister and her husband, but the Nigerian community managed to get the husband out. The matter is in court.”

Etuka knocked and a young woman let us in through the kitchen. Its windowsills were crammed with bottles, tins, and condiments wrapped in little plastic bags. A steaming pot sat on a gas stove, unwashed for months, perhaps, even a year. The young woman looked at Etuka, then at me, impatiently, as if constantly impeded by visitors our type.

She remained in the kitchen and we walked into a sitting room with several people, up to seven or eight in all. Young men, young women. The women mostly wore shorts or tights. They were curvaceous, but their voluptuous bodies bore marks of frequently overused whitening cream. The men appeared consumed by lust and addiction and hustle, whether they bore a girl on their lap, smoked weed, or discussed in varying degrees of enthusiasm about recent events.

There was a child grasped hurriedly by his father when he toddled towards the flitting faces on the TV. Etuka and the man shared a cordial hello. He smiled sweetly. A moment later he barked stern orders at the woman who’d let us in. A man in control. But he was lithe, youngish-looking, and his hair was groomed.

“He runs this place with his wife. They own the girls.”

Etuka ordered Monkey Tail, twice. Gin mixed with marijuana I’d heard of in Nigeria, but never drank. You mixed it and kept it for more than 20 days before drinking. Each cup was sold for about 5 dirhams. While he drank he got into an argument with one of the young men, both speaking in Igbo. There seemed to have been a misunderstanding. The man had asked Etuka for a phone number which wasn’t sent. Now they debated how fair this was. Had Etuka done enough in the past to prove he was capable of looking out for a fellow Nigerian?

“You see that boy back there, don’t mind him. He wanted me to get the phone number of a drug dealer for him. I don’t want to be involved in that kind of shit. I can’t help him ruin his life. If he wants to get in trouble I have no business with that.”

On our way back he asked me, again and again, “What did you think?”

Etuka told me a story of himself several years earlier. “I was trying to make it to Europe. But then I came to Rabat. Imagine this. I had been begging on the street for weeks, and then one day I walked past a bank building. You know how the buildings are covered in glass. When I saw myself I stood there to cry. Is this what I looked like? I hadn’t looked at a mirror in months. Maybe even a year.”

In Tangier Yto Barrada introduced me to Mohammed Serifi Villar. His ideas thrived on nuance.

Tangier was racist, considerably. But up to seventy percent of the migrants lived off alms, right off the streets.

He wore a white shirt, open till its fourth button, revealing tanned, healthy skin. I recognized him because Yto had shown me his photo on Google. But he hugged me only after he’d dialed my number, seen my phone ring. His hug was tight and intimate and quick.

Without George Bajalia the conversation would have been impossible. They spoke Moroccan Arabic. Serifi faced George while he spoke, usually for more than a minute. Then George would turn to translate, paraphrasing and elaborating. Sometimes, depending on the urgency of the idea, or the improbability of translation, Serifi turned to me, beginning a sentence in English. Unable to continue, he’d switch to Arabic mid-sentence, facing George. During the brief moment when he faced me, I’ll perceive, in the movement of his eye, that he thought I understood without translation.

Once, he held my hands, across the table. So firm I winced before smiling. He held me to illustrate a point. All humans are the same, regardless of color. We’re animals in our instincts. We try to survive against all odds.

When he was a boy, the poor son of a fisherman, he’d scratch surfaces to find food. He said this with his fingers moving on the wall.

He now worked with Grupo Alianza contra el racismo y la xenofobia de Tánger. Earlier, Yto told me, he was a political prisoner, and then a member of Tangier’s Chamber of Commerce. There were indications of the diversity of his allegiances: he spoke convincingly, his hug was immediate, and he walked out of Cinémathèque de Tanger where we met without turning back. He was simultaneously open and clandestine, generous and cautious. Not cautious as one who withheld information. But giving the impression that he could anticipate all my questions, then answer them.

I looked at French words to guess their meanings, but there were times I faked understanding. When I regularly went to Pause Gourmet for salad and café au lait, I would say yes to everything, hoping the question posed required a yes or a no. All my yesses were indicative of a larger paranoia, that of being marked as a clueless stranger. What the hell was a person who didn’t speak French or Arabic doing in Morocco? Sometimes yes would be inappropriate, or insufficient, requiring a modification. The waitress would immediately perceive my limited understanding, and ask for what I wanted in a clearer, drawn-out way. Again, I’d nod, suggesting finality with a smile. Usually, that settled things.

Or when Khadija rang the bell of my apartment. I dressed quickly and went for the door. She was mopping the floor, a middle-aged woman, and began to speak rapidly in French when I appeared. I perceived she was talking about her work in the building—travail, ici. My nods were tentative, speculative. She didn’t seem to mind. She wanted to exchange numbers. If I wanted any help with the apartment I could call her. She left and returned with her number on a small piece of paper, written in blue ink. Also, a small piece of paper for me to write mine. When I gave her my number she asked if it was okay for her to call me. Of course, I said.

Or when a man came from the hotel to take me to a new apartment. The agreement was for me to stay in the first apartment until the new one was ready. He came to take my bags, explaining this with gestures and limited French. Frustrated by our translation problems, he asked if I spoke Arabic. No. From then on he seemed impatient, and yet subdued—almost rash in the way he suggested what he meant by lifting things and moving them before attempting to communicate where we were going.

After regular visits to Pizza Zoom for lunch and dinner, it seemed I was marked alien. I perceived—perhaps by dint of exaggerated self-importance—that I was the subject of fleeting discussions in the kitchen. Waitresses and their male colleagues recounted their encounters with me—he nods to everything, he wouldn’t pronounce “brochette” correctly, he always reads an English book. English is my fate here. The cashier, once when I tried to pay for my meal, switched to English to confirm what I’d had. I responded enthusiastically. Thinking, “finally.”

My language deficiency is like a veneer, like gauze, like stratum. Underneath is tangible communication, out of reach. Yet I do not bemoan this. My deficiency is benign in comparison. For migrants arriving in Morocco from countries south of the Sahara, who have to make a living, or wait almost interminably for a better life, to acculturate is to survive. Without the knowledge of French or Moroccan Arabic they face the belligerent wall of inadmissibility.

If unlike me you aren’t a visitor, I imagine how the inability to speak the language of a place confines you to the fringe. Being marginal—that feeling raised to geometric proportions.

There is a saying, “Who no go no know.” You only know because you go. You go in order to know.

At the base of my mind formed the vision of an unhampered stranger, traveling to the other end of the world. My disconsolate self wouldn’t allow that. For in Rabat, dearest photo lover, I was everything but, hesitant and restrained, unaware and perturbed.